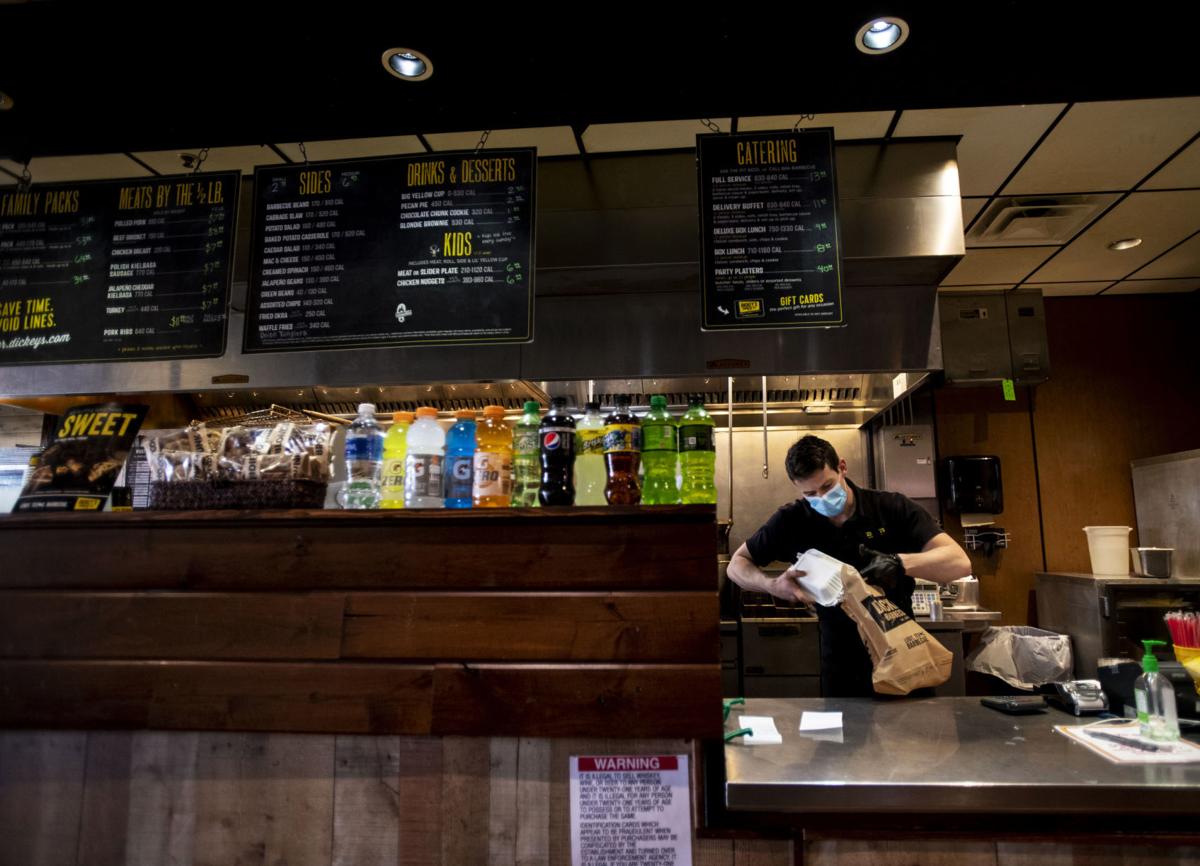 Sam Sturdevant, general manager at Dickey’s Barbecue Pit, gets together a pickup order at the Garden of the Gods Road location Thursday in Colorado Springs. Colorado’s restaurant industry continues to be affected by rising numbers of layoffs and plummeting sales because of the COVID-19 pandemic, according to a new survey. Restaurants are expecting the reopening of their dining rooms in mid-May. 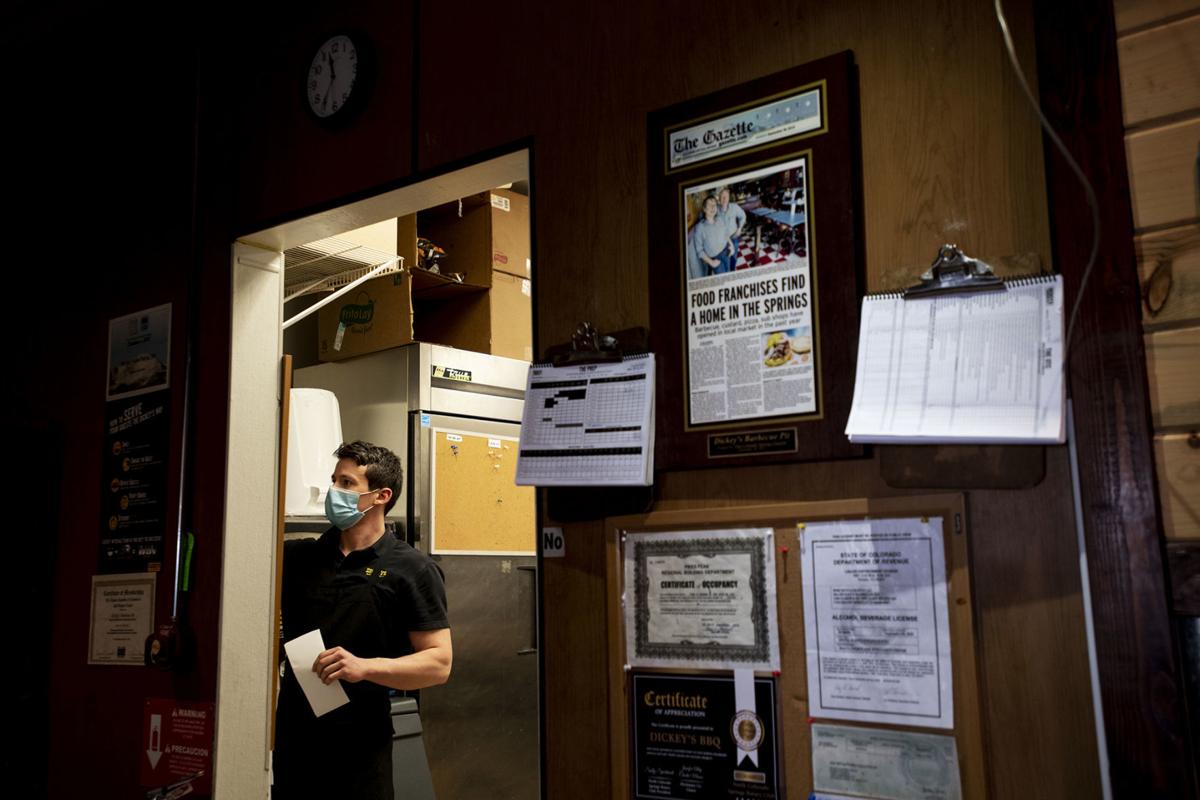 Sam Sturdevant, general manager at Dickey’s Barbecue Pit, gets together a pickup order at the Garden of the Gods Road location Thursday in Colorado Springs. Colorado’s restaurant industry continues to be affected by rising numbers of layoffs and plummeting sales because of the COVID-19 pandemic, according to a new survey. Restaurants are expecting the reopening of their dining rooms in mid-May.

As new surveys show layoffs and lost sales continue to hammer Colorado’s restaurant industry because of the COVID-19 pandemic, some local restaurant owners say they’re hanging on as they await the expected reopening of their dining rooms in mid-May.

Based on the April surveys, the National Restaurant Association estimates more than 173,000 of Colorado’s restaurant workers have been laid off or furloughed — nearly three out of every four of the 235,800 servers, hosts, cooks and others who were employed at eating and drinking establishments in February.

“We believe the situation can get worse,” Sonia Riggs, the Colorado Restaurant Association’s president and CEO, said via email about layoffs. “Our current survey data suggests that the more time dining rooms are closed, the more restaurants will consider temporarily or permanently closing; if they’d been operating for to-go or delivery, that means they’d lay more people off.”

Gov. Jared Polis on March 16 ordered restaurant dining rooms to close to help stop the spread of the coronavirus; in turn, many restaurants slashed jobs and saw steep declines in sales as they were limited to offering carryout, curbside and delivery service.

Other takeaways from the restaurant surveys include:

• Nearly all — 98% — of Colorado restaurant operators say their sales volumes from April 1-10 declined over the same period in 2019. On average, sales during April’s first 10 days fell 76% on a year-over-year basis.

• Colorado’s restaurant and food service industry will lose more than $975 million in sales in April if current trends continue through month’s end, the National Restaurant Association estimates. A previous survey showed an estimated $465 million in losses during the first 22 days of March.

• More than half of Colorado operators — 53% — say they temporarily closed their restaurants since the coronavirus outbreak. Another 2% say they’ve permanently closed.

Polis has lifted the state’s stay-at-home order effective Sunday, but no announcement has been made about restaurant dining rooms, Riggs said. The Colorado Restaurant Association expects a mid-May opening for the industry.

But even if dining rooms open then, restaurants remain “devastated,” Riggs said.

“Reopening is not the end of this,” she said.

“If that date gets pushed back, we’re likely to see more than 20% of the restaurants in the state permanently close,” Riggs added. “Even when dining rooms do start to reopen, it won’t be a full opening. They’ll likely open at reduced capacity — and most restaurants’ business models require them to operate at full capacity to make the numbers work.”

Bob Rusnak, who owns five Dickey’s Barbecue Pit restaurants in Colorado Springs, says he’s trying to make his numbers work, although the going has been tough.

Sales are down 30% to 35%, he said, depending on location. His restaurants offer carryout and curbside food, along with delivery from the Dickey’s website and third-party services.

His Dickey’s at 1466 Garden of the Gods Road has been hit hard. Lunch sales and catering orders from nearby businesses have fallen sharply because so many employees are working from home, he said. Likewise, he’s temporarily closed his downtown satellite location at 130 E. Pikes Peak Ave. because the city’s urban core “is like a ghost town.”

His Dickey’s restaurants at 4146 Austin Bluffs Parkway, 1252 InterQuest Parkway and 7935 Constitution Ave. are faring better; all are in shopping centers and near fast-growing parts of town.

”They’re down from what we would normally have in March and April,” Rusnak said. “But they’re doing better than what I thought.”

He’s not sure how business will play out when the state allows restaurants to reopen their dining rooms; the industry expects limited seating capacity to start and possibly other restrictions.

But he’s thankful for the support Dickey’s and other restaurants have received from the community. He’s also one of the fortunate restaurant owners who obtained a Paycheck Protection Program loan; he declined to say the amount, but he’s now rehired nearly all of the 15 to 20 employees he laid off from his workforce of 36 to 40 people.

If sales remain slow, and after his Paycheck Protection Program funding runs out, he might have to adjust his payroll again around July, he said.

For now, however, Rusnak remains optimistic.

“We’re pleasantly encouraged by the community support for the restaurant industry as I’ve seen it in our own place,” he said.

“We’re trying to manage it the best we can.”

Richard Skorman, who operates Poor Richard’s — the downtown restaurant, cafe, bookstore and toy store at 324 1/2 N. Tejon St. — has been grappling with his share of lost sales, which are down by about 75% on a year-over-year basis.

He “invested a fair amount” to rebuild a portion of his dining room to transform it into kitchen space so that employees could work safely while practicing social distancing.

Routine operations take more time and effort. Produce deliveries that used to be immediately placed into a walk-in cooler now are left outside regardless of weather. Items then are quickly removed from a cardboard box, put into a plastic bag or liner and wiped down before they go into the cooler.

“What was usually a 20-minute, putting away deliveries is now an hour, hour and a half, two hours,” Skorman said. “We wash down every cardboard box. Same thing with all the inventory we get in for retail. We’re just trying to be super careful.”

Poor Richard’s cafe is now closed, and his restaurant no longer accepts cash for fear of his employees handling contaminated money, he said.

About three weeks ago, Skorman also closed the restaurant to customers who were coming inside to wait in line for takeout orders. It was difficult to keep customers and employees a safe distance apart, he said.

The last straw came when a customer sneezed on an employee, who became visibly upset and immediately went home. She never became sick, but Skorman said he immediately closed the restaurant to customers, who now must wait outside to pick up food or call a phone number on the front door to place an order.

“She was just so shaken by it,” Skorman said of his employee. “And we realized that we weren’t doing enough to protect our employees.”

Unlike Dickey’s, Skorman failed to receive a loan through the Payroll Protection Program. He’s going to reapply now that the program is expected to receive a new round of funding from Congress. For now, he’s laid off 38 of his 53 employees.

Skorman said he’s uncertain how business will fare when dining room restrictions are lifted. Customer and employee safety remains paramount, he said, and he supports requirements for diners to wear masks when they enter and for tables to be spread out.

“I just worry that we’re going to rush into trying to get the economy going again when we don’t have the precautions in place,” Skorman said. “If there’s massive testing or a cure that really came about quickly or there was a way to do contact tracing like they’ve done in Sweden and other countries, that’s one thing. But I feel like this pressure to open up the economy really needs to be balanced with the fact that we don’t have the medical infrastructure to ensure safety.”

Stopping the spread of the coronavirus is difficult, according to the head of Colorado's health department, because up to half of the community transmission is by people who have no symptoms.