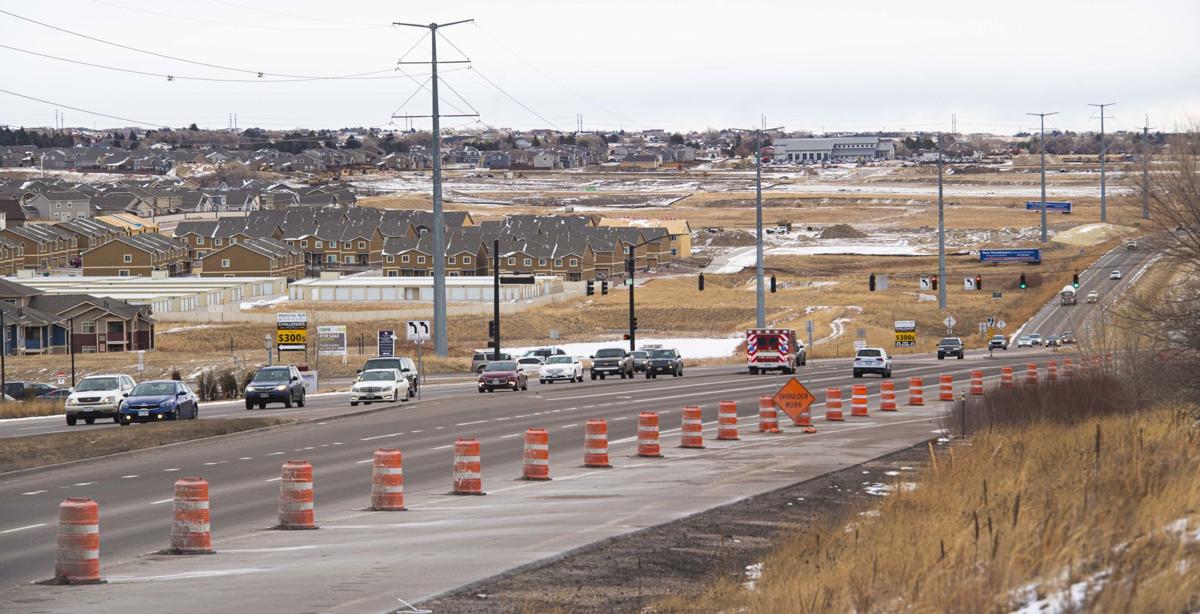 Woodmen Road, the east-west highway that runs along the length of Colorado Springs’ north side, is one of the city’s busier residential and commercial corridors.

Now, growth along a roughly 7-mile stretch of Woodmen, extending east from Powers Boulevard to the Falcon area in unincorporated El Paso County, is poised to accelerate like the thousands of cars that travel the road daily.

Among projects completed, underway or on the drawing board that would fill in several undeveloped parcels along and near Woodmen’s eastern stretch: an 800-acre northerly expansion of the Banning Lewis Ranch; a new King Soopers-anchored shopping center; retail development at Marksheffel Road; apartment complexes; and new neighborhoods teeming with thousands of rooftops.

“It certainly appears that the energy is in that area today,” said John Gatto of Crestone Development in Colorado Springs, who’s part of a group that owns 12 acres on the southwest corner of Woodmen and Marksheffel and is looking to develop the site.

That momentum is being fueled in large part by the demand for housing, which also drove the development of Academy Boulevard, Powers Boulevard and other major corridors in Colorado Springs over several decades, residential and commercial real estate industry members say.

With the mountains to the west and Fort Carson to the south serving as barriers, Colorado Springs has grown for years to the north and northeast. Wolf Ranch, Cordera and Stetson Hills are some of the mostly residential projects that have spread across outlying areas of the city.

But the city’s population continues to rise, and so does the desire for housing. Last year, more than 16,000 homes were bought and sold around the Pikes Peak region, the second-highest total on record, according to Pikes Peak Association of Realtors data.

Builders took out more than 3,500 permits in 2019 to construct single-family homes, the second highest total in 14 years.

Apartments also are in demand. The Springs-area apartment vacancy rate was below 6% in the fourth quarter of last year; 10 to 15 years ago, the rate was often in double digits.

And Woodmen, between Powers and unincorporated Falcon, has large swaths of undisturbed land on its north and south sides that are attracting real estate developers.

Residential development along or near Woodmen isn’t new. Unincorporated Falcon Highlands has about 350 single-family homes southwest of Woodmen and Meridian roads, while Forest Meadows, being developed inside city limits northeast of Woodmen and Black Forest roads, has several hundred more.

Farther north of Forest Meadows, the Sterling Ranch development, where as many as 5,200 residences have been proposed, is underway in the county.

The Ranch, another county development proposed northwest of Woodmen and Meridian, envisions upward of 2,150 homes.

The 24,000-acre Banning Lewis Ranch, which makes up the eastern one-third of Colorado Springs, was annexed by the city in 1988.

It went through years of inactivity, mainly because of the financial woes and indifference of several ranch owners.

The first Banning Lewis homes started popping up in 2008 southeast of Woodmen and Marksheffel roads, and significant residential development finally began around 2012, when Oakwood Homes of Denver took control of about 2,600 acres on the ranch’s north side.

Today, roughly 2,000 homes have been built southeast of Woodmen and Marksheffel in the initial phases of Banning Lewis Ranch development.

Despite the several thousand homes along or near Woodmen, more are on the way.

Colorado Springs homebuilding off to booming start in 2020

The residential and commercial project, an irregularly shaped parcel outside Colorado Springs’ city limits, would straddle the north and south sides of Woodmen and run roughly from Golden Sage Road on the east to Mohawk Road on the west.

Nor’wood has requested Colorado Springs to annex the property, while approving a master plan, concept plan and zone change. City staffers have reviewed Nor’wood’s proposal and the project could go to the city Planning Commission in March or April. The City Council would have to sign off on the annexation.

Nor’wood’s proposal calls for up to 2,900 residences to be developed in three phases over 12 to 15 years; 60% of those residences would be single-family homes and the rest apartments and townhomes.

But since Nor’wood already has 18,000 acres of the Banning Lewis Ranch, why develop another 800 acres?

Because that’s where people want to live, and where roads and utilities already are nearby to serve the area, said Tim Seibert, a Nor’wood vice president overseeing the company’s Banning Lewis Ranch North proposal.

“There’s clearly a housing demand in that northeast part of the city,” he said.

There are practical and logistical advantages, too, Seibert said.

The portion of the proposed Banning Lewis Ranch North that lies south of Woodmen — about one-third of the 800 acres — was recommended for annexation in a 2006 city annexation plan, he said.

The overall property, Nor’wood says in its proposal, is a logical extension of Colorado Springs’ boundaries and its annexation would give the city control over development standards and transportation needs in the area.

“By annexing it into the city, we meet city standards and everyone understands sort of how that will get constructed and then will get built as the development phases to the north,” Seibert said.

If the property were developed in the county, homes would drill wells and heighten concerns about depleting underground water supplies that serve unincorporated county areas, he said.

Woodmen also provides a connection to employment centers to the west, such as businesses at the Briargate Business Campus, he said.

“As the housetops get put in, we’re going to see more commercial added because it’s going to be demanded, to cater to that particular area,” Useman said.

“People want to be close to where they shop and where their services are. It’s just bound to happen and we’re just starting to see it.”

The Falcon area, around Woodmen and Meridian, has seen waves of commercial development that began more than 20 years ago.

After the city annexed the Banning Lewis Ranch, the area went undeveloped for years because of its ownership issues. As a result, Meridian Ranch, Woodmen Hills and other subdivisions leapfrogged over the ranch and were developed farther east in Falcon.

Since then, a Walmart Supercenter, Safeway and dozens of fast-food and sit-down restaurants, liquor stores, auto parts suppliers, hair salons and others have developed in the area. King Soopers might be joining them; the grocery plans a 123,000-square-foot store northwest of Woodmen and Meridian Road in Falcon Marketplace, a proposed new retail center.

At Woodmen and Marksheffel, developers are eyeing projects on at least three of the corners that would turn the intersection into a commercial hub.

McDonald’s plans to build a restaurant on the northwest corner, while commercial broker and developer John Egan of NAI Highland in the Springs plans a multitenant, 10,000-square-foot retail building nearby. He’s pre-leased half of the project and is considering a second, similar-sized building.

“Go east of Powers, and then north of Woodmen,” Egan said. “That’s where it’s (growth) going. It’s all filling in there. That’s what retail does. Retail follows the residential and the rooftops.”

But if residential and commercial growth along and near Woodmen is inevitable, so are questions about the effects those projects will have on the corridor. Traffic will be among major concerns, with the Banning Lewis Ranch North project having the biggest potential impact.

In its comments about Banning Lewis Ranch North, the city’s traffic engineering office says Nor’wood must be responsible for widening Woodmen from four to six lanes from Golden Sage Road to the project’s west boundary.

Among other traffic upgrades, Nor’wood also would be required to pay 15% of the future cost of improving Woodmen as it extends west to Black Forest Road, according to traffic engineering.

The company also should be responsible for building the Banning Lewis Parkway and a traffic signal at the parkway’s intersection with Woodmen.

Nor’wood acknowledges the need to widen Woodmen and make other upgrades along the corridor, Seibert said. But the widening should take place over the 12- to 15-year buildout of Banning Lewis Ranch North and not all at once during the first four- to five-year phase, he said.

“Everyone would expect anything that happens out here will increase traffic,” Seibert said.

“It’s a question of, so when are those improvements warranted?”

Another concern about Woodmen’s growth: the loss of a rural lifestyle for residents living on larger-lot developments along and near the road.

If annexed, the two-thirds portion of Banning Lewis Ranch North to be developed north of Woodmen would be sandwiched between dozens of 5-acre home sites in unincorporated El Paso County.

Some residents whose properties back up to undeveloped land might one day have hundreds of new homes as neighbors — a situation many homeowners have faced over the last 20 to 25 years as urban-style growth spread to unincorporated Falcon.

Nor’wood has proposed 50-foot buffers between Banning Lewis Ranch North and those large-lot homes, Seibert said. At the same time, housing densities would be lowest — 1 to 3.49 dwelling units per acre — in areas closest to those large-hot homes. Densities would climb higher as residences are developed closer to the center of the project.

Not everyone is satisfied, however.

Ideally, however, the company should increase the size of home sites in the Banning Lewis Ranch North areas that would be adjacent to the large-lot homes in the county, she said.

Homeowners such as Gail Jones, who’s lived for 44 years along Brule Road, on the west edge of what would be Banning Lewis Ranch North, said she’s enjoyed the peace and quiet that comes with living on her 5-acre home site.

“You don’t worry out here,” she said. “I have two big dogs, so I don’t worry, anyway. But you just don’t. People don’t come here on my road unless they’re visiting someone or they live here.”

Told that the Banning Lewis Ranch North project could bring several hundred homes to the area, Jones said that would be “horrible” for her and other residents.

The Gaylord Rockies Resort & Convention Center, the largest hotel in Colorado, plans to grow by more than 20% as part of an $80 million, 317-room expansion.