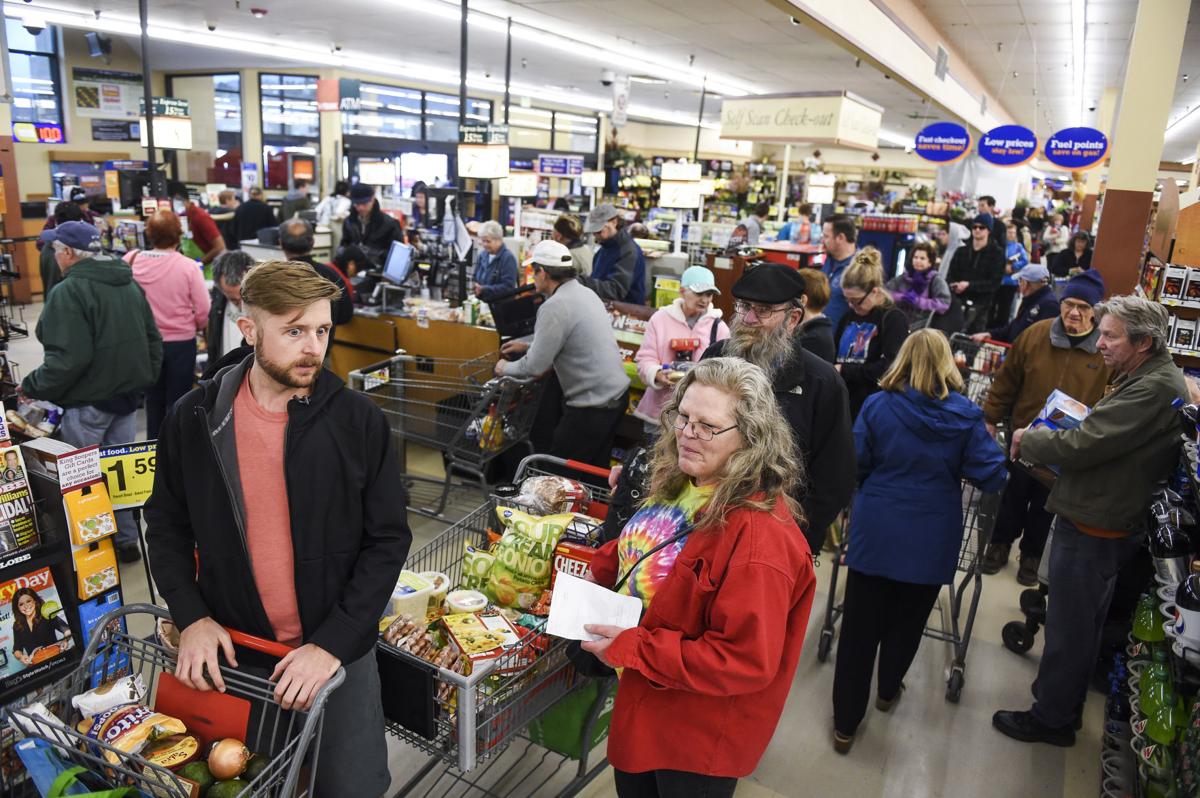 Keith Willschau, left, and Claire Smagala, center, join more than a hundred other shoppers in line to buy groceries at King Soopers in Colorado Springs on Feb. 20, 2015 . 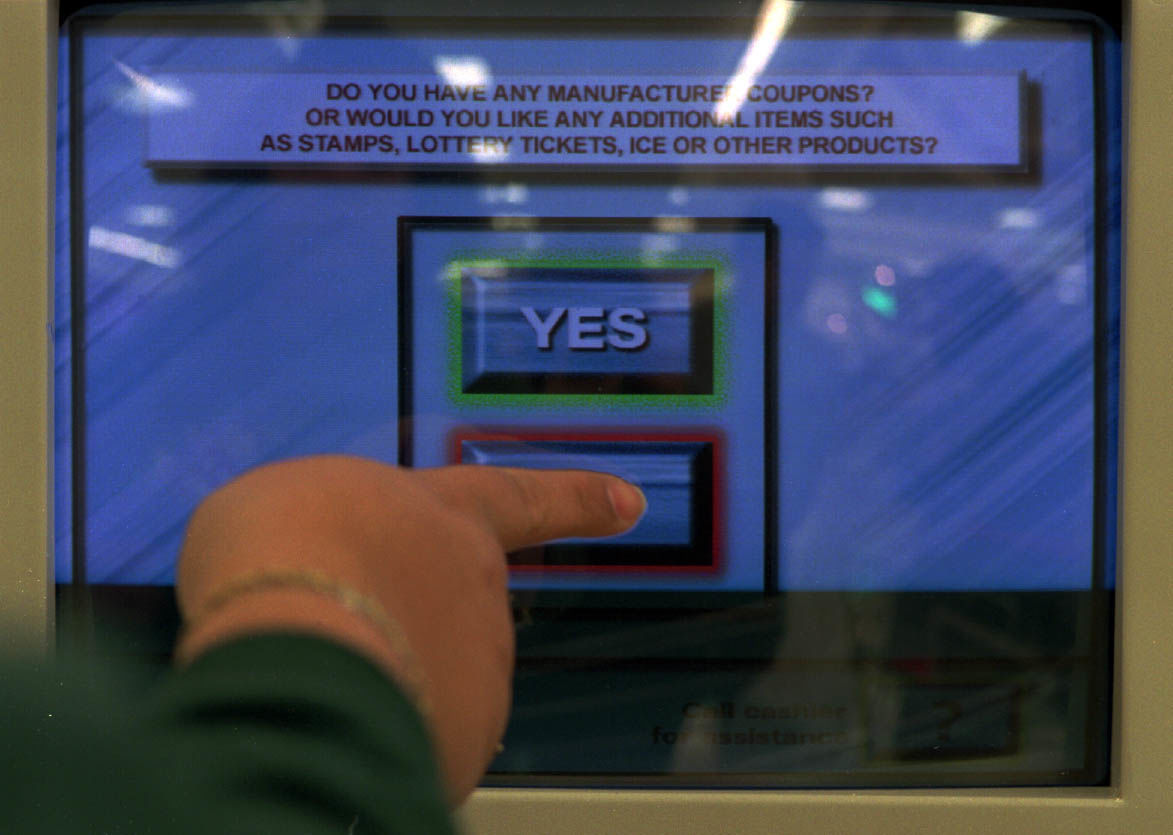 King Soopers opened its newest store today on Cheyenne Meadows Road. The store features a Soopers Scan Express, allowing customers to scan their own purchases. The screen takes you through the process step by step. Photo/Kelley 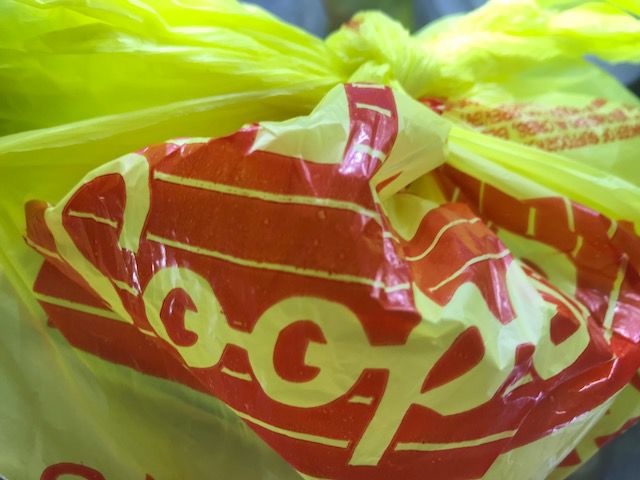 Kroger, the parent company of King Soopers, is the nation’s largest grocery chain and it plans to be plastic-bag free at all of its nearly 2,800 stores by 2025. (The Gazette)

Keith Willschau, left, and Claire Smagala, center, join more than a hundred other shoppers in line to buy groceries at King Soopers in Colorado Springs on Feb. 20, 2015 .

King Soopers opened its newest store today on Cheyenne Meadows Road. The store features a Soopers Scan Express, allowing customers to scan their own purchases. The screen takes you through the process step by step. Photo/Kelley

Kroger, the parent company of King Soopers, is the nation’s largest grocery chain and it plans to be plastic-bag free at all of its nearly 2,800 stores by 2025. (The Gazette)

A strike against King Soopers by its unionized workers seems more likely after members of United Food and Commercial Workers Local 7 on Friday began scheduling a vote on the company’s latest offer and approval to strike.

The contracts among the union, King Soopers and City Market were set to expire Jan. 12 but were extended into February as negotiations continued.

The union canceled the extension Feb. 22, citing “little progress” in talks that left the union and companies “far apart” on key issues of pay, benefits and working conditions.

Under Local 7’s 2015 contract with King Soopers, workers are paid between the minimum wage of $11.10 an hour for a courtesy clerk and $20.41 an hour for a bakery manager.

The union said in a news release that talks broke down when company negotiators late Thursday walked out of the Aurora hotel where discussions were underway and did not return. King Soopers and City Market are owned by Cincinnati-based Kroger and hold a 47-percent share of the grocery market statewide, according to the Local 7 release.

In an email statement sent Friday, King Soopers denied that it ended negotiations and said “our team has made themselves available to continue negotiating with the union. As negotiations continue our stores and associates will serve our communities as they always have.”

The statement ended with, “We know our associates are the heart of King Soopers/City Market and we will continue to negotiate with them and our communities in mind.”

Local 7 later responded with its statement that “King Soopers committed to bargain with us all last night through midday today (Friday). We were shocked when they broke that agreement and abruptly left last night.”

A vote by Local 7’s 12,000 King Soopers and City Market members on the company’s latest contract offer and authorization to call a strike is expected as soon as the union can schedule locations, likely next week or the following week. The union’s bargaining committee is recommending members reject the contract and OK a strike.

“King Soopers and City Market’s demands will not only hurt workers but will also affect the customer service and shopping experience our communities have come to know and expect,” Local 7 President Kim Cordova said Friday in a news release.

“We are committed to making King Soopers and City Market a better place to work and shop, but we can’t do that without a partnership with the company.”

The company’s latest offer includes small raises for journeymen, the most experienced workers, but bonuses instead of raises for nearly half of union members, reduced benefits and increased costs for health care, fewer full-time positions and fewer hours for part-time workers and reduced benefits for retired workers the Local 7 release said.

“We want the people who touch our food every day to be healthy and have access to quality health care,” Cordova said in the release.

“King Soopers and City Market can’t be the leader in quality service and quality food if it doesn’t provide better wages and benefits for the men and women who serve our customers.”

The King Soopers statement said its offer includes a wage increase, “incremental investments” in the employee pension plan and “continued investment to best in class health care at no additional cost.”

Local 7 has proposed ending a two-tier wage and benefit structure for workers hired after 2005 that was adopted amid intense competition from nonunion retail giant Walmart, increased sick pay benefits, a guarantee of at least 32 hours a week of scheduled work for all union members and paid family leave, according to summaries on the union’s website.

The grocer was seeking to end the seniority system in scheduling workers, end health care coverage for union members working less than 28 hours a week, use lower-paid workers to perform more jobs and hire more workers who would work evening and weekend shifts only, according to a posting on Local 7’s site.

Contract negotiations with King Soopers and City Market began in mid-December. The union also has been in talks on a new contract with Albertsons, which also owns Safeway.

In Colorado’s last grocery strike, Local 7 members walked off the job at Safeway for 1½ months in 1996 after negotiations failed to produce an agreement.

King Soopers workers to vote later this week on strike

Unionized workers for King Soopers and City Market will vote Thursday and Friday on whether to authorize Colorado’s first grocery strike in 23 years.