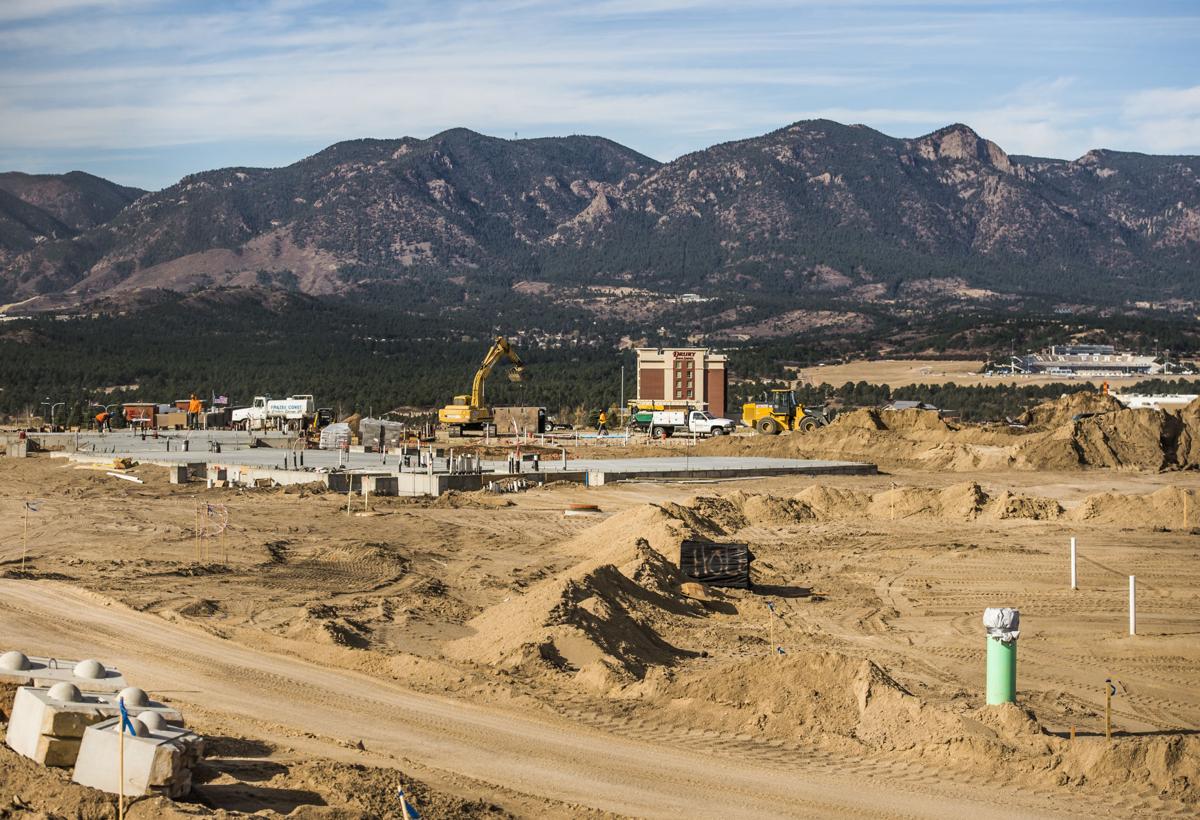 New apartment construction begins to take shape at Interquest and Voyager on Tuesday, November 1, 2016. Photo by Stacie Scott, The Gazette 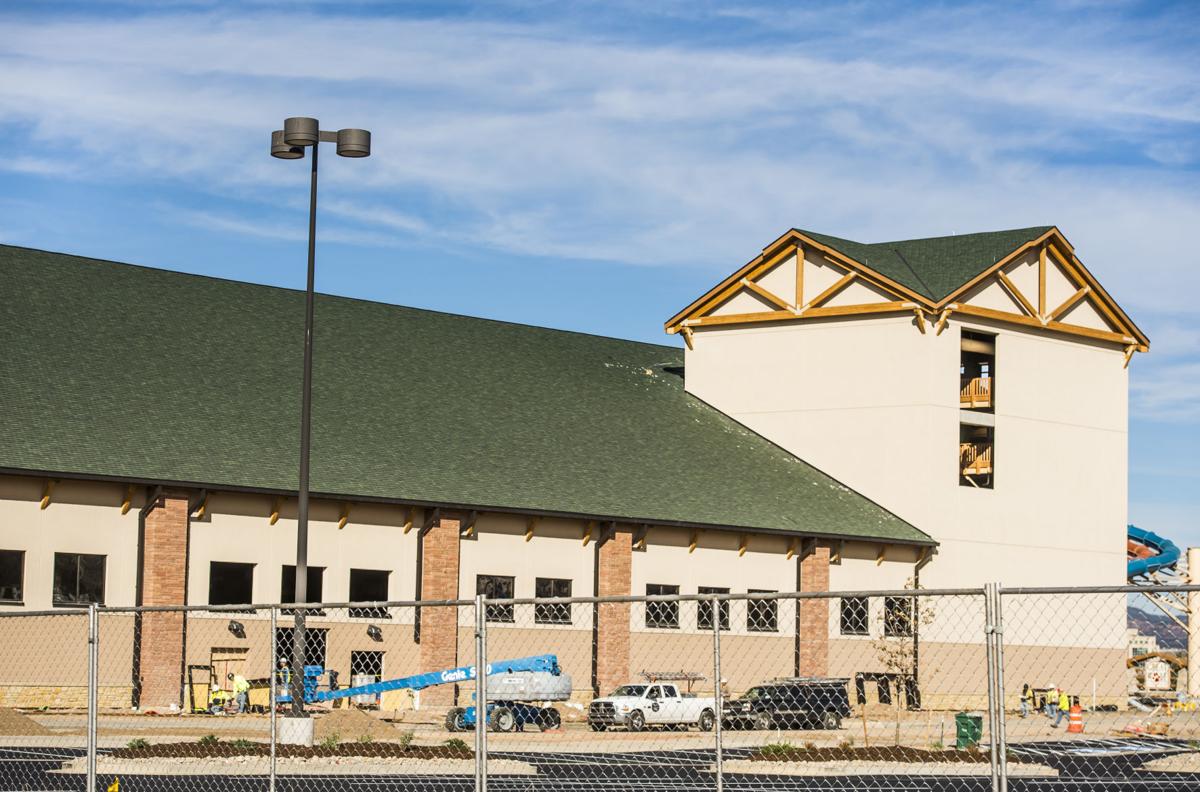 Construction continues on the exterior of the Great Wolf Lodge on Tuesday, November 1, 2016. Photo by Stacie Scott, The Gazette 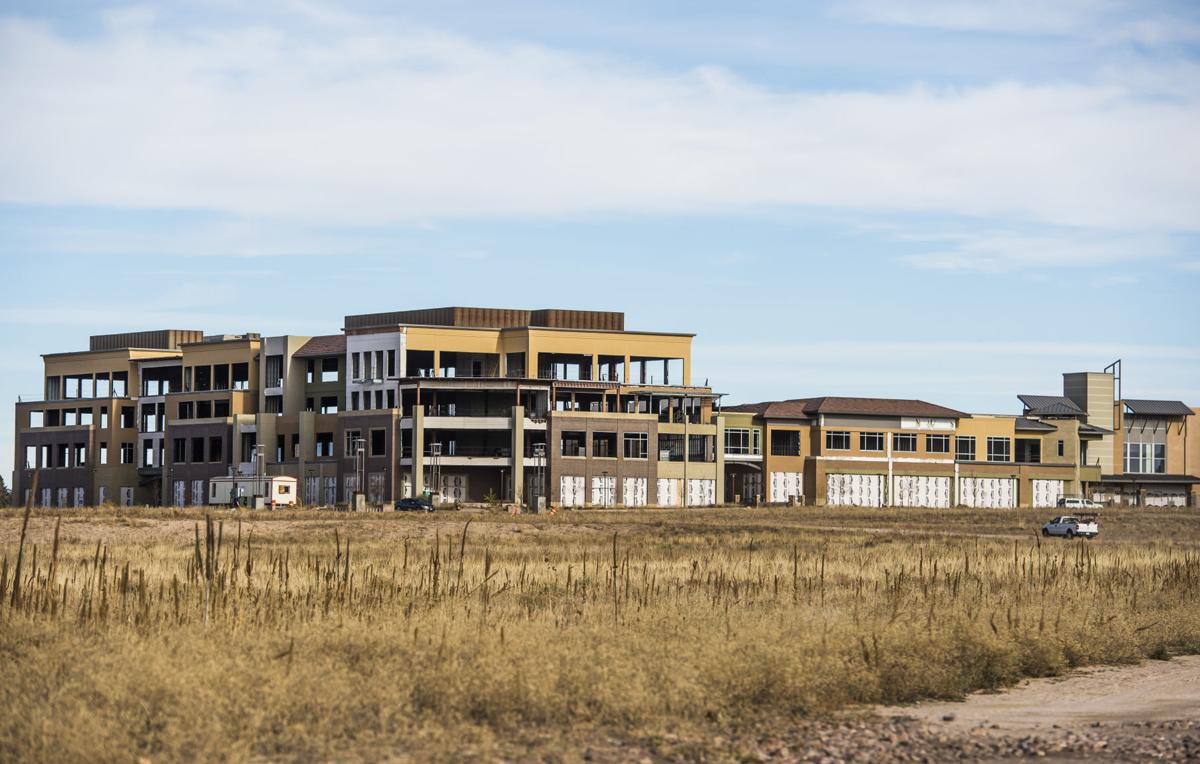 The Colorado Crossing development is pictured on Tuesday, November 1, 2016. Photo by Stacie Scott, The Gazette

New apartment construction begins to take shape at Interquest and Voyager on Tuesday, November 1, 2016. Photo by Stacie Scott, The Gazette

Construction continues on the exterior of the Great Wolf Lodge on Tuesday, November 1, 2016. Photo by Stacie Scott, The Gazette

The Colorado Crossing development is pictured on Tuesday, November 1, 2016. Photo by Stacie Scott, The Gazette

For 15 years, a 7-mile stretch of Powers on Colorado Springs' east and northeast sides has been the Pikes Peak region's hottest spot for new shopping, restaurants, apartments, shopping centers, entertainment and other commercial development.

Now, an area on the Springs' fast-growing north side - just east of Interstate 25 and with the intersection of InterQuest and Voyager parkways as its epicenter - is poised to become arguably the region's newest development kingpin.

Four major mixed-use projects - InterQuest Marketplace, InterQuest Commons, The Gateway at InterQuest and Colorado Crossing - are either underway or in various stages of planning near the InterQuest and Voyager intersection. Those developments, along with smaller, individual developments, are expected to bring many more restaurants, stores, hotels and upward of 1,200 apartments to an already bustling area.

"I would see this as Colorado Springs' new hub for hotels and restaurants and shops," said Slawek Pietraszek, managing director of Springs-based New Vision Hotels, which has bought land in InterQuest Commons for a future hotel site. "The Powers corridor, it's a little different than this one, which comes close to I-25 and close to Denver. It's a different potential than we've seen."

That potential - recognized by local, Denver and out-of-state developers who have bought land and are designing new projects - is being driven by a variety of factors:

- Residential and commercial growth. The mountains to the west and Fort Carson to the south serve as barriers and have steered much of the region's growth to the north, northeast and east over the past 30 to 40 years.

To accommodate growth, Powers Boulevard was extended to the north, InterQuest and Voyager were built, I-25 was widened and an interstate interchange was added at InterQuest Parkway. Briargate, Northgate and Flying Horse are among higher-income housing developments on the north side that attract retailers and restaurants. Gleneagle, Black Forest and other unincorporated El Paso County housing areas also are a short drive away.

"The demand is there because our town moves in only certain directions - north and east, primarily, and south to some degree, but primarily north and east," said Mark Useman of brokerage Colorado Springs Commercial, who's marketing InterQuest Commons. "You've got a prominent location at an (intersection) that's surrounded not only by great demographics in terms of growing residential but great daytime population for employment that sits within the InterQuest area and Northgate."

"There is a strong need for services, for food, for different retail-type uses that are naturally going to come into that area," he said. "We're seeing pretty good demand for the projects we're doing right there."

- The presence of major institutions. The InterQuest and Voyager area is home to more than just homes and businesses. New Life Church and Pikes Peak Community College's Rampart Range Campus bring thousands of people into the area, while the Air Force Academy is a short drive to the west. The new 311-room Great Wolf Lodge resort and water park, scheduled to open in late December at InterQuest Marketplace, also is expected to draw tourists and visitors to the area who will eat at nearby restaurants and shop at stores.

- Multifamily demand. Millennials who don't want to be tied to a mortgage and empty nesters who want maintenance-free living are opting for apartments; the area's multifamily vacancy rate is in the low single digits, and rents are at record highs. As a result, several complexes are planned or under construction in the Springs.

Meanwhile, individual developers plan 324- and 280-unit apartment projects on the northeast and northwest corners of Voyager and New Life Drive, respectively. And a suburban Denver real estate company that bought Colorado Crossing, the bankrupt development southeast of InterQuest and Voyager, also expects new apartments to be part of the mix as it revives the project.

Andy Klein, a principal at Colorado Crossing buyer Westside Investment Partners, said the company believes an improving Colorado Springs economy will have a ripple effect and create the need for more apartments and other types of development.

But can one area absorb so much new commercial development?

Not surprisingly, the real estate companies that plan the restaurants, apartments, stores and the like say they wouldn't go forward with their projects without the demand.

At the same time, developers say their lenders - still smarting from bad deals and failed projects during the Great Recession - won't make loans unless they're convinced the developments would work. Many developers must sign tenants ahead of time for their projects before they can obtain financing, Useman said.

"You can't get loans on things that are not leased," he said. "The things you see going in are not necessarily speculative. They're driven by actual deals, user deals that see the demand."

Fred Veitch, a vice president with Nor'wood Development Group and InterQuest Marketplace's builder, said the market will only absorb development if there's a demand. And a few years after the Great Recession, some retailers, restaurants and other businesses still remain cautious about their expansion plans and won't take risks.

"We are not a business that says, 'build it and they will come,' " Veitch said of commercial development. "I think you've seen projects that have failed that had that philosophy. Projects will only get built as there's consumer demand. And the market itself continues to be guarded and soft. So I don't think you're going to see over development."