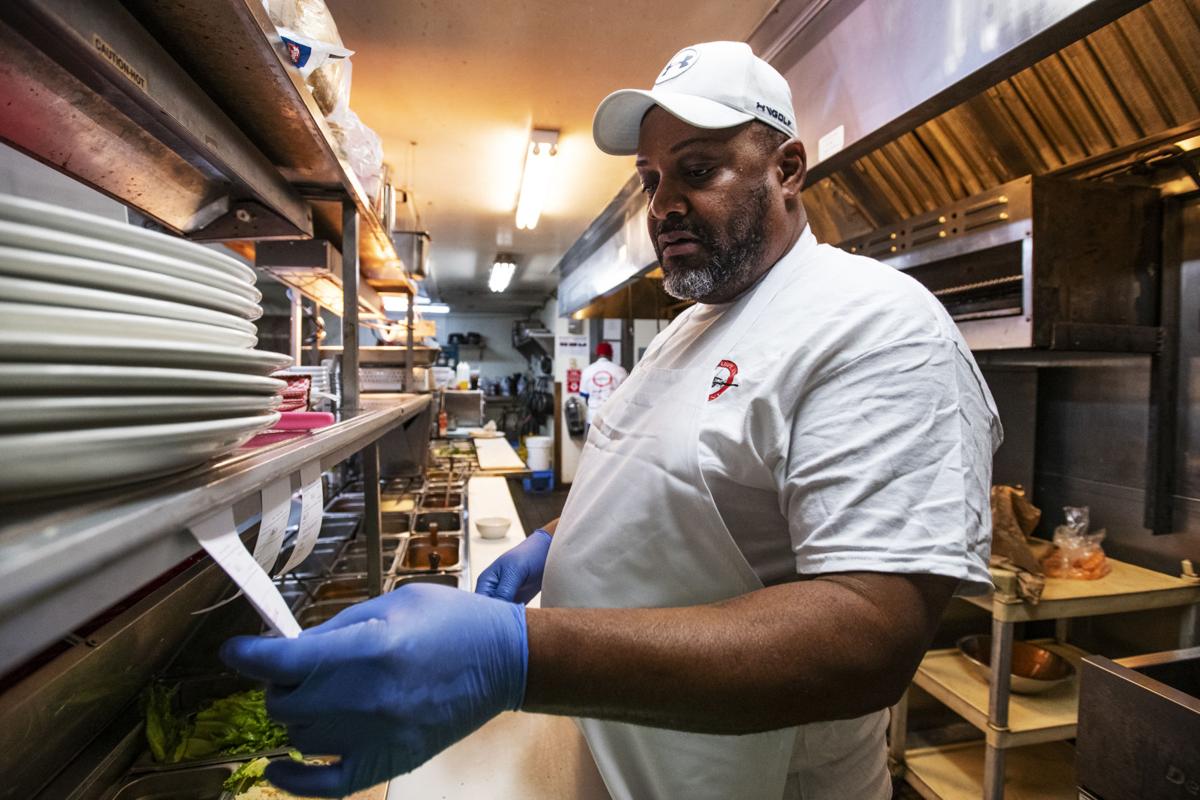 Cook Joe English checks an order ticket at The Airplane Restaurant last week in Colorado Springs . He has worked at the restaurant off and on for the past five years. The restaurant is often struggling to find 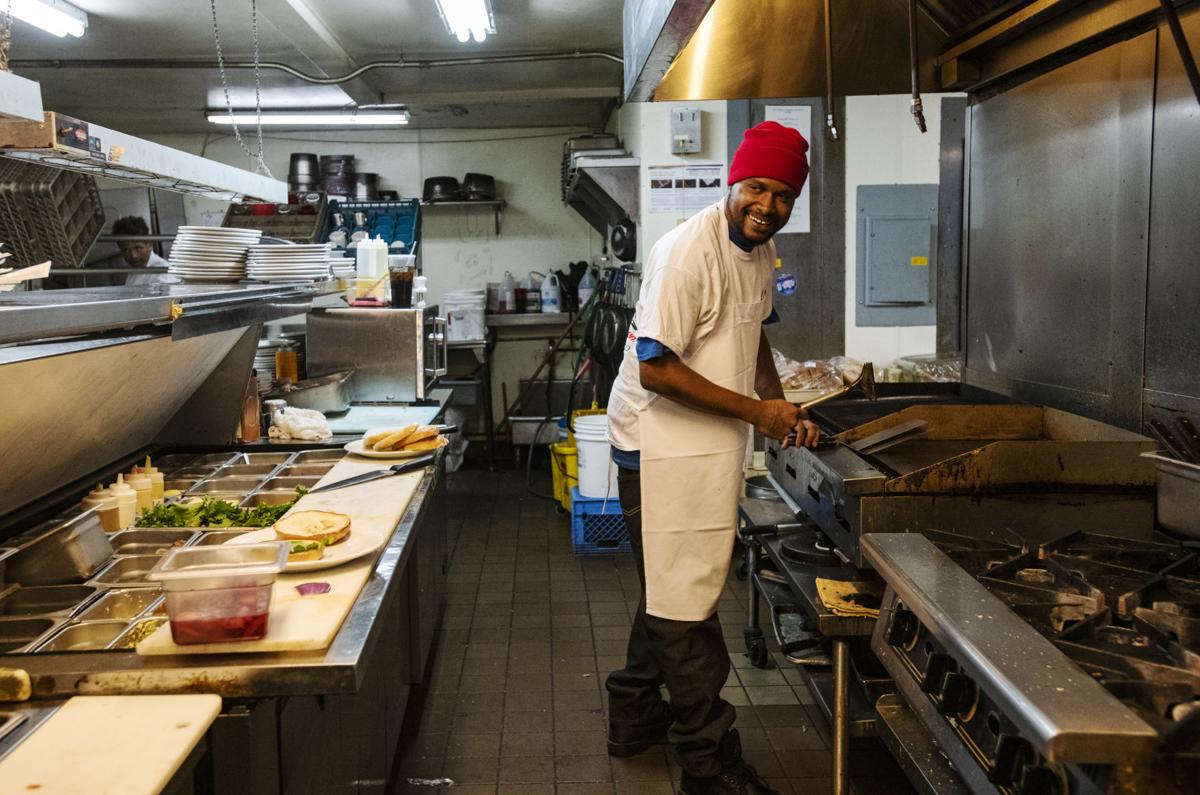 Restaurant cook Kenton Belle laughs at a coworker's comment while working on the grill at The Airplane Restaurant in Colorado Springs on Wednesday, Oct. 17, 2018. Belle has worked at the restaurant for nearly two years. (Photo by Kelsey Brunner/The Gazette) 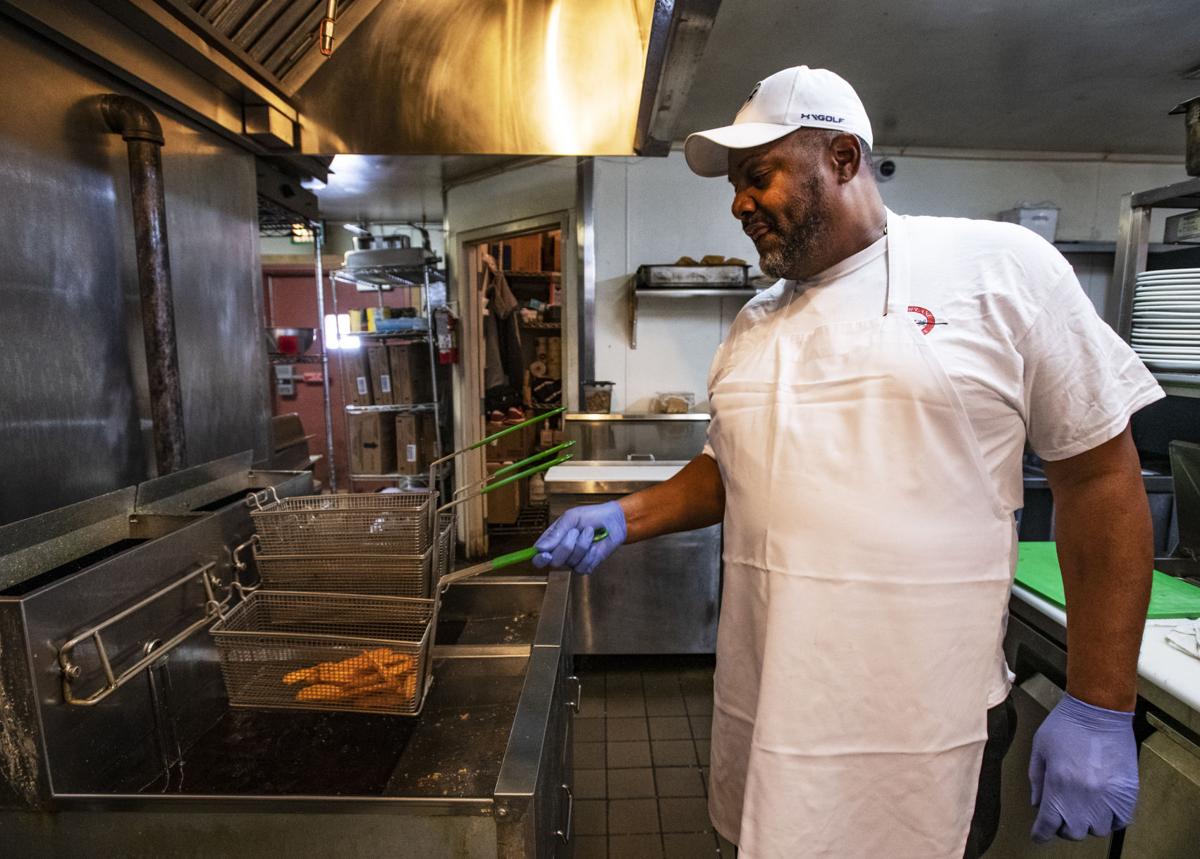 Restaurant cook Joe English shakes the grease off of the sweet potato fries before plating them at The Airplane Restaurant in Colorado Springs on Wednesday, Oct. 17, 2018. (Photo by Kelsey Brunner/The Gazette)

Cook Joe English checks an order ticket at The Airplane Restaurant last week in Colorado Springs . He has worked at the restaurant off and on for the past five years. The restaurant is often struggling to find

Restaurant cook Kenton Belle laughs at a coworker's comment while working on the grill at The Airplane Restaurant in Colorado Springs on Wednesday, Oct. 17, 2018. Belle has worked at the restaurant for nearly two years. (Photo by Kelsey Brunner/The Gazette)

Restaurant cook Joe English shakes the grease off of the sweet potato fries before plating them at The Airplane Restaurant in Colorado Springs on Wednesday, Oct. 17, 2018. (Photo by Kelsey Brunner/The Gazette)

It used to be that if Colorado Springs restaurateur Steve Kanatzar needed employees, he would put an ad in The Gazette or on Craigslist and get this result: a lobby “full of people wanting to work.”

“Now, you may get a few in,” says Kanatzar, owner of The Airplane Restaurant on the city’s east side. And amid a tight labor market, with a new restaurant seeming to pop up practically every week, Kanatzar is far from the only restaurant owner struggling to find workers.

“It’s kind of rough,” says Nelson Rufran, owner of Ruffrano’s Hell’s Kitchen Pizza. He employs about 50 people overall at his three locations in the Colorado Springs area and will hire an additional 20 to 30 when a fourth location opens by year’s end in Security, south of the Springs.

“It seems like a lot of people are going into the marijuana industry,” Rufran says. “They get paid more.”

King Soopers, City Market seeking to fill 1,000 jobs in Colorado Springs and around the state

It’s a struggle not just in Colorado Springs, but across the state, with kitchen workers the hardest to find, says Carolyn Livingston, communications director for the Colorado Restaurant Association. There are many factors at work, she says, but a leading one is the growing number of restaurants competing for those workers.

“We’re growing so fast,” Livingston said — a growth fueled by a seemingly insatiable hunger for dining out by consumers. Sales at restaurants in Colorado have increased by about 40 percent since 2010.

“I would say there is a labor shortage here in Colorado Springs because so many new places are opening up, especially in the downtown corridor and then also in the Powers, kind of northeast, corridor,” says Luke Travins, co-owner of Concept Restaurants. Concept’s brands include MacKenzie’s Chop House, Jose Muldoon’s, Flatiron’s American Bar & Grill and Colorado Craft.

Travins said Concept was fortunate not to lose workers when the Atomic Cowboy bar-and-restaurant complex opened recently on South Tejon Street. It was a different story when Oskar Blues opened downtown about a year ago.

“We lost a lot of staff to that place,” Travins says. But many of those workers, he said, have returned.

It’s not just competition for workers inside the industry that’s the issue. Some restaurant workers are indeed shifting to the marijuana industry, but Livingston notes competition from other sectors as well, including construction — which is struggling with its labor shortage — and retail.

According to statistics posted online by the Colorado Restaurant Association:

• There are more than 11,500 eating and drinking locations in Colorado.

• More than 75 percent of Colorado's restaurants are independently owned and operated.

• Colorado restaurants account for 12 percent of the state labor force.

So if the marijuana industry or some other sector is siphoning off workers with the lure of higher pay, why not pay even more?

Restaurants operate on “razor-thin profit margins,” Livingston says. And they’re struggling with a rising cost of labor, with the minimum wage increasing each year due to the passage of Amendment 70 in 2016. The state’s minimum wage this year is $10.20 an hour, or $7.18 for tipped workers. It will reach a mandated $12 an hour for nontipped workers in 2020.

It’s not just minimum-wage workers who benefit from that increase, Travins says. “The people who are making $2 an hour above minimum wage stay $2 above. That ratchet effect of that minimum wage increase has been an industrywide hit to our labor costs.”

Restaurant owners’ options in dealing with the rising cost of labor are limited, Kanatzar says. “Restaurants can’t raise their menu prices any higher or it’s going to drive away business.”

“I’ve been nailed by people telling me that I have no idea how to run my business if I can’t pay somebody 12 bucks an hour to wash dishes,” says chef Robert “BB” Brunet, owner of Momma Pearl’s Cajun Kitchen. “It has nothing to do with that. There’s only so much money going around in a restaurant. I can’t tell my landlord, ‘Hey, the minimum wage went up. I need you to lower my rent.’”

Momma Pearl’s is a small place, Brunet says, with typically no more than seven to nine employees.

“I personally not only run the business, but I’m back there working. I do everything. I introduce myself as the executive chef and dishwasher, because I do everything in between.”

When he is in search of employees, he finds it’s not a lack of bodies but a lack of people with the right skills or the right attitude that’s the problem.

Culinary schools are pushing out new cooks as fast as they can, he says. “But because of the culture and the current popularity of chefs in general, most of them come out thinking they’re going to have their own TV show by next Thursday. … So that’s been somewhat of a challenge for us, getting the new people from school who feel they don’t have to do menial tasks” — even though the vast majority of work in the kitchen, he says, is “repetitive, menial work just getting ready for the day.”

Kanatzar, of The Airplane Restaurant, worries that the tight labor market is promoting bad hiring practices.

“I used to get calls all the time for job references,” he says. “Now people don’t care. They’re almost afraid to call for a reference in case it’s a bad one.”

He’s had friends across the state “say they will hire anyone who can ‘fog a mirror.’ I’m not there yet.”

Restaurants typically operate on razor-thin profit margins of 3 to 6 percent. A typical $15 restaurant meal gets broken down as follows:

Qualified line cooks are the hardest workers to find, Kanatzar say. He’s had many line cooks start as dishwashers who wanted to advance in the industry. He typically starts dishwashers at minimum wage; as they learn more and need less supervision, their pay will increase along with their skill set.

“I only hire very experienced pizza makers, or at least I try to anyway. On a scale of 1 to 10, they have to be at least an 8.”

Drivers, he says, “are probably the second hardest because you’ve got to have people with a clean driving record, a good car, insurance. And then the counter help is probably the easiest to find.”

He looks for people with potential “who have a good head on their shoulders and can think on their feet, and who are hard workers at the same time. A lot of those people I try to train and make them my managers and then pay them a little more.”

Concept’s restaurants benefit from “a really good core staff” at each location, Travins says. Not only do those people stay put, they help “protect their environment” by weeding out “less-than-stellar employees” early on. “They don’t want anyone new making them look bad.”

“We’re really trying hard to feed that pipeline of workers,” she says. One initiative is Colorado ProStart, an education program with a curriculum focused on restaurant/hospitality industry management, culinary arts and business economics and providing high school and college academic credit, scholarships and opportunities for paid work experience. More than 800 students are in the program, with several Colorado Springs high schools taking part.

“That’s a really great program,” Brunet says. “What that is doing is planting the seeds at an early age.”

Brunet has also been talking with several organizations “to see if there’s a way we can take young people from high schools in troubled situations that want to get into this industry and have them apprentice for a few weeks at several restaurants to really get a feel for it, get a taste for it, and give them a direction.”

“I thought, wouldn’t that be a cool thing to do here? We could nurture that palate, we could give young people options, and they could come out of it saying I got trained by this chef or that chef. ... It makes them a lot more attractive to people like myself who are looking to hire skilled people who want to be here.”

The sports retailer Scheels All Sports Inc. announced that it will open its second Colorado location in Colorado Springs by mid-2021.