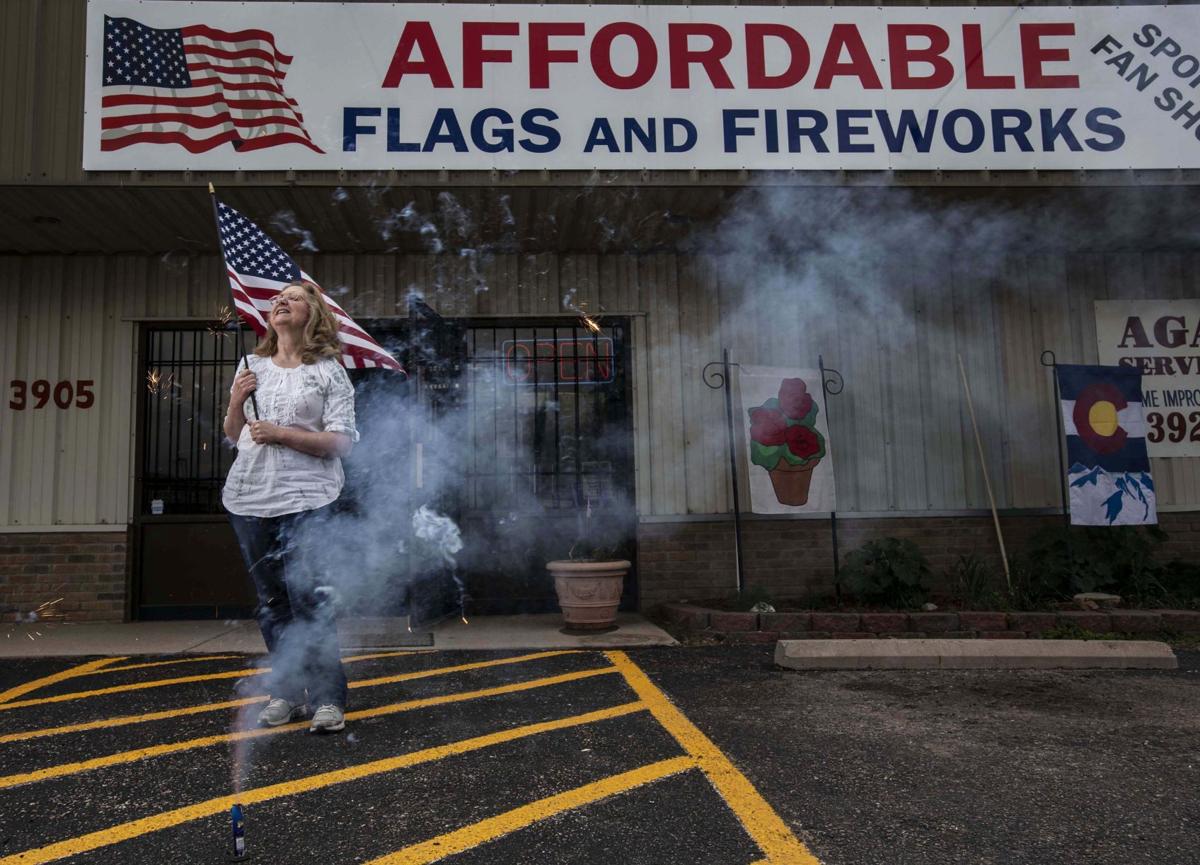 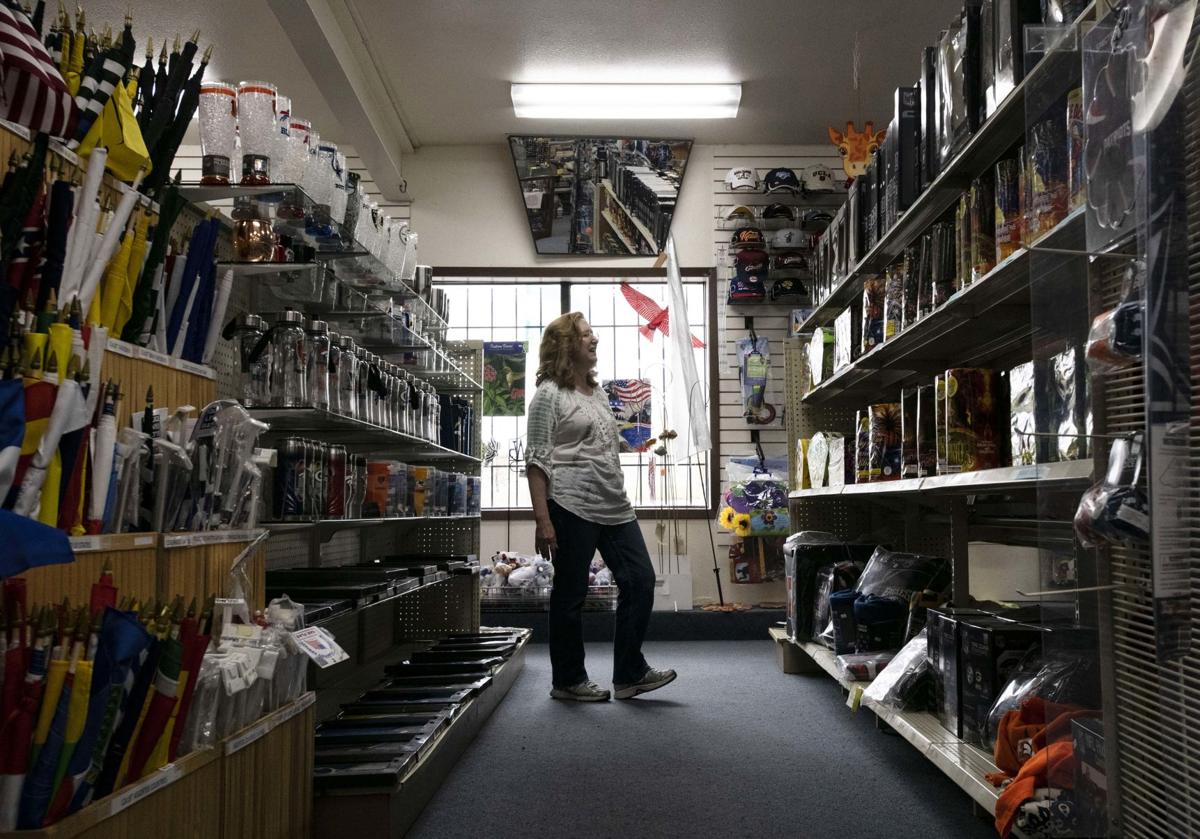 Jody Ilett, owner of Affordable Flags & Fireworks, Inc., views various fireworks on the shelves at her store on Tuesday, June 18, 2019. Ilett is celebrating 30 years of business. 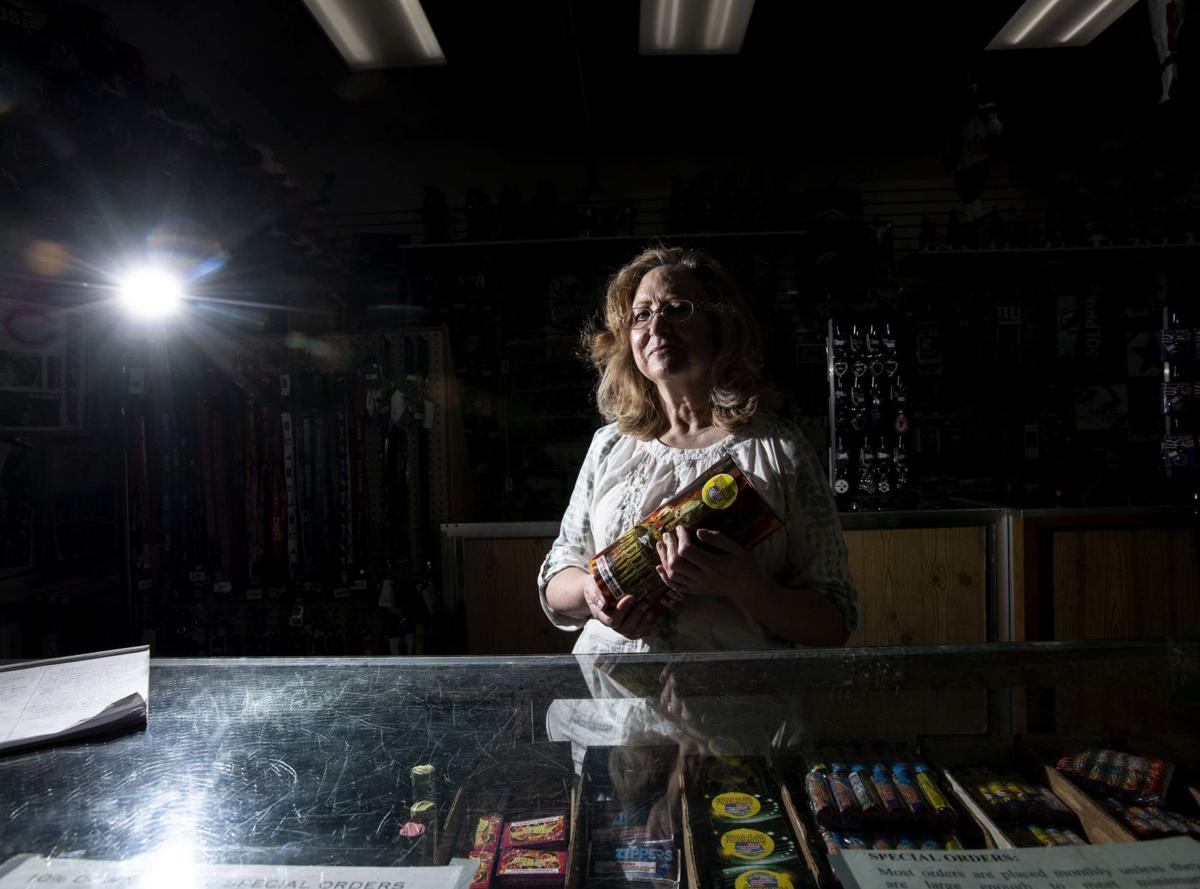 The Fourth of July brings a boom in business for Jody Ilett, owner of Affordable Flags & Fireworks. 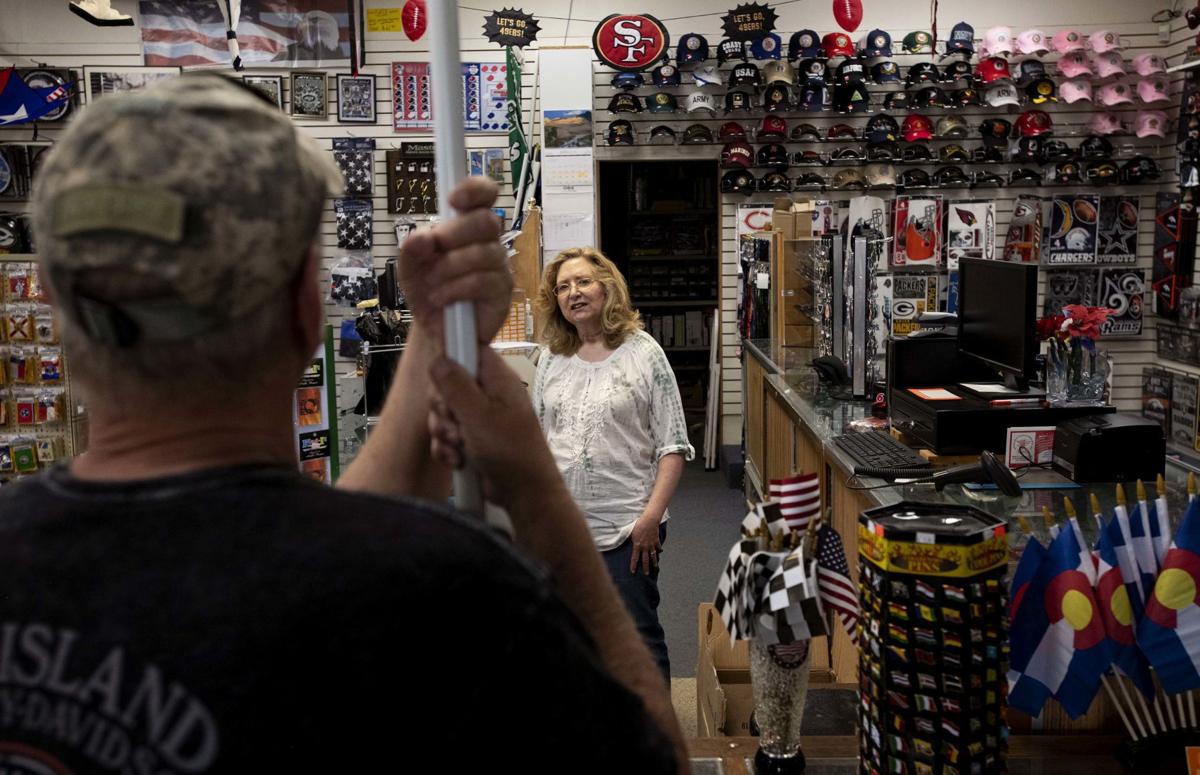 Jody Ilett talks recently with customer and Navy veteran Al Lender while he buys a flag for his American Legion post. 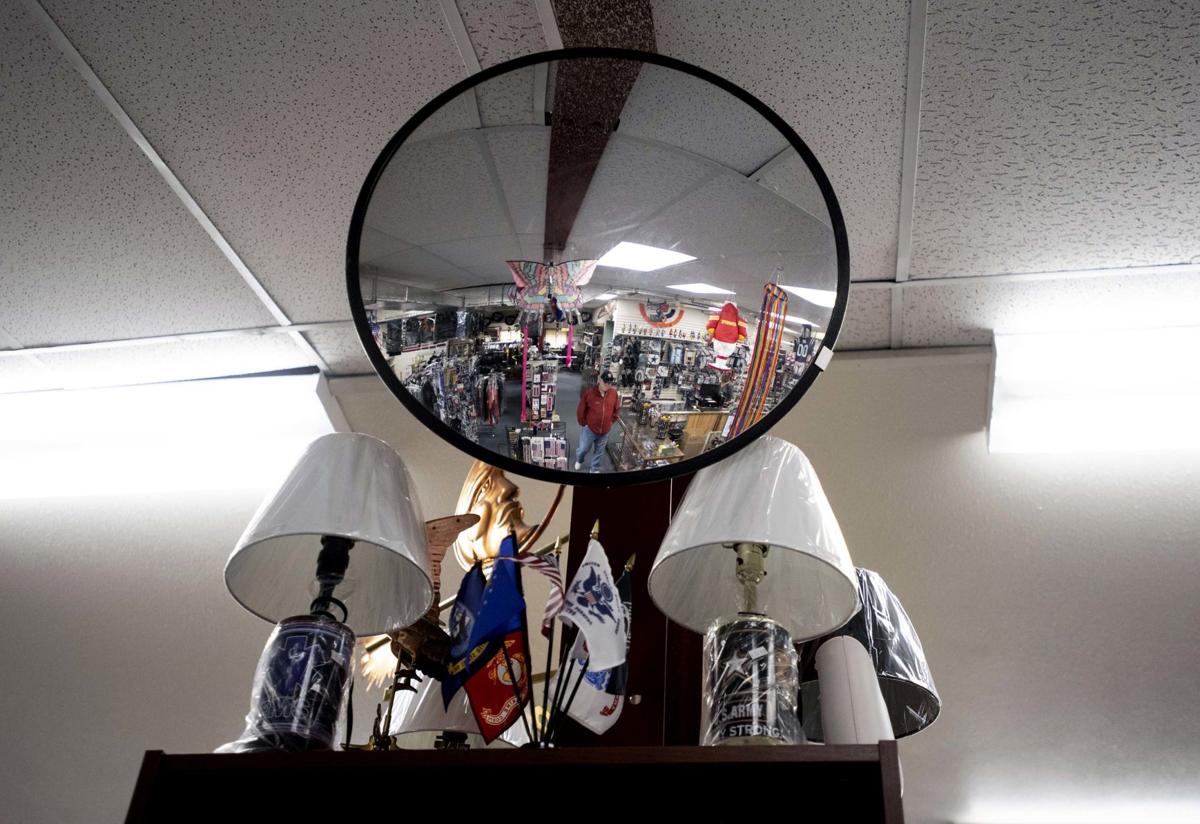 Bob Knowles is reflected in a store mirror browsing the store on Tuesday, June 18, 2019. Knowles has been shopping at Affordable Flags & Fireworks,Inc. For 30 years.

Jody Ilett, owner of Affordable Flags & Fireworks, Inc., views various fireworks on the shelves at her store on Tuesday, June 18, 2019. Ilett is celebrating 30 years of business.

The Fourth of July brings a boom in business for Jody Ilett, owner of Affordable Flags & Fireworks.

Jody Ilett talks recently with customer and Navy veteran Al Lender while he buys a flag for his American Legion post.

Bob Knowles is reflected in a store mirror browsing the store on Tuesday, June 18, 2019. Knowles has been shopping at Affordable Flags & Fireworks,Inc. For 30 years.

This is one in an occasional series profiling small businesses in the Pikes Peak region.

Affordable Flags & Fireworks has diversified a lot in its 30 years, but flags remain the heart of the business.

Along with sales of the Stars & Stripes — “top-quality, American-made U.S. flags,” owner Jody Ilett says — you can also buy state and international flags.

“We carry over 200 countries in what we call a light poly flag, the little 4-by-6-inch desktops, and then we can order whatever you need in other fabrics,” Ilett says.

And the flag part of the business isn’t just sales.

“We’re full service,” Ilett says. “We repair flags, we repair flagpoles, we install flagpoles. We actually have leases with several businesses where we go out and change their flags, clean and repair them every two months. We stay busy with that.” (Ilett owns the business with her husband, David, who handles most of “the outside work,” such as flagpole installation.)

The Fourth of July gives a boost to flag sales, as does Flag Day. But Memorial Day is the big holiday, Ilett says — and the only holiday for which the store stays open.

Where to watch Fourth of July fireworks in Colorado in 2019

As for the fireworks part of Affordable Flags and Fireworks, those sales are year-round. But obviously the Fourth of July brings a boom in business. (The sale and possession of fireworks are not legal in Colorado Springs; the store is south of the city.)

The store sells two classes of fireworks. Colorado allows only fireworks that are “nonexplosive” and aren’t intended to leave the ground, so Affordable Flags & Fireworks sells such in-state fireworks as fountains, ground spinners and sparklers. Fireworks that would be illegal to use in Colorado can be sold to out-of-staters, but such out-of-state sales account for only about 10 percent of the shop’s fireworks sales, Ilett says.

“They have to prove to me that they’re from out of state with a driver’s license and a registration to their car. They also have to sign a release that says they understand the fireworks are illegal in the state of Colorado and they have to remove them from this state and use them legally wherever they take them.”

The store can’t sell fireworks when there is a fire ban in El Paso County, as was the case last summer. Extreme fire conditions even led several communities, including Manitou Springs and Woodland Park, to cancel their public fireworks displays. But it was dry enough early in the year that Ilett saw the writing on the wall and didn’t invest much in fireworks.

Beyond the flags and fireworks, the store sells an unusual variety of merchandise, from wind chimes to motor oil. Sports memorabilia — primarily NFL-related — has been a growing category for years.

“We’ve diversified,” Ilett says, “which is probably why we’re still in business, with the sports, with the military decals and stuff like that, with the decorative banners. It’s quite diverse. The sports stuff has taken up so much of the store.”

You can thank the Denver Broncos for that “sports stuff.” The original owners of the store, Elsie and Ron McAninch, strayed into that area when the Broncos were going to Super Bowl XXXII in January 1998. (The Broncos defeated the Green Bay Packers.) “We sold $10,000 worth of Bronco stuff that month,” Elsie said. “So we said, ‘OK, this is a good deal.’ And we just kept expanding.”

The McAninches opened Affordable Flags & Fireworks in 1989, starting in a nearby, smaller space. Ready to retire, they sold it to the Iletts in 2006 along with another business, Agate Services, which specializes in ICF (Insulated Concrete Form) construction. Jody had been working for years at the flag store, starting as a part-time salesperson and eventually becoming manager; David was also working at the store when the McAninches decided to sell.

For the Iletts, “It was just smart business,” Jody says of the decision to buy the business. “Otherwise, we probably would have had to find another job.”

For the McAninches, it was an opportunity to hand over their business to someone they believed in.

“It worked out very well,” Elsie says. Jody, she says, is “like our family; we’ve known her since she was 13 years old. We knew we could trust them.”

According to a survey conducted for the National Retail Federation, 86 percent of Americans plan to celebrate Independence Day this year. The main way they'll celebrate is with a cookout or picnic (61 percent.) Forty percent plan to attend a fireworks show or other community celebration.

The average planned per-person spending on food items for the holiday is $73.33. Twenty-six percent of those celebrating plan to buy "additional patriotic supplies."

Wondering what fireworks are illegal in Colorado Springs?

Despite low fire danger this year, nothing has changed about setting off fireworks in Colorado Springs for the Fourth of July.