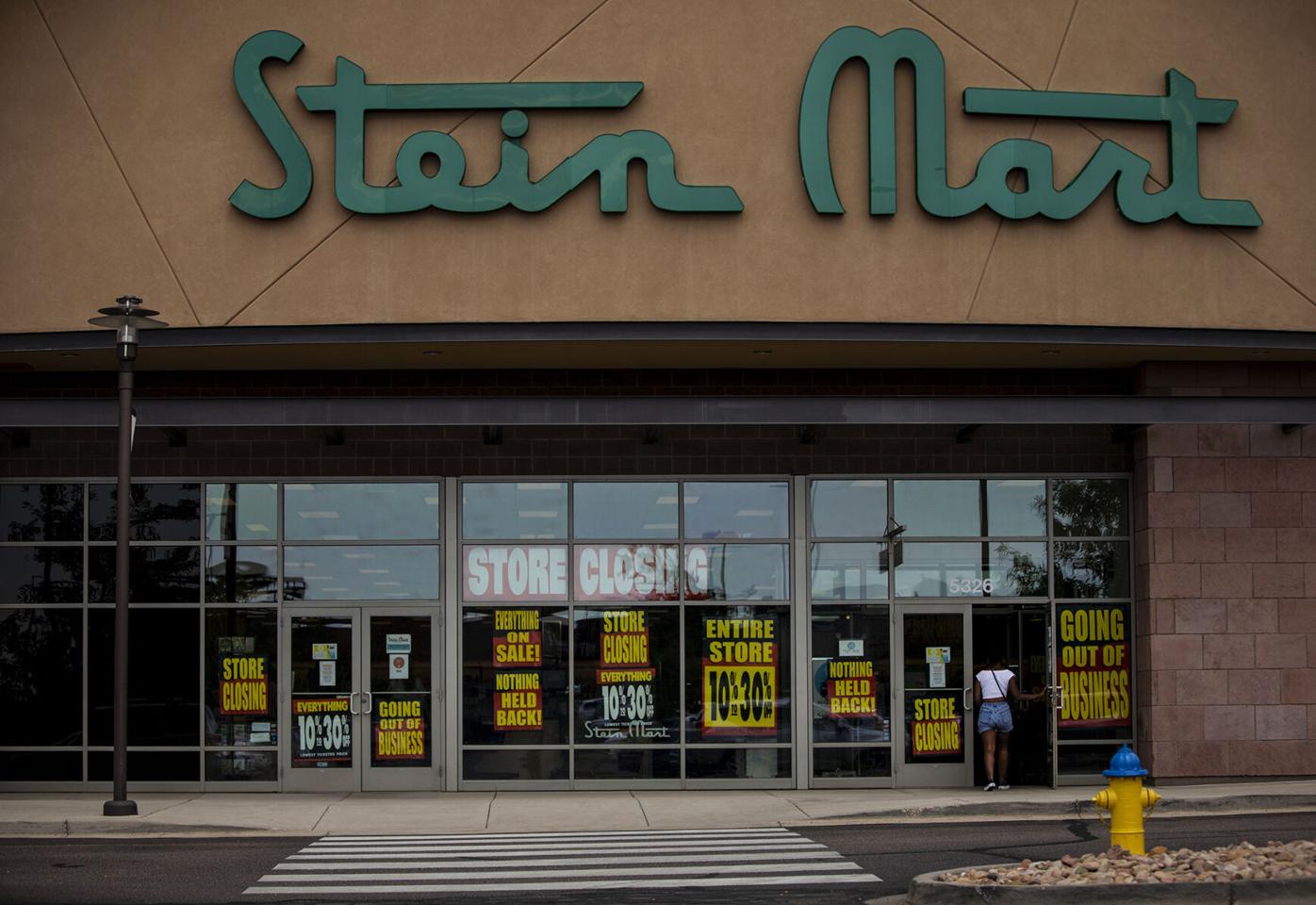 A customer enters Stein Mart at University Village in Colorado Springs on Tuesday, August 18, 2020. Stein Mart announced this month it would close its Colorado Springs location in the north central part of town along with about 280 others nationwide.(Chancey Bush/ The Gazette) 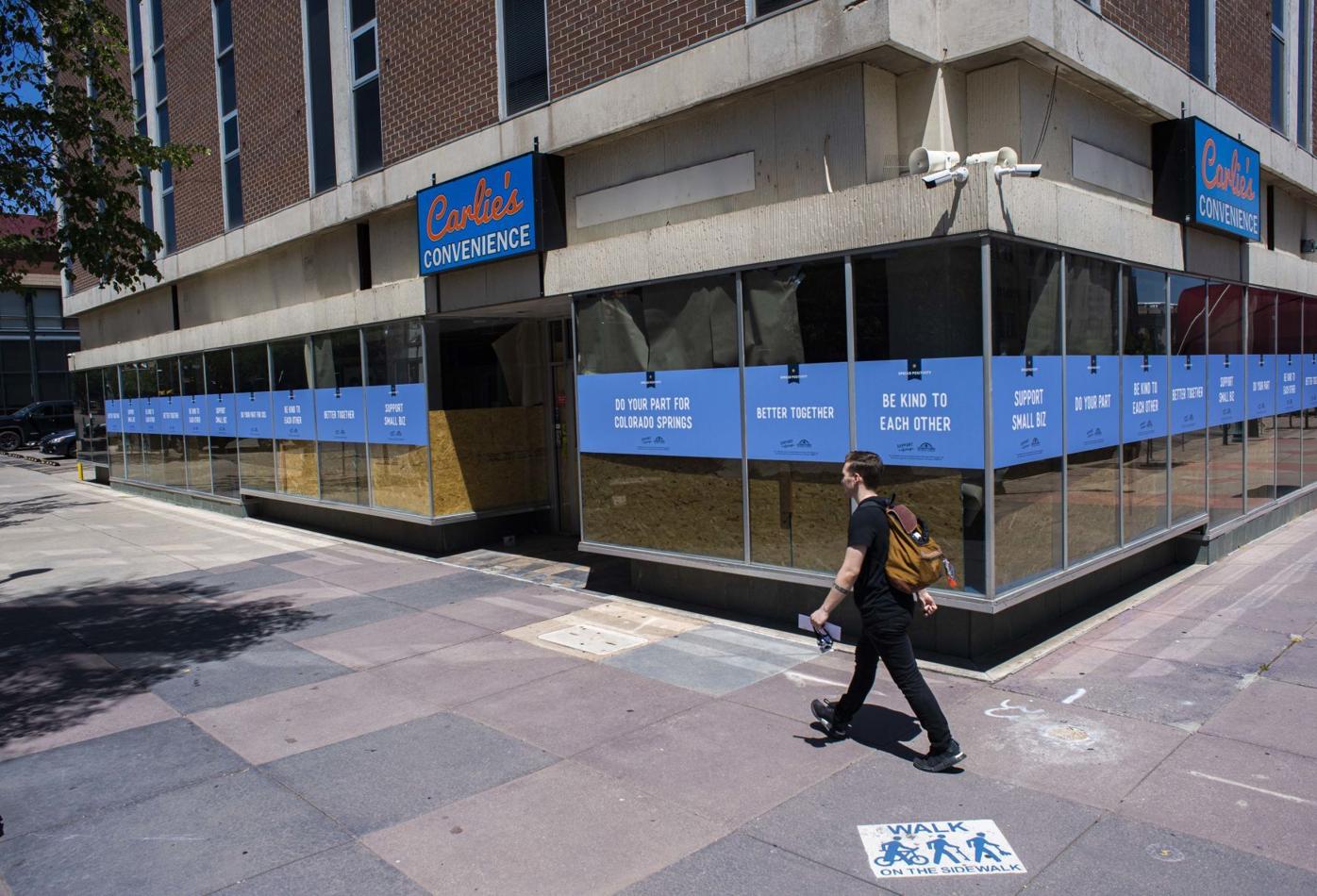 The Carlie’s Convenience store in downtown Colorado Springs shut its doors in March. Its owner said sales plunged after downtown office workers began working from home because of the COVID 19-pandemic. Retailers and restaurants have been especially hard hit because of the pandemic, commercial real estate industry members say. CHRISTIAN MURDOCK, THE GAZETTE

A customer enters Stein Mart at University Village in Colorado Springs on Tuesday, August 18, 2020. Stein Mart announced this month it would close its Colorado Springs location in the north central part of town along with about 280 others nationwide.(Chancey Bush/ The Gazette)

The Carlie’s Convenience store in downtown Colorado Springs shut its doors in March. Its owner said sales plunged after downtown office workers began working from home because of the COVID 19-pandemic. Retailers and restaurants have been especially hard hit because of the pandemic, commercial real estate industry members say. CHRISTIAN MURDOCK, THE GAZETTE

Colorado Springs' housing market has remained unscathed and even prospered during the COVID-19 pandemic; home construction and sales are up and prices have soared.

Amid store and restaurant closures, the vacancy rate for retail buildings and shopping centers has jumped from a year ago, according to a report by one Springs commercial real estate brokerage.

The office market has fared better, though questions remain about what happens when leases expire for some tenants over the next several months. Will office users whose employees work remotely from home renew their leases, seek rent concessions or opt for less space?

The industrial market, however, has remained healthy. Warehouses and distribution centers are in demand by online retailers, construction companies and other businesses, and Colorado Springs lacks enough space for such users, say some commercial real estate experts.

Here's a first-half snapshot of the Springs' commercial real estate market and how it might fare the rest of the year:

Brick-and-mortar retailers faced pressure even before the onset of the pandemic; e-commerce companies posed stiff competition and some financially troubled retail chains — such as Sears and Pier 1 Imports — had closed stores in Colorado Springs.

As the pandemic took hold, the state of Colorado ordered the temporary closure starting around mid-March of restaurant dining rooms and nonessential businesses, such as clothiers and hair salons, as a means of halting the spread of the coronavirus.

Though restrictions were relaxed in late April and May, ongoing limits on restaurant seating capacities have continued to hurt that industry, according to the Colorado Restaurant Association.

In the Springs area, restaurant closures include downtown locations of Dickey's Barbecue Pit and Starbucks, the C.B. & Potts bar and restaurant on the north side and the Buzz 'n Bagels breakfast eatery in Monument.

Some retailers — such as Carlie's Convenience in downtown and a south-side Tuesday Morning home furnishings discounter — also have shut down. Department store Stein Mart this month filed for Chapter 11 bankruptcy protection and announced it would close its Springs location in the north central part of town along with about 280 others nationwide.

The area's second-quarter retail vacancy rate rose to 5.4%, up nearly a full percentage point from 4.5% during the same time last year, according to a report from Quantum Commercial Group in the Springs.

In a worst-case scenario, some retail properties could lose value, while a loss of tenants and rent payments could lead to property foreclosures — similar to what happened in the years after the Great Recession a decade ago.

But there's a mix of opinions about how bad conditions will get.

It's too early to draw conclusions about the retail market's fate because of the uncertainty of the economy and unknowns involving national chains, said Candace Seaton, a Quantum broker who specializes in retail properties.

Big boxes such as Costco, Home Depot and major groceries have remained open during the pandemic, but some smaller independent retailers and restaurateurs are fighting to hold on in the face of lost sales — showing "grit and guts," Seaton said. Nationwide, some mall owners are buying troubled stores to keep them as tenants in their centers.

John Egan, a commercial broker with NAI Highland in the Springs who also owns local strip shopping centers, said he hasn't seen as many problems with troubled retailers as he expected, and has been impressed with how restaurants have adapted to offer curbside and delivery service when their dining rooms were closed.

In fact, Egan said he's seen some cases in which retailers and restaurants now are looking to relocate and move into more attractive, well-located properties after they've become vacant. Much of that interest has come from local businesses, not national chains, he said. One example: seafood and steak restaurant Bonny & Read plans to add a sushi eatery in vacant space next door to its downtown location.

As a landlord, Egan said he deferred rents at some tenants' request, but told them they needed to apply for Paycheck Protection Program loans to help them cover expenses. But tenant problems weren't "catastrophic at all, nothing like I thought it was going to be."

Colorado Springs retailers and restaurants are in a good position to weather pandemic-related problems, Egan said. The area's housing market remains red hot and many people moving to the city will want places to shop and eat, he said. Three small, multi-tenant retail buildings he's developing in high-growth areas all are receiving strong interest on the part of retailers, he said.

Other retail industry brokers, however, are more pessimistic about the market's direction.

Jay Carlson, managing broker and principal with Front Range Commercial in Colorado Springs, said he expects more store and restaurant closings in the second half of the year as businesses and restaurants wrestle with ongoing pandemic-related financial hardships created by fewer customers and diners.

"You've seen a lot of closings already ... but I think there's a lot more coming," Carlson said. "We've yet to see the extent of that."

Many retail and shopping center landlords have tried to help tenants — allowing them to defer rent and possibly tack missed payments onto the end of a lease term, while asking them to at least pay common-area expenses such as taxes, insurance and maintenance, he said.

But some retail tenants continue to have trouble attracting customers. And if coronavirus cases were to spike again and the state required another round of business closings and restrictions, it would be a "death knell" for many retailers, Carlson said.

"Some of them don't have customers and aren't able to pay the rent," Carlson said. "Sooner or later, we're going to have to see a pretty big adjustment. That's why I think we have yet to see the worst of it."

Depending on the source, the local office vacancy rate in the second quarter was either 7.8%, 8.8% or 11.9% according to market reports by Quantum, national real estate firm CBRE and local brokerage Colorado Springs Commercial, respectively.

Despite those different estimates, the Quantum and CBRE reports say the vacancy rate in the second quarter fell from the end of 2019, while the Colorado Springs Commercial report shows a slight uptick. But all the reports suggest the office market is doing well even amid the pandemic.

Brad Bird, a vice president with the Springs office of CBRE, said the local office market has been helped by its strong mix of tenants. Unlike the Denver area, where energy companies have been hit hard by falling oil prices and downsized their staffs, Colorado Springs' military and defense contractors continue to need office space, he said.

In its report, Colorado Springs Commercial said there have been few cases of large office users looking to give back or vacate their space, even as many employees work remotely from their homes.

Dale Stamp, president of Quantum Commercial, said it's been status quo for office users with whom his brokerage has worked.

"Everybody's been paying rent," he said.

But don't expect many businesses to lease additional amounts of space during the second half of the year, Bird said. In addition to uncertainties created by the pandemic, some businesses will want to see the presidential election play out before they commit to leasing space, he said.

Going forward, some office users with expiring leases will have major decisions to make, Stamp said.

"That could change the dynamics of office buildings," Stamp said. "We may see some shifting around and people, instead of needing 10,000 square feet say, because we have people outsourcing now and can work from home, maybe we only need 6,000 or 7,000 feet. Everybody is kind of still up in the air."

Colorado Springs Commercial says in its report that the current presence of the U.S. Space Command headquarters in the city will draw government and defense contractors, who will seek large blocks of space for their employees. The Pentagon, however, hasn't yet decided if U.S. Space Command — which oversees the satellite efforts of all military branches — will have a permanent home in the Springs.

And while many employees have worked from home over the past few months, some businesses say they miss the exchange of ideas, production and collegiality that results from having workers together in an office, Bird said.

As a result, Bird expects employers to bring back workers to their offices, and that there might even be pent-up demand for office space.

The pandemic has done nothing to slow the demand for warehouses and other industrial buildings in Colorado Springs, commercial brokers say. In its second-quarter report, Quantum Commercial Group says the industrial sector's vacancy rate fell to 5.3%, down from 5.9% at the end of last year. Warehouse space by itself had a vacancy rate of just 3.6%, the report said.

Many businesses can have employees work from their homes, but industrial users must have physical surroundings for their products, said Andy Oyler, a Quantum broker.

"It's really hard to create a widget, store it and distribute it out of, say, your home," Oyler said.

Bird, of CBRE, said construction and development remains a backbone for the nation's economy, and builders and suppliers need space to store products and materials.

"That really hasn't paused that much, particularly in this market," Bird said.

Online buying and selling also are driving the demand for industrial buildings; businesses need storage and distribution space for their products, and national experts are predicting the nation will need 1 billion square feet of additional industrial space by 2025, said Randy Dowis, an industrial specialist with NAI Highland.

"E-commerce, that's blowing up all over the country," he said.

No. 1 U.S. neighborhood for housing? Look near Colorado Springs

And not all products are delivered by Amazon, which is building a massive fulfillment center near the Colorado Springs Airport that's scheduled to open in 2021. Third-party companies also are involved in making so-called "last mile" deliveries, he said.

The area around the Colorado Springs Airport has become ground zero for industrial space, whether it's e-commerce or more traditional products, Dowis said.

The Colorado Springs-area housing market sizzled during the dog days of summer, as home prices surged to another record last month.