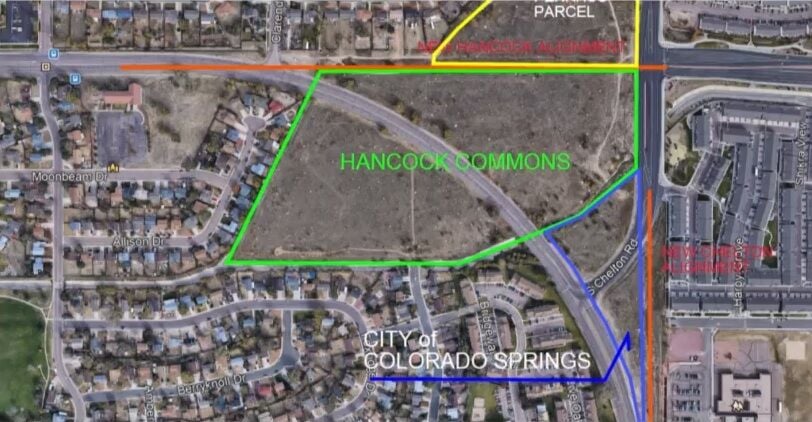 A vicinity map shows the approximately 20 acres of land on Colorado Springs' southeast side where developer Ray O'Sullivan wants to build the Hancock Commons. 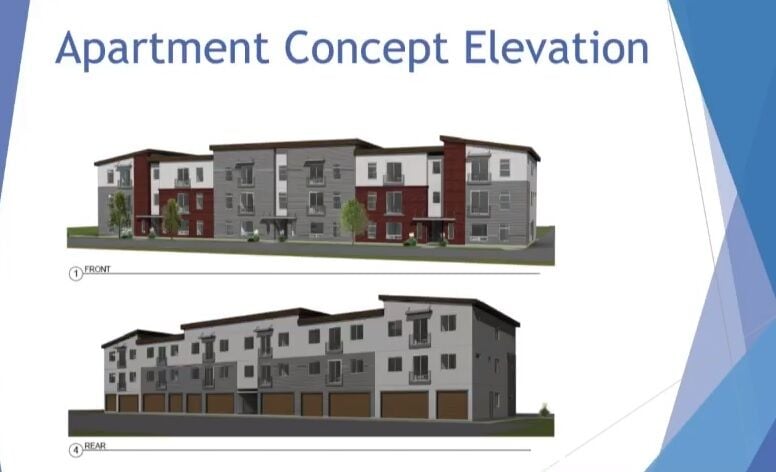 A conceptual design of apartment buildings planned to be constructed on a 20-acre parcel of land in the area of Hancock Expressway and Chelton Road on Colorado Springs' southeast side.

A developer plans to ask El Paso County to allocate about $2.6 million in future tax revenues to help build a new residential and retail venture on Colorado Springs' southeast side, he told county commissioners during a Tuesday work session.

Ray O'Sullivan of RJ Development wants to build the Hancock Commons on about 20 acres of undeveloped land at the southeast corner of Hancock Expressway and Chelton Road, a site the city has designated as an urban renewal area. The development will increase the availability of much-needed workforce housing in an area where new jobs are rapidly increasing, complete long-awaited infrastructure improvements and will fill a gap in retail establishments located on this side of the city, O'Sullivan said.

The project calls for constructing about 150 to 180 market-rate apartments and between 72 and 87 market-rate townhomes that could sell in the mid-$300,000s to low-$400,000s, he said. There are also plans to build between 12,000 to 14,000 square feet of commercial retail space where vendors like coffee shops, pizza parlors or breweries could go.

"I'm not sure how many of you have been on the southeast side just looking for somewhere to go for a cup of coffee or try a new microbrewery," Colorado Springs Urban Renewal Authority Executive Director Jariah Walker told commissioners. "They don't exist on the southeast side. ... The project checks some of those boxes and also creates a walkable environment for people in the community to be able to enjoy a cup of coffee or a slice of pizza."

Developers will also improve existing drainage to prevent the roadway from flooding, another sorely needed fix that has prevented development there in the past, Walker said.

"But for the urban renewal dollars, the project would not be able to go forward," he said.

It'll cost about $5.5 million to complete all the public improvements, O'Sullivan said. Hancock Commons will be located within a special tax district that will use bond money to help build it.

The site's designation as an urban renewal area also allows an increased portion of sales and property tax revenues generated from various taxing entities, such as the county, to be spent on public improvements at the site.

Commissioners generally supported the project, but Commissioner Longinos Gonzalez said he was concerned the developer and the county would be paying for improvements the city should be funding.

El Paso County residents will vote in November whether or not to extend a local 1% sales tax that funds regional and multimodal road projects for another 10 years. The extension of Hancock Parkway from Clarendon Drive to Chelton Road is listed as a non-priority project on the city's list of projects identified for this next round of possible funding.

"If a PPRTA project for the city was supposed to straighten (Hancock Expressway) out, they're pushing the costs onto the developer, which (El Paso County) would be participating in," Gonzalez said.

Walker did not address the concern with commissioners Tuesday.

Gonzalez requested more information from staff on the matter when the item comes before commissioners for a formal vote.