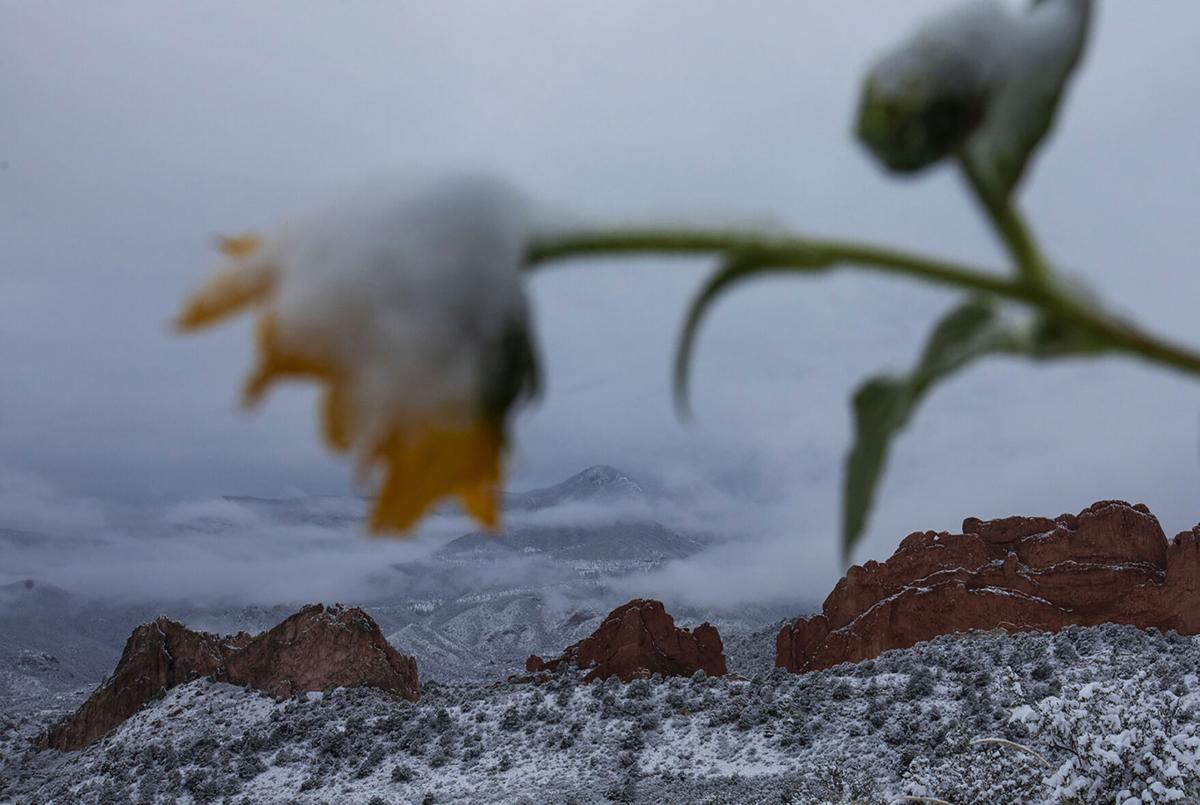 A sunflower is covered in snow overlooking Garden of the Gods Park in Colorado Springs on Wednesday morning, after early snow showers began on Tuesday, just two days after the hottest day of the year. A winter weather advisory and freeze warning are in effect until noon, according to the National Weather Service in Pueblo.(Chancey Bush/ The Gazette) Expect a "rough" winter this year as the COVID-19 pandemic intensifies, but ultimately the Colorado Springs and Colorado economies will recover stronger and faster than the rest of the nation, economist Tatiana Bailey says.

Colorado Springs has enjoyed a stronger recovery than most  after state restrictions to slow the pandemic shut down many businesses and triggered massive layoffs. But Bailey, director of the University of Colorado at Colorado Springs Economic Forum, expects the local economy to take a step backward this winter as the virus resumes its rapid spread when people head indoors during colder weather.

Bailey will give her presentation on the local economy, "Things are Different This Year!," during the economic forum's annual forecasting event Thursday. The three-hour virtual online event also will include a keynote presentation by futurist David Nelsen on national conditions, disruption and the “new normal,” and a presentation by Aikta Marcoulier, executive director of the Pikes Peak Small Business Development Center, on local small-business resiliency .

Once the winter spike in COVID-19 cases subsides, Bailey said the local economy is "well-positioned" to resume its rapid recovery, based on strong growth in its construction, health care and defense contracting industries that have weathered the pandemic with few job losses.  By August, the Colorado Springs area had recovered nearly three-fourths of the jobs lost during the pandemic, compared with 57% for the Denver area and 25% for Boulder.

"We will have a  tough six to 12 months, but the Colorado Springs economy will emerge a little faster and stronger than the rest of the nation," Bailey said. "Not only will the virus resume spreading as the weather gets colder and people head indoors, but without more fiscal spending, 2021 will be rough because a lot of the federal programs that softened the blow during the pandemic have expired or will expire by the end of the year."

Bailey is worried that many workers in the hotel, restaurant and airline industries who are on temporary layoff will lose their jobs permanently in coming months with those industries slow to recover , especially with business travel and meetings curtailed. The Colorado Department of Labor and Employment estimates about half of the more than 200,000 unemployed workers in August were on furloughs or temporary layoffs.

Economic recovery will take a while, Colorado Springs economists say

While the number of first-time unemployment insurance claims has declined sharply in the past month or so, Bailey said the number of people still collecting benefits — called continuing claims — has been declining at a much slower rate. That means unemployed workers haven't found other jobs or been called back to work by employers. That has kept the state's unemployment rate at 6.7% in August, or more than twice the record low 2.5% reached in February before the pandemic hit the state.

Bailey's forecast this year doesn't include charts predicting the unemployment rate, job growth, housing construction and other major indicators. She said she wouldn't believe her forecast if it included such numbers because "there are way too many unknowns."

What: University of Colorado at Colorado Springs Economic Forum

Fed economist: Spread of virus will dictate path of recovery