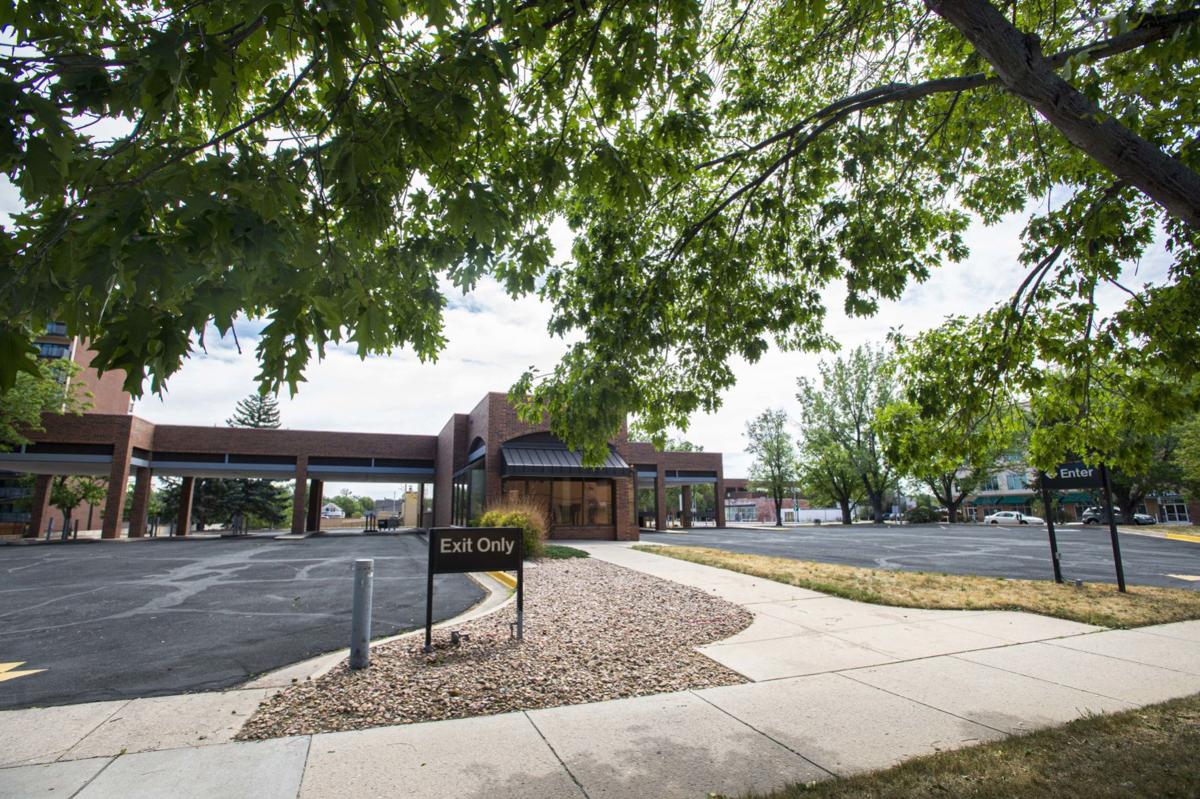 A vacant U.S. Bank building and drive-thru at Pikes Peak and Wahsatch avenues in downtown Colorado Springs, along with a nearby building that houses Pikes Peak Post 4051 Veterans of Foreign Wars, would be demolished to make room for a six-story, 320-unit apartment complex planned by Greystar Real Estate Partners of Charleston, S.C. The company has proposed to begin construction next year and complete the project in 2023. 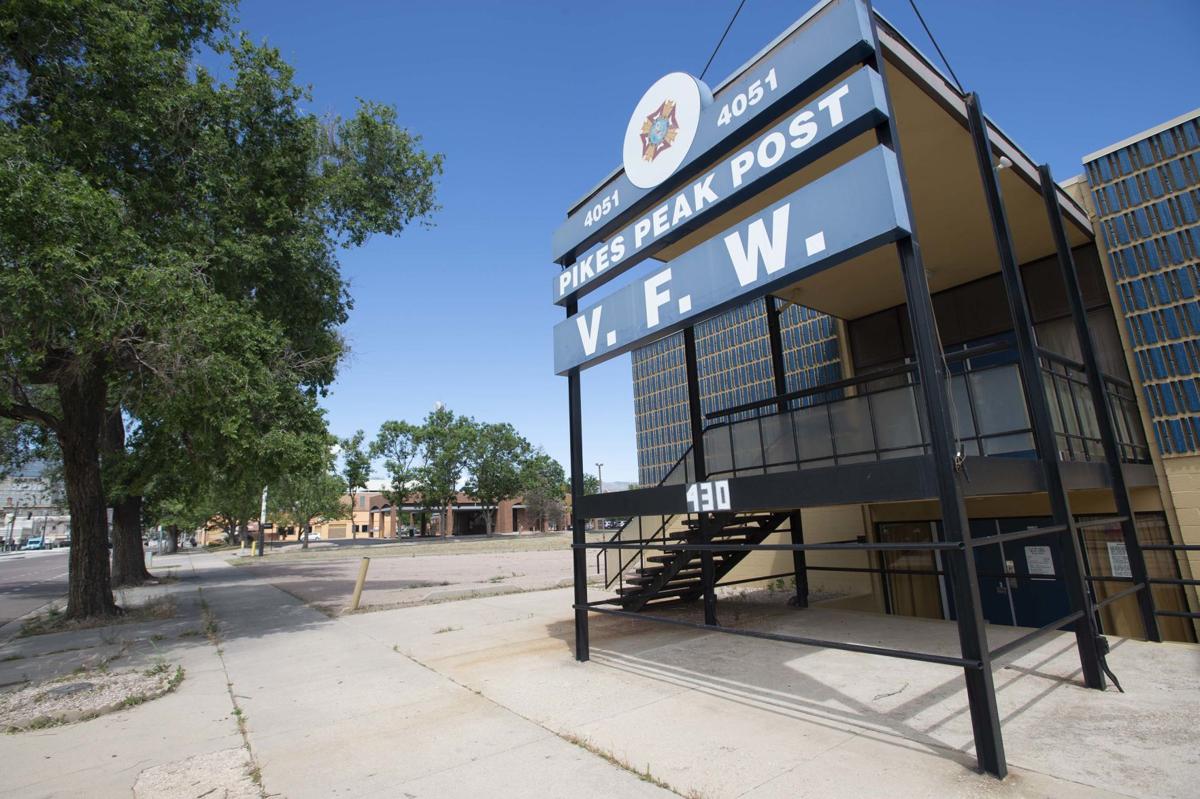 A more than 60-year-old building that houses Pikes Peak Post 4051 Veterans of Foreign Wars and a vacant U.S. Bank building and drive-thru, northeast of Pikes Peak and Wahsatch avenues in downtown Colorado Springs, would be razed to make room for a six-story, 320-unit apartment complex proposed by Greystar Real Estate Partners of Charleston, S.C. The company has contracted to buy the bank property, but still must reach a deal with the VFW post. CHRISTIAN MURDOCK, THE GAZETTE

One of the nation's biggest apartment companies plans to build what would be downtown Colorado Springs' largest apartment project.

Elan at Pikes Peak, as it would be called, would join several multifamily projects built or proposed in recent years or that are under construction by developers who say they're bullish on the Springs' downtown.

At the same time, developers say they want to meet the demands of growing numbers of renters seeking an urban lifestyle — the ability to walk and bike to nearby restaurants, bars and coffee shops.

"Greystar, being a leading developer of multifamily nationwide, there's not a better indicator for really a strong, healthy and attractive market," said Alex Armani-Munn, economic development specialist for the Downtown Partnership advocacy group in Colorado Springs. "We see this as a win, not just driving housing, but further establishing downtown as a great market for development."

As proposed, Greystar would raze a vacant U.S Bank building and drive-thru at the corner of Pikes Peak and Wahsatch and demolish a building to the east that houses the Pikes Peak Post 4051 Veterans of Foreign Wars, according to documents the company has submitted to city government planners.

The VFW building opened in 1956 and was expanded 20 years later, according to the post's website. The bank was constructed in 1977, El Paso County land records show.

In their place, Greystar would construct its apartment building and nearly 400 parking spaces on 2.3 acres. The building would have a mix of studio, one- and two-bedroom units, ranging from 465 to 1,280 square feet and renting for market-rate prices. The average Colorado Springs rent in the first quarter of this year was just over $1,200.

Project amenities would include a clubhouse, fitness center, pool and almost 20,000 square feet of outdoor courtyard space, planning documents show. Greystar expects to start construction next year and open its first units in early to mid 2023.

The project, however, still has at least one hurdle to clear.

Greystar has contracted to buy the former U.S. Bank property, which has been vacant for about eight months, a bank spokesman said.

But while Greystar has discussed the purchase of the VFW building and negotiated a deal with members of Pikes Peak Post 4051, the company hasn't yet contracted to buy the property, said Christopher Linski, the post's commander.

The post has about 600 active members, and, before the COVID-19 pandemic, the building was used regularly for dinner dances, meetings and other events, Linski said. Members range in age from their late 20s to their upper 90s, with an average age of 70, he said.

A two-thirds majority of post members who attend a July 4 meeting must vote whether to approve the sale of the property, Linski said.

"We're trying to figure out our strategic plan for our next five to 10 years of the post, and figure out if a new facility or changing venues at all would be beneficial to us," Linski said. "So we've had a lot of discussions among our active members and trying to figure out what our post wants into the future."

No decisions have been made about where the post might move if members agree to sell, he said.

Greystar did not provide further detail in an email to The Gazette.

Based on talks with Greystar, however, the Downtown Partnership is confident the company will proceed with its project even if it doesn't reach a deal with the VFW post, Armani-Munn said.

"We know that if they don't get the VFW property under contract that they have alternative development plans and designs that they can move forward with, with just the U.S. Bank property," Armani-Munn said.

In its proposal to city planners, Greystar lauded Colorado Springs, its outdoor lifestyle, strong economy, quality education and its ranking by U.S. New & World Report for two straight years as the nation's most desirable place to live.

"The current supply of high-quality residences in the urban core does not meet the demand of a growing population of highly educated, outdoor enthusiasts seeking the lifestyle Colorado Springs and Elan Pikes Peak have to offer," Greystar said.

Greystar is seeking financial assistance for its project through the Downtown Development Authority, a quasi-governmental agency that promotes downtown interests. The downtown site also is part of a federal opportunity zone, which offers tax breaks to investors who fund projects inside the zone's boundaries.

Greystar's 320 units would be the most for any single apartment project in downtown, said Ryan Tefertiller, the city's urban planning manager.

Among other large downtown developments, a Denver and Colorado Springs group plans the 217-unit Pikes Peak Plaza for 2022; Weidner Apartment Homes of suburban Seattle has proposed 200 units that could open the same year; and Nor'wood Development Group and Griffis/Blessing of the Springs will open the 177-unit Mae on Cascade this summer after opening their 171-unit 333 ECO apartments in 2018.

"One of the ongoing goals of the downtown master plan is to add more residential densities," Tefertiller said. Greystar's project, he added, "is certainly a big step in the right direction."

Downtown Colorado Springs has seen its fortunes rise in recent years. Among other pluses, the Tejon Street retail corridor boasts several restaurants, nightclubs and stores; the U.S. Olympic & Paralympic Museum is expected to open this summer; and a multiuse outdoor stadium on the southwest side and an indoor arena at Colorado College are scheduled to debut next year.

The addition of apartment projects such as Greystar's proposal gives downtown an even bigger boost, Armani-Munn said. The project will generate more property tax revenue than the current buildings on the site, while its renters will eat and shop downtown and drive sales tax collections in the area, he said.

At the same time, the location of Greystar's project will help enhance redevelopment efforts along Pikes Peak Avenue and on the eastern edge of downtown.

"It represents the exact type of redevelopment and infill development that we love," Armani-Munn said

Founded in 1993, Greystar manages and operates an estimated $160 billion in real estate in nearly 200 global markets, according to the company's website. It has an office in Denver as part of operations in the United States and around the world.

The company ranked No. 1 in the nation for 2020 with almost 493,000 units managed, according to the National Multifamily Housing Council, an industry trade group. Greystar also ranked No. 2 last year with just over 7,000 units started.