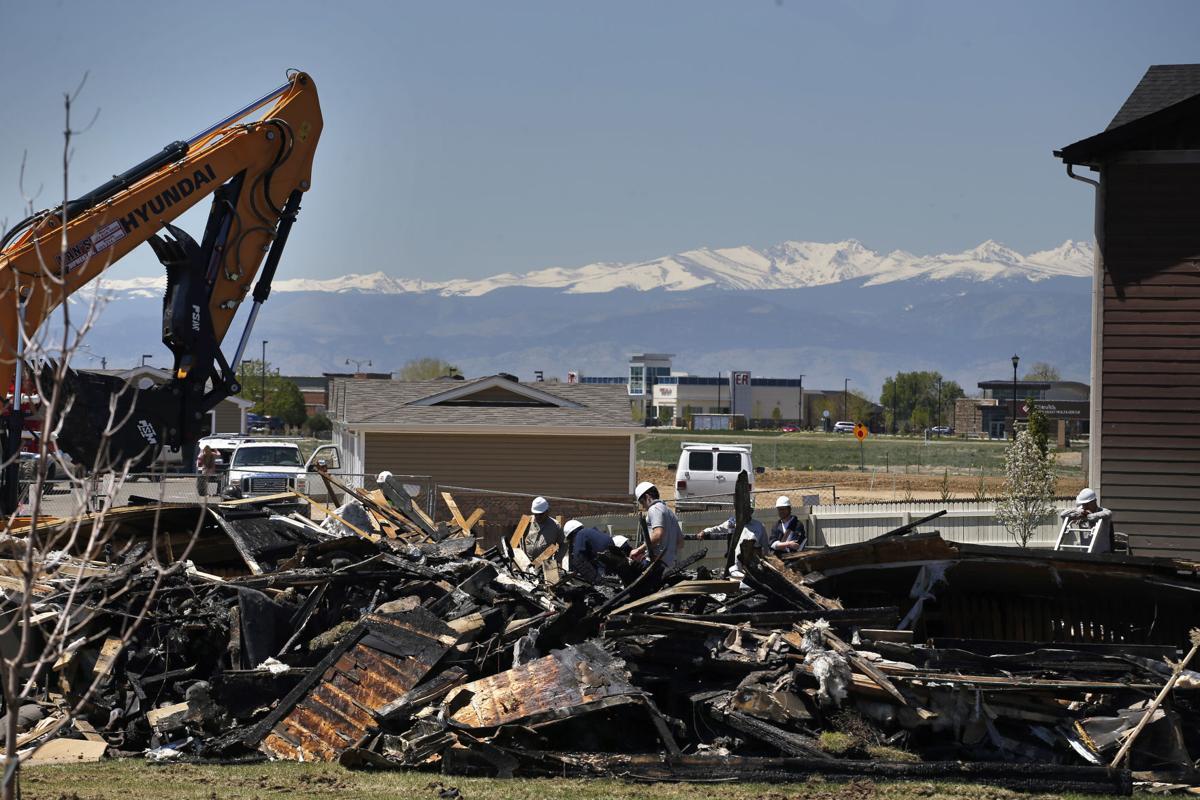 Workers dismantle the charred remains of a house in 2017 where an explosion killed two people in Firestone. A shareholder lawsuit alleges Anadarko Petroleum was focused on keeping old wells running, not fixing potential safety problems in the months before the fatal house explosion. 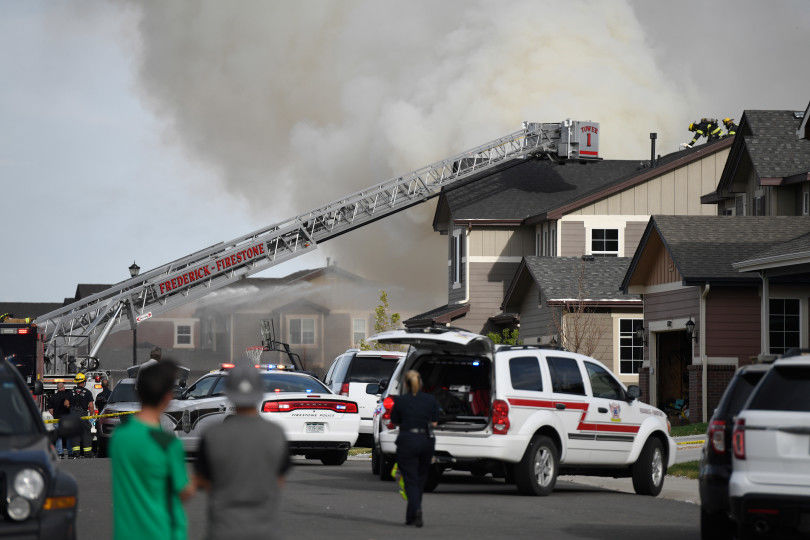 FIRESTONE, CO - APRIL 17: Federick-Firestone FD respond to a report of a house explosion on Twilight Ave on April 17, 2017 in Firestone. There was a report of on person taken to the hospital. (Photo by John Leyba/The Denver Post via Getty Images)

Workers dismantle the charred remains of a house in 2017 where an explosion killed two people in Firestone. A shareholder lawsuit alleges Anadarko Petroleum was focused on keeping old wells running, not fixing potential safety problems in the months before the fatal house explosion.

FIRESTONE, CO - APRIL 17: Federick-Firestone FD respond to a report of a house explosion on Twilight Ave on April 17, 2017 in Firestone. There was a report of on person taken to the hospital. (Photo by John Leyba/The Denver Post via Getty Images)

Anadarko Petroleum, the largest oil and gas driller in Colorado over the last decade, engaged in a multibillion-dollar fraud against investors by overstating and misrepresenting economic prospects in its oil field in the Gulf of Mexico, according to recently unsealed court documents in a lawsuit.

The litigation is one of two federal lawsuits filed within the past three years to allege Anadarko misled investors. A class-action lawsuit filed in 2018 alleged the company cut corners and knowingly violated rules and laws, setting up conditions that led to a fatal home explosion in April 2017 in Firestone. That accident helped propel legislators last year to overhaul Colorado’s regulations guiding oil and gas development.

The unsealed documents over the Gulf of Mexico allegations show that a former Anadarko engineer, Lea Frye, who is working as a wildlife photographer in Buena Vista, contends Anadarko made her work conditions so intolerable she resigned after she tried to warn federal authorities of alleged fraud.

A federal judge in 2018 dismissed Frye’s lawsuit, which claimed she was subjected to workplace retaliation after becoming a whistleblower. A four-judge panel of the 5th Circuit of Appeals of New Orleans, in a ruling unsealed this month, upheld that dismissal but ordered the lower court judge to reconsider whether the engineer can make public a complaint she filed with the U.S. Securities and Exchange Commission.

The SEC complaint, which remains under seal, alleges Anadarko executives fraudulently engaged in a “multibillion-dollar exaggeration” when they knowingly touted incorrect projections for the value of the Shenandoah oil field, about 170 miles off the cost of Louisiana, the appellate ruling states. About a year after Frye filed her complaint with the SEC and resigned, Anadarko wrote off hundreds of millions of dollars of losses on the Shenandoah project, the appellate ruling adds.

Frye filed her lawsuit in 2017 in the U.S. District Court of Houston, and her complaint remains under seal. The appellate court ruling, which was unsealed last week, states that Frye was a senior reservoir engineer and team lead for the Shenandoah project, south of Louisiana’s Port Fourchon.

Frye maintains that company officials exaggerated findings from appraisal wells in the Shenandoah, according to court records. She said they concealed bad reports about those wells and described the wells to investors in “glowing terms” and repeated past optimistic projections without revealing new data indicating the appraisal “was vastly overstated.”

Frye, who declined to comment, also alleges company officials excoriated her after she refused to falsify maps inflating the value of the oil field and appraisals.

She claims that in August 2014 emails, an Anadarko vice president was “adamant” that she and others conceal her mapping and analysis, and instead use false maps to boost the value of the oil field, according to the appellate ruling.

Gerard Pecht, legal counsel with Occidental Petroleum, which bought Anadarko for $38 billion in March, declined to comment on the documents. He is listed as lead legal counsel for the defense in the case. Frye’s lawyer, David Minces, of Bellaire, Texas, also declined comment.

In 2006, Anadarko became the biggest oil and gas firm in Colorado, and the fifth largest producer in the nation, after it completed transactions buying out Oklahoma City-based Kerr McGee and Denver-based Western Gas Resources.

The class-action lawsuit filed after the fatal explosion in Firestone alleged Anadarko failed to disclose to investors that it was out of compliance with environmental and health and safety regulations. An investigation by the National Transportation Safety Board determined the fatal blast in Firestone, which killed Mark Martinez and Joey Irwin, likely resulted when developers cut a pipeline connected to an Anadarko gas well.

That federal investigation found a previous owner of the well, Denver-based Patina Oil and Gas, recorded in 1999 that it had properly abandoned the flowline — pipes connecting wells to surrounding equipment. Records from the Colorado Oil and Gas Conservation Commission showed that had not occurred, the NTSB found. Anadarko acquired the well in 2013, and two years later temporarily shut it in, but the investigation found the well had not been abandoned and the flowline had not been plugged.

The class-action lawsuit alleged the pipeline lapse in Firestone was one of about 2,400 instances in which Anadarko failed to follow state rules requiring the company to seal off abandoned flowlines. The lawsuit, which included statements from six former high-ranking Anadarko employees that the company put profits over safety, was dismissed last year. The company separately settled in May 2018 for an undisclosed amount in wrongful death claims from relatives of the men who died before a lawsuit was filed in court.

Frye’s litigation revolves around whether Anadarko improperly inflated the value of its Shenandoah field in the Gulf as a “$2-$4 billion net opportunity” to boost the value of the company and then later wrote off hundreds of millions of dollars of losses.

Another company, Houston-based Cobalt International Energy, which was a 20% investor in the project, filed for bankruptcy protection. Cobalt invested $236.7 million in the Shenandoah project and eventually sold its ownership stake for $1.8 million, Cobalt’s annual reports show.

The accusations from Frye are detailed in the ruling from the 5th Circuit Court of Appeals in New Orleans. Many documents filed in the case remain under seal, but the ruling, issued in November, show that Frye filed a whistleblower complaint with the U.S. Securities and Exchange Commission alleging systemic fraud on investors by Anadarko. In response to a Freedom of Information Act request from The Gazette/Colorado Politics, the SEC declined to make public Frye’s complaint or how the complaint was handled.

A panel of four judges with the 5th Circuit Court of Appeals declined to overturn U.S. District Judge Lee Rosenthal’s May 2018 ruling dismissing Frye’s claim that Anadarko illegally retaliated against her for reporting alleged fraud against shareholders by Anadarko to the SEC. Rosenthal ruled that Frye had resigned, and that there was not sufficient evidence of retaliation during the 10 days between her report to the SEC and her resignation.

While upholding Rosenthal’s ruling on retaliation, the appellate judges ordered Rosenthal to hold further proceedings on whether Frye can reveal to shareholders her SEC complaint without fear of being sued by Anadarko for violating a confidentiality agreement she signed as part of her employment.

Frye sought to convince the appellate judges that the company had a pattern of punishing her that occurred before the SEC complaint. The appellate panel held that issue had not been raised at the lower court level, and therefore her argument that she had been subjected to continuous violations could not be considered.

The lower court judge has since ordered the lawyers representing Frye and Occidental Petroleum to meet and confer over whether the SEC letter can be disclosed to the public.

About a year after her resignation, Anadarko abandoned the Shenandoah project and wrote off its losses, the appeals court said in the ruling. When Frye asked Anadarko whether she could share the information she had submitted to the SEC with shareholders, Anadarko warned that the information was proprietary and told her lawyer that disclosure would violate her disclosure agreement, the appellate judges noted.

Tuesday’s National Transportation Safety Board report on the April 2017 explosion in Firestone that killed two and injured two points to failures by the owners of the flowline that leaked methane into a Firestone home.