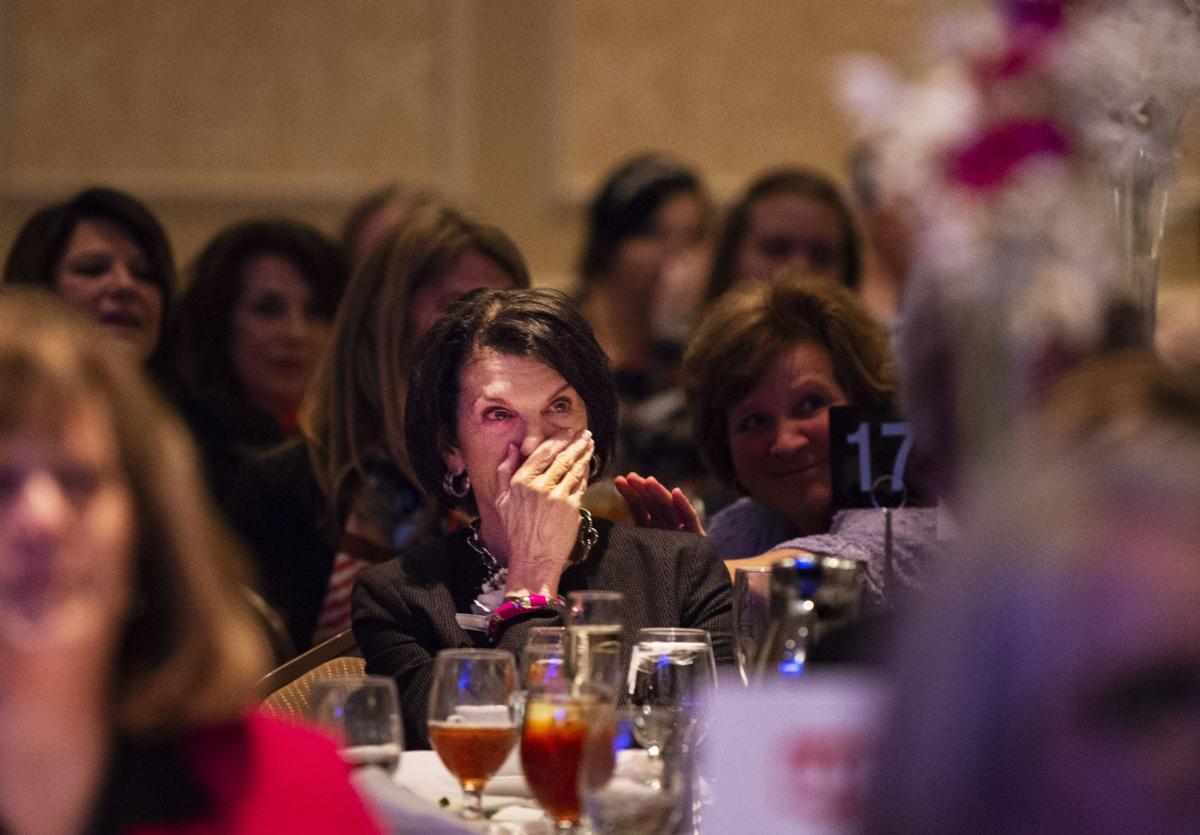 Karla Grazier reacts as the video of her begins to play, announcing her as the recipient of the 2019 Athena Award at The Antlers. Grazier is the president and CEO of Discover Goodwill of Southern and Western Colorado. This year's presentation is being delayed. 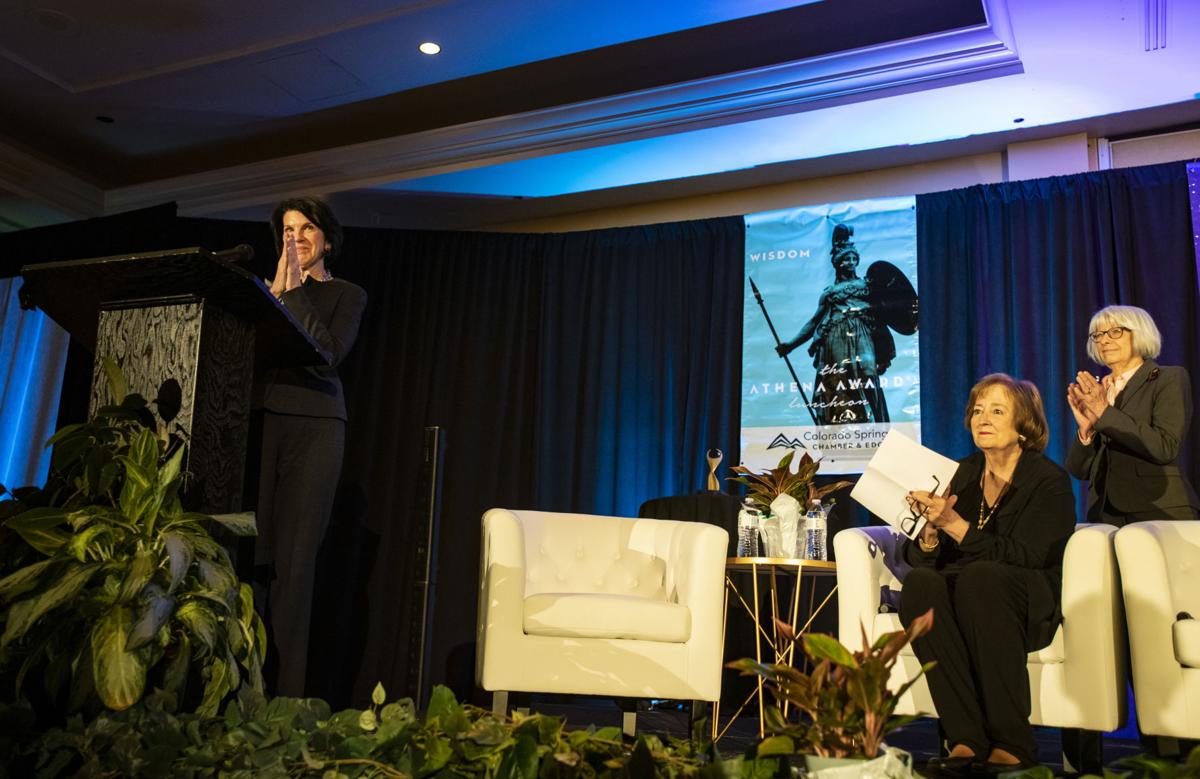 Karla Grazier reacts as the video of her begins to play, announcing her as the recipient of the 2019 Athena Award at The Antlers. Grazier is the president and CEO of Discover Goodwill of Southern and Western Colorado. This year's presentation is being delayed.

Nothing great was ever achieved by being realistic, says Karla Grazier, the president and CEO of Discover Goodwill of Southern and Western Colorado.

If she had been realistic, Grazier might never have moved to Colorado Springs, where for nearly a quarter century she’s offered business, leadership and mentoring skills to the community.

Grazier said she was a successful New York City banker when she switched careers to become an entrepreneur. She and a partner launched a snack-food manufacturing company in the Bronx.

“A tough environment,” Grazier said. “Manufacturing is not easy. To this day I wonder what I was thinking. We made it successful, but if I had been realistic, I’d stay in the banking world in New York City and that’s what I would have done probably for the rest of my life.”

She left the company after it went public, and Grazier and husband Ward Berlin researched a dozen Western states to find a business to purchase.

In 1996, they moved to Colorado Springs where they were attracted by the opportunity to buy a catalog company and by the community’s smaller size. They started a second company that offered call center and fulfillment services to catalog firms, and eventually sold both.

Grazier became involved with the boards of a variety of organizations, including Discover Goodwill, then known as Goodwill Industries of Colorado Springs. She served as a Goodwill board member and chairwoman. In August 2010, she became the nonprofit’s president and CEO after holding the posts on an interim basis.

Now, she leads a workforce with 1,400 employees and whose programs serve 75,000 people annually.

For her work with Goodwill and community dedication, Grazier was named the recipient Thursday of the 2019 Athena Award, which honors businesswomen for professional excellence, community service and mentorship of other women. The award was presented during a Colorado Springs Chamber & EDC luncheon at the downtown Antlers hotel.

“I’ve seen her get involved in so many different things, not just in her work at Goodwill, but she’s always happy to help people problem-solve or to collaborate with them,” said Lynne Telford, president and CEO of the Care and Share Food Bank for Southern Colorado and a past Athena recipient, who added that Grazier “exudes leadership and confidence. She’s really a role model for so many people.”

An Indianapolis native, Grazier received a bachelor’s degree in anthropology from the University of Notre Dame and a master of business administration in finance and accounting from Indiana University.

Among various roles, she’s served with the Colorado State Workforce Development Council, Colorado Rehabilitation Council and Pikes Peak Workforce Investment Board of El Paso and Teller counties. She’s also served on the board of Goodwill Industries International, including as chairwoman in 2017-2018.

As Discover Goodwill’s president and CEO, she obtained territory rights to add 16 counties in Colorado, extending the organization’s reach from Kansas to Utah. She led a nearly $11 million project to consolidate Discover Goodwill’s programs and operations into a new campus and oversaw the opening of stores in Pueblo, Monument, Durango, and Colorado Springs.

In 2012, Grazier launched Discover Goodwill’s Possibilities, a first-of-its-kind program that teaches essential life skills and provides community integration opportunities for individuals with intellectual disabilities. Goodwill Industries International awarded her its 2016 Watkins Award for Mission Achievement for her work in launching the program.

Grazier’s dedication “is evident in the impact her leadership of Discover Goodwill has had on tens of thousands of individuals annually, via programs that help seniors, the financially disadvantaged and individuals who have intellectual and developmental disabilities live more independently,” said Aileen Berrios, senior vice president of 5Star Bank and a Discover Goodwill board member.

Grazier called her work with Goodwill, “the best job I’ve ever had in my life. ... You’re helping people every day. And I’m using my brain and my heart to do that.”

While the Athena Award is a personal honor, Grazier said she hopes it shines a spotlight on Discover Goodwill’s role in the community.

“People just think of us as stores,” she said. “But indeed in our stores, the majority of the people we employ have barriers to employment. So we have a great impact and I’m sometimes frustrated that people just think of as stores and don’t know all the good work we do.”

Athena nominees are nominated by their peers and judged on a points system by a panel of past recipients.

In addition to Grazier, this year’s nominees were:

Megen Schlesinger, the Center for Technology, Research and Commercialization;

A new generation of leaders is taking over El Pomar Foundation for the first time in more than 45 years at a time when the charity is emphasizing it can help meet needs in Colorado Springs with more than just money.