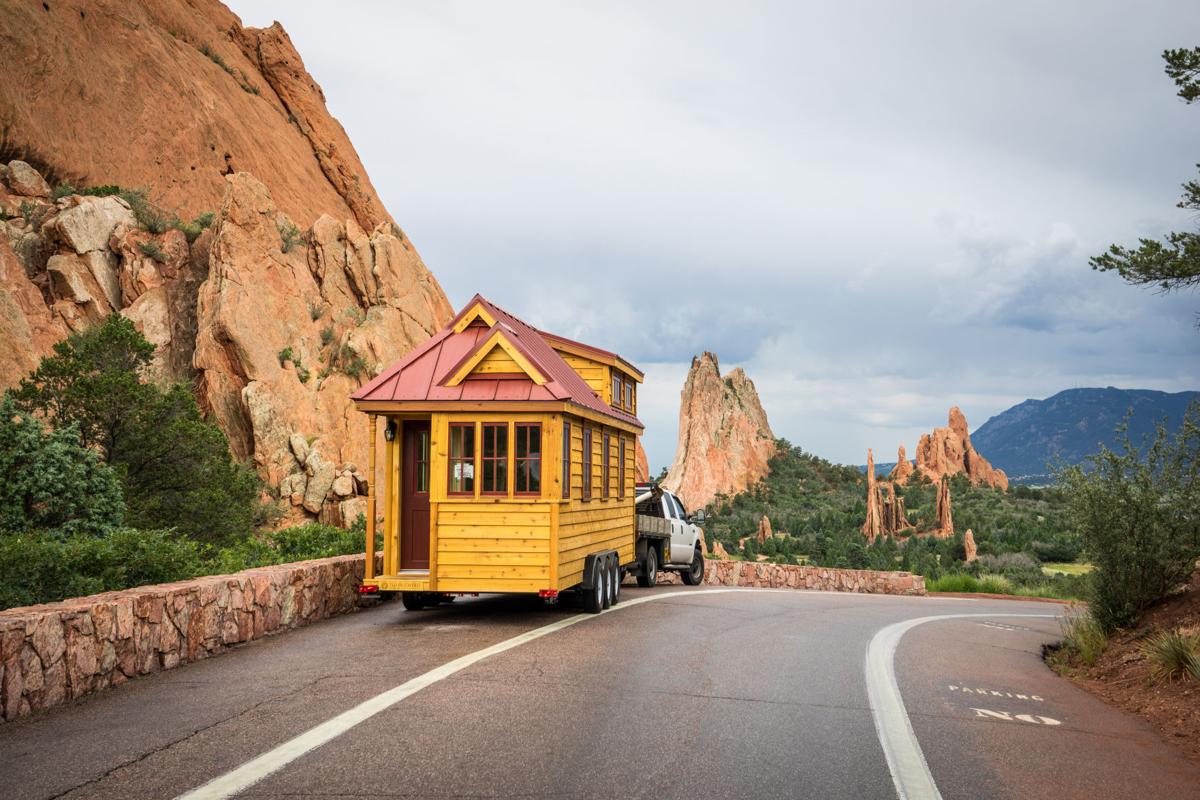 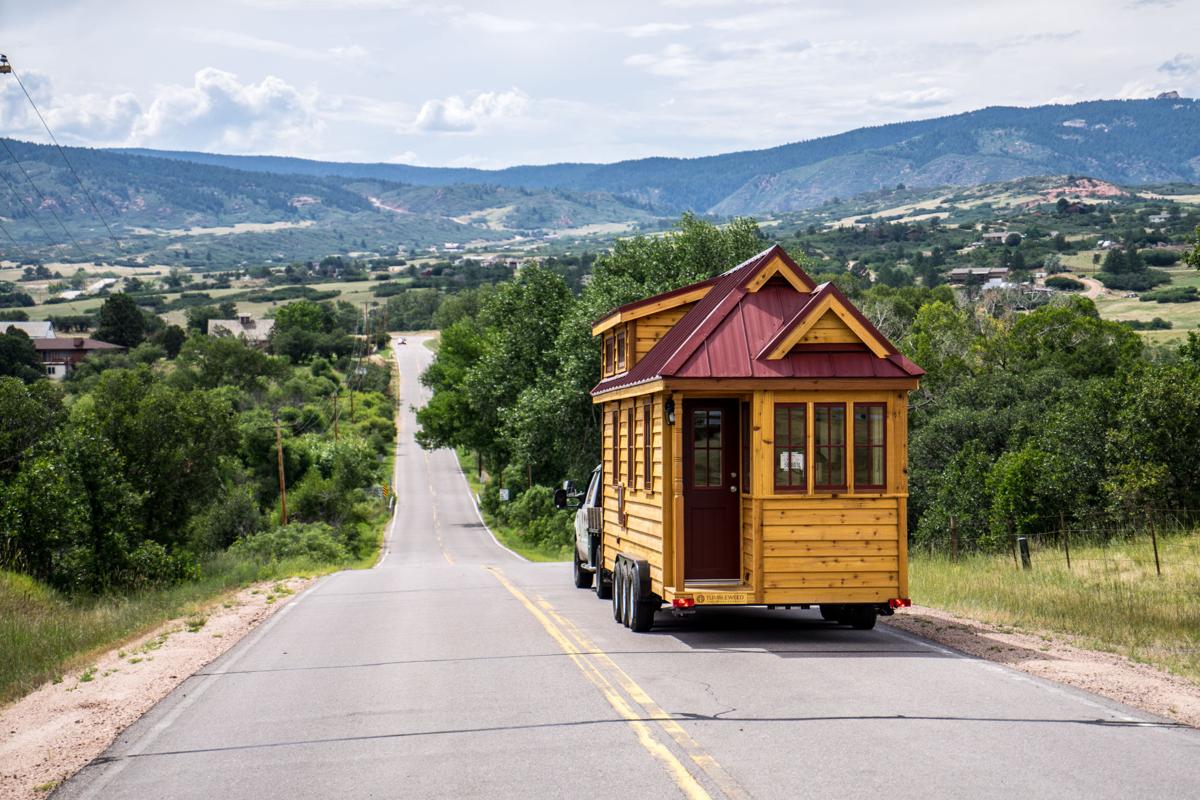 As the real estate market takes off in Colorado Springs, some local builders aren't thinking big. They're thinking tiny.

Instead of using trenches and foundations, these builders are making 180-square-foot luxury homes atop trailers. And Colorado Springs, home to the largest manufacturer of tiny homes in the country, is quickly becoming the epicenter of the national movement that encourages finding freedom through the smaller price tags that come with these smaller homes.

Colorado Springs was host to the 2015 national Tiny House Jamboree, which organizers say brought 40,000 visitors to the area. The city will host the national jamboree again Aug. 5-7 at the Western Museum of Mining and Industry.

The market for tiny homes, and tiny home builders, is growing as more people learn about the homes through word of mouth or shows like "Tiny House, Big Living" on HGTV. Also, builders say it's being fueled as the real estate market recovers across the country.

Building permits for single- family homes in El Paso County were up almost 28 percent over the same month last year, according to the Pikes Peak Regional Building Department. That same month, members of the Pikes Peak Association of Realtors reported 1,497 home sales - the most recorded for any single month.

As demand goes up, so too do prices.

In May, the median price of a single-family home in Colorado Springs was $262,000, according to the Pikes Peak Association of Realtors. That price, while lower than that of Denver, can still be too much for young families or those just starting out in their jobs.

"Typically the most common reason people want a tiny house is financial" said Greg Parham, owner of Rocky Mountain Tiny Houses in Durango. "Especially young people in Colorado where real estate is so expensive. They can't get ahead, they can't own something. They see the tiny house as a way to change that and own a piece of the pie and start putting money in savings."

That said, modern-day tiny homes can get pricey as owners request fancy upgrades (Tumbleweed once installed a $15,000 Japanese bed inside a tiny house, Hall said). The average customized home that Tumbleweed sells is about $70,000. Parham said he has an order to build a home this summer that will cost the owners about $85,000.

"It will be 24 feet long and will be pretty tricked out," he said. He has been getting orders for homes as long as 30 feet with hardwood floors, luxury appliances and ceilings made from beetle kill pine.

"The mentality is that if you are going with less space, you go for more quality," he said. This kind of luxury is a step up from the roots of the movement that started with do-it-yourselfers who wanted to build their own small house for a fraction of the cost of a traditional home.

Businesses started popping up when some of the DIYers needed a little help. Tumbleweed's business started out by providing the DIYers plans to build tiny houses, instructional videos and even offered classes to teach them.

But even with that support, some people who wanted a tiny house didn't trust their own construction skills and asked Tumbleweed to build the tiny house for them.

"A lot of people said, 'I love Tumbleweed homes, but I don't know how to swing a hammer, can you do this for me?' " Hall said.

So the company started contracting out its plans to builders across the county. The company ended up starting its own manufacturing side of the business thanks to a contractor in Colorado Springs.

"One of the builders in Colorado Springs was a cut above the rest," Hall said. "It was a family business that had started out with chicken coops and sheds but could build our homes faster, at a higher quality and at a better price. We started giving them more and more business to the point where they suggested we partner together. That was about a year ago that we started the manufacturing in-house ourselves, and it's taken off like a shot since then."

He said the company makes about 125 tiny houses a year in Colorado Springs, which makes it the nation's largest manufacturer of tiny homes in the country, he said.

"The reality is that we are the only manufacturer," Hall said. "Other places that build them are so small that you can't really compare."

On the smaller side of the tiny house movement are builders like Parham. He is an architect who designed and built his own tiny house when he realized he could use his expertise in this emerging building market. He now has nine employees who build about 20 houses a year.

"There's a lot of interest," he said. "We're having to turn people down right now. We just can't keep up with the demand."

There are challenges the builders are still working to overcome. Since tiny homes are a bit of a hybrid of mobile homes, RVs and traditional homes, many municipalities aren't sure how to classify them for zoning purposes. Many tiny home owners buy their own land to park on or rent out space in RV parks. Others, like Parham, go a little rogue in finding a spot.

"I have to fly under the radar where I have my house parked," he said. "I just lucked out and got a sweet spot. Boulder County is the worst place in the state to park a tiny house."

In the Colorado Springs-area, Hall said that many tiny home owners choose to park permanently in RV parks. All Tumbleweed homes are certified RVs, which helps municipalities classify them and helps for financing, he said.

Another tiny home challenge is convincing owners that they can downsize enough to live in about 200 square feet or less. To help potential owners try it out, Tumbleweed lets them rent out the homes by night at Garden of the Gods RV Resort, 3704 W. Colorado Ave., Hall said.

Parham recommends that owners know what they are getting into before they make the investment.

"I'm a simple person; I don't have a lot of belongings," he said. "For my lifestyle, it works. But I'll be the first to tell you that it doesn't work for everybody."