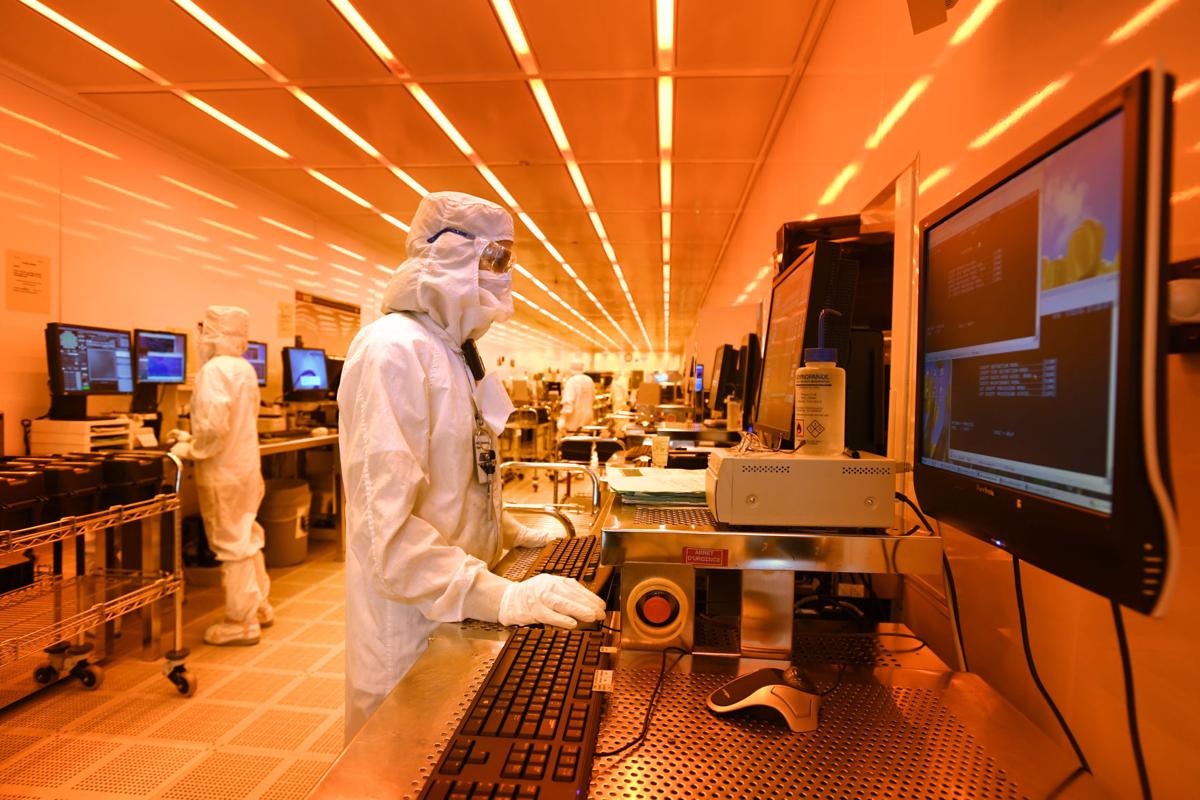 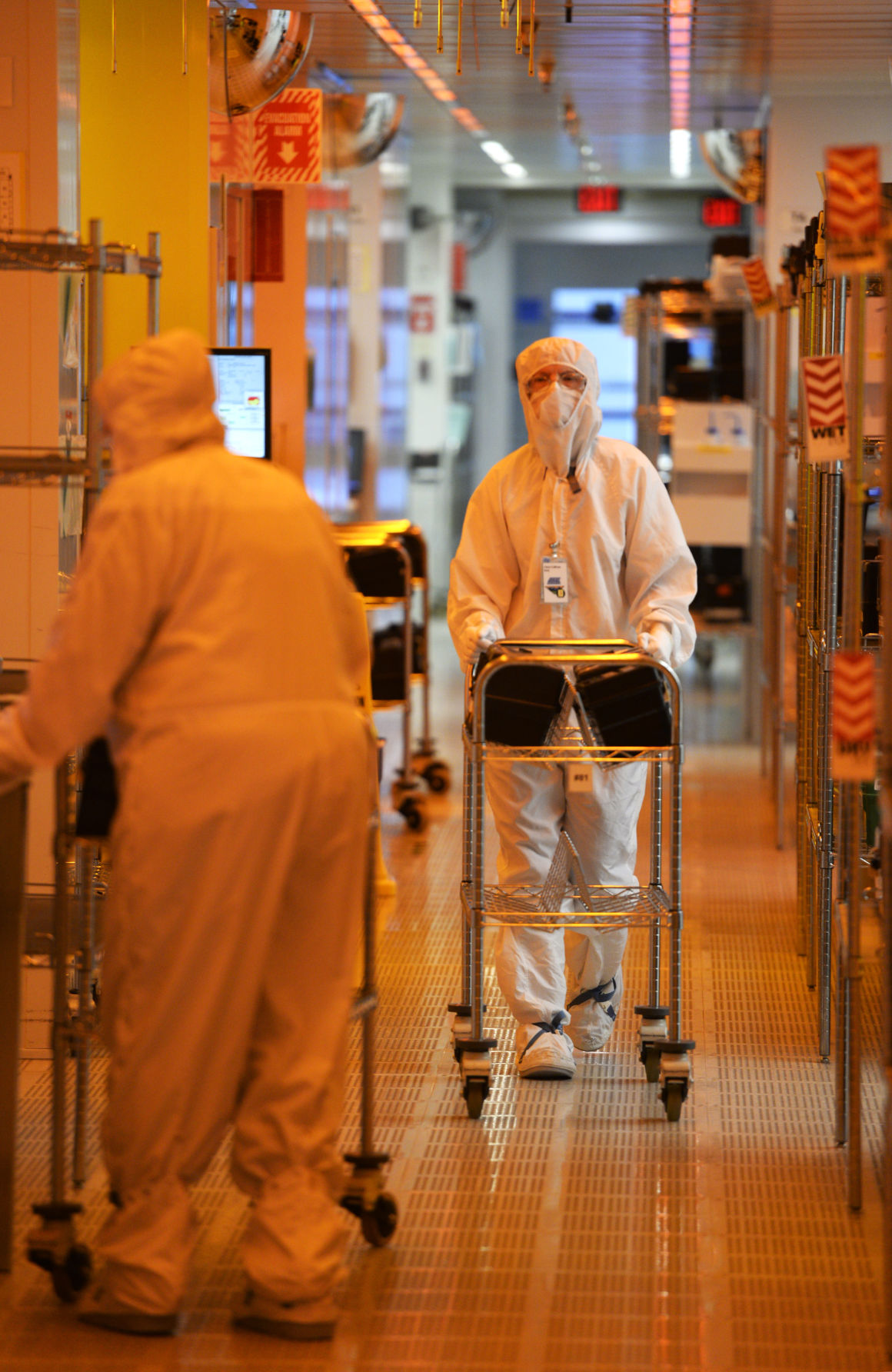 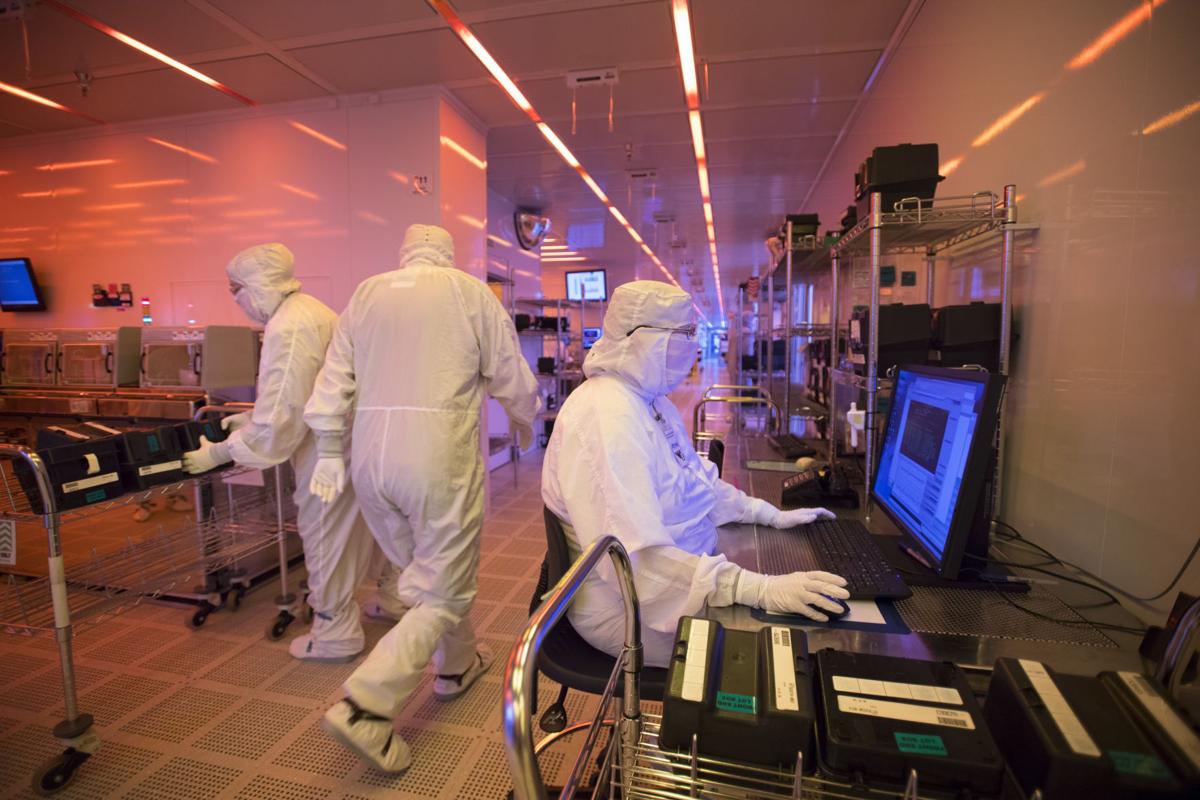 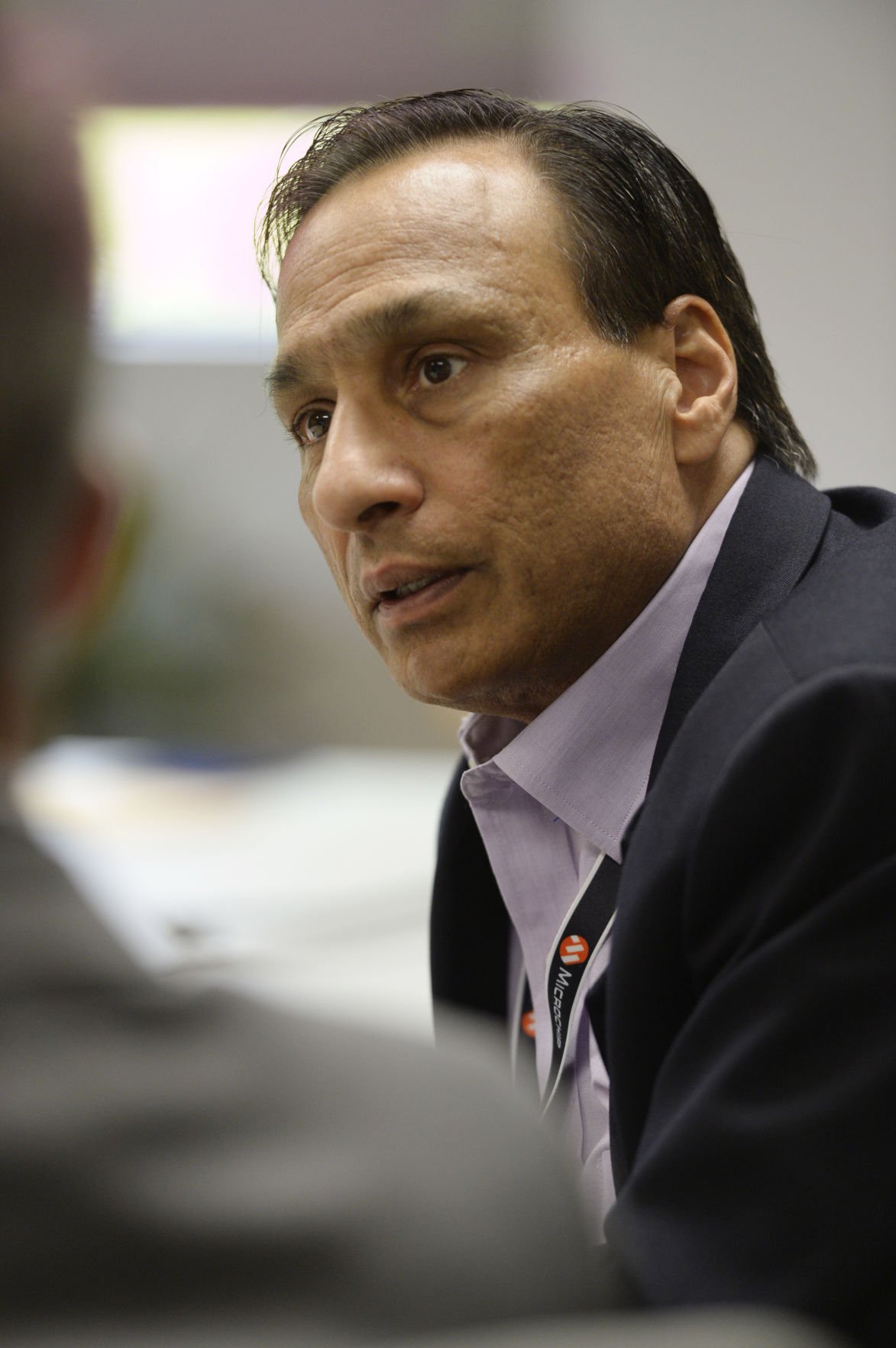 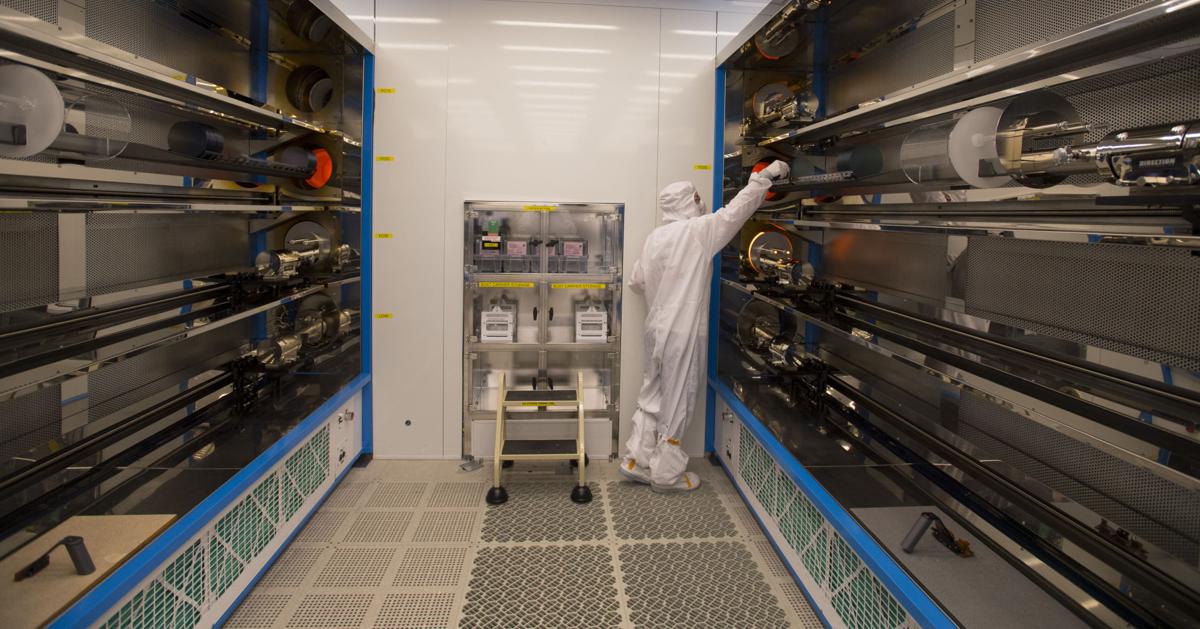 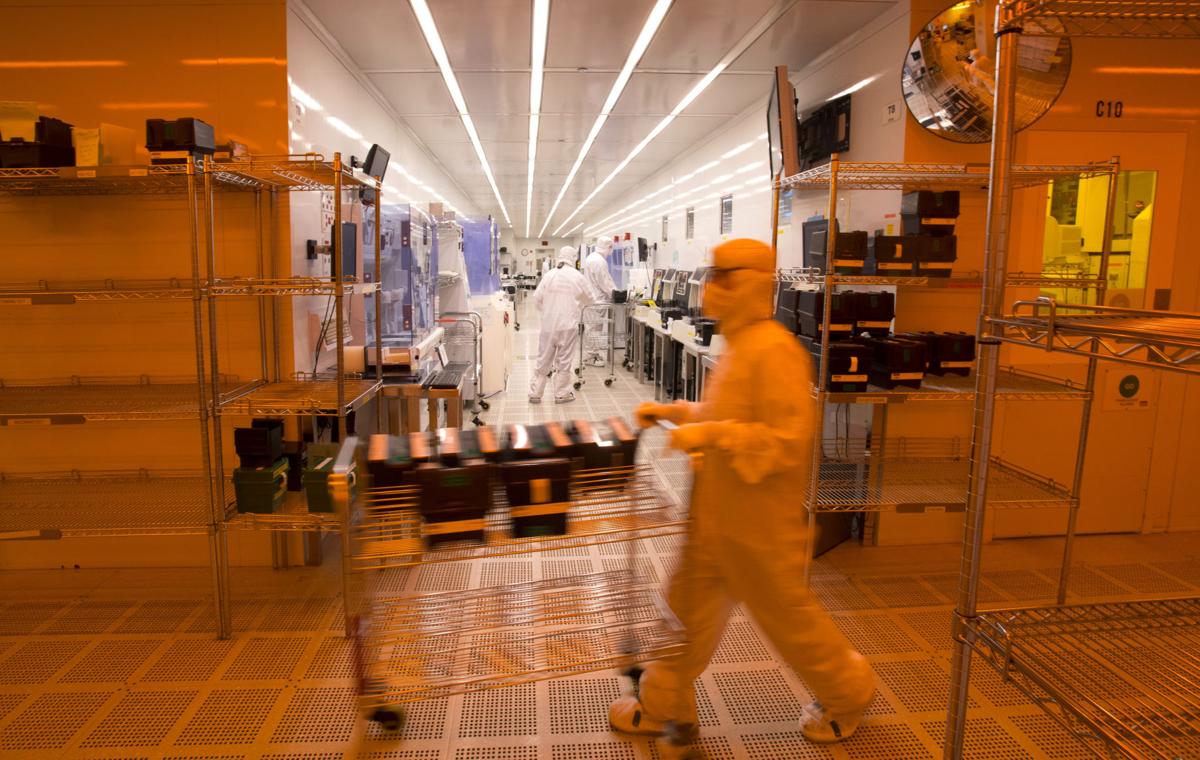 A worker in the clean room at Microchip rolls product through the fab Friday, July 15, 2016. Photo by Mark Reis, The Gazette 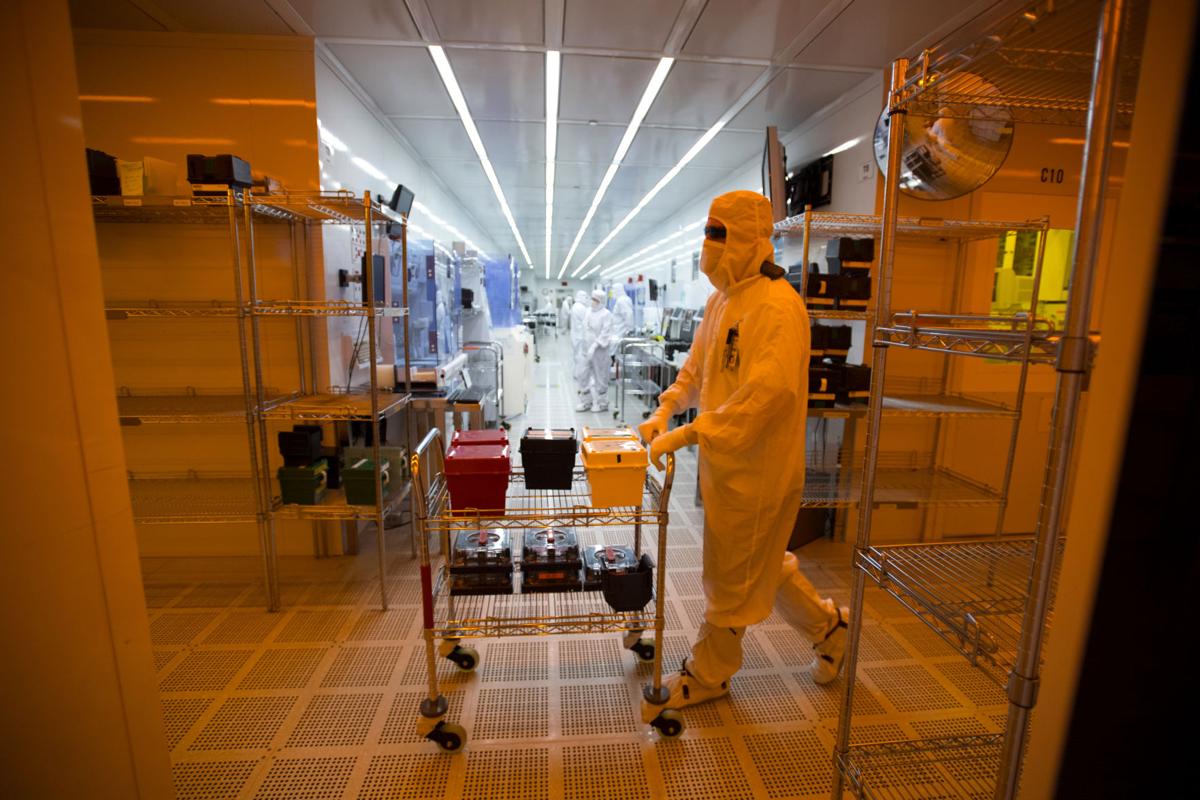 A worker in the clean room at Microchip rolls product through the fab Friday, July 15, 2016. Photo by Mark Reis, The Gazette

Microchip Technology Inc. is investing "several million dollars" in moving equipment from a plant it is closing in California to the Colorado Springs plant it acquired in buying Atmel Corp. in April.

In doing so, the plant is getting a fresh start.

The Chandler, Ariz.-based semiconductor manufacturer began moving $1.4 million in equipment in mid-June to the former Atmel plant at 1150 E. Cheyenne Mountain Blvd. There, 8-inch silicon wafers made in Asia will be prepared to be made into computer chips at Microchip's other plants in Tempe, Ariz., and Gresham, Ore. The company is renovating part of the 400,000-square-foot Springs plant to add an epitaxial layer that is deposited on the wafer that is later made into hundreds or thousands of specialized semiconductors through hundreds of manufacturing steps.

"I don't see us adding many employees here in the next year or two. We plan to fill both plants during that time. As we get closer to full capacity and need additional employees, there will be an evaluation of whether to put products here or in Oregon," Sanghi said. " ... Some probably will be designed for (the Oregon plant) and there will be some swapping of products between Colorado and Oregon, but net-net, Colorado will still get more" than the Oregon plant.

Bob Cope, economic development manager for the city of Colorado Springs, said during a meeting with Sanghi that the city plans to restructure tax breaks approved four years ago for Atmel to make them "more meaningful" to Microchip. The breaks were to cut Atmel's tax bill by $339,070 on $25 million in equipment and other capital spending the company planned between 2011 and 2015. The agreement required Atmel to both spend the $25 million and "retain an estimated 1,300 existing local jobs" at the plant, which now employs about 900.

The agreement is outdated for a number of reasons, including rebates for a business personal property tax the city is phasing out and incentives for a product line Atmel sold last year to Unipixel Inc. The agreement is expected to be either amended or replaced by year's end, Cope said.

Sanghi was in the Springs to formally mark the transition from Atmel to Microchip with a new sign, an event sought by the plant's employees and management as a public acknowledgment that they had become a lasting part of the new company. He has been to the plant three times since the deal was completed - more visits than Atmel's CEO had made in nine years - and also met with community and business leaders and had lunch with 15 employees who were randomly selected from the plant.

Microchip is moving work to the Springs plant because it is among the lowest-cost producers of semiconductors in the world, competitive with huge plants in Asia that produce chips on a contract basis for many companies and benefit from labor costs that are a fraction of costs in the U.S., Sanghi said. The Springs plant makes more than 200 product types for Microchip that are sold to more than 65,000 customers worldwide, a much broader product line than is manufactured at either the Tempe or Gresham plants. The local plant also includes engineering and other operations.

"This plant produces a wide variety of technologies," Sanghi said. "In certain applications, very high performance is required and some require very low power, particularly in portable applications. In a smoke detector, you want (the chip) to use very low power, while in a router, you want it to transmit a large amount of data. A fab (semiconductor fabrication plant) needs a variety of technologies to meet the needs of many customers. ... We produce thousands of products, so a fab that runs all those technologies is very valuable to us."

The epitaxial wafer expansion is a good example. Microchip would pay nearly twice as much to buy such wafers from an outside supplier as it will cost to make them locally and also will receive the wafers in less than a week compared with six weeks from the supplier, Sanghi said.

The expansion comes after more than a year of questions about whether the plant would survive amid a sale process that began in May 2015, when Atmel's CEO announced plans to retire, prompting the board to put the company up for bid.

"There has been a lot of uncertainty for a long time at this site. But the people here have put themselves into competition with Asian fabs, and you have to be competitive in that framework because they (customers) have a choice of where to buy," Sanghi said. "We will take a lot of Microchip processes and design them for technology we have in Colorado and grow them here. With continued hard work and teamwork of everyone here, Microchip will continue to flourish in Colorado and continue to grow together to be successful."

That the Springs plant survived the past two recessions - despite technology that is now two generations behind the industry standard - testifies to the steps taken by the plant's management and employees to make it efficient enough to compete with Asian contractors, Sanghi said. "This plant has many years of life left in it. I expect that we will upgrade the 6-inch wafer equipment we have now, add automation, and buy new tools."

Microchip doesn't plan on building a plant in the Springs that would produce chips from either 8- or 12-inch wafers anytime soon, because a plant using 8-inch wafers would operate at just 30 percent capacity based on the products now produced here and thus would not be cost-effective, Sanghi said.

Meanwhile, production in the Springs probably will not reach 90 percent or higher for another year or two since the new products Microchip is moving here - mostly microcontrollers and memory chips - will take up to three years to hit high-volume manufacturing, he said.

The acquisition of Atmel made Microchip the world's third-largest producer of microcontrollers - tiny computers on a chip used in industrial, consumer, communications, computing, automotive and other industries that provide about two-thirds of its revenue.

The company will continue to seek acquisitions over the long term, Sanghi said, but in the short term must complete the integration of Atmel into Microchip so the company is operating more efficiently under one set of systems and selling one product line. As an example, he noted that Atmel did not sell its chips online, but they will be, beginning Nov. 1, on Microchip's electronic commerce site - www.microchipdirect.com.