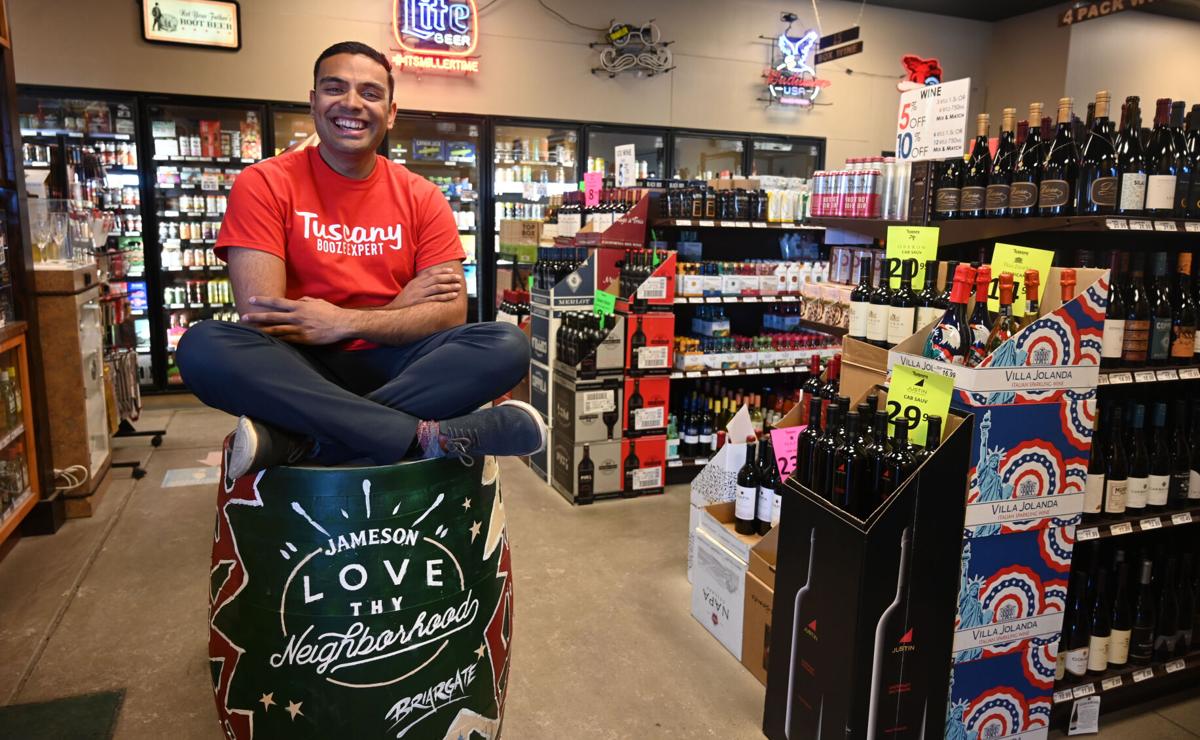 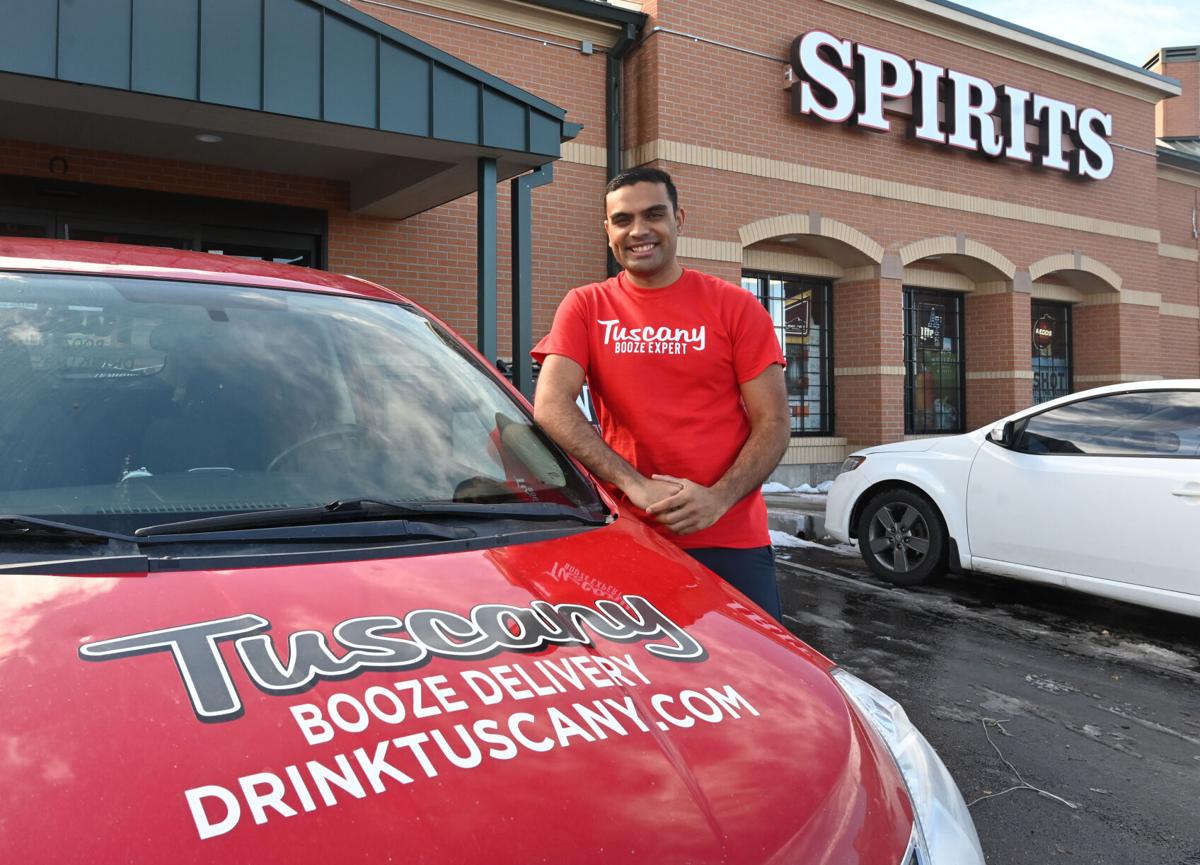 Twenty-five-year old Mehal Jivan was a Mayor's Young Leaders Awards finalist and is owner of Tuscany Wine, Spirits + Craft. Jivan is one of a growing number of liquor stores to deliver. (Photo by Jerilee Bennett, The Gazette) 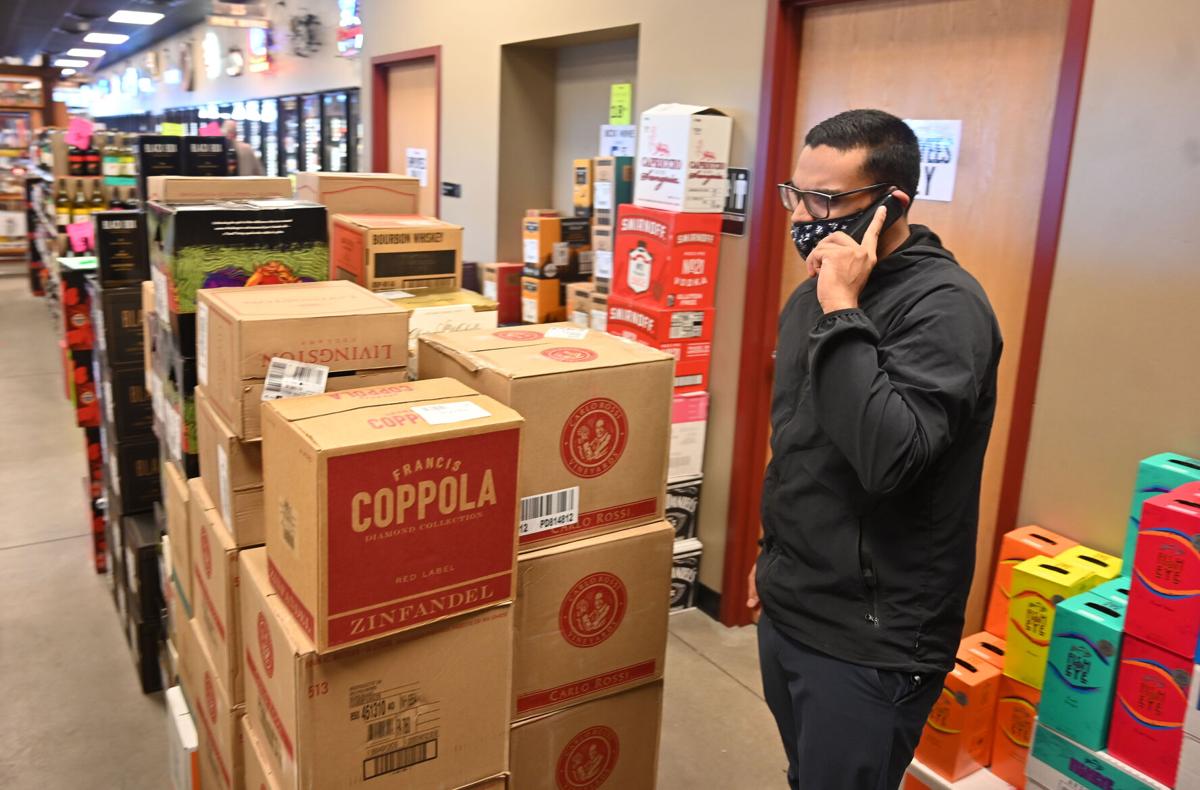 Twenty-five-year old Mehal Jivan was a Mayor's Young Leaders Awards finalist and is owner of Tuscany Wine, Spirits + Craft. He takes a business call in the store on Wednesday, Oct. 28, 2020. (Photo by Jerilee Bennett, The Gazette)

Twenty-five-year old Mehal Jivan was a Mayor's Young Leaders Awards finalist and is owner of Tuscany Wine, Spirits + Craft. Jivan is one of a growing number of liquor stores to deliver. (Photo by Jerilee Bennett, The Gazette)

Twenty-five-year old Mehal Jivan was a Mayor's Young Leaders Awards finalist and is owner of Tuscany Wine, Spirits + Craft. He takes a business call in the store on Wednesday, Oct. 28, 2020. (Photo by Jerilee Bennett, The Gazette)

This is one in an occasional series profiling young professionals in the Pikes Peak area.

His great-grandfather traveled on a boat from his native India to South Africa to be a sugar cane farmer; he ended up buying a grocery store that was one of the customers for the sugar cane. Jivan's grandfather then grew that store into one of the largest wholesale supermarkets in Johannesburg.

Jivan's father was sent to the U.S. as violence surrounded the waning days of apartheid in South Africa. Jivan's parents would go on to build their own business in Colorado Springs, a liquor store.

"I grew up sort of in the back of their store," says Jivan, a first-generation American. On holidays and weekends, he swept the floors and stocked sodas.

Now Jivan — who started his first business, a one-man tech-support company, when he was a teen and who just turned 25 — runs his own liquor store, Tuscany Wine, Spirits + Craft, on the north side of Colorado Springs. That hadn't been in his master plan — he had intended to go the corporate route and already had a job waiting for him once he graduated from college — but when the original owners offered to sell him the store after just a few months of being in business, he saw it as an opportunity he couldn't turn down.

A "passion for excellence and supporting Colorado products" is what drives the business, the Tuscany website states.

"I didn't want to bring another generic liquor store to Colorado Springs," Jivan says. "I wanted to focus on what Colorado does best, and that's producing great local products. So any segment of the store, you will see we have definitely spent the most amount of time and effort, and shelf space for that matter, on Colorado products."

Jivan has long had an interest in computers and technology. "I broke a lot of things to understand how they worked," he says. He was 15 when he started his tech support business.

"I essentially looked at Best Buy's Geek Squad, sort of the pricing and the services that they did," he says. He cut those prices in half for his services, found customers on Craigslist and had his grandfather drive him around to serve those customers. "It could be setting up routers, moving onto the cloud, backups for their hard drives, just basic technology needs," he says.

One of the 'doers': Owner of IT company plugs himself into Colorado Springs community

He kept that business going during his years at the University of Colorado at Colorado Springs, where he graduated in 2017 with a double major in finance and management with a minor in economics. He also has more typical experience on his resume.

"The summer before I started college, just out of high school, I walked into a Starbucks and asked if they were hiring," he recalls. They were and he worked as a barista part time, eager to pick up lessons about how the business operated.

While at UCCS, he spent a semester abroad at John Cabot University in Rome. One reason he chose that destination: Jivan has a longtime interest in architecture, "and there's no place like Rome when it comes to that."

While he had traveled overseas before, to India and South Africa, living in another land proved to be a life-altering experience — one he tried to help others experience upon returning home by volunteering with, and then helping lead, UCCS' study abroad program.

In Rome, there were students from across the globe, from local commuter students to students from the U.S., Romania, Spain, Mexico — "you name it," Jivan says. "That diversity and hearing everyone's story was just incredible. It was the best decision I ever made to leave my comfort zone here in the Springs and throw myself into a country where I didn't know the language, where I didn't know anyone."

In addition to his studies, he ended up learning about himself.

"I grew up thinking I was an introvert," he says. But in Rome, he had two choices: hide inside his dorm room or get out, make friends and explore the city. "Once I got there, I realized i had this hidden side and this hidden personality that just really wasn't exposed here. Going there really brought that out. It's really due to the people I met there and engaging in those really unique intellectual conversations, just about life, not academia."

Venkat Reddy, UCCS chancellor, knows Jivan through his family and through Jivan's time at the school when Reddy was dean of the College of Business.

In an email, he called Jivan  "a fine young man with impeccable character" who had been an excellent student.

"Mehal always had an entrepreneurial spirit about him," Reddy noted. "He is very excited about what he is doing and was actually talking to me about how he wants to try innovative ideas in expanding his business and will plan on carrying high-end brands to increase the prestige of the place."

Age not an issue

It was six months before graduation that the opportunity to take over the Tuscany store came about; the original owners were distant relatives yearning to go back to South Africa. When Jivan took over, he was barely of legal drinking age.

"I have learned so much about liquor and wine and beer," he says. "I look at it as more of an art form than anything else. Look at the flavor profile, the name, the packaging. There's so much creativity in this whole industry that just goes unnoticed."

He says he hasn't found his age to be an issue; he has one employee who is younger than him while his oldest employee just turned 68. More of a challenge is the youthful age of his business, as he sees older, more established stores as having a competitive advantage. He thus has been aggressive in finding and forging relationships with vendors, he says, "so it can be a 10-year business at the five-year mark."

He finds social media to be a valuable tool in reaching out to customers and vendors.

"I do a lot of business through social media. I will see a brewery going to a grocery store and taking a picture of a lot of fruit they're going to use. I can communicate with them right then and there. 'When is this going to be ready to can? I'd like to place an order.'"

He also has to deal with the potentially not-so-positive part of social media: online reviews. "You get a lot of great feedback from customers, but you also get negative reviews posted online when it is often a very easy fix in the store."

Whatever field you're in, "he says, "customers are all the same. They're looking for three things in my opinion, and that's selection, service and price. They want to be able to go to a place where they feel comfortable and they feel like they're getting a good deal,  and maybe engage in a little conversation."

Tuscany Wine, Spirits + Crafts stayed open even during the height of the pandemic, as liquor stores were declared an essential business under the governor's Stay at Home order. Jivan late last year had already started an "in-store pickup side of the business" where people could order online and then dart inside to grab the order; that system included a delivery feature, which he turned on when the pandemic took hold and proved to be quite popular.

There was panic buying early on, he says, and consumers' habits have changed, such as a shift to fewer but larger orders: a bigger bottle of wine or a 30-pack instead of a six-pack of beer.

"I think what COVID has taught me is you need to prepare for anything," he says, "and you need to use technology to your advantage."

COVID also derailed wedding plans. While he is already married, "we were supposed to have, I'll call it a big, fat Indian wedding in Johannesburg at the end of the year. However, due to COVID, that has been postponed."

More in Collection: Young professionals around the Pikes Peak region (1 of 8)

Mehal Jivan was a finalist in the annual Mayor’s Young Leader Awards presented recently in Colorado Springs. The awards celebrate the outstanding achievements of area professionals age 40 and under; the 2020 winners were selected from 30 finalists across six categories. Here are the winners: