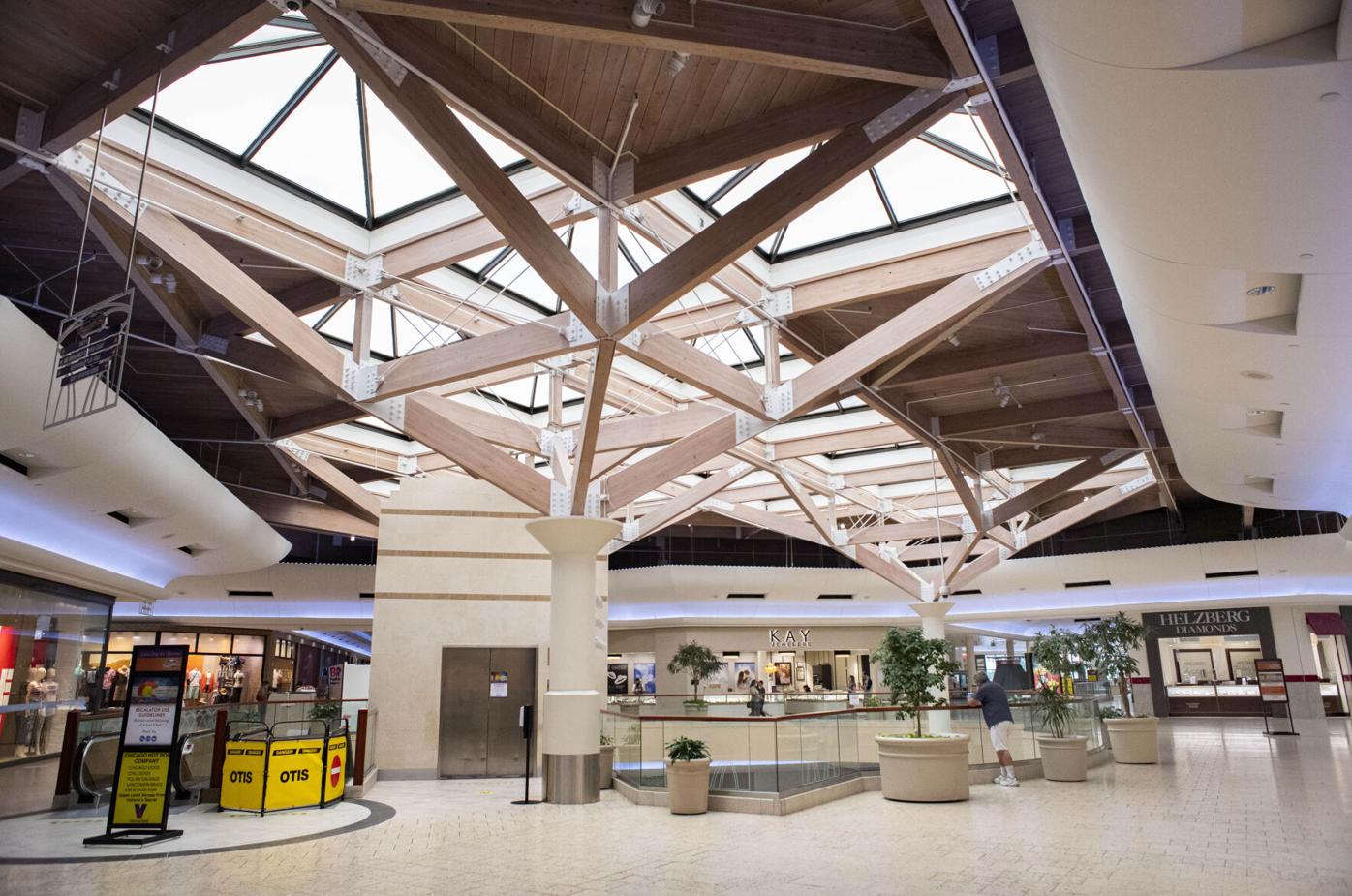 Shoppers hang out at the Chapel Hills mall last week. The mall in northern Colorado Springs was built in 1982. 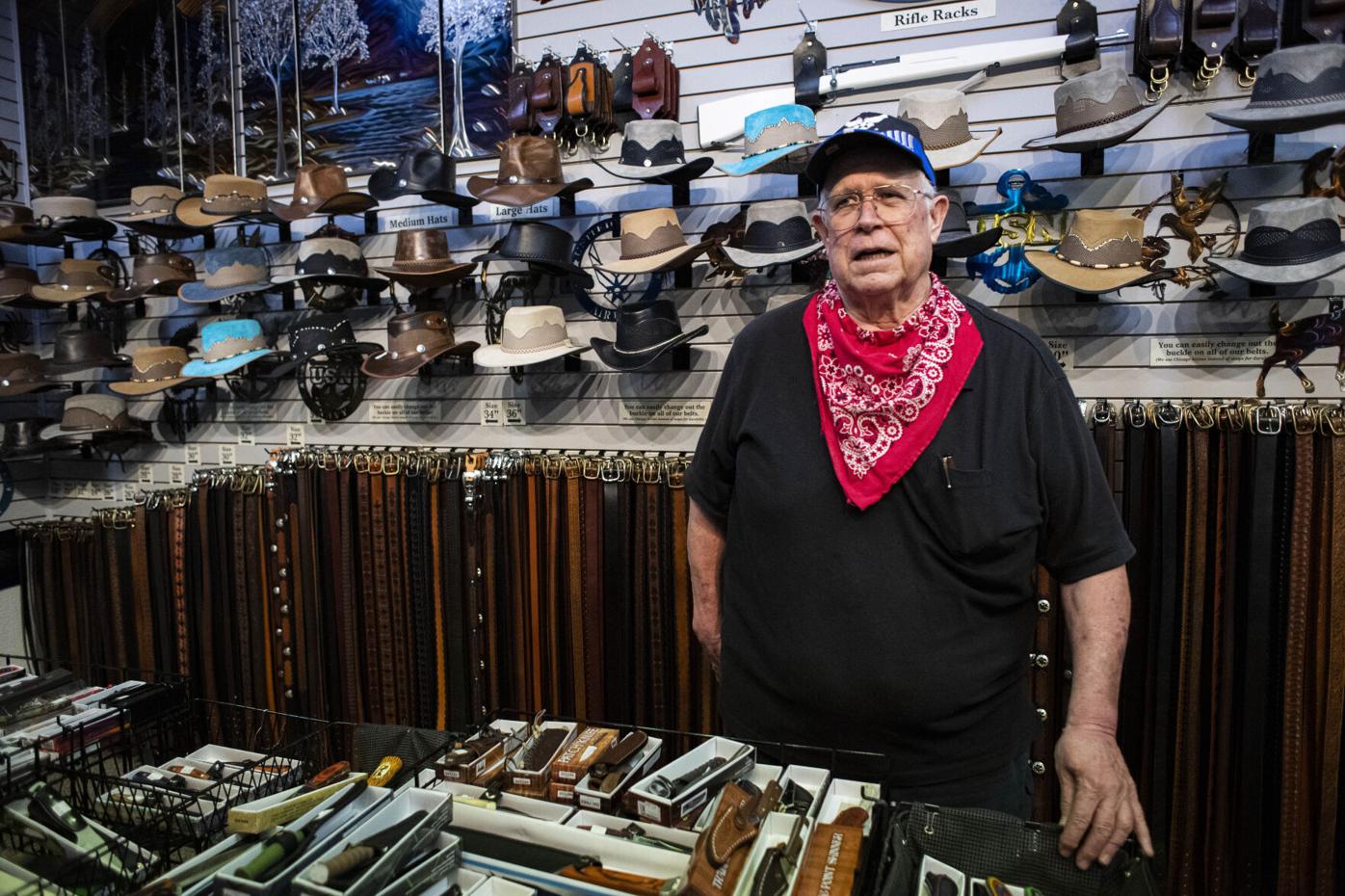 Joe White, the manager of Hidemasters in the Chapel Hills mall, says he’s in favor of the proposed 300-unit apartment complex on the site of the former Sears store at the mall on the north end of Colorado Springs. 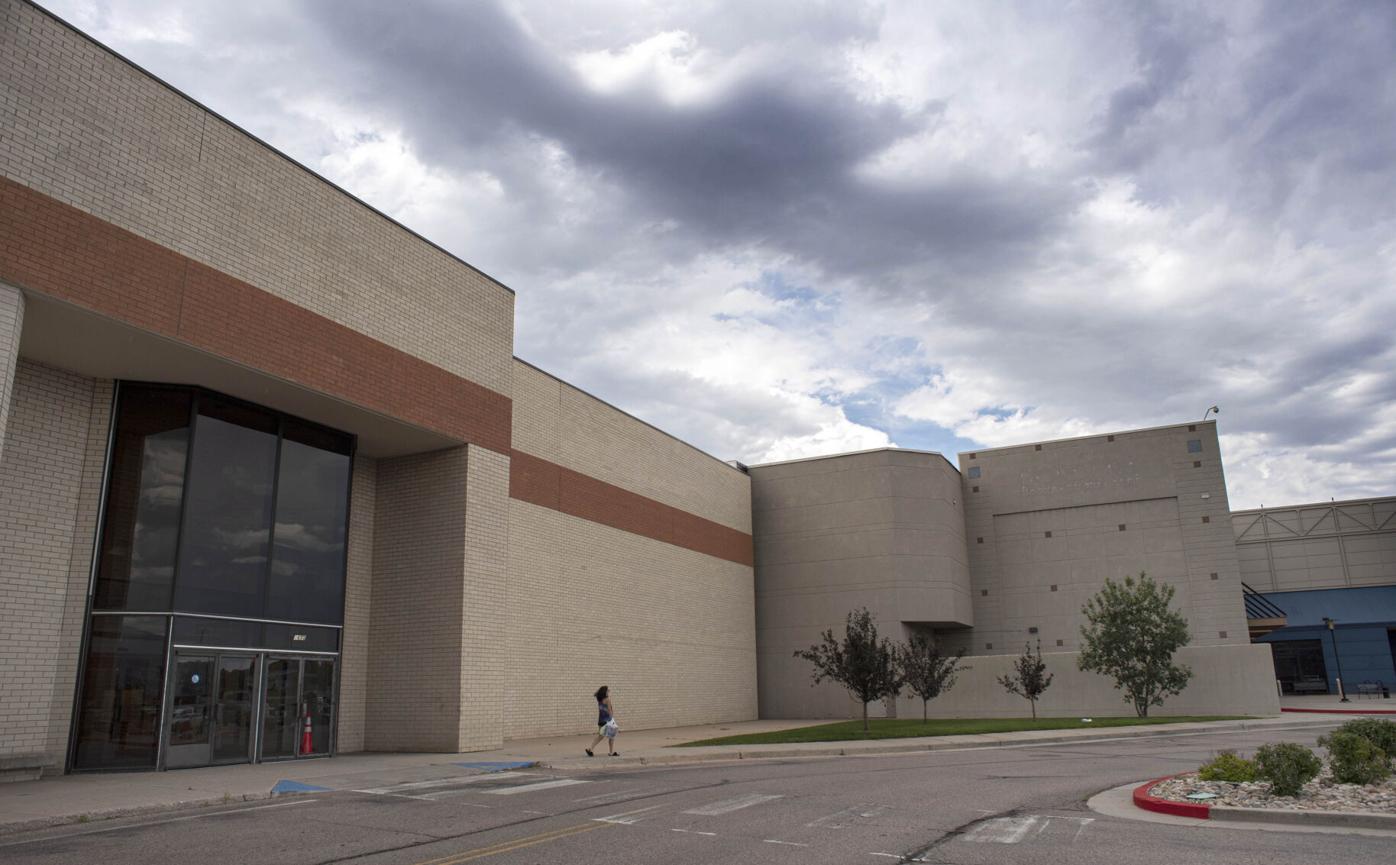 A woman walks toward the main entrance to Chapel Hills mall past the vacant Sears store last week. The anchor store at the mall closed in March 2019. The store is slated to be torn down and a 300-unit apartment complex built in the space.

Shoppers hang out at the Chapel Hills mall last week. The mall in northern Colorado Springs was built in 1982.

Joe White, the manager of Hidemasters in the Chapel Hills mall, says he’s in favor of the proposed 300-unit apartment complex on the site of the former Sears store at the mall on the north end of Colorado Springs.

A woman walks toward the main entrance to Chapel Hills mall past the vacant Sears store last week. The anchor store at the mall closed in March 2019. The store is slated to be torn down and a 300-unit apartment complex built in the space.

Colorado Springs’ two enclosed shopping malls aren’t getting younger. The question is, how much older will they get?

An Arizona real estate company this month proposed razing the former Sears store at the Chapel Hills mall and developing a 300-unit apartment complex in its place.

The project, which still has hurdles to clear, underscores changes to the local retail landscape, long-term challenges faced by older malls and their need to reinvent themselves, say some local commercial real estate industry members.

Chapel Hills, which opened in 1982 at Academy and Briargate boulevards, and The Citadel, which debuted a decade earlier northwest of Academy and Platte Avenue, are prime examples of aging malls whose long-term viability has been questioned by retail experts.

“The older malls are kind of going away in the sense that nobody’s really building those per se anymore,” said Mark Useman, executive managing director at brokerage Colorado Springs Commercial.

“We’ve gone forward toward lifestyle centers like the Promenade Shops at Briargate and those kinds of things where it’s more convenient to park and walk to one store if you wanted to and not have to tramp through a mall.”

The Promenade Shops, along with the First & Main Town Center, Polaris Pointe, Highlands at Briargate, InterQuest Marketplace and InterQuest Commons are among several newer, open-air retail centers built in fast-growing, rooftop-laden parts of town that pose stiff competition to Chapel Hills and The Citadel.

Online retailers such as Amazon, meanwhile, continue to take a toll on brick-and-mortar ones. Chapel Hills and The Citadel, like other shopping centers, must cope with vacancies created when small retailers close or large, financially troubled national chains downsize or even go out of business. J.C. Penney, Gordmans and Borders Books & Music are gone from the Chapel Hills mall, while Macy’s left The Citadel just over a decade ago.

Sears shuttered its Chapel Hills mall store in March 2019, part of a wave of closings around the country by the retailer. Sears also closed its store last year at the Broadmoor Towne Center on the Springs’ south side; that building is being redeveloped into space for multiple users, including a second location for the Magnum Shooting Center.

At Chapel Hills, Evergreen Devco, based in Phoenix, has contracted to buy the former two-story Sears building and its 13-acre property, which had anchored the mall’s west side since the shopping center opened. After it demolishes the store, Evergreen plans to develop a market-rate apartment community with a clubhouse, fitness center and pool, among other amenities.

The project is exactly the kind of new use that malls such as Chapel Hills and The Citadel need to boost their chances at survival, said several Colorado Springs commercial brokers.

“The latest evolution for retail has been more mixed use,” said John Winsor of The Retail Group, part of Olive Real Estate.

“That’s not necessarily new. But the component that that mall (Chapel Hills) didn’t have was residential. ... That just converts one of the big boxes into a better use, bringing some of that closer and creating additional walk-in traffic for some of the stores there.”

Chapel Hills also has a 13-screen movie theater complex and several food court restaurants as well as eateries that ring the property.

“When those properties (mall anchors) can’t be filled with another use, you need to do something with it,” Egan said. “If it just sits there, it just sort of rots in the area and then it pulls the area down. So it’s good that we’re maybe doing this at some level.”

Namdar Realty Group and Mason Asset Management, the New York-based owners of Chapel Hills and The Citadel, are ready to embrace the apartment project, the companies’ local representatives say. While Namdar and Mason own the mostly interior mall spaces, they don’t own the centers’ anchor spaces, such as Sears, Burlington, Dillard’s and Macy’s at Chapel Hills or the J.C. Penney and Dillard’s at The Citadel.

Chapel Hills General Manager Ed Beane said he expects the addition of Evergreen’s apartment project to be “phenomenal” for the mall and will help attract new retailers and restaurants. He especially wants to market the mall toward local businesses that would want to be close to several hundred renters.

“With this apartment complex next door, these people can come here and shop, get a good meal and then go to a movie,” Beane said. “It’s all within walking distance.

“I look at this as a new beginning for our shopping center,” Beane added.

“Not only with the apartment complex, but now here’s an opportunity for me to go out there and reach out and get more of the local businesses from our community to come in.”

Some of the mall’s tenants say they welcome the apartment project’s addition.

Joe White, the manager of Hidemasters, which sells leather belts, wallets, accessories and other items and expanded to the Chapel Hills mall last year from its Old Colorado City location, said the apartments would create a steady clientele for stores like his.

“You’re going to have 350 built-in customers with access year round to the mall as opposed to it (the Sears building) sitting empty,” said White, whose wife, Pat, owns the business.

“That’s kind of a no-brainer there.”

Mall owners Namdar and Mason also remain open to other big-box conversions, said Sherry Drew, vice president of specialty leasing for Namdar. Already at The Citadel, a charter school took over part of the Macy’s store last year that had been vacant for a decade.

In addition to competition from newer centers and changing consumer habits, the malls — like other shopping venues — are dealing with fallout from the COVID-19 pandemic. Under state restrictions designed to slow the spread of the coronavirus, Chapel Hills and The Citadel were closed for roughly three months and reopened June 20.

They’re operating with enhanced safeguards; face masks are encouraged, seating at food courts and common areas has been removed, and loitering and group gatherings are banned, among other measures. The malls have reduced their hours to 11 a.m. to 7 p.m. Mondays through Saturdays and 11 a.m. to 5 p.m. Sundays.

Before the COVID-19 pandemic, Beane said Chapel Hills’ occupancy rate was 91% to 92%, while Drew said The Citadel was at about 85%. Since the pandemic took hold in March, those numbers have declined, though Beane and Drew said they didn’t have up-to-date figures.

Not surprisingly, the malls have seen some retailers close their doors since the pandemic hit. GNC, the vitamin and nutrition chain that filed for Chapter 11 bankruptcy protection in June, closed stores at both malls, as did the Rocky Mountain Chocolate Factory, Drew said.

Tuesday Morning to close one of three Colorado Springs stores

Namdar and Mason, however, have advantages as they work with tenants to fill retail spaces, she said.

The companies paid what local retail experts have said were bargain-basement prices to purchase the malls from financially troubled owners — $20 million for The Citadel in 2015 and $33.5 million for Chapel Hills in 2018. Those figures were far less than previous purchase prices.

Drew said those discounted prices now allow Namdar and Mason to offer more affordable lease rates than some other shopping centers, while they’re also open to signing tenants to flexible terms. With that in mind, Drew said the malls are targeting local and regional retailers as tenants, not just national outlets.

“We’re doing our best to have a lot of the local flavor that potentially wouldn’t have looked at either mall,” Drew said.

Drew and Beane, the Chapel Hills general manager, believe both malls can survive despite issues confronted by the retail industry.

Shoppers still like to walk inside a store and avoid having packages stolen from their porches, Beane said. Drew, meanwhile, says community members still like the social interactions they find at malls, though the centers still must provide exceptional customer service and offer shopping and entertainment experiences to attract customers.

Their optimism aside, however, the malls still operate largely under what critics say is an outdated model of anchor stores designed to attract shoppers who will patronize apparel and shoe stores, gift shops, food court restaurants and other mall retailers.

The community should expect more conversions of large retail spaces similar to the Sears at Chapel Hills, whether they take place at malls or open-air shopping centers, said Egan, of NAI Highland. He’s working with a company that’s looking at large retail properties in the Springs and elsewhere as possible candidates for new uses.

“It’s a trend,” Egan said. “If you think about it, there’s the Amazon effect. Big boxes are becoming leaner and meaner in order to compete.”

Gyms and movie theaters had been used to fill some big-box spaces in recent years, whether at malls or other shopping centers. A VASA Fitness Center has opened in a portion of a former Kmart at Fillmore Street and Nevada Avenue, while a movie theater complex and entertainment center are planned for the rest of the store.

But fears over the spread of the highly infectious coronavirus now make gyms and theaters a questionable use, at least for now, said Useman of Colorado Springs Commercial.

“The fitness centers ... they were all good mixes for those kind of boxes,” Useman said.

“They’d take part of it. Now with the COVID, they can’t do business. So that’s not going to happen for a while. Hopefully it’s temporary.”

Chapel Hills and The Citadel are well located near busy intersections and accessible to traffic from several directions, Winsor said. As a result, large mall anchors are ripe for transformation into apartments, senior housing or industrial, storage or distribution space, he said.

“Or, torn down and redone entirely, because that big box, there’s a better fit for the demographic,” Winsor said.

“Is it residential? Certainly that’s a potential. It’s going to be a variety of things.

“Sometimes, the big-box uses that are there probably shouldn’t have been there in the first place.”

Colorado restaurants continue to struggle to stay in business amidst the coronavirus pandemic, despite ongoing policy efforts to help keep them afloat.