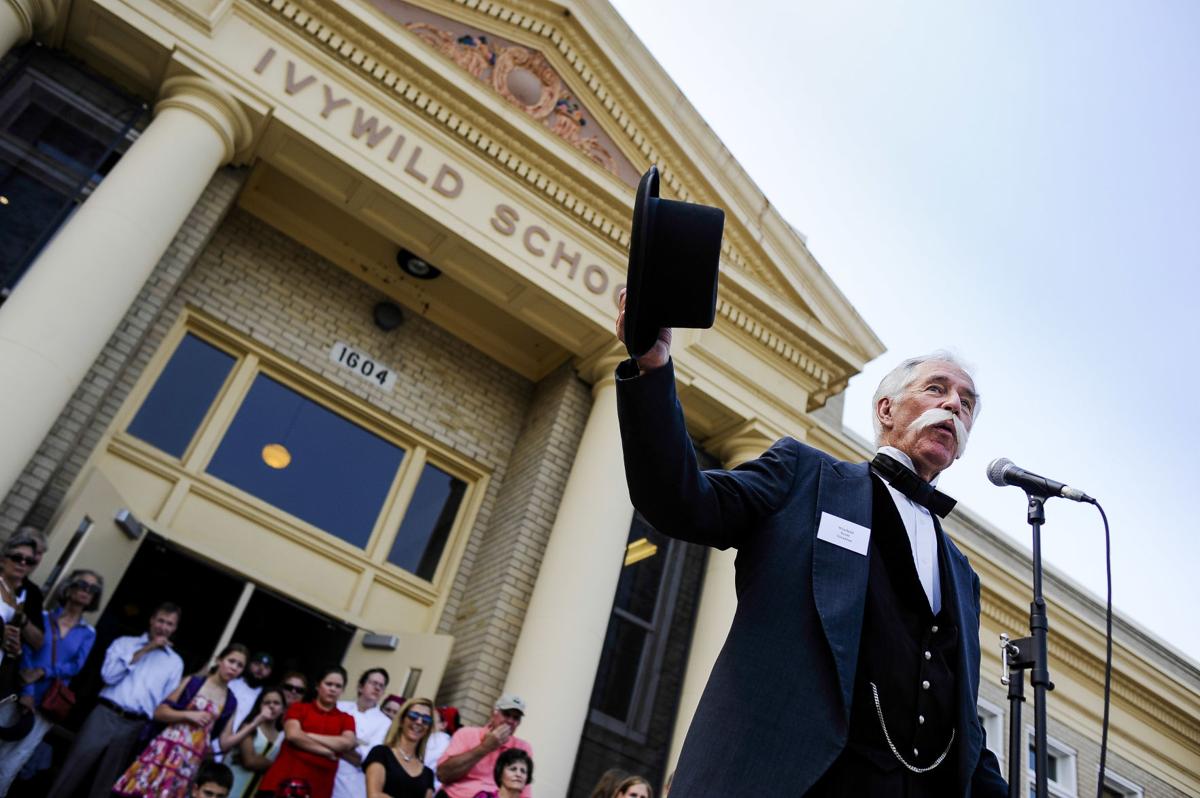 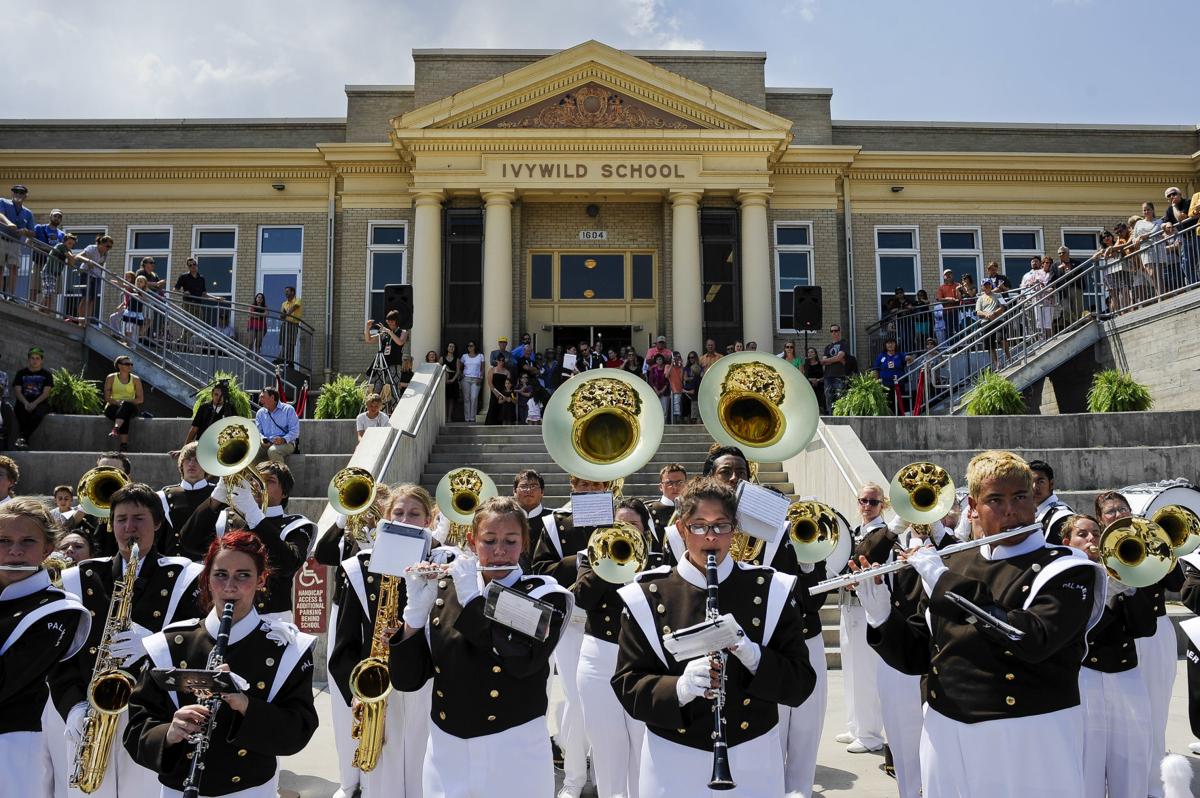 The Palmer High School marching band performs as they kick off the festivities at the grand opening of the Ivywild School, the new home of the Bristol Brewing Company, Friday, August 16, 2013. Michael Ciaglo, The Gazette 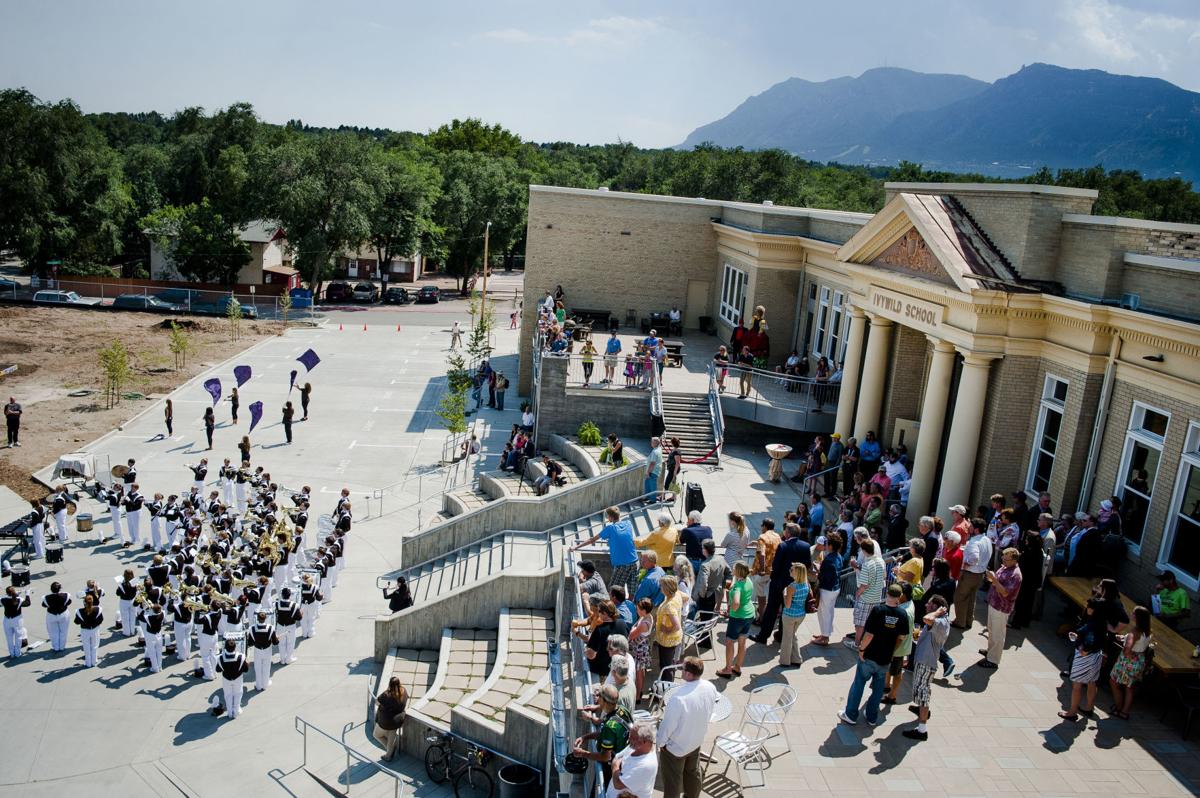 Crowds gather to listen to the Palmer High School marching band kick off the festivities as the Ivywild School, the new home of the Bristol Brewing Company, celebrates their grand opening Friday, August 16, 2013. Michael Ciaglo, The Gazette

The Palmer High School marching band performs as they kick off the festivities at the grand opening of the Ivywild School, the new home of the Bristol Brewing Company, Friday, August 16, 2013. Michael Ciaglo, The Gazette

Crowds gather to listen to the Palmer High School marching band kick off the festivities as the Ivywild School, the new home of the Bristol Brewing Company, celebrates their grand opening Friday, August 16, 2013. Michael Ciaglo, The Gazette

Beer, sausage and baked goods have replaced books, pencils and backpacks at the former Ivywild Elementary School in Colorado Springs.

The remodeling of the 20,000-square-foot building from a vacant school into a mixed-used, commercial and community center, completed about a month ago, was celebrated Friday with grand opening ceremonies attended by more than 200 people.

A beer christening and the cutting of a 24-foot-long ribbon of sausage links were among the highlights of the event.

The school transformation was the idea of partners Mike Bristol of Bristol Brewing Co., Blue Star restaurant owner Joe Coleman and architect Jim Fennell - a vision they launched three years ago. They accomplished the project for $4 million to buy and remodel the school, and Bristol spent another $1 million for a brewhouse imported from Germany.

"This is a celebration that says, hey, if people work together, this is what can happen," Bristol said. "We can do this again. Not me personally, but as a community. We can do other things like this."

The building at 1604 S. Cascade Ave. was one of seven elementary schools closed by Colorado Springs District 11 in 2009 because of declining enrollment. The school opened in 1916, and expanded in the 1950s.

A partnership formed by Bristol, Coleman and Fennell eyed the school in 2010. Bristol needed more space for his brewery, which was located on nearby Tejon Street. Coleman was interested in a bakery, and Fennell wanted to pursue a concept for a building that would have multiple and sustaining uses.

At the group's request, the city declared the school property an urban renewal site in 2011, which helped with the project's financing. The partnership bought the school from District 11 the next year and launched a remodeling, which included talks with area residents on what they wanted to see in the building.

The school's north end now houses Bristol's brewing operation and a pub; bottling and shipping take place in a separate building to the west.

Along the hallway connecting the two ends of the rectangular building are the Old School Bakery; the Meat Locker Delicatessen and a separate area where meats are made in-house; the Principal's Office coffee shop and cocktail bar; the Hunt or Gather food marketplace; the Teacher's Lounge dining area; a gift shop selling T-shirts and speciality beer; and Fennell's architectural office.

A future phase would include a greenhouse where recycled heat, water and spent grain from the brewing operation would be used to help grow food.

Bristol said his pub and brewing operation are doing well at the new location, although there was a brief period when he ran short of beer as brewing was shut down in late May at his old locationand restarted at the school.

But his pub area is doing twice the business than at the previous location - volumes that Bristol said he didn't expect for a couple of years - and craft beer sales to liquor stores, restaurants, bars and others around the state also continue to grow, Bristol said.

Parking has been a challenge, but it was a problem that used to plague the building when it was aschool, Bristol said. "We're not a strip mall with a huge lot," he said, adding the partners are working to increase parking.

Overall, Bristol said he hopes visitors recognize that places such as Ivywild are as much about community as they are about commerce.

"They're about people gathering, they're about seeing your neighbors, seeing the people in the community," he said. "When people get together and communicate, good things happen."