Packages are picked up at the Amazon delivery station in operation near Colorado Springs Airport at the Peak Innovation Park last week. 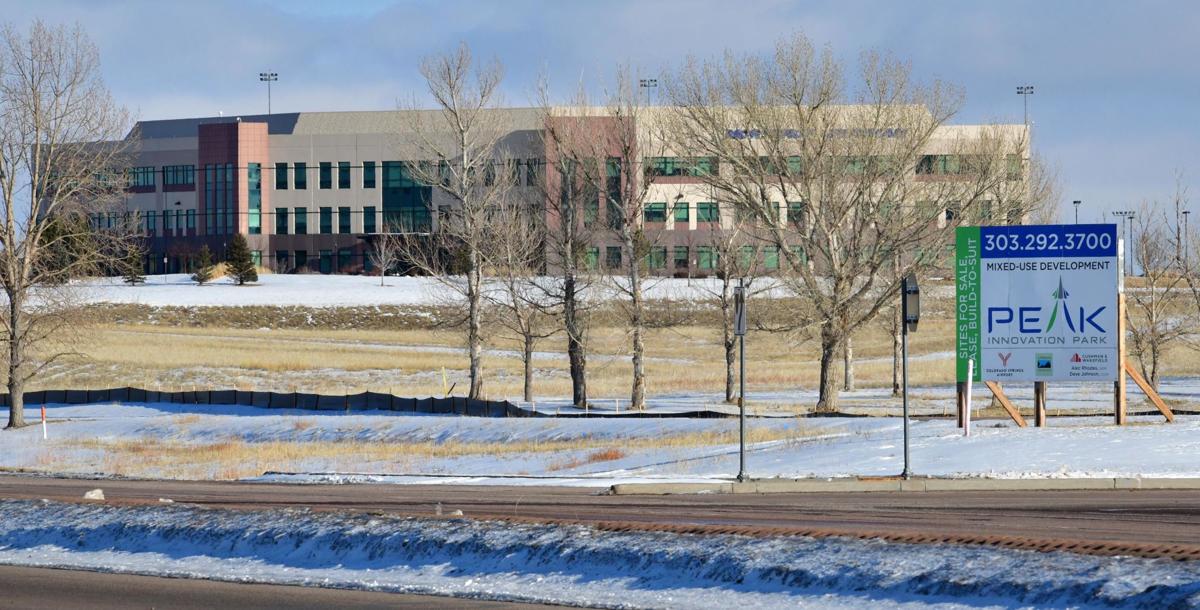 Northrup Grumman is one of the businesses already built and in operation at Peak Innovation Park, but more are coming to the area around it. (Photo by Jerilee Bennett, The Gazette)

Packages are picked up at the Amazon delivery station in operation near Colorado Springs Airport at the Peak Innovation Park last week.

Northrup Grumman is one of the businesses already built and in operation at Peak Innovation Park, but more are coming to the area around it. (Photo by Jerilee Bennett, The Gazette)

For more than a decade, workers at Northrop Grumman and Aerospace Corp. have had the business park at the Colorado Springs Airport nearly all to themselves.

That’s about to change in a big way with construction of a massive distribution center for online retail giant Amazon and a pair of hotels starting this year. More development is expected to follow soon in the 960-acre Peak Innovation Park, including convenience stores, restaurants, other office buildings, an outdoor amphitheater, Ultimate Frisbee courses, running trails and other amenities for tenants.

The airport started construction on the business park, southeast of Milton E. Proby Parkway and Powers Boulevard, in 2006 and quickly landed federal research nonprofit Aerospace and defense contracting giant Northrop Grumman as well as a military rapid deployment terminal during the next two years. The airport hired Maryland-based Corporate Office Properties Trust in 2007 to develop the rest of the park, but the Great Recession stalled development and the trust eventually left the Springs without developing anything in the park.

Denver-based Urban Frontier took over developing the park in 2016 and began drafting development plans and seeking tenants. Amazon began talking with the airport and Urban Frontier two years ago about sites in the business park for two projects, a delivery station for drivers to pick up merchandise and make deliveries to customers in the Springs area and a much larger distribution center to serve a wider area.

Amazon last year built and opened the delivery station, the park’s first new tenant in 11 years. This month, the Seattle-based company bought 69 acres for a 4 million-square-foot distribution and sorting center that is expected open in early to mid-2021, employing more than 1,000 people to pick, pack and ship customer orders for books, electronics, toys and other smaller items to the Colorado Springs area, across the rest of the state and to surrounding states. Earth work has been underway on the site for weeks with construction expected to begin soon. It will be in the park’s southeastern corner along Powers Boulevard, as is the delivery station.

“This part of Colorado Springs has lacked many of the amenities such as hotels, shopping, recreation that you see in the northern parts of the city,” said Garrett Baum, Urban Frontier’s managing partner. “This park will be a catalyst to bring many of those uses to this part of the city. We are seeing a lot of activity separate from Amazon, including prospects related to U.S. Space Command (temporarily at Peterson Air Force Base).”

Activity in the park is starting to heat up. The airport has agreed to sell land in the park to Atlanta-based hotel developer Hotel Equities for a Courtyard by Marriott hotel that is expected to be under construction this summer and a second Marriott-branded hotel be built later on the same site. One of the park’s tenants, which was not identified, also is planning an expansion and Urban Frontier is negotiating with two other companies that want to build major offices in Peak Innovation Park, Baum said.

Growth in the area and the park’s strategic location near military space operations in the Colorado Springs area prompted Hotel Equities and its partners to begin planning for the two hotels two or three years ago, said Jim DiBiase, a partner in the Marriott project at the airport. The group plans to buy the property in May, begin construction by midsummer on the 121-room Courtyard hotel and open in summer 2021, he said. The second hotel, sharing a lobby and meeting space with the first project, would begin construction within a year.

“The occupancy, average room rate and revenue per available room in that area are all at historic highs in the past three years,” DiBiase said.

“There has been tremendous employment growth in the area, mostly from Department of Defense contractors, so we expect to see continued increases in demand and a need for new product. Even with a small decline in occupancy from a new hotel, we expect average room rate and revenue per available room to continue increasing.”

Urban Frontier recently came up with new plans for Peak Innovation Park, dropping plans for a golf course but adding an outdoor amphitheater, two Ultimate Frisbee courses and running trails as well as more than doubling the amount of office, industrial, hotel, retail and other space planned to between 8 million and 10 million square feet. The company hopes to attract tenants from the health care, financial services, technology and defense industries as tenants.

Baum, who was part of a team that brought Sun Microsystems to the Interlocken business park in Broomfield, wants a broad range of industries in the park to make the development less vulnerable to downturns in one or two sectors.

More than half the space in Interlocken was vacant in the wake of the technology industry meltdown in 2000-01, teaching him “the lesson of diversification.”

“We want to create a business park in the south that rivals the parks in the north, where companies will look first,” Baum said.

“We are the next generation of business parks. In the 1980s, business parks were designed where you had to drive to all of the amenities, like restaurants and retail. We are designing this park so you can walk, bike or run to the amenities. We will not just be a 9 a.m.-5 p.m. location; we want people to come to the park in the evenings for concerts, dinner or other reasons.”

Urban Frontier is building more than $20 million in roads, utilities and recreation facilities for the park, financed by a special district created by the city of Colorado Springs, to accommodate Amazon, the hotels and other new tenants, Baum said.

Baum has faced plenty of skepticism about the park in the past. He hosted a presentation about the park two years ago at the airport for commercial real estate agents.

“Most of them said it will never happen; nobody comes to the south or goes to the airport. South Colorado Springs had been forgotten. We wanted to prove them wrong,” Baum said.

Airport business park is taking off

Randy Dowis, a principal of NAI Highland, a local commercial real estate brokerage, was one of the doubters. He tried to make deals in the park, but the cost of extending roads and utilities to sites in the park made the deals unworkable. But he has become a believer that Peak Innovation Park will become a major destination for businesses, not just because of Amazon, but also as a result of the growth of the military space presence in the area with the arrival of U.S. Space Command and conversion of the Air Force Space Command into Space Force, a sixth military branch.

“There is no doubt it (the park) will have a tremendous impact on that whole area of Colorado Springs,” Dowis said.

“I don’t expect it (Amazon) to have as big an impact as you see in the Briargate or Interquest areas, but Space Command and Space Force could drive that sort of development and become a major catalyst for and have a tremendous impact on that submarket (southeast Colorado Springs).”

Although much of the park is south of Milton E. Proby Parkway, Baum wants to attract a developer to build a major conference hotel with up to 350 rooms and extensive meeting space on a site where the road turns north to provide access to the airport’s passenger terminal. He also envisions an outdoor retail and office center just to the west to provide shopping and other services to the hotel’s guests and some type of transportation system to get guests to the passenger terminal.

“This is a really special place,” Baum said. “When we met with Mayor (John) Suthers, he was passionate about his vision for this property. He was adamant about why development was happening and should happen. The property had been neglected, and he wanted to know how we could made this a gem for Colorado Springs.”

Suthers said the park’s “location has always been outstanding and we were convinced it had great potential. A good national and local economy, a new developer and local growth and momentum has unleashed that potential.” He predicted the park will generate thousands of jobs on the city’s southeast side and called the project “one of the most satisfying developments of my tenure as mayor.”

Artist's rendering shows plans for how the Peak Innovation Park at the Colorado Springs Airport might develop. Amazon distribution center and …

Nestled among schematics and reports filed this week with Colorado Springs planners is a sign bearing a familiar logo and details for a 4 million-square-foot building, which one city official estimates will be the largest in Colorado.  To many, the curving arrow reminiscent of a smile represents the online giant Amazon.

Aerospace Corp., a nonprofit defense and security research company, wants to more than double the size of its operation at the Colorado Spring…