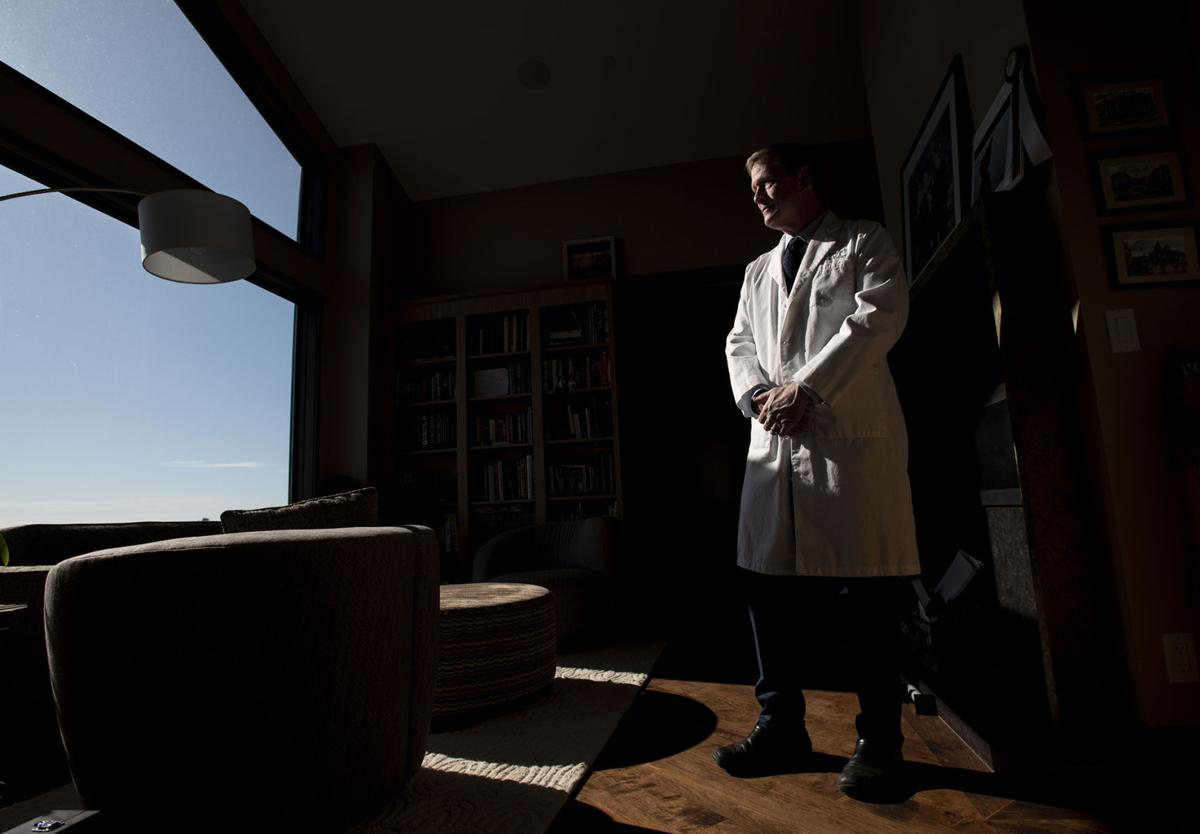 Dr. Jeff Moody, a urologist, at his home in Colorado Springs on Saturday, April 18, 2020. Dr. Moody recently was brought into the operating room to perform a lifesaving surgery on a patient, with no paycheck waiting in the end. Thousands of health care workers across Colorado have been furloughed, laid off or have had their paychecks slashed due to a large decrease in patient appointments that are not related to the novel coronavirus. (Chancey Bush/ The Gazette) 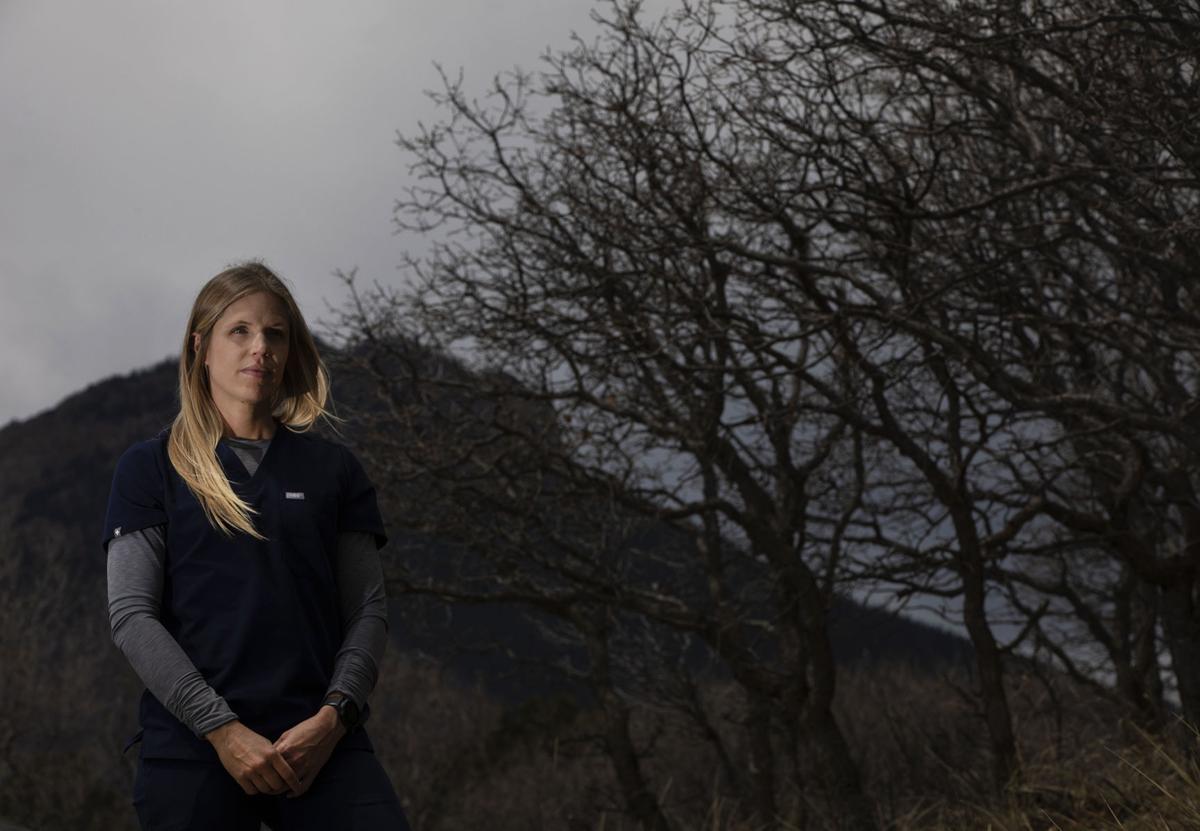 Shelby Johnson, a physician’s assistant for Concentra, was told to stay home as coronavirus infections spiked. Thousands of health care workers across Colorado have been furloughed, laid off or have had their paychecks slashed due to a large decrease in patient appointments that are not related to the novel coronavirus. (Chancey Bush/ The Gazette)

Dr. Jeff Moody, a urologist, at his home in Colorado Springs on Saturday, April 18, 2020. Dr. Moody recently was brought into the operating room to perform a lifesaving surgery on a patient, with no paycheck waiting in the end. Thousands of health care workers across Colorado have been furloughed, laid off or have had their paychecks slashed due to a large decrease in patient appointments that are not related to the novel coronavirus. (Chancey Bush/ The Gazette)

Shelby Johnson, a physician’s assistant for Concentra, was told to stay home as coronavirus infections spiked. Thousands of health care workers across Colorado have been furloughed, laid off or have had their paychecks slashed due to a large decrease in patient appointments that are not related to the novel coronavirus. (Chancey Bush/ The Gazette)

Just as coronavirus infections spiked and hospitals struggled to deal with a mushrooming pandemic, Shelby Johnson and other Colorado Springs clinicians were told to stay home.

Their shifts at a local urgent care were cut.

“I would have thought it would be the opposite — calling all hands on deck, cross-training, things like that,” said Johnson, a physician’s assistant for Concentra.

Across Colorado, thousands of health care workers have been furloughed, laid off or have had their paychecks slashed amid a precipitous drop in appointments for anything not related to the coronavirus. In a twist, the pink slips come at a time when healthy doctors and nurses have never been more needed, on the front-lines of a global pandemic.

More than 8,900 people in the health care and social assistance industry filed unemployment claims for the week ending April 4, a 5,500% increase from last year’s weekly average, according to the Colorado Department of Labor and Employment.

In all, 21,209 claims were filed during the last three weeks leading up to April 4, the state Labor Department said Friday. That’s compared to last year’s average of 161 claims a week.

For Johnson, who went at least two weeks without any shifts this month before being called back late last week, the cuts were a complete surprise. She wishes she could have helped out elsewhere, instead of waiting at home for a callback.

“It speaks to some of the holes in our health care system,” Johnson said.

It’s a national trend. That it’s happening during a once-in-a-generation pandemic is a paradox that highlights a key facet of today’s health care system: In a fee-for-service environment, if patients stop coming in, then doctors’ practices and health care companies aren’t getting paid.

And the first domino to fall has been staffing cuts and hiring freezes across the industry.

Michael Moore, a physical therapist, was removed from the staffing schedule at Concentra, which operates several urgent care and physical therapy clinics in the Pikes Peak region.

It proved to be a double-whammy — first he came down with COVID-19 in the pandemic’s early weeks, an experience that left him severely fatigued.

Now that he’s recovered, he’s unable to work because there’s few patients to treat. With Concentra specializing in workplace injuries, there’s fewer patients that need care due to the state’s “stay-at-home” order.

“I kind of thought health care would be untouchable,” Moore said. “I thought that would be the last industry that would be laying people off.”

Getting a clear snapshot of job losses in the Pikes Peak region is difficult.

Colorado Springs Orthopaedic Group recently furloughed a quarter of its staff — 50-60 people — largely due to a statewide ban on all elective procedures, said Joshua Heermans, a spokesman for the practice. It was implemented by the state to make sure hospital beds are free for coronavirus patients.

Those employees have not been given a return-to-work date, because it depends on when the ban is lifted. If it extends through May, more people may be furloughed, Heermans said.

Such procedures can include torn knee ligaments and joint replacements — anything that isn’t life-threatening, he said. So far, the clinic has done 260 procedures in March and April, one third of the total for those same months last year.

Peak Vista Community Health Centers, a massive provider catering largely to Medicaid patients, is undergoing “changes in staffing,” though the organization did not provide specifics.

About one-third of Penrose-St. Francis Health Services' hospital staff has been forced to stay home due to a dramatic decrease in demand for almost anything other than coronavirus care and child births, said Dr. Brian Erling, the system's president and CEO. The hospitals' emergency rooms are about half as busy as normal, and procedures are being done at 15% of their previous rate — again, due largely to the ban on elective procedures.

To avoid layoffs or furloughs, employees have been told to use vacation time. After that's gone, and they've used some future vacation hours borrowed from the system, they are being paid a flat rate of $15 an hour, Erling said.

It's also implemented a hiring freeze for most positions. And the hospital system's foundation is overseeing a time-off donation program, as well as a financial assistance program, for families in need.

It's all to avoid the worst of an unprecedented hit to the health care system, he said.

No furloughs, layoffs or pay cuts have been imposed at UCHealth, which operates and oversees four hospitals in El Paso and Teller counties, along with several freestanding emergency rooms, primary care offices and urgent care clinics. Still, the hospital system implemented a hiring freeze, one that affects nearly every position except for those related to the pandemic.

The hospital system also has started a relief fund that offers grants to employees experiencing financial hardships, and a time-off donation program that has amassed nearly 20,000 hours so far.

To offset their losses, doctors recently began pivoting to telemedicine in unprecedented fashion.

And some also began forgoing their own salaries to help their administrative staffs weather the downturn and keep their jobs.

At least 65% of Vanguard Skin Center’s patient visits evaporated as the pandemic set in — a withering total that left the practice scrambling to adjust. Nearly all that remained were appointments for life-threatening skin cancers.

It was even worse during the pandemic’s opening weeks, said Dr. Vinh Chung, the practice’s founder. But holding many appointments by phone or video has helped blunt that impact.

Even so, the practice’s finances are in the red, and they’re turning to reserves.

Chung stopped collecting his paycheck, part of an ethos that “the leaders eat last,” and the dozen other providers at his clinic took 50%-80% pay cuts.

Some positions of employees who left for graduate school or medical school have gone unfilled. And many of the practice’s 75 employees also voluntarily cut their hours or pay, he added.

It’s helped Vanguard avoid furloughs or layoffs for the time being. But it isn’t sustainable.

“For us, we’re going to fight as hard as we can,” Chung said. “We’re doing that because we believe this will pass.

“We feel we’ve just been dropped into the middle of this large lake and now we just have to figure out a way to swim to shore.”

Doctors also have gone without pay at Colorado Springs Urological Associates, which saw patient visits plummet at least 75% in the pandemic’s opening weeks before recovering slightly with the switch to virtual visits.

It isn’t like they aren’t working, though. Emergencies still arise — including one earlier this month where a woman suffered from a kidney stone that had become infected, requiring lifesaving surgery.

She tested negative for COVID-19, the disease caused by the novel coronavirus. But that gave little comfort to Dr. Jeffrey Moody, given that she had all the disease’s telltale symptoms, and tests for it can be unreliable.

Donning a mask, face shield and multiple gloves, Moody, a urologist, performed the surgery at 2 a.m. — no paycheck waiting at the end.

It was a rare moment where he was back in the operating room.

But if he doesn’t return on a more regular basis, he said layoffs would be inevitable.

“It’s fascinating — like it’s this law of unintended consequences,” Moody said. “You would think at the time of a pandemic, everyone would be busy as all get out.

“If you had to design a way to dismantle the medical system in America, this would probably be the way to do it.”

A window in time: 7 snapshots of life in the Pikes Peak region amid global pandemic

Colorado Springs-area doctors, nurses try to conquer coronavirus and their own fears: Stories from the front lines

Across the Pikes Peak region, Colorado Springs and beyond, doctors, nurses and hospital staff working on the front lines of the coronavirus pandemic are forced to walk a dangerous tightrope — asked to treat the sickest among us, while keeping the virus from their own spouses, children and friends.