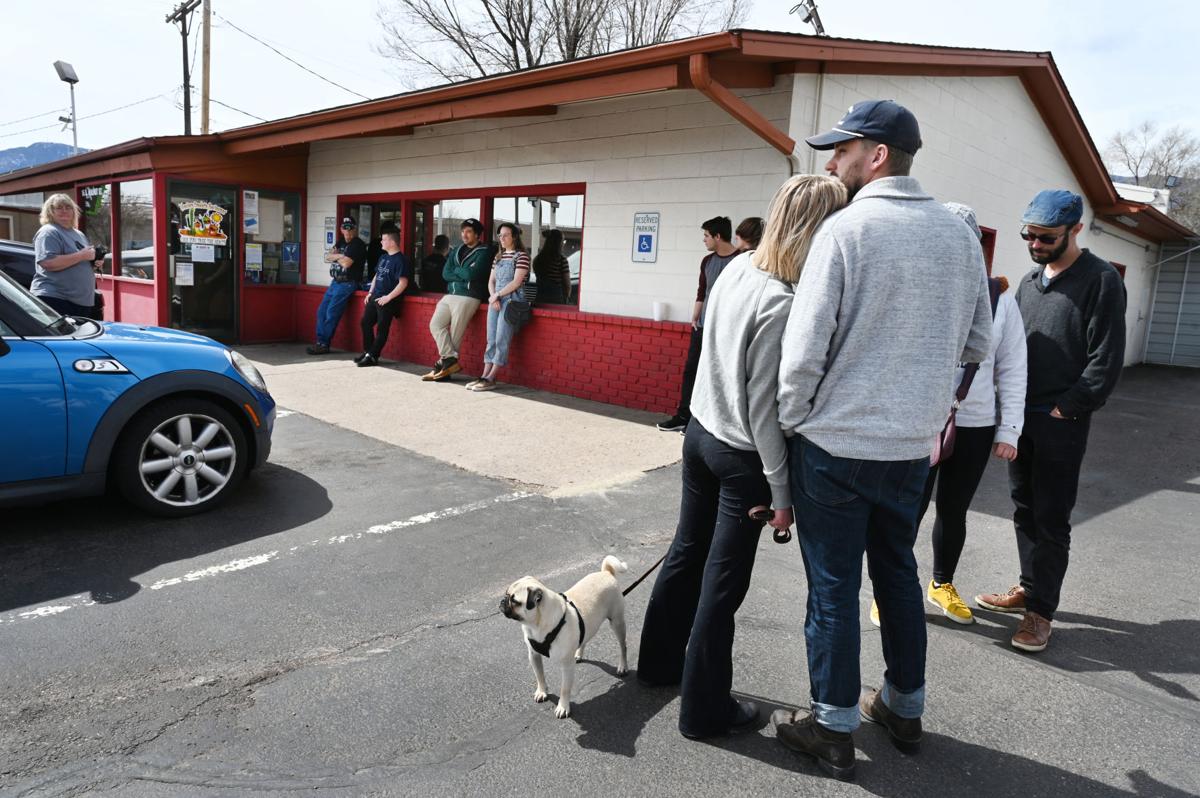 Some customers waited 3 to 4 hours to make sure they got what might have been the last food from the Western Omelette downtown in Colorado Springs on Sunday, March 29, 2020. (Photo by Jerilee Bennett, The Gazette) 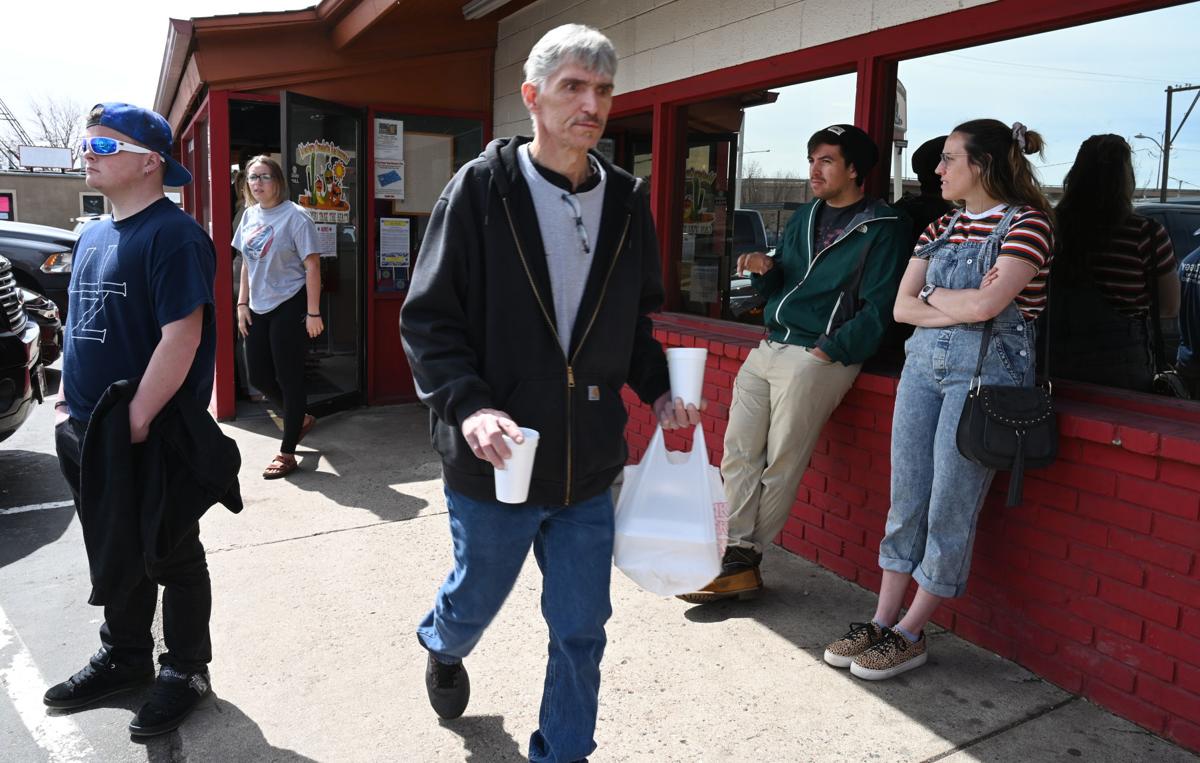 Some customers waited 3-4 hours to make sure they got what might have been the last food from the Western Omelette downtown in Colorado Springs on Sunday, March 29, 2020. (Photo by Jerilee Bennett, The Gazette) 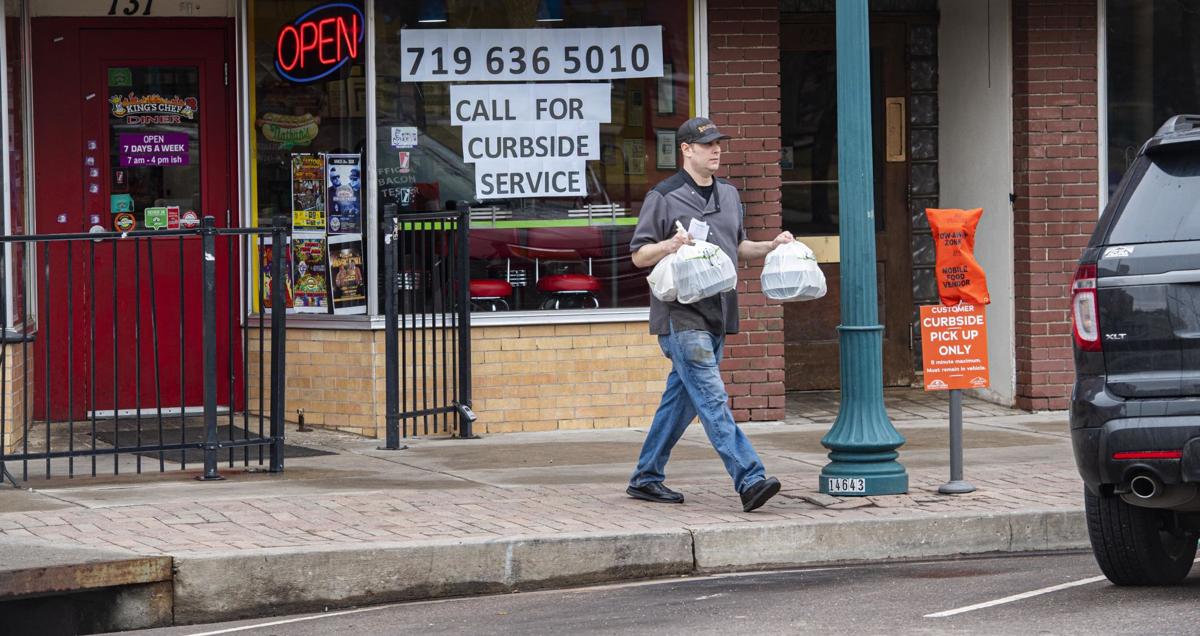 King’s Chef Diner employee Casey Bush delivers a meal to a customer at the curbside pick-up station in March outside the downtown Colorado Springs location on Bijou Street. The location has since closed.

Some customers waited 3 to 4 hours to make sure they got what might have been the last food from the Western Omelette downtown in Colorado Springs on Sunday, March 29, 2020. (Photo by Jerilee Bennett, The Gazette)

Some customers waited 3-4 hours to make sure they got what might have been the last food from the Western Omelette downtown in Colorado Springs on Sunday, March 29, 2020. (Photo by Jerilee Bennett, The Gazette)

King’s Chef Diner employee Casey Bush delivers a meal to a customer at the curbside pick-up station in March outside the downtown Colorado Springs location on Bijou Street. The location has since closed.

As a result, a growing number of familiar restaurant names — some of which have been around for decades — have opted to close after a 2-week-old state order to shutter dining rooms as a way to halt public gatherings and help contain the spread of the novel coronavirus.

King's Chef, the Colorado Springs eatery known for its fiery green chili, hash browns, breakfast burritos, burgers and other favorites, became one of the latest to cease operations when it announced its closing Sunday via social media.

The tiny, castle-like King's Chef building that first opened in the 1950s and now sits at 110 Costilla St., along with a traditional storefront at 131 E. Bijou St. that launched in 2008, have closed. The status of a Fountain location that opened two years ago wasn't known.

"In light of the current global pandemic brought on by COVID-19 and in compliance with the Government Mandate and its impact at a local level, thoughtful consideration has been made about the future of Kings Chef Diner," according to a Facebook post. "It comes with an incredibly heavy heart that we must announce we will be closing our doors.

"We wish everyone nothing but health and peace as all of us affected by this crisis attempt to navigate these incredibly challenging times. We thank everyone for your absolutely incredible support and kind words."

It wasn't clear whether the King's Chef closings are temporary or permanent.

In any case, more than 500 Facebook comments bemoaned the loss of King's Chef, whose classic diner food had won legions of fans over several decades.

"Kings Chef fed my family for 4 generations," one commenter wrote. "You'll be missed!"

"My favorite Colorado breakfast and lunch and late night," another said.

In the last two weeks, Gov. Jared Polis ordered the closure of dine-in restaurants and bars, gyms, theaters and other places where the public gathers. He followed up that order with a requirement that nonessential businesses halve their on-site workforce. He then issued a stay-at-home order last week for state residents.

Even before Polis' order took effect, Colorado's restaurant industry had been taking a beating.

From March 1 to March 22, restaurants lost an estimated $465 million in sales, with locations seeing an average 51% decline in sales during that period, according to a Colorado Restaurant Association survey of its members.

Last year, there were 12,500 eating and drinking establishments in the state. Based on that number, 5,500 locations now have temporarily closed in Colorado and 338 have permanently closed, the Restaurant Association's survey shows.

And so far, the association estimates at least 60,000 restaurant employees have been laid off and tens of thousands more workers are receiving no paychecks while being furloughed.

The Keg Lounge at 730 Manitou Ave. in Manitou Springs, where customers enjoy burgers and chicken fried chicken, announced its closing Monday on Facebook.

"After careful consideration and deliberation, we have made the tough decision to stop all service at The Keg for at least the next 30 days," the post said.

The closings by King's Chef and The Keg follow similar announcements by Western Omelette Restaurant and Urban Egg, A Daytime Eatery.

After 28 years, Western Omelette closed at 16 S. Walnut St. on Sunday afternoon, after catering to a long line of loyal customers who came for a last meal. Western Omelette locations in Fountain, south of the Springs, and in Calhan, east of town, are still open for carryout.

"Thank you Colorado Springs!" according to a post on the restaurant's website. "We truly felt the love and support of our amazing community on our last day, Sunday, March 29. We promise to do everything we can to re-open in the near future. After what you did for us, we owed it to all of you to keep the tradition alive."

Urban Egg, part of a chain by Colorado Springs-based Rocky Mountain Restaurant Group, has closed at 28 S. Tejon St. in downtown, which has become somewhat of a ghost town as many employees work from their homes.

Salaried managers at the downtown location have moved to Urban Egg locations at Powers and Dublin boulevards in the Dublin Commons shopping center; at 5262 N. Nevada Ave. in University Village Colorado; and at 9420 Briar Village Point in the Briargate area.

Those three locations continue to offer carryout and curbside service, although they're now closed Mondays. Managers also took a 30% pay cut as part of their reduction in hours.

"It's less expensive to close than to try and stay open and make money during this," Price said of dealing with the coronavirus pandemic.

Price said he's grateful he can continue to offer curbside and carryout meals, and is considering adding delivery. He'll also consider whether to seek help through the federal government's financial assistance package approved by Congress last week, although he's leery of loans that might add to his debt load.

He intends to reopen as soon as he can and rehire the 275 workers he furloughed when his restaurants closed their dining rooms and some of the locations were consolidated with others.

"My hope is that when this is over," Price said, "we're back to business and everybody's back working for us and we pick up where we left off and start to rebuild and get on with things."

The Pikes Peak region’s red-hot housing market showed no signs of cooling off in March, despite the onset of the coronavirus pandemic.