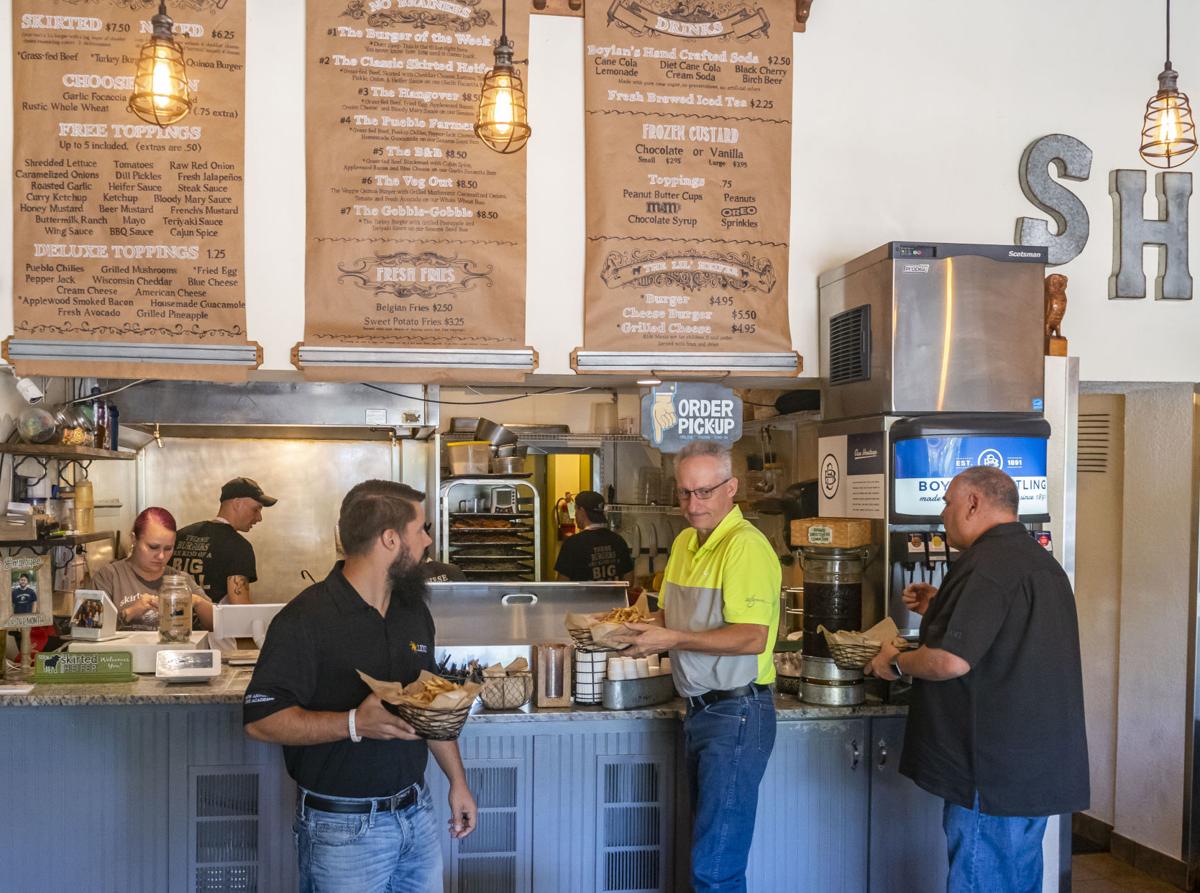 Customers order their burgers at the downtown Skirted Heifer on Wednesday, Sept. 12, 2018 in Colorado Springs. 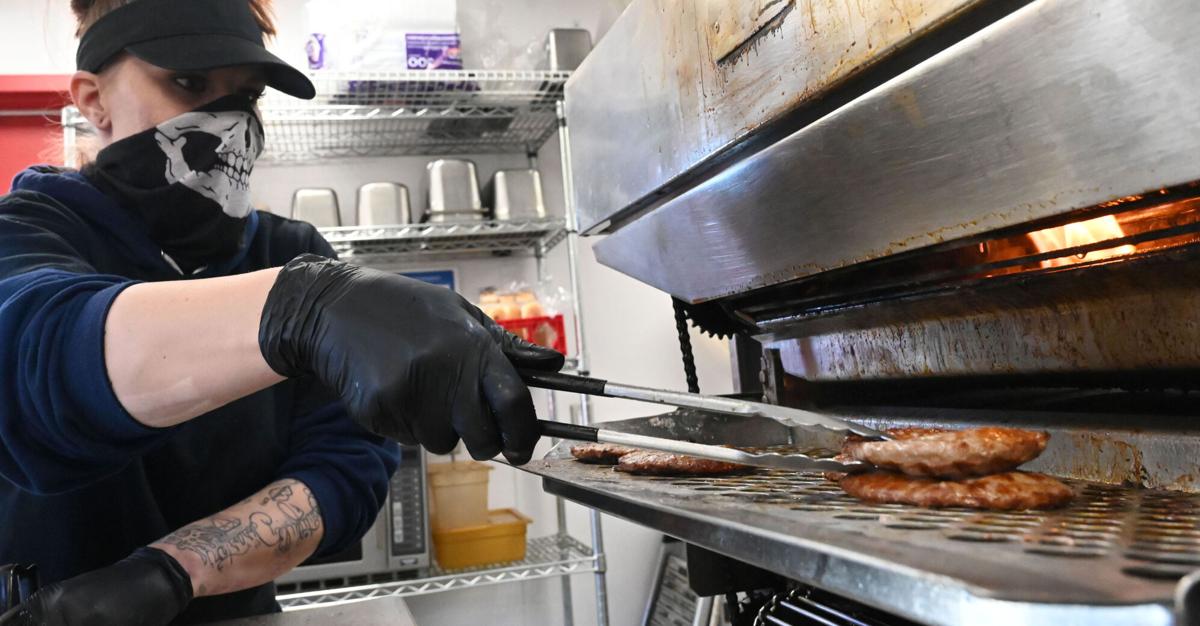 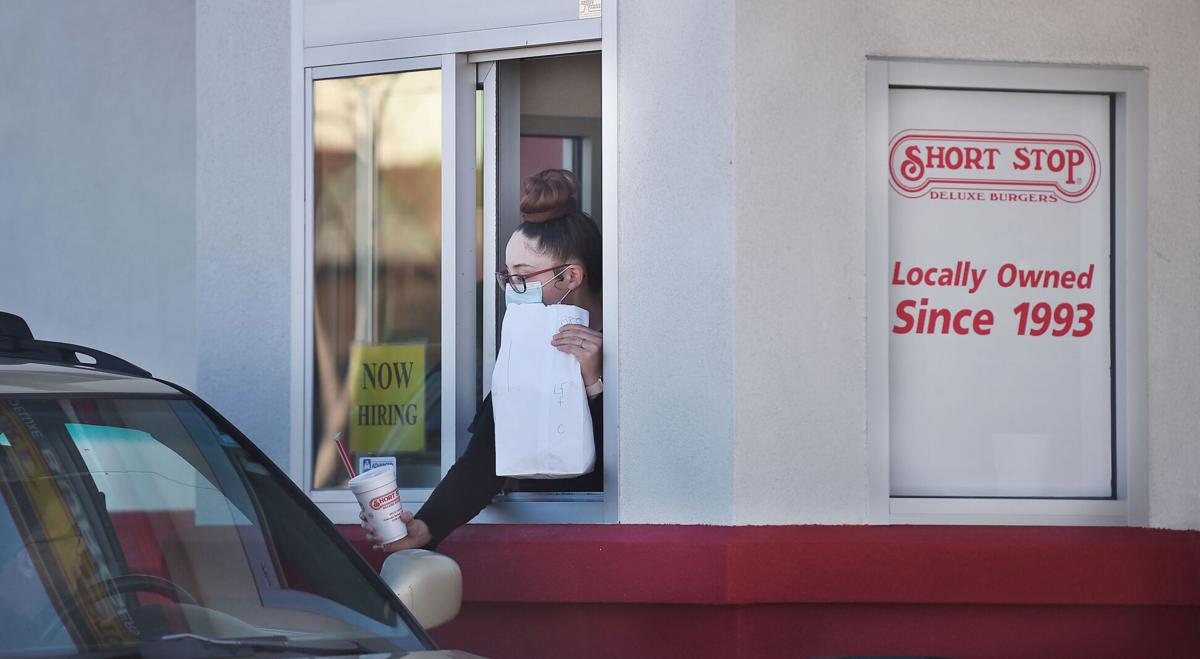 Short Stop Burgers employee Julia Felix hands an order to a customer from the drive-thru window on Tuesday, Nov. 17, 2020. (Photo by Jerilee Bennett, The Gazette) 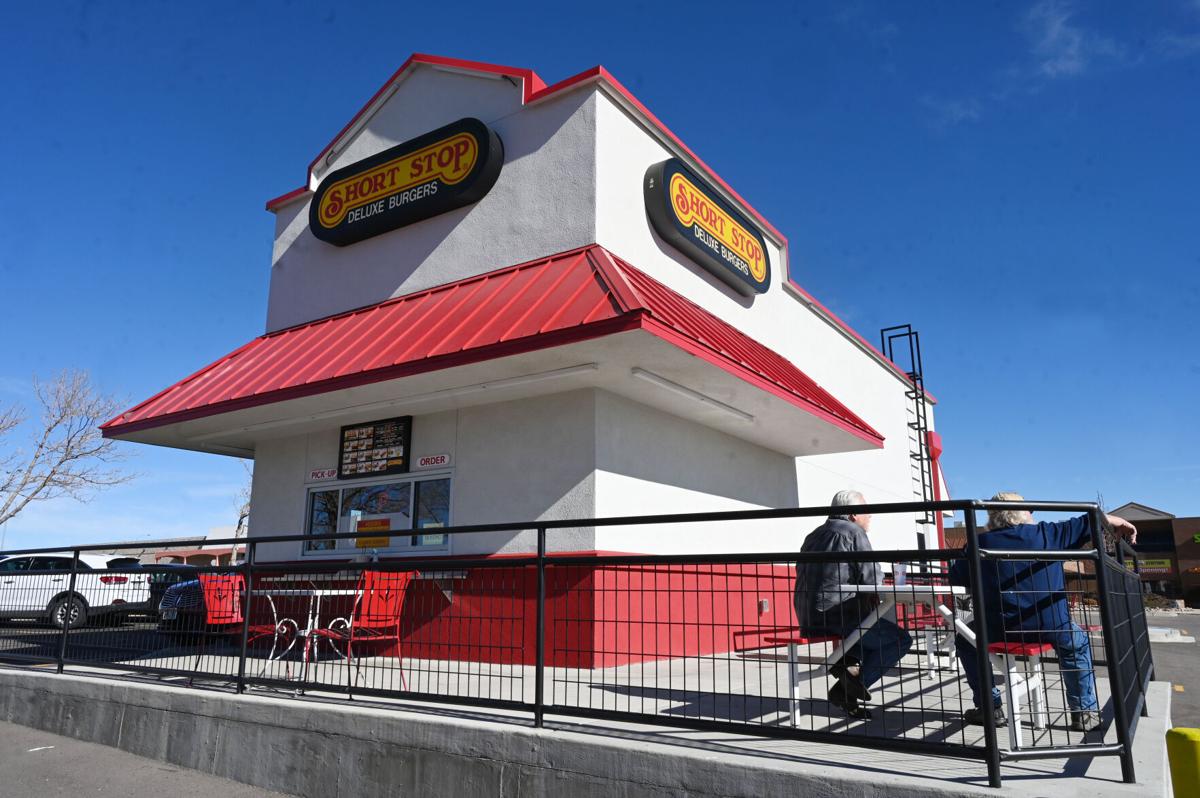 At the Short Stop Burgers on Powers Blvd. there is no indoor seating, but customers sit at an outdoor table on Tuesday, Nov. 17, 2020. (Photo by Jerilee Bennett, The Gazette) 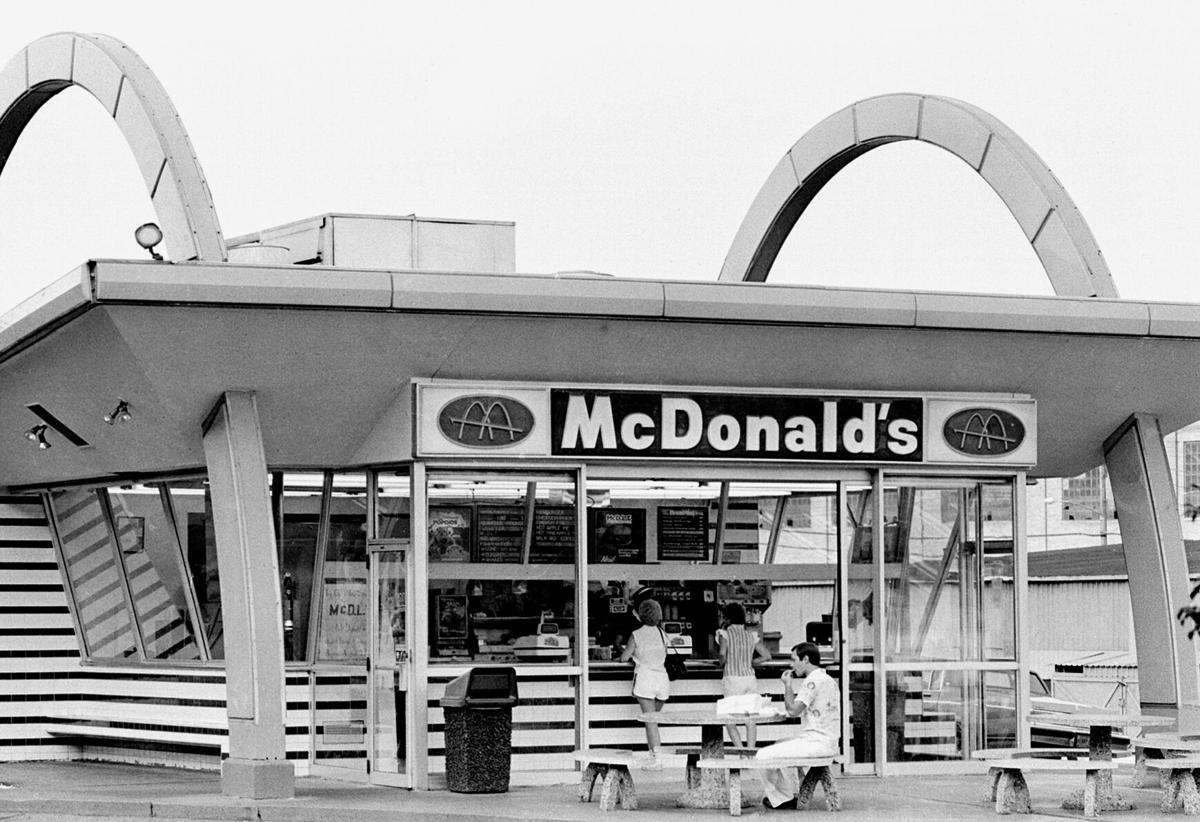 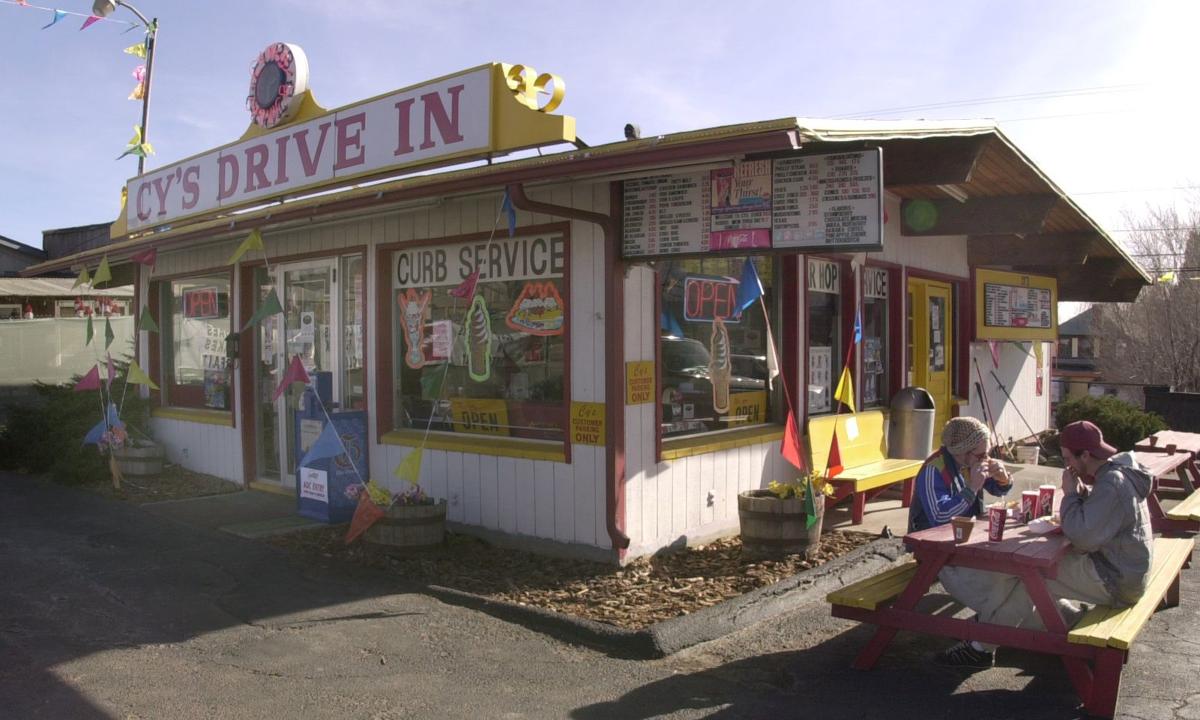 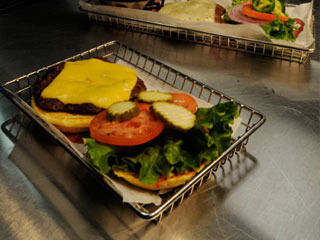 A 1/3 lb. SmashBurger classic. Photo by (The Gazette/Jerilee Bennett) 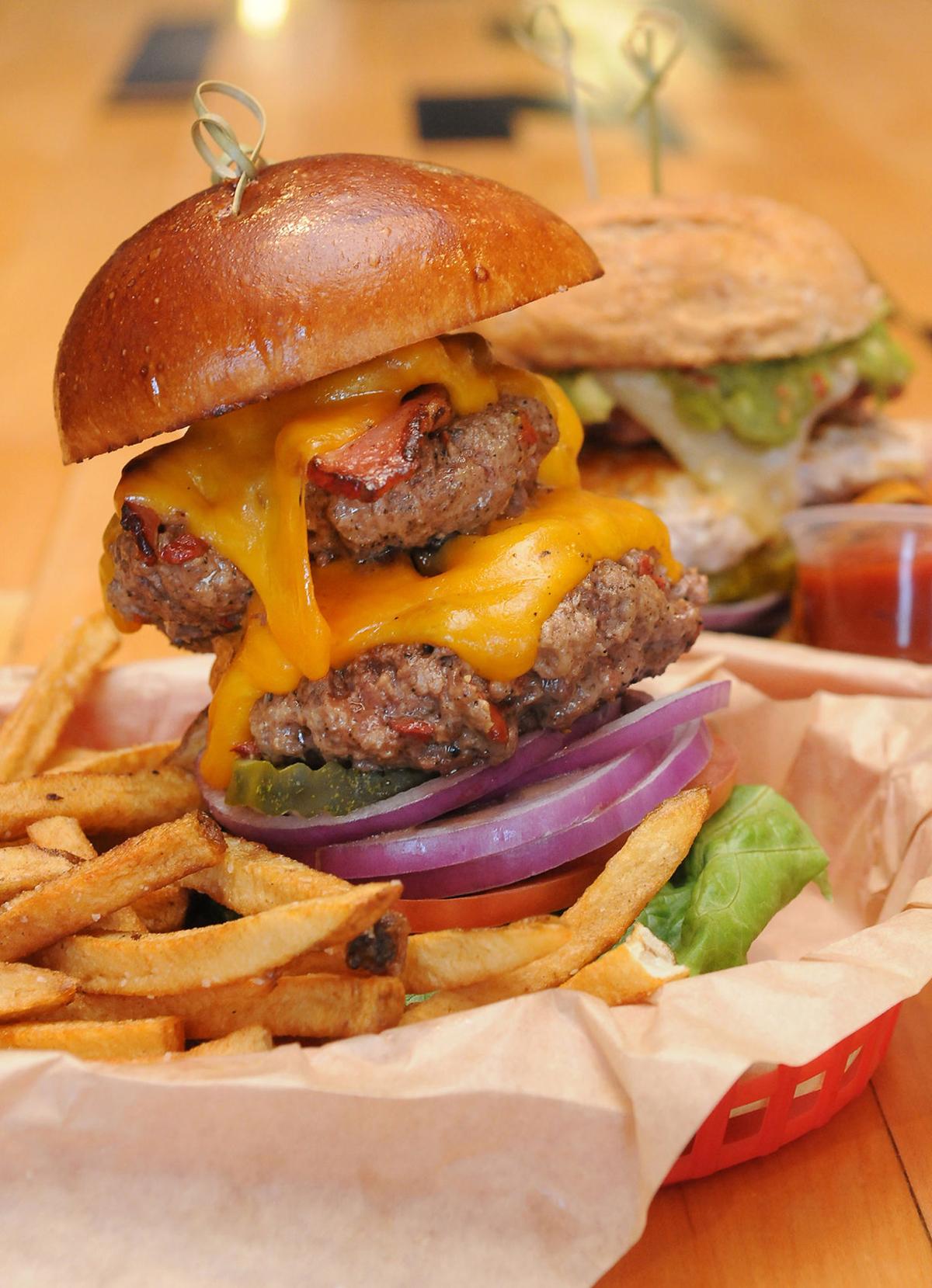 This 2014 photo shows the Bingo Burger Combo “The Steel City,” featuring a Double Bingo Burger with bacon, caramelized onions and cheddar cheese served with hand-cut fries and, in the background, a “Blackout” ground Colorado-sourced chicken, bacon, Swiss and guacamole on a multigrain bun served with sweet potato fries. 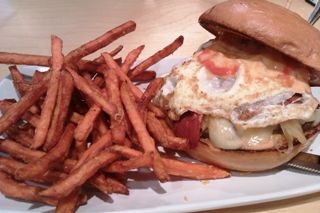 Customers order their burgers at the downtown Skirted Heifer on Wednesday, Sept. 12, 2018 in Colorado Springs.

Short Stop Burgers employee Julia Felix hands an order to a customer from the drive-thru window on Tuesday, Nov. 17, 2020. (Photo by Jerilee Bennett, The Gazette)

At the Short Stop Burgers on Powers Blvd. there is no indoor seating, but customers sit at an outdoor table on Tuesday, Nov. 17, 2020. (Photo by Jerilee Bennett, The Gazette)

A 1/3 lb. SmashBurger classic. Photo by (The Gazette/Jerilee Bennett)

This 2014 photo shows the Bingo Burger Combo “The Steel City,” featuring a Double Bingo Burger with bacon, caramelized onions and cheddar cheese served with hand-cut fries and, in the background, a “Blackout” ground Colorado-sourced chicken, bacon, Swiss and guacamole on a multigrain bun served with sweet potato fries.

Good hamburgers and burger restaurants are plentiful in Colorado Springs.

The Southern California-based chain, founded in 1948 and with a legion of fans, has joined other national brands and local mainstays that serve the Pikes Peak region; on Friday, it opened its first Colorado Springs restaurant, southeast of InterQuest and Voyager parkways on the city's north side, along with one in Aurora.

With In-N-Out's arrival, The Gazette has turned the spotlight on hamburgers — explaining the origins of the fast-food staple, remembering a now-shuttered favorite local chain and focusing on area burger joints.

Some of those longtime Colorado Springs restaurants are well aware that In-N-Out enjoys a passionate following among customers who love its simple menu of burgers, fries and shakes.

But local burger restaurants have their fans, too. And some say they're not worried about In-N-Out, just like they don't fret about the McDonald's, Wendy's and Burger Kings of the hamburger world.

"We joke all the time about how we'd love to have a contest with In-N-Out," said Anissa Hornsey, co-owner of The Drive-In Tasty Freeze at 2309 N. Weber St., behind the Safeway-anchored Bon Shopping Center in the Springs' historic Old North End.

The Drive-in Tasty Freeze is a trip down memory lane — a tiny, neighborhood place that opened in 1955 and still caters to nearby residents who walk, bike or drive over for burgers, hot dogs and ice cream. Hornsey and husband Kevin Bergsten bought the location in April 2019.

A previous owner had stopped serving hamburgers and decided to stick with hot dogs and ice cream. But after hearing from customers who wanted burgers back on the menu, Hornsey and Bergsten bought a grill and started cooking shortly after their purchase of the drive-in.

Hornsey says she tops her burgers with a homemade secret sauce, using a recipe from the previous owner that she's tweaked a bit. The sauce gives her burgers a taste that she'll match anytime against In-N-Out, she said.

And while In-N-Out's roots go back decades, so do those of The Drive-In Tasty Freeze. Along with their burgers, ice cream and other menu items, the nostalgic look and feel of the neighborhood drive-in makes it as special as any new place coming to town, Hornsey said.

"It's a little gem," she said. "We've got a 100-year-old tree on the patio that provides great shade in the summer. It's right on the (Shooks Run) trail. I don't think that In-N-Out coming to town is going to affect us in any way, shape or form. Everybody, for one, absolutely loves our burgers. We have the charm of having a vintage, Americana, virtual drive-in kind of concept."

Short Stop Deluxe Burgers in Colorado Springs can't match In-N-Out for longevity; it's only been open a little less than 30 years. And unlike In-N-Out and other big chains, Short Stop boasts just a single location; it moved last year from its longtime home near Platte Avenue and Circle Drive to 5819 Palmer Park Blvd., southeast of Powers and Palmer Park boulevards.

Like The Tasty Freeze Drive-In, Short Stop is a small local burger joint. It has a drive-thru, a walk-up window and a small patio, but no indoor seating; its menu includes burgers, hot dogs, chicken sandwiches, fries, soft drinks and shakes.

So how does Short Stop respond to the arrival of In-N-Out? It doesn't, other than to continue doing what's always worked well — serving quality food at competitive prices, providing a consistent product and listening to customers, said owner Ted Vong.

"We're not changing anything as far as that's concerned," he said.

In-N-Out has a stronger following than many burger places, and an excellent operation, Vong said. Some of his customers no doubt will want to try In-N-Out's north-side restaurant, and more might be tempted when the chain opens a second location in 2021 at Powers and Constitution Avenue, much closer to Short Stop, he said.

But Vong has seen competitors come to town in the past. He remembers Carl's Jr., another California burger import, arriving in the Springs years ago amid speculation that it would dominate the market.

Short Stop, however, has survived and even prospered over the years by sticking to its core values of good food, consistency and customer service, Vong said. He said he's doubled his sales volume at his new location and is on pace to crack the $1 million mark in annual sales.

"Our goal is just to continue to take care of our customers that have been coming to us and supporting us throughout the years, and hopefully that they'll remain loyal to us," Vong said.

Some businesses change the way they do business as they try to fend off their competitors, as opposed to sticking with what they're good at, he said.

"Even in the food industry, no matter what, burgers, pizza, chicken, it doesn't matter what you're in," Vong said. "People look for that consistency within a company or any organization that they support. And when that consistency goes away, and it's no longer what they've been looking for, then that's what deviates them to go to someone else. That's why we don't ever try to chase any big chains or anybody that's coming in, to change anything. We do what we're doing well and it's why customers come to us."

In N Out's arrival adds to an already robust hamburger landscape. Here's a sampling of burger joints, both chain and local, in Colorado Springs. Obviously, these aren't the only burger places or the only place to get a great hamburger; many restaurants that are not devoted to the hamburger are still known for their burger creations.

• Brakeman's Burgers, Brews and Shakes (opened in The Old Depot in October)

• Drifter's Hamburgers (opened in 2008; a second location, which opened in 2012, closed recently)

• Skirted Heifer (opened downtown in 2014, now has second location on city's east side)

Shake Shack, Whataburger, White Castle, Fuddrucker's and Johnny Rockets are among several national and regional burger brands that don't have a presence in Colorado Springs and the Pikes Peak region.

Here are the readers' picks for best burger joint in the 2020 Best of the Springs.

GONE BUT NOT FORGOTTEN

Conway’s Red Top, a nearly 70-year-old Colorado Springs institution known for its giant "one’s a meal" hamburgers, closed its last remaining restaurant in August 2012. At its height, the family-run chain had five locations in the Springs area and one in Pueblo. It was at a Conway's that then-presidential candidate John McCain chose to have lunch during a campaign stop in 2008. But increasing competition and a struggling economy at the time took their toll; family members chose to close the business rather than face IRS seizure for delinquent federal withholding tax payments.

The history of the hamburger is a bit murky, though the name apparently comes from Hamburg, Germany, which was known as an exporter of high-quality beef; the earliest known hamburger patties were known as Hamburg steak. With an influx of German immigrants to the U.S. in the mid-1800s, American restaurants began to serve a "Hamburg-style" steak.

"The hamburger seems to have made its jump from plate to bun in the last decades of the 19th century, though the site of this transformation is highly contested," History.com states. "Lunch wagons, fair stands and roadside restaurants in Wisconsin, Connecticut, Ohio, New York and Texas have all been put forward as possible sites of the hamburger’s birth. Whatever its genesis, the burger-on-a-bun found its first wide audience at the 1904 St. Louis World’s Fair."

White Castle is the nation's oldest burger chain; the first White Castle location opened in 1921. In 2014, Time magazine declared the chain's Original Slider the most influential burger of all time.

• Americans eat an estimated 50 billion hamburgers a year, according to a 2013 report.

• National Hamburger Day is May 28. (Not to be confused with National Cheeseburger Day, Sept. 18)

• Seattle is the most hamburger-loving city in the U.S., according to a survey done for National Hamburger Day.

• McDonald's best-known burger creations were not on the menu originally.  The Big Mac, developed by owner/operator Jim Delligatti of Pittsburgh, was added to the national menu in the 1968. The Quarter Pounder came along in 1973.

In-N-Out Burger, the uber-popular fast-food chain that announced three years ago it would expand to Colorado, opened its first restaurant in the state Friday morning on Colorado Springs' north side, southeast of InterQuest and Voyager parkways in the Victory Ridge development.