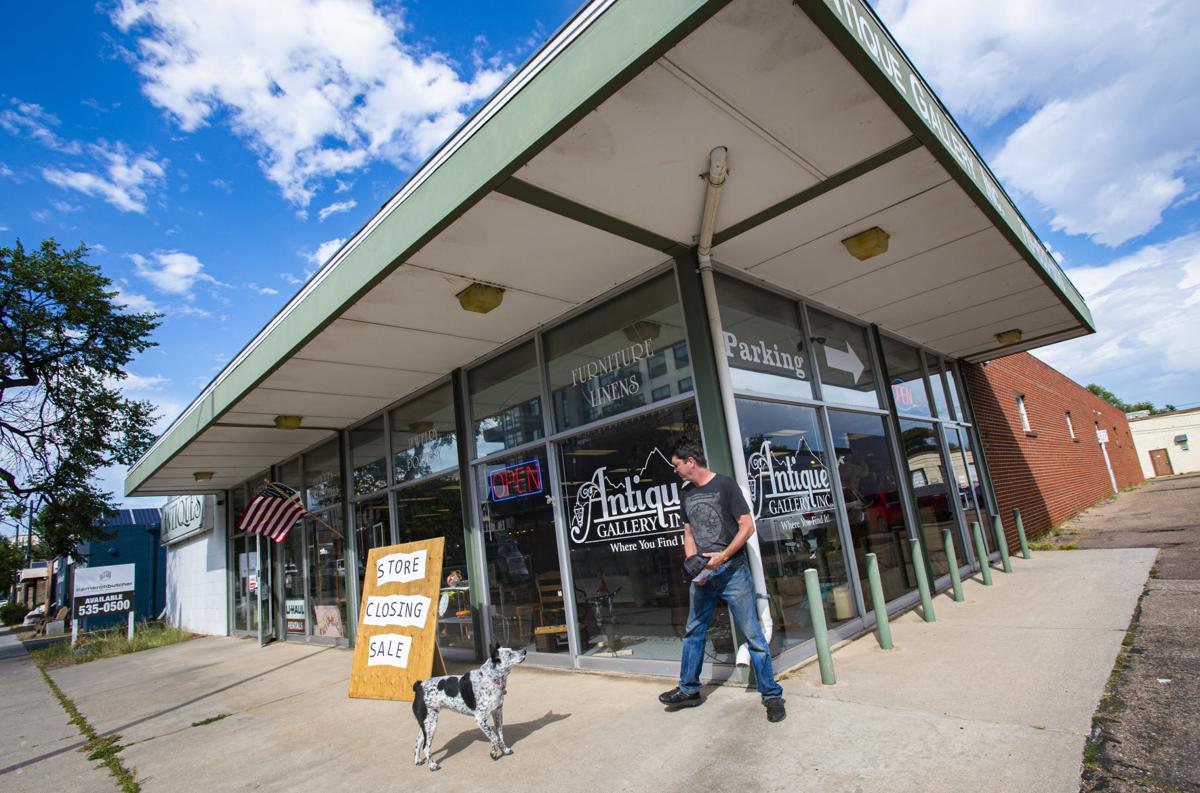 Jason Carr stands outside the Antique Gallery on Wahsatch Avenue last week. Jason and his wife, Tina Carr, are selling the building and closing the store to make room for apartments and/or restaurant. The store closes at the end of September. 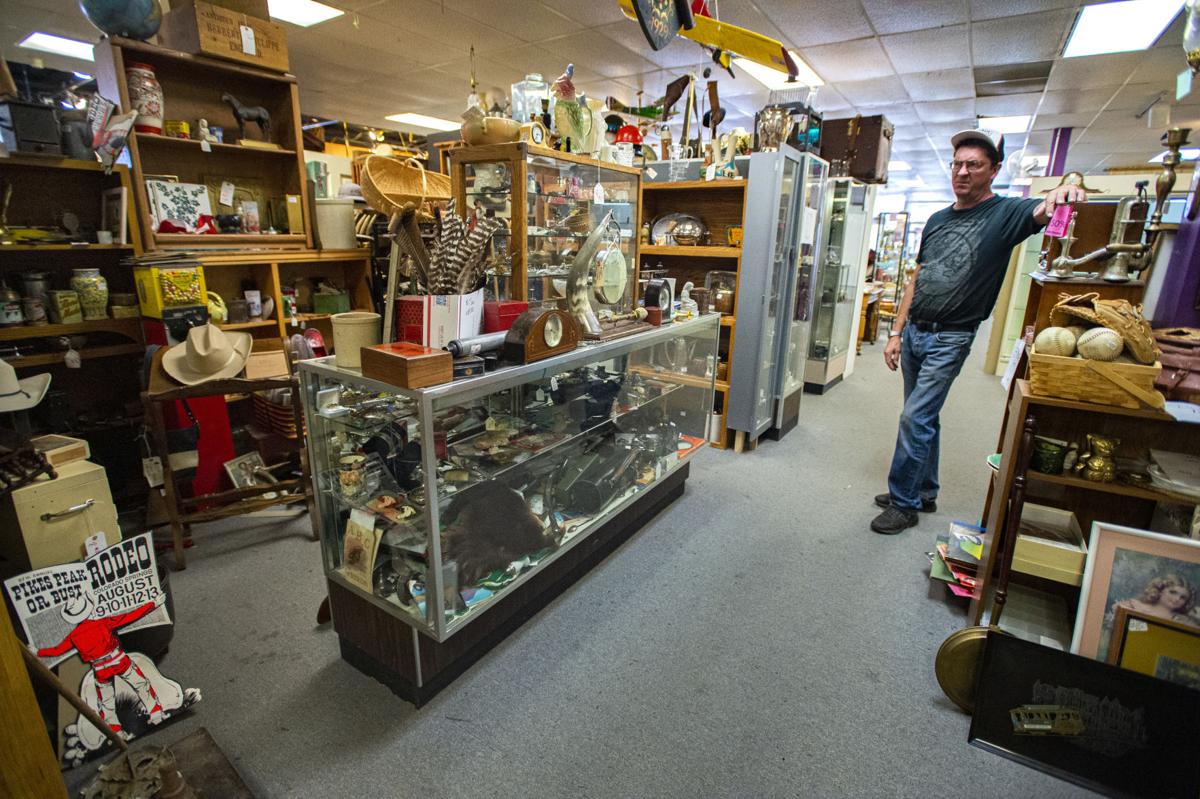 Jason Carr stands among some of the antiques in his store, which is a minimall that leases booths to roughly 50 dealers.

Jason Carr stands outside the Antique Gallery on Wahsatch Avenue last week. Jason and his wife, Tina Carr, are selling the building and closing the store to make room for apartments and/or restaurant. The store closes at the end of September.

Jason Carr stands among some of the antiques in his store, which is a minimall that leases booths to roughly 50 dealers.

Antiques last for decades or even centuries. But the lifespan of an antique business might not be nearly as long.

After 19 years of loving, nurturing and embracing things that are old, husband-and-wife owners Jason and Tina Carr are closing the Antique Gallery, at 117 S. Wahsatch Ave. in downtown Colorado Springs.

The business, a minimall where the Carrs lease booths to roughly 50 antique dealers and sell consignment items from individuals, will shut its doors Sept. 30.

Consumer interest in antiques has waned over the years, Jason Carr said.

“It’s kind of a shrinking type of business,” he said. “We have seen our earnings decline. Younger people are not drawn to collecting old stuff, from what we can tell. Or maybe we’ve made mistakes in advertising ... But the business just hasn’t been all that profitable.”

Antique Gallery vendors sell furniture, paintings, jewelry, pottery, toys, collectibles and other items. Many have started discounting wares by 20% to as much as 75% in anticipation of the closing, Jason said.

The Carrs’ decision to close, however, isn’t just about a softer market for antiques. They also have an opportunity to sell their building for a good price.

“It’s very much bittersweet,” Jason Carr said. “We’ve been hearing that from a lot of our customers. But it’s a great time to sell a piece of commercial property in Colorado Springs.”

A limited liability company formed by Doug Stimple and George Lenz, partners at Colorado Springs homebuilder and developer Classic Cos., has contracted to buy the building.

Stimple, Classic’s CEO, said he and Lenz are studying what to do with the property, which is a single-story, 10,200-square-foot building on a little less than one-half acre, El Paso County land records show.

Plans could include refurbishing the structure or tearing it down and constructing a three- to four-story apartment building with a first-floor restaurant, Stimple said.

The Antique Gallery is across the street from the 171-unit 333 ECO apartments, which opened last year. 333 ECO is one of a growing number of downtown apartment projects being built in response to renters who want to live in an urban environment and walk or bike to coffee shops, restaurants, bars and the like.

“It’s strong and it’s going to get stronger,” Stimple said of the downtown apartment market.

He and Lenz envision apartments that would be studio units or so-called micro apartments of a few hundred square feet that would be more affordable for people who aren’t making top dollar, yet want to live and work downtown.

“We have a crying need throughout Colorado Springs for affordable housing, for workforce housing,” Stimple said.

“You think about all the bars and restaurants opening up down there, the new (Switchbacks soccer) stadium, the Olympic Museum. There’ll be a fair number of employees associated with all that, and not everybody can afford $1,500 to $1,800 a month in rent.”

Stimple said he’s not sure of the rents at the project he and Lenz are discussing, but they’re targeting around $1,000 a month.

“We don’t know if it pencils at that yet, either,” Stimple said. “It’s early in the process. We’ve got some wood to chop.”

How the Carrs came to own and operate the Antique Gallery is the kind of story that could make for a Hallmark television movie.

Jason said he and Tina had their first date in 1991 and visited the Antique Gallery when it operated downtown under different ownership in the old Ute 70 movie theater at 21 N. Nevada Ave. The building is now home to the CityRock climbing gym.

Tina, an accountant by trade, said she always loved antiques growing up, especially when she’d visit her father’s mother in the Kentucky hills.

Her dream, she said, was to buy an antique store when she retired.

In 2000, and after she and Jason had married, Tina said she was looking through the Sunday newspaper when she saw an advertisement: “large antique mall for sale.” It turned out to be the same Antique Gallery they had visited on their first date.

With Jason’s support, Tina said, the couple bought the business and have operated it ever since.

“It was my dream,” she said. “When this business came up for sale, and a banker was willing to give me the money, I took it. I just jumped. I jumped in. And now we’re nearly two decades later.”

In 2007, the Carrs lost their lease on the 21 N. Nevada Ave. space because of redevelopment efforts planned on that downtown block, Jason said. They bought the building at 117 S. Wahsatch and moved the business there.

While operating the Antique Gallery, Jason also opened a U-Haul dealership at the site three years ago. He’s giving up that business, too.

Tina plans to become semiretired but will continue an estate-sale hosting business she operates with a friend. For his part, Jason said he plans to find a job “that pays a little bit better money and doesn’t take 70 hours a week.”

But they’ll miss the antique business.

“Because of all of our friends that have been partners in this business,” Jason said.

“We’re a booth mall, which means we rent spaces to clients. And so most of those people, all of those people, have become friends over the years. We have many clients that have been here for more years than we’ve been involved. Not to mention our regular customers and even strangers that walk in here that we enjoy very much.”