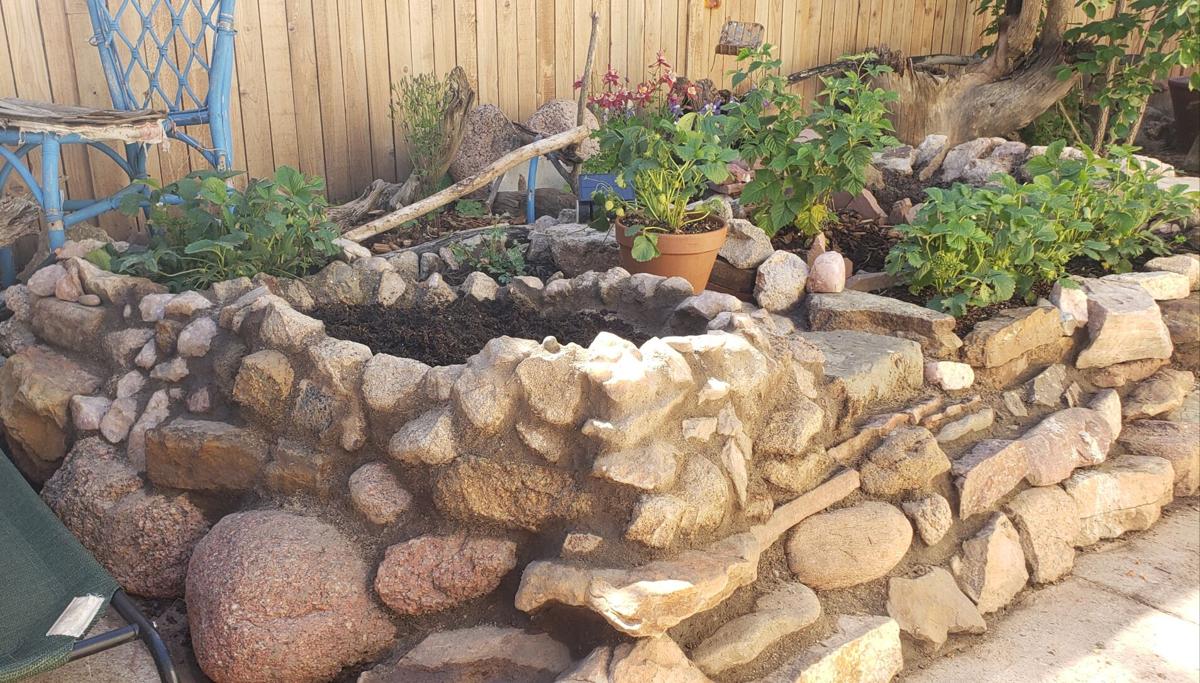 After years of gardening fails, Colorado Springs homeowner Stephanie Earls is hoping a new perspective on (and repurposing of) her west-side soil will do the trick.

Making a plant fortress, two birds with one stone: Excavate the clay dirt to use as mortar for your rock border, then fill the void with good topsoil.

Colorado's heavy clay mud looks, feels and acts a whole lot like store-bought mortar. Throw in a little of that product -- a mixture of sand, lime and Portland cement -- to add extra stability and staying power to your mud-built creation.

After years of gardening fails, Colorado Springs homeowner Stephanie Earls is hoping a new perspective on (and repurposing of) her west-side soil will do the trick.

In West Virginia, Washington and New York, minimal effort was all it took. An impromptu toss of seeds on random ground on a random spring day, and in six weeks I was a gardener.

When I moved into my house on Colorado Springs’ west side in 2013, the rows and rows of rock-edged planting beds called with visions of a healthy, fantasy future: me growing my own fruits and veggies, padding outside in a long skirt with a wicker flower-gathering basket to collect breakfast, lunch, dinner.

Colorado soil is a tough cookie, though, and it likes to fight dirty. I’d never before met soil that I honestly, truly, hated — and that honestly, truly seemed to hate me back.

My lavender thrived for one season, and one season only. Same for the thyme, hollyhocks, tomato, pear tree (planted by the previous owner), two out of four hops plants, and pretty much everything I planted in the big bed out front except two clearance rack columbines and every weed seed that found purchase there. The ground was a sere and angry place, a backwards Plant Sematary that turned perennials into annuals no matter how much fertilizer, root ball fungi or soil “amending” I did.

I knew my enemy, and his name was clay. Clay soil = no drainage = root rot = plant death. I thought I could negotiate with clay. I was wrong. It had to go.

Soil content varies depending on where you live and where you look, but in many areas of Colorado it’s heavy clay, with very little of the organic material that makes for good growing. In my yard, dig a big hole, fill it with water, and you’ve got a pool for a day. Squeeze a handful of mud and leave in the sun for a few hours, you’ve got a sculpture.

My dirt may be no good for plantings that are not weeds, but what I didn’t realize until a few months ago is that it is excellent for something else.

Mudbrick and mud mortar construction dates at least to the 10th century BC, and was used to build the structures of the ancient city of Jericho. Ancient dwellings made or mortared with mud still stand everywhere from Ireland to Anatolia.

If Colorado dirt wasn’t a good home for my plants, I would use it to build an ivory tower that was.

I had a pile of good rocks and a mountain of concrete chunks (aka urbanite) from a basement remodel. So on a sunny midspring day, I mined a few shovel scoops of the reddest, cleanest dirt and added water until the texture was like oatmeal. It looked exactly like the store-bought mortar I’d used a few years ago to point a faux brick wall inside the house. I then used the mud mixture to mortar a wobbly, dry-stacked border of rocks and concrete, just to see how strong the joints would be.

After an afternoon of baking in the sun, the wall was solid. No wobbles whatsoever. I added another row of rocks and concrete chunks, then another, until I had a 2-foot-tall tower.

Mud mortar isn’t the strongest — and mine didn’t have any added “connective tissue” like grass or horse hair — so for the top row of rocks, I threw in a little cement mix for extra staying power.

I filled up the empty space inside the tower with good dirt, planting soil and topsoil. The two baby pumpkins that reside there now appear to be thriving, but that’s how everything looked right before it started to die. I’ll have to get back to you on that one.

And in case this whole home farm-to-table thing doesn’t work out, now I’ve got a new hobby — one that will stand the test of time, as a garden wall, xeriscape feature and, I bet, a whole lot more.