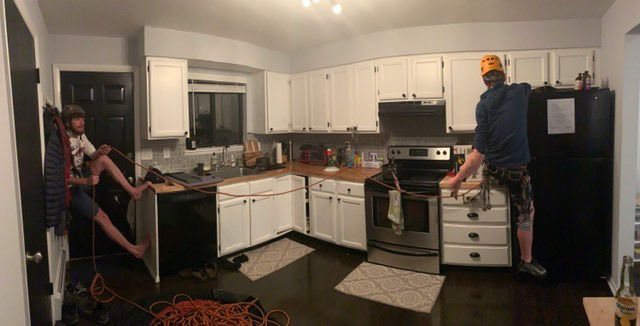 Roommates Daniel Morris, left, and Colin Chupik take to climbing in their kitchen. 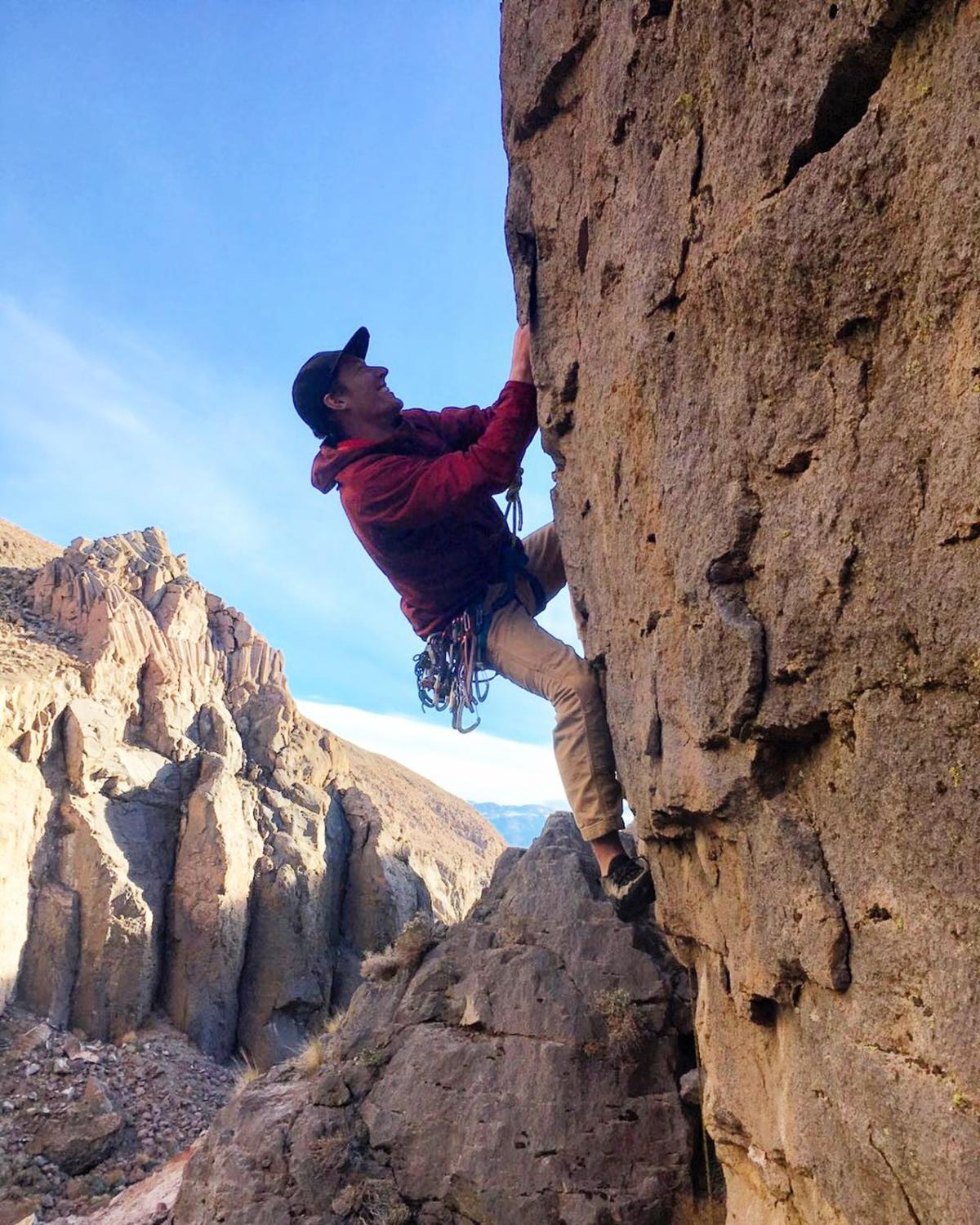 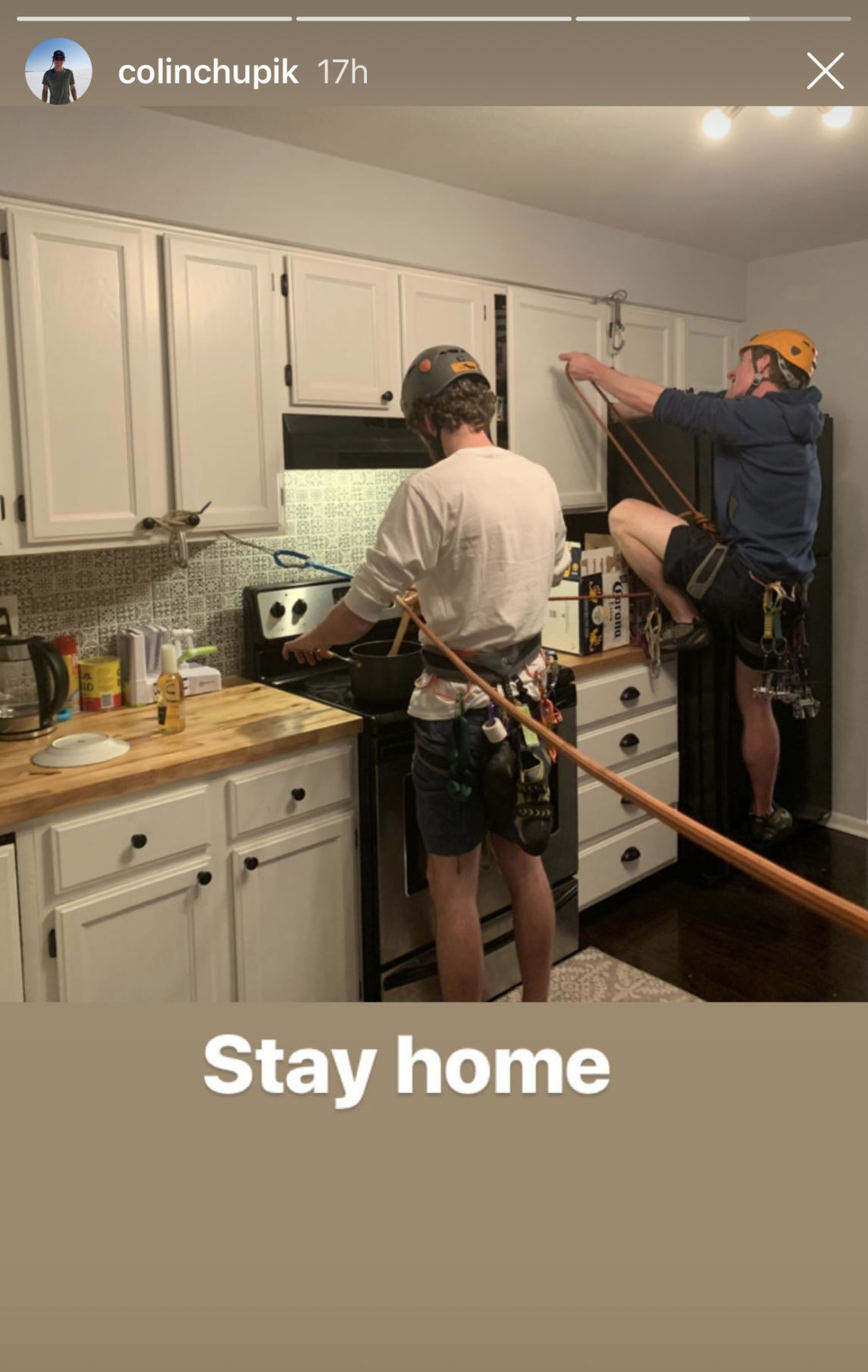 Colin Chupik shared a video of himself climbing in his kitchen with the caption: “Stay home.”

Roommates Daniel Morris, left, and Colin Chupik take to climbing in their kitchen.

Colin Chupik shared a video of himself climbing in his kitchen with the caption: “Stay home.”

Colin Chupik once spent a month living out of his car in Moab, Utah, for the sole purpose of scaling rocks in Indian Creek Canyon.

Recently, though, the Golden man found himself clipped to a coat rack reaching for the top of his refrigerator. Don’t worry, he had a helmet on.

The kitchen climb happened on another night of being stuck inside due to the coronavirus pandemic. Chupik and his roommates needed a break from playing board games.

“I’m an outdoorsy person,” the 26-year-old earthquake geologist said. “I obsess over rocks and I like to climb them too.”

Chupik got the idea for the indoor climb from Instagram. Specifically, Outside Magazine shared a clip of a climber, equipped with full gear, taking to his kitchen as a way to continue his favorite exercise as climbing gyms close and travel is discouraged.

“We saw that and just decided to put on our harnesses,” Chupik said.

The short video shows Daniel Morris belaying Chupik as he clips onto pots and pans and cabinets. You can see an open bottle of beer or two. You can hear laughs from videographer Anna de Soto.

He didn’t cook up much of a workout, but Chupik said “it’s harder than it looks.”

The video, he said, is meant to make you smile.

“The whole coronavirus thing is really serious and sad,” Chupik said. “I thought some lighthearted humor would go a long way.”

“I thought it was ridiculous and funny,” de Soto said. “We thought it was a way to bring a little bit of light to a very weird time for people who want to be outside and be connected to people but can’t really be.”

That little bit of light spread. Hours after City Rock announced it would be temporarily closing, the climbing gym in downtown Colorado Springs shared Chupik’s video and commented, “Keep these coming!” along with a handful of those laughing-face emojis.

Callie Quinlana and her boyfriend, Brandon King, rose to the occasion. The Colorado Springs residents already had a hang board in their home, so King popped up for the video.

It seemed like a good time to share, Quinlana said, “since we are temporarily stopping indoor climbing with this virus.”

Other videos have followed, and she calls the trend “hilarious.”

It’s not just for jokes, though. When he shared a photo on Instagram, Chupik’s caption simply read: “Stay home.”

“We all have to do our part and stay inside and not travel,” he said.

De Soto, who works at REI, said they thought of the video as a way to spread awareness to people, primarily younger folks, to be mindful of how their actions might affect others who are at risk of getting the coronavirus. The message? “Yo, don’t go outside.”

Social media has become a good way to spread that message.

“In a way, Instagram is kind of like the virus,” Chupik said. “If someone shares that video and someone else shares it, more people will see it and think about how important it is to stay home. It’s really an important tool right now.”

Of course, it’s not easy for explorers to be confined by walls.

“The climber community is creative and quirky, but also has a lot of energy,” Quinlana said. “It will be interesting to see how we choose to spend it in the coming weeks without conventional climbing.”

Chupik began climbing as a student at Colorado College. His learning grounds were Garden of the Gods and Red Rocks Open Canyon Space, and he has since traveled across the country for outdoorsy trips.

“Climbing is a really good outlet,” he said. “When you’re up on the wall, you’re not thinking about your problems. It puts you in the moment.”

He’ll miss that, for the near future.

“I feel better about staying home than going to public areas where I could potentially infect someone,” he said.

So he’ll spend his days working from home, face-timing friends and maybe going on a run outside.