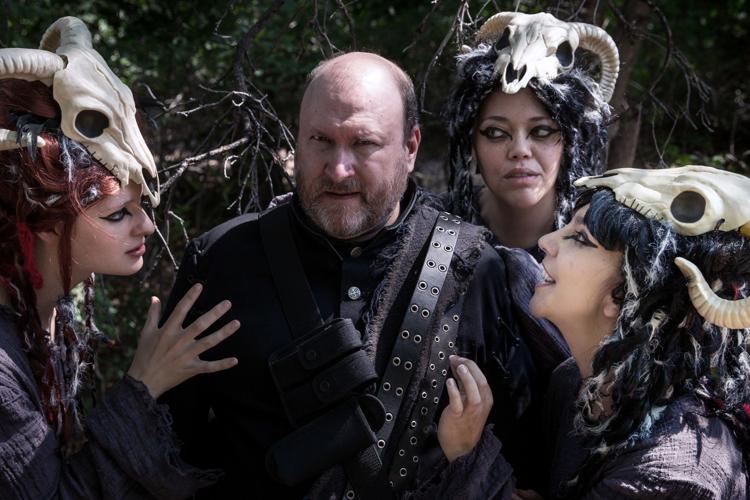 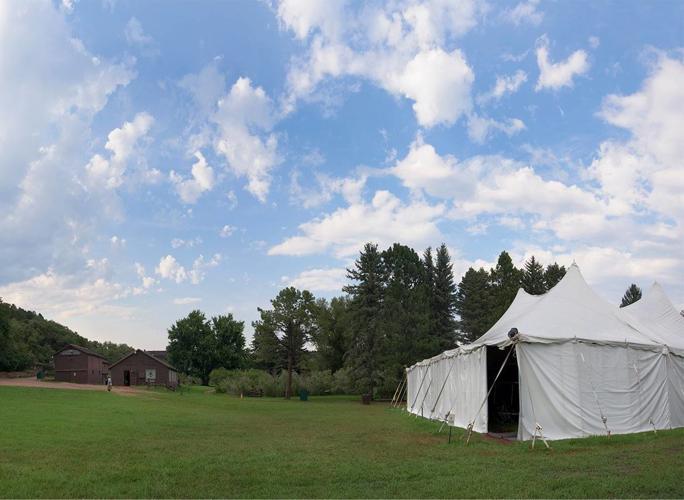 “Macbeth” and “The Complete Works of William Shakespeare (Abridged)” by TheatreWorks will be staged in this large tent at Rock Ledge Ranch Historic Site in Colorado Springs.

“Macbeth” and “The Complete Works of William Shakespeare (Abridged)” by TheatreWorks will be staged in this large tent at Rock Ledge Ranch Historic Site in Colorado Springs.

Tragedy and comedy come together as TheatreWorks brings both “Macbeth” and “The Complete Works of William Shakespeare (Abridged)” to a grand tent at Rock Ledge Ranch Historic Site for the balance of the summer.

Often the Colorado Springs-based professional theater company stages only one play during “Shakespeare at the Ranch,” but this summer theater lovers can see both the bloody “Macbeth” and the comedy that condenses all 37 of The Bard’s plays. The productions share the same set.

“Macbeth” runs Thursday through Aug. 26, and “The Complete Works” runs Aug. 2-25, with the performances alternating.

“I love TheatreWorks’ annual tradition of Shakespeare at the Ranch. It’s this cultural well that folks have access to. It’s theater that celebrates language and asks people to lean forward and listen, to be fully engaged,” said incoming TheatreWorks artistic director Caitlin Lowans, who officially starts her new role Aug. 1. “I love how people make an evening of it, bring a picnic and walk around the grounds of the ranch and create an evening for themselves, to be able to fully respond to the play.”

The Colorado Springs Comic and Toy Con returns this weekend

The Colorado Springs Comic and Toy Con is back. The biannual show, now in its 13th cycle, offers local pop culture fans a chance to congregate…

Jeff Flygare is making his directorial debut at the professional level with “Macbeth.” Serving for 15 years as assistant director with late TheatreWorks artistic director Murray Ross provided ample training. Flygare, who taught English in Academy District 20 for 26 years, directed many productions at Air Academy High School before retiring three years ago to become an educational consultant. The Monument resident started working with TheatreWorks as an actor in the 1980s.

“I did my very first tent show as an actor in 1984 in Shakespeare’s ‘The Comedy of Errors,’” Flygare recalled. “What I know about directing Shakespeare I learned from Murray. I still have the feeling he’s watching over my shoulder. He taught me you have to honor the text, that the actors need to know the text of the play well enough that you bring it across to the audience. In any Shakespeare play the audience will get only 60 percent of the language, even if it’s performed perfectly.”

Flygare directed “Macbeth” once before at the high school level and is excited to bring the tale to the Rock Ledge stage.

“It’s a truly different Shakespeare tragedy — one of his top four. It’s unique because it’s much shorter than the others, and there are no subplots and no long speech (from the title character). It’s clear Shakespeare was trying something new,” he said.

The tragedy by definition doesn’t end well, but the ride is wild and mystical, with scenes in and out of dreams.

As the story goes, Scottish general Macbeth learns from three witches that he will one day become king, so he takes matters into his own hands and murders the current ruler. The twist with the local production is it’s set in 2018. You’ll see armies battling in modern-day fatigues, but with swords for weapons — true to the text.

“While the character of Macbeth is insanely violent, he’s a human being. We can see ourselves in him, but he crosses a line we’d never cross,” Flygare said.

No need to read or reread the play ahead of time, Flygare said. “Go, have a good time and be entertained. Rock Ledge is just gorgeous in the evenings. Come picnic and have a glass of wine.”

Lowans added, “It’s an enormous gift to me coming in, not having had the opportunity to work with Murray Ross. Jeff not only has passion for Shakespeare, but also has this love and tradition with Murray that I wouldn’t otherwise have experienced.”

5 Colorado festivals not to miss this weekend

Here are five festivals happening in Colorado this weekend that you really don't want to miss.