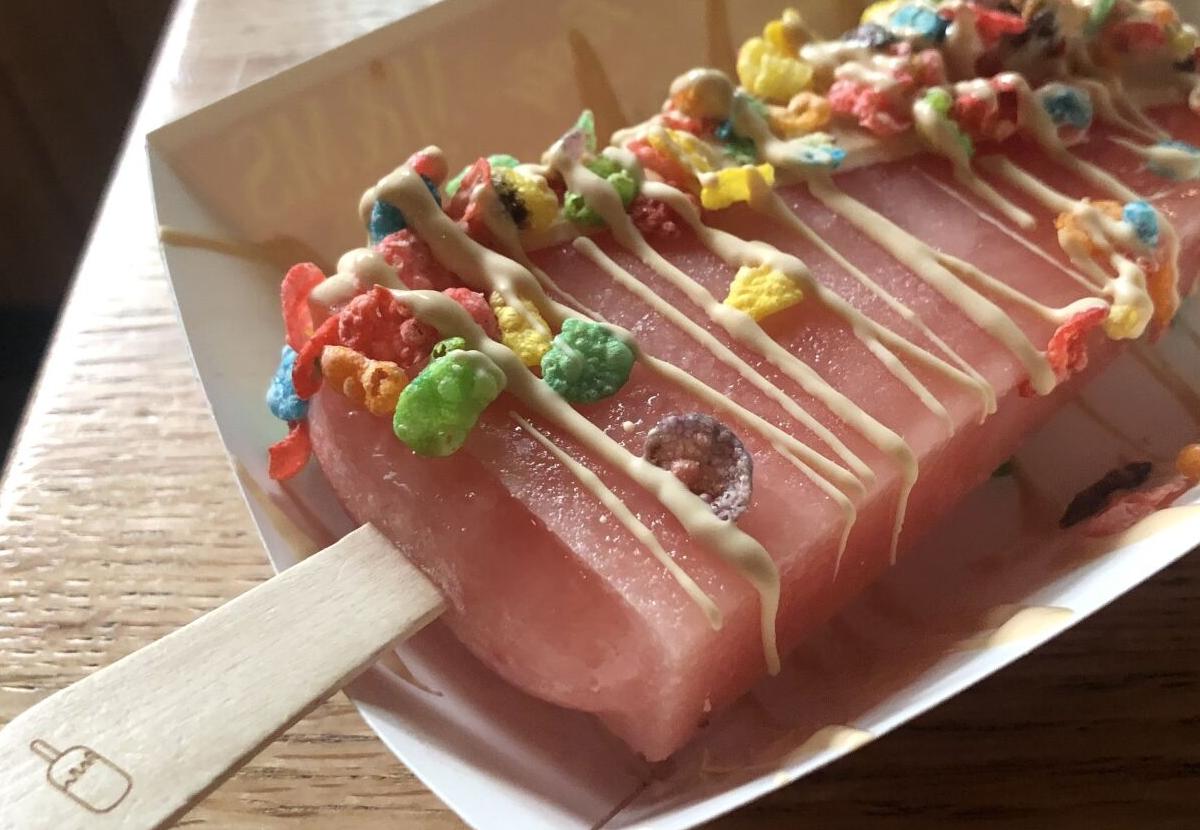 A watermelon paleta from the Paleta Bar, topped with white chocolate and fruity cereal (Lisa Walton, The Gazette). 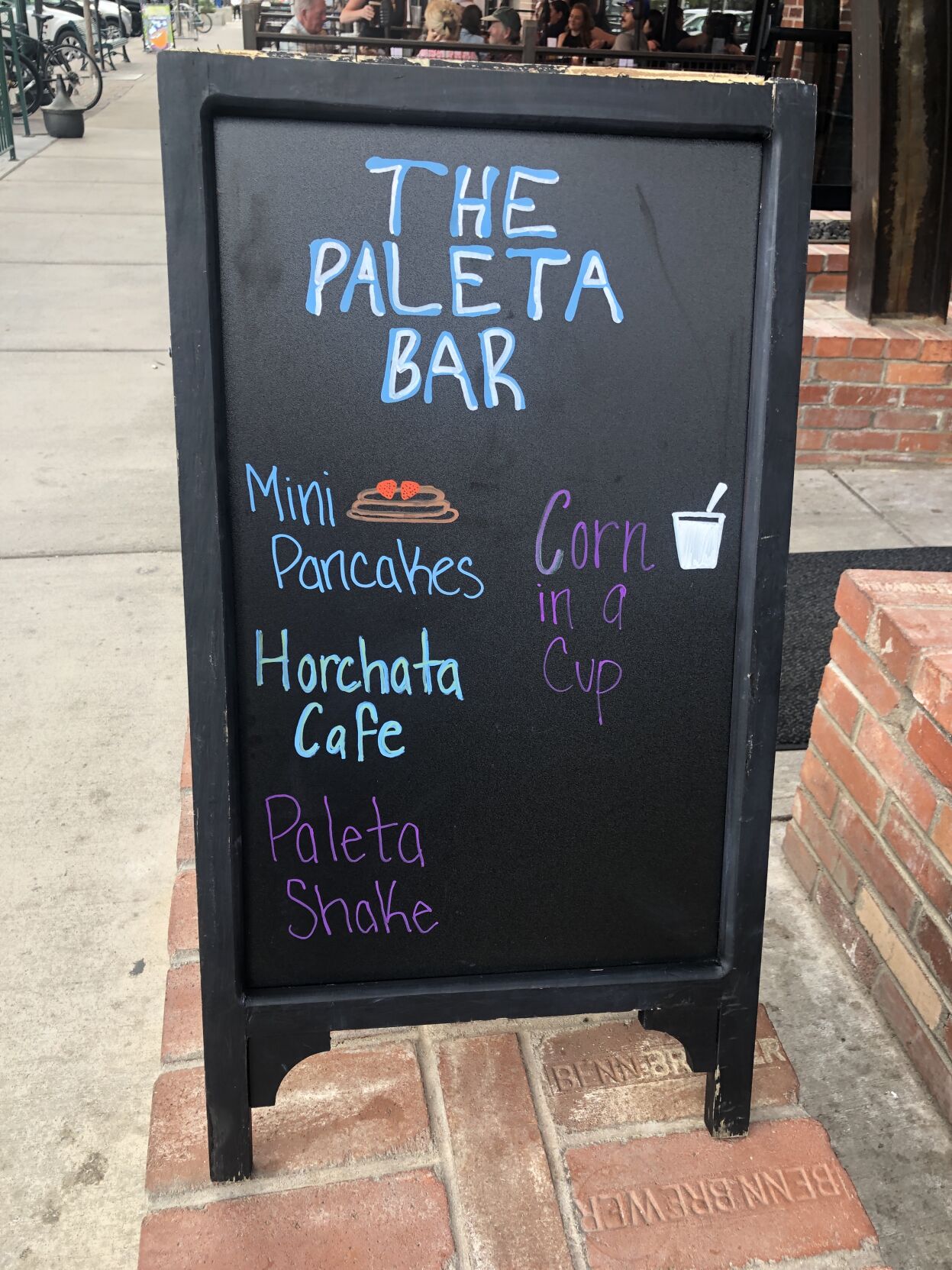 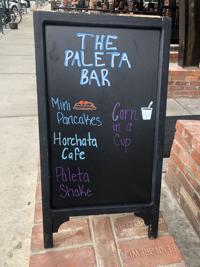 The Paleta Bar is open daily inside CO.A.T.I. in downtown Colorado Springs.

A watermelon paleta from the Paleta Bar, topped with white chocolate and fruity cereal (Lisa Walton, The Gazette).

The Paleta Bar is open daily inside CO.A.T.I. in downtown Colorado Springs.

Forget the picture you have of popsicles from a neighborhood ice cream cream truck. Or from the aisles at the grocery store.

There’s a new type of popsicle in town.

You could get a coconut one covered in pistachios, drizzled with white chocolate and chunks of pineapple. Or one that tastes like an Almond Joy. Or one made into a milkshake and served in a cup that looks like a lightbulb.

At the Paleta Bar, the choice is yours. And you have many choices, each described as gourmet, fresh and made-to-order.

The newest stand inside CO.A.T.I., the multipurpose food hall and entertainment space in downtown Colorado Springs, serves all kinds of picturesque paletas, Spanish for ice pops. It opened in July, the latest from a chain that launched four years ago in Albuquerque, New Mexico and now has more than 20 locations ranging from California to Florida.

The franchise has expanded quickly, perhaps with some help from a 2018 post on Facebook that now has more than 18 million views.

Daniel Casas and his girlfriend, Sadaf Khan, moved here from Albuquerque to open Colorado’s first Paleta Bar. The couple plans to open another location on North Academy Boulevard in early 2022. Another Colorado Springs location, owned by a friend of theirs, should open later this year, Casas said.

Colorado Springs seems to really be warming up to these paletas. That happened to the local owners, who were quick fans of the first Paleta Bar.

Casas, a 23-year-old Nevada native, grew up familiar with little paleterias serving simple pops for a dollar. They were treats for after church or dinner.

Upon his first visit to the Paleta Bar, which brings a modern twist to those small shops, he thought, “Wow, this is really unique.”

Khan was drawn to paleta made with chocolate-covered strawberries, which became a nightly craving.

So she understands how the Paleta Bar on Tejon Street has gained regulars so quickly. Families come every Sunday afternoon. One guy stops in for a strawberry smoothie every morning. Kids get that “jaw drop” look on their face.

“It reminds me of being a 5-year-old in a candy store,” Khan said. “You can make whatever you want.”

For the paletas, customers are instructed to follow four steps. First, choose from 17 or so flavors for a paleta. Options range from cookies and cream to avocado to mango. Next, cover your paleta with a chocolate (white, milk or dark) dipping. You also have the option to get it fully-dipped or half-dipped or dusted with powdered chile and chamoy.

Next comes the toppings, ranging from cocoa pebbles to sprinkles to chili powder, and a pairing of fresh fruit, like watermelon or bananas.

As you order, you’ll see your masterpiece being made with fresh ingredients and popsicles that Casas promises are never left frozen for more than a day.

As he says, “it’s not your typical ice cream place.”

And the menu goes beyond popsicles. Offerings include coffees, smoothies, shakes, mini pancakes, elote (or Mexican corn) in a cup, fresh fruit water known as aguas frescas and a plate of Mexican nachos called Dorinachos.

The Paleta Bar serves plenty of anytime treats, which is why the stand opens at 10 a.m. daily and closes at 10 p.m. or 11 p.m., depending on the day. Khan says it’s a good fit for CO.A.T.I., which has multiple food vendors and events keeping people coming throughout the day.

“The paletas really get attention here,” she said. “People walk by and say, ‘Where’d you get that?’”

The Colorado Springs of today is far removed from its 1990s self, when Ormao Dance Company first appeared on the scene.