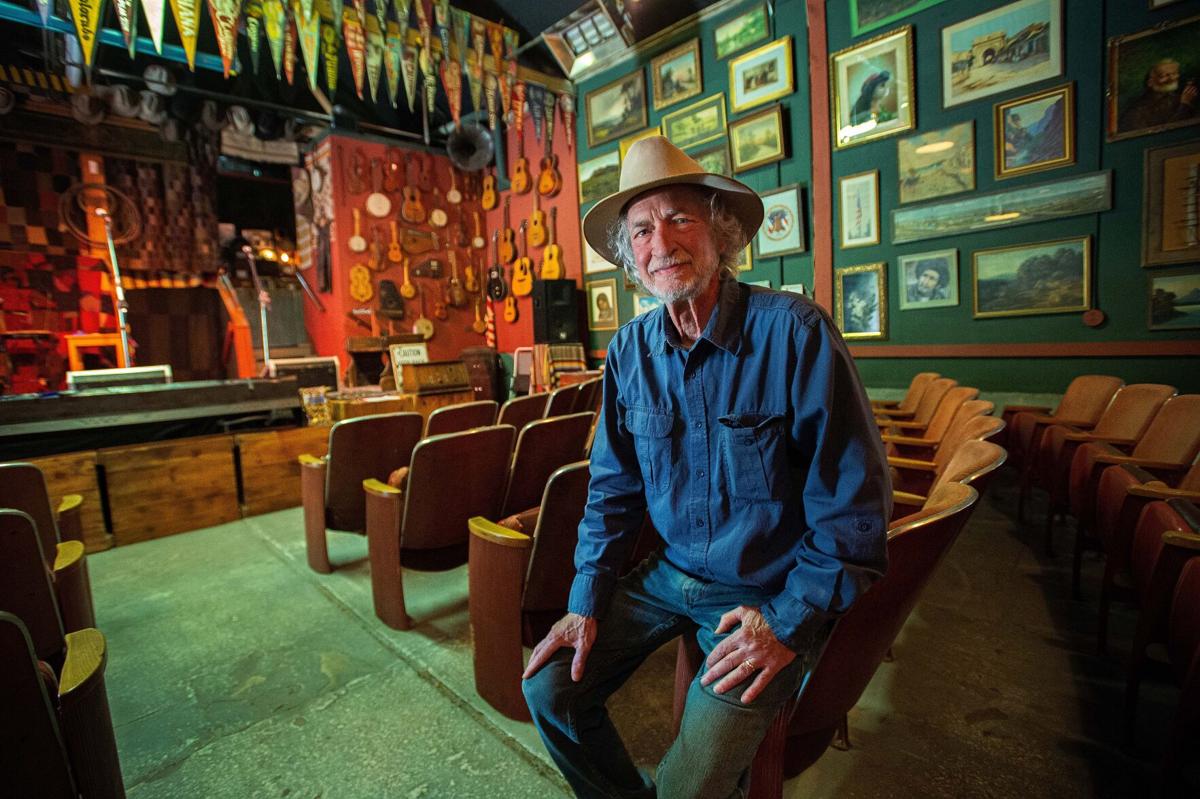 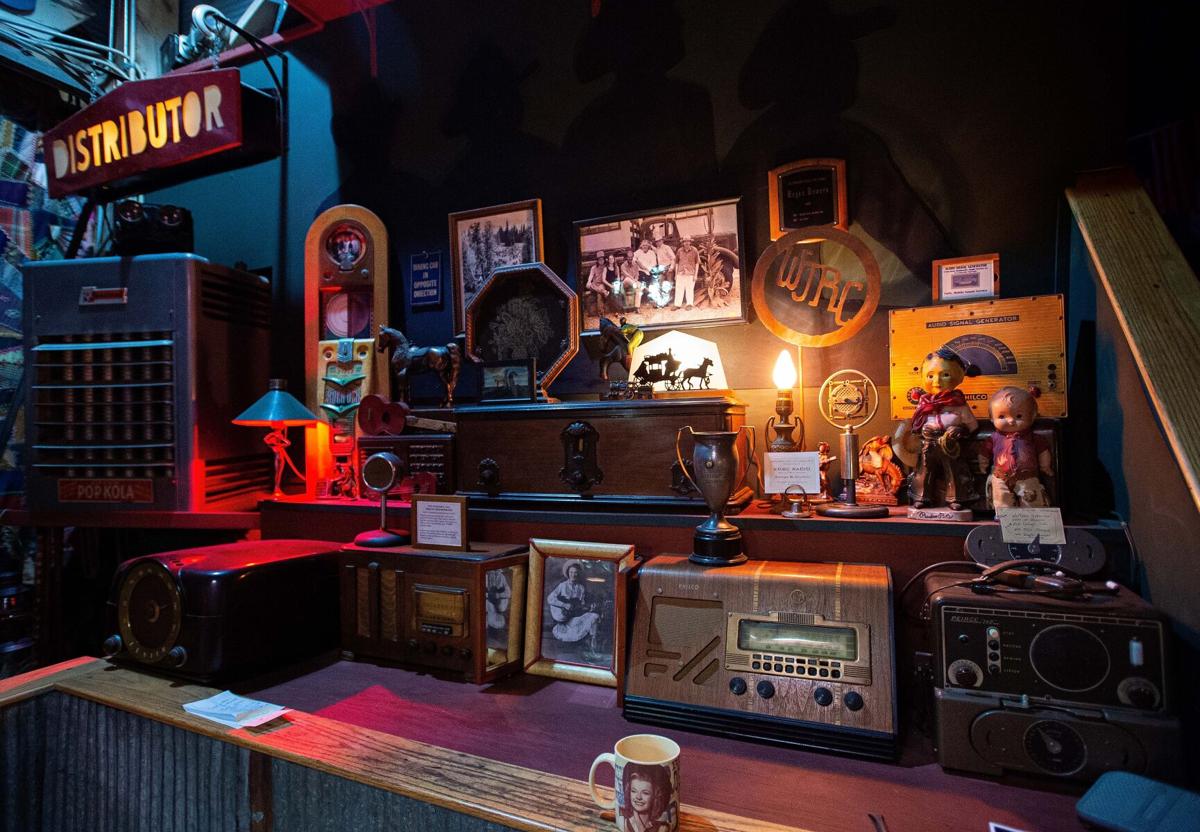 Antiques fill the walls of the Western Jubilee’s Warehouse Theater. 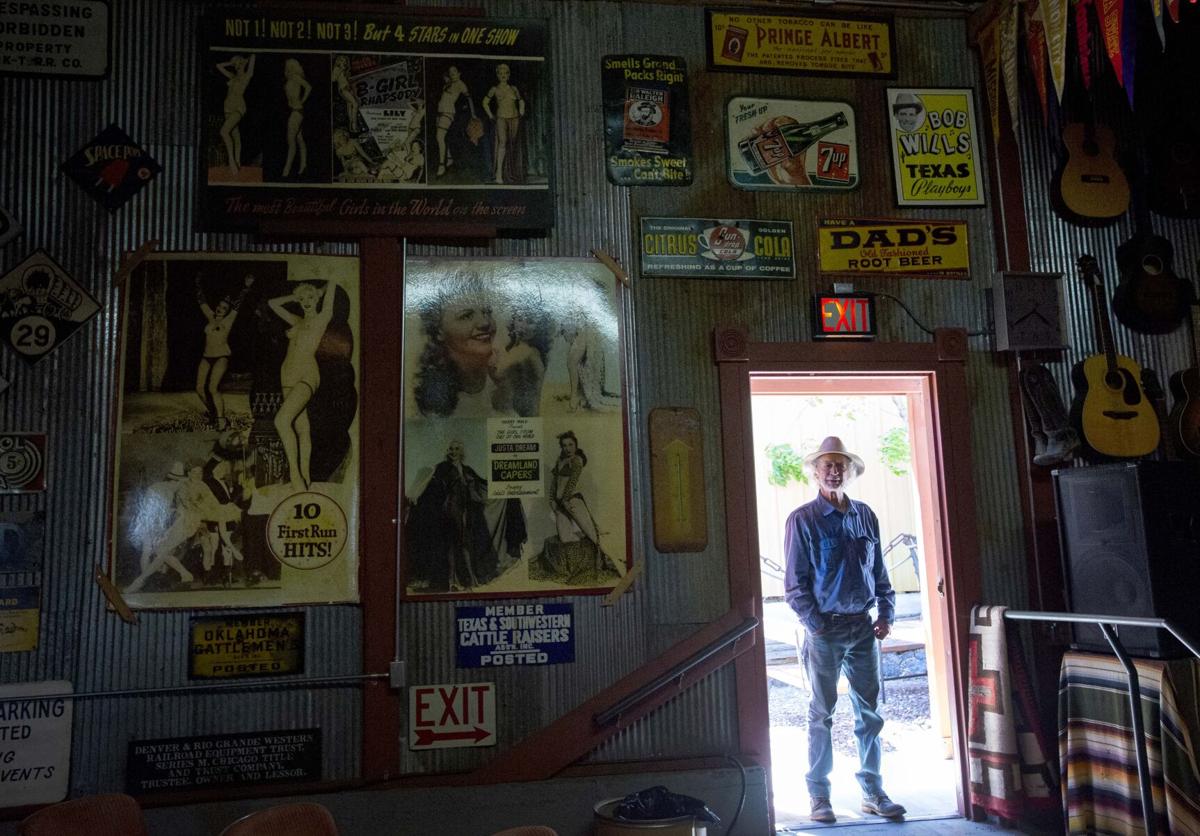 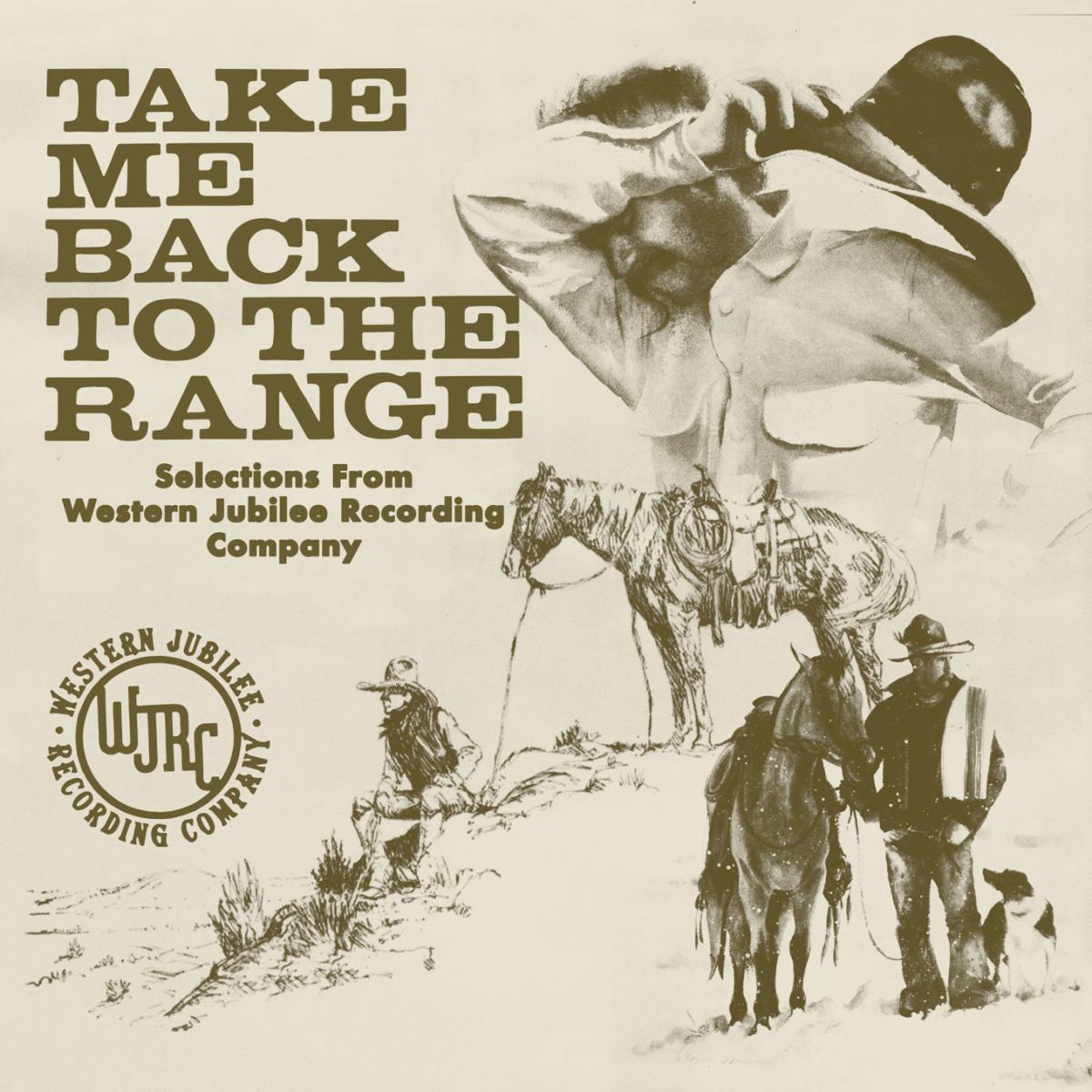 Smithsonian Folkways recently put out a digital collection of songs from Western Jubilee’s catalogue called “Take Me Back to the Range.” 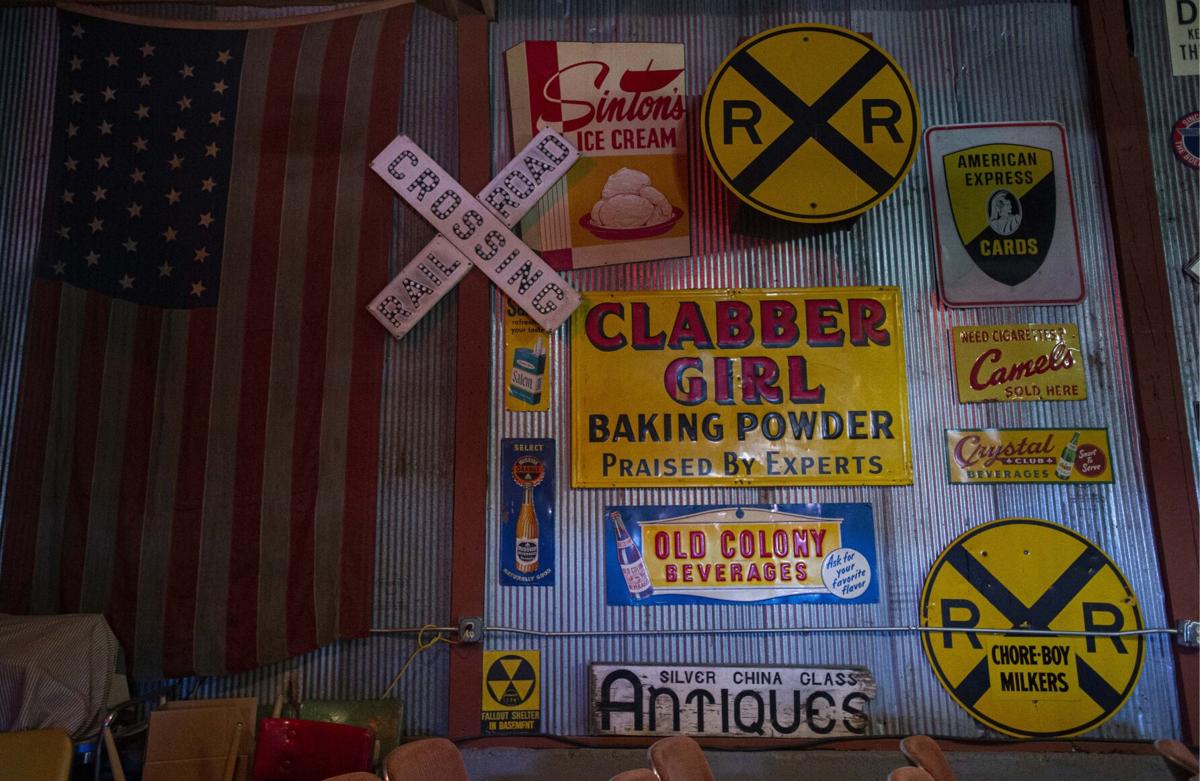 Old signs and an American flag cover the walls of the Warehouse Theater at the Western Jubilee Recording Co. in Colorado Springs.

Antiques fill the walls of the Western Jubilee’s Warehouse Theater.

Smithsonian Folkways recently put out a digital collection of songs from Western Jubilee’s catalogue called “Take Me Back to the Range.”

Old signs and an American flag cover the walls of the Warehouse Theater at the Western Jubilee Recording Co. in Colorado Springs.

Scott O’Malley did just about everything backwards.

When he was in a band, he hated every agent he ever met. So he became an agent. When it was time to open his own office in 1996, he bought the worst building in a bad part of town by the train tracks. He liked it because of the train tracks and maybe even because it was a dump. O’Malley says you could see the front door from the back door.

He fixed the warehouse up, but kept “warehouse” as part of the business name. O’Malley thought of it like that familiar line from “Field of Dreams.” If he built it, people would come and people would listen. Even that’s a little backwards, too.

Back then, people thought he was crazy.

Today so many people, even lifelong Colorado Springs residents, have never been to Scott O’Malley’s place, which doubles as a recording studio and concert venue, even though it’s right downtown. A lot of people have never heard of Western Jubilee Warehouse. When somebody’s coming by for the first time, O’Malley asks, “Do you know where we are?”

Meet the 'hat master,' the Colorado cowboy behind the scenes of Western glory

There’s no missing it after you pass the “No Outlet” road sign on Cucharras. The wooden front looks like it belongs in a Western movie, probably like one O’Malley watched when he was a kid.

He didn’t sign a whole lot of artists, but the ones he did were cowboy Western guys, which he calls “less-is-more kind of music.”

This music tells tales about cowboys whose faces are burnt by the sun, who spend their time listening to coyotes howl, who are always coming and going and who are too tough to say someone’s their best friend. These songs feel like they’re from long ago, even though most were written in the last few decades. Their lyrics often long for the simpler life and talk about the rain or the cold or the sunshine. You’ll hear yodels and gibberish like “hoo yip hoo yip hoo” and all about cowboy life, the good and bad.

According to one songwriter and Western Jubilee artist, Don Edwards, “a cowboy’s life is a dreary thing.” Edwards also says a cowboy is “Just chasing what he really loves, what’s burnin’ in his soul, wishin’ to hell that he’d been born, a hundred years ago.”

“Yes, we live in a time warp,” Edwards said in a PBS minidocumentary about Western Jubilee. “I’m just fascinated by the history of it.”

To get this kind of music, O’Malley suggests, you have to hear it.

That’s what cowboy poet and O’Malley client Waddie Mitchell was getting at when he described the recording company in a 2009 commercial.

“We’re the newest recorders of the old kind of music,” he says in the video. “I mean it’s just being recorded now, but it’s old type of music, you know, where … just listen. You’ll hear what I’m talking about.”

Since a newspaper story can’t play it for you, here’s a snippet from a popular Mitchell poem, called “No Quit Attitude.” Just picture a guy with a handlebar mustache, sometimes a guitar and always, of course, a cowboy hat, delivering these words: “And that ‘no quit’ phrase speaks volumes on one’s character and makin’s.... Those who have it, you’ll find, usually conquer most their undertakin’s.”

“Cowboy music can be most anything,” O’Malley said in the PBS documentary. “It doesn’t have to be just about coyotes or horses and the range. But it’s not country music the way we know it today. In fact, it’s very contrary to that.”

To describe this music as a throwback is an understatement. And O’Malley throws it way back with everything at Western Jubilee.

“He did the exact opposite of what you’re supposed to do in the music business,” says his son, Tyler, who also works at Western Jubilee. “He made sure nothing was too current or popular.”

When they started hosting concerts there, Scott O’Malley sort of kept those a secret. You’d only find yourself at a show here if you joined the mailing list, usually by physically writing your name on a sheet of paper. He used to send out invitations on large postcards, but he’s upgraded to sending emails.

And once you get here? “People ask, ‘What the hell is this place?” Tyler O’Malley said.

The 9 drive-in theaters to celebrate in Colorado

The stage is covered in old quilts and rugs. Dozens of guitars, banjos and other strings serve as the backdrop. Dozens of vintage pennants hang from the ceiling. From the dusty theater seats, you can see some of Scott O’Malley’s prized collections — old signs for cigarettes and sodas and garage sale paintings — lining the walls.

What the hell is this? It’s what O’Malley wants it to be.

He says he never “recorded” or “created” music here. He “captured” music, usually in front of a live audience. He doesn’t call this place a concert hall, but “a labor of love.”

“It’s always just been friends playing with friends,” O’Malley said. “You want it to sound like they really play, like you were there.”

The only difference between a live show and a recording, then? The clapping, O’Malley says with a chuckle.

O’Malley isn’t sure why or how, but music sounds really good coming from his theater. Proof has come over the years. Western Jubilee has earned Grammy nominations and Western Heritage Awards and hosted the best in the genre.

One crazy decision after another and O’Malley has built an iconic place hidden in plain sight.

At least that’s what Smithsonian Folkways Recordings tell him.

A division of the Smithsonian Center for Folklife and Cultural Heritage, the nonprofit label is “dedicated to supporting cultural diversity and increased understanding among people through the documentation, preservation, production and dissemination of sound.”

They’re interested in “people’s music,” and that’s what Western Jubilee’s catalogue — about 50 albums in total — is all about.

“It’s thrilling,” O’Malley says of the deal. “To think they’re interested in this music…. It feels like a pat on the back.”

O’Malley was never really looking for recognition. But about three years ago, he and his family started wondering, “What’s going to happen to this music in 10 years, 20 years?”

Word got to John Smith. He had left Smithsonian Folkways in 2014, but knew the two outfits would fit together. He had heard about Western Jubilee earlier in his career and incidentally became “fascinated by the cowboy poetry genre.”

“It was something quite foreign to me at the time,” Smith said. “But I developed a deep appreciation for it.”

When he came back to Smithsonian Folkways in 2018 as associate director, discussions about acquiring Western Jubilee hadn’t gone anywhere. So Smith put it on the top of his list.

He came out to Colorado Springs about six months later to dig into the collection. The deal was done by the end of 2019, thanks to Smith.

“I’m so happy to have Smithsonian Folkways be the new home of Western Jubilee Recording Co.,” he said. “It’s an honor to be a part of continuing on Scott O’Malley’s vision of bringing the best of cowboy and Western music and poetry to the masses.”

O’Malley’s list of clients include internationally known country-western singer Edwards, who has two songs in the Folklore Archives of the Library of Congress, Mitchell, the cowboy poet, and guitarist Norman Blake, who won a Grammy for his music in the Coen brothers’ 2000 film “O Brother, Where Art Thou?”

O’Malley calls Blake his hero. “You know,” O’Malley says. “He’s proud to be a hillbilly.”

Maybe that’s all O’Malley ever wanted to do here: Show that you should be proud to be a hillbilly. Or just proud of who you are.

O’Malley is proud of who he is and what he’s built. He’s from a little town in Indiana called Cambridge City. He grew up collecting baseball cards and watching cowboys like Roy Rogers and Hopalong Cassidy on a black-and-white TV. There weren’t many real cowboys there, but O’Malley dreamed of being one.

“I’ve got that disease and I always have,” O’Malley says in the PBS doc. “It’s kind of ‘the older is better’ attitude.”

These days, he always wears a cowboy hat and blue jeans. His collection grew way beyond baseball cards. He’s often at his desk, covered with papers, ready to answer the phone if it rings.

But he’s always up for showing off his collection of signs, like a big one outside that says, “The People of Indiana Welcome You.”

“You can hang most anything on a tin wall and it looks good, you know,” O’Malley is known to say about his signs.

The stories about his collectables come while O’Malley walks around the warehouse or while he steps outside with a cigarette.

He says he has trouble explaining what he does to his wife as much as a total stranger. He just knows it revolves around the music.

With the acquisition in place, Smithsonian Folkways will take over the day-to-day operations of the record label O’Malley built.

The recordings, formerly on CDs, will be digitized. Smith, of Smithsonian Folkways, pledges to keep the collection “available in perpetuity through as many ways as possible.”

Translation: They’ll be kept safe, no matter what happens to the old warehouse or its owners.

“When we are all gone, that music will still be available,” Tyler O’Malley said.

“(My dad) did this to save the music. That’s always been what’s important to him.”

The deal also means Scott O’Malley can retire if he wants to.

Does he, though? He doesn’t answer that question.

That idea sounds too crazy to him right now.

PARKER • Silas Musick would not be accepting a new lawnmower for Father’s Day.

What to expect from the star-studded Vax Live fundraiser