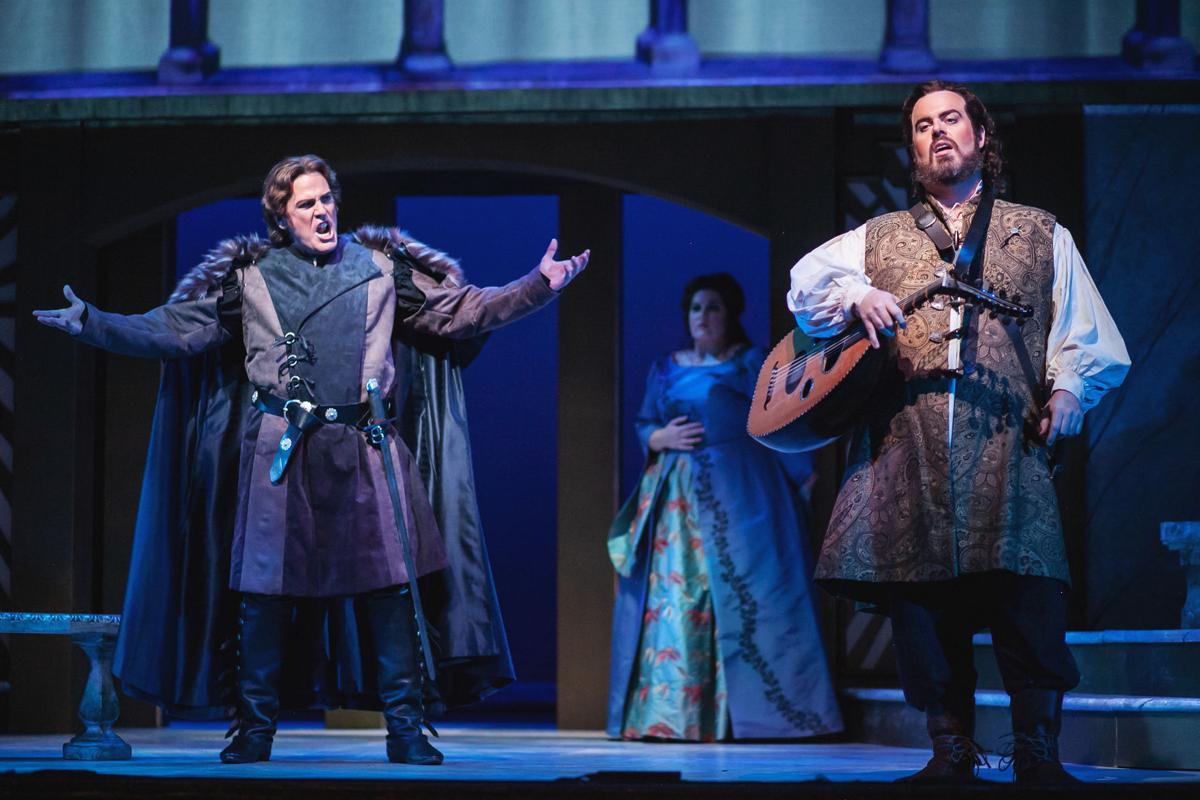 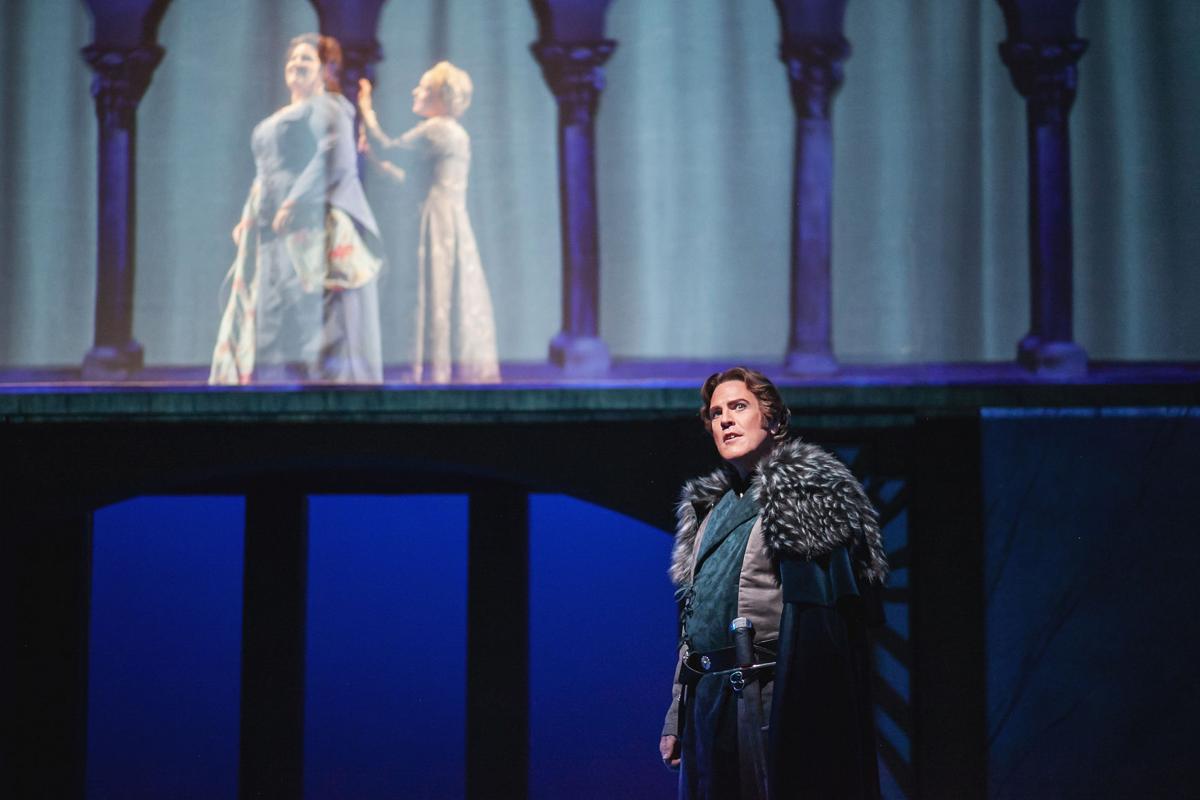 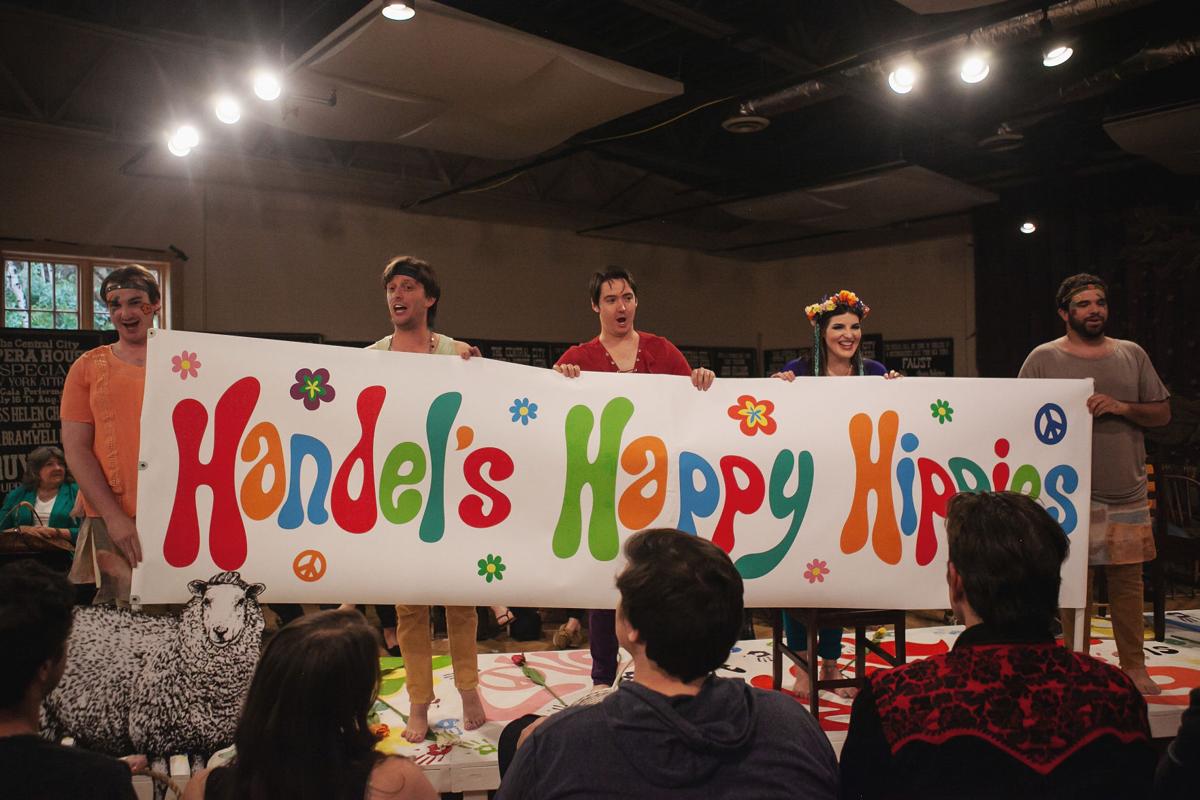 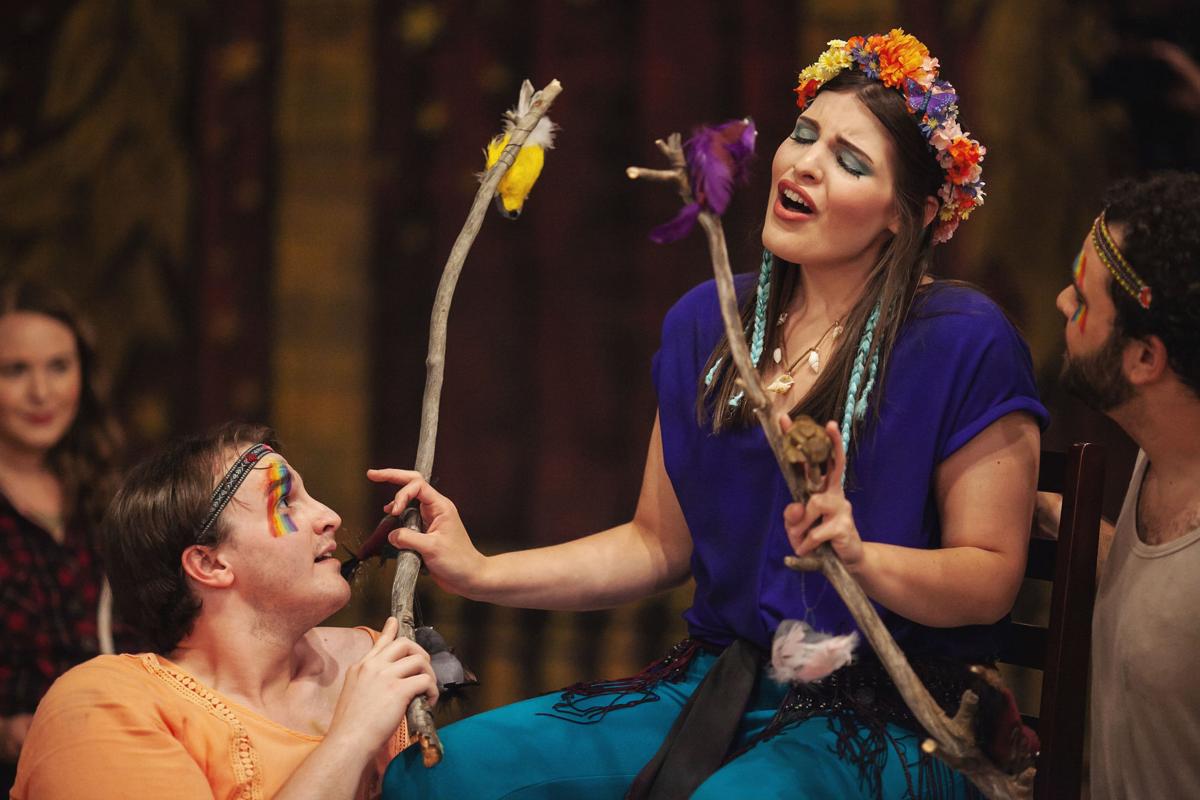 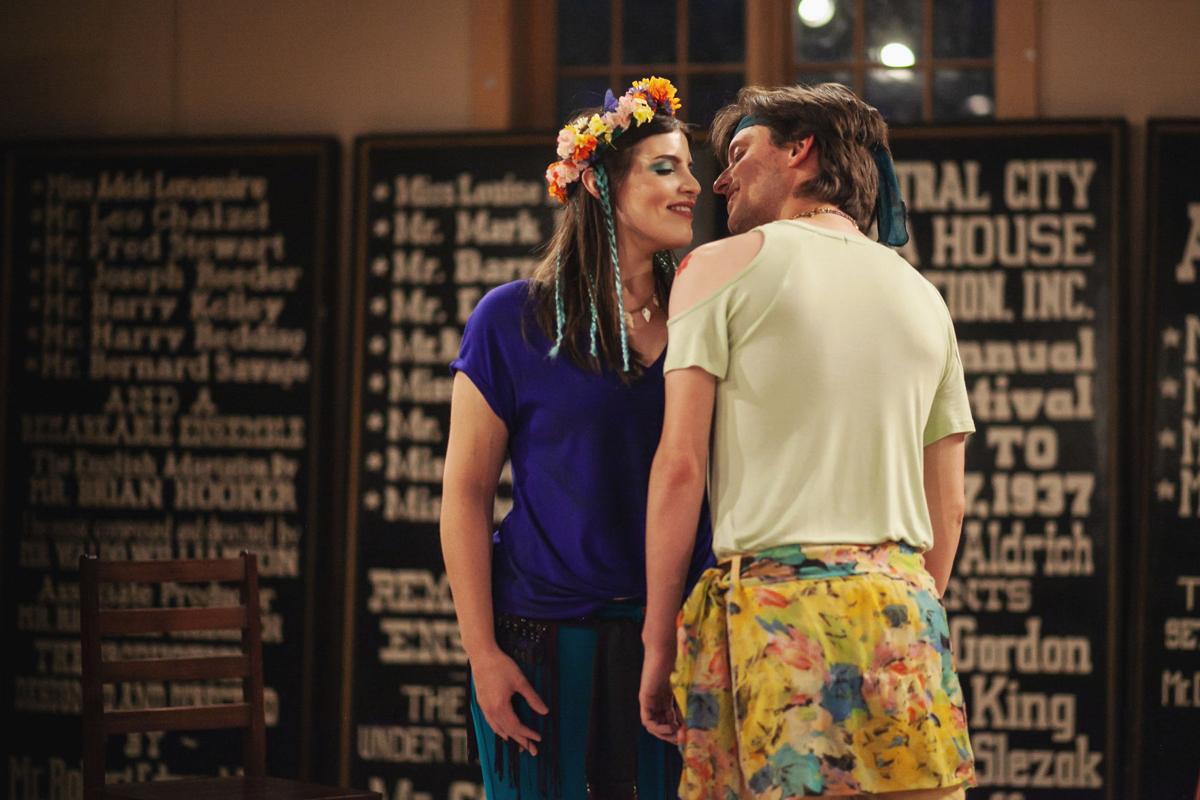 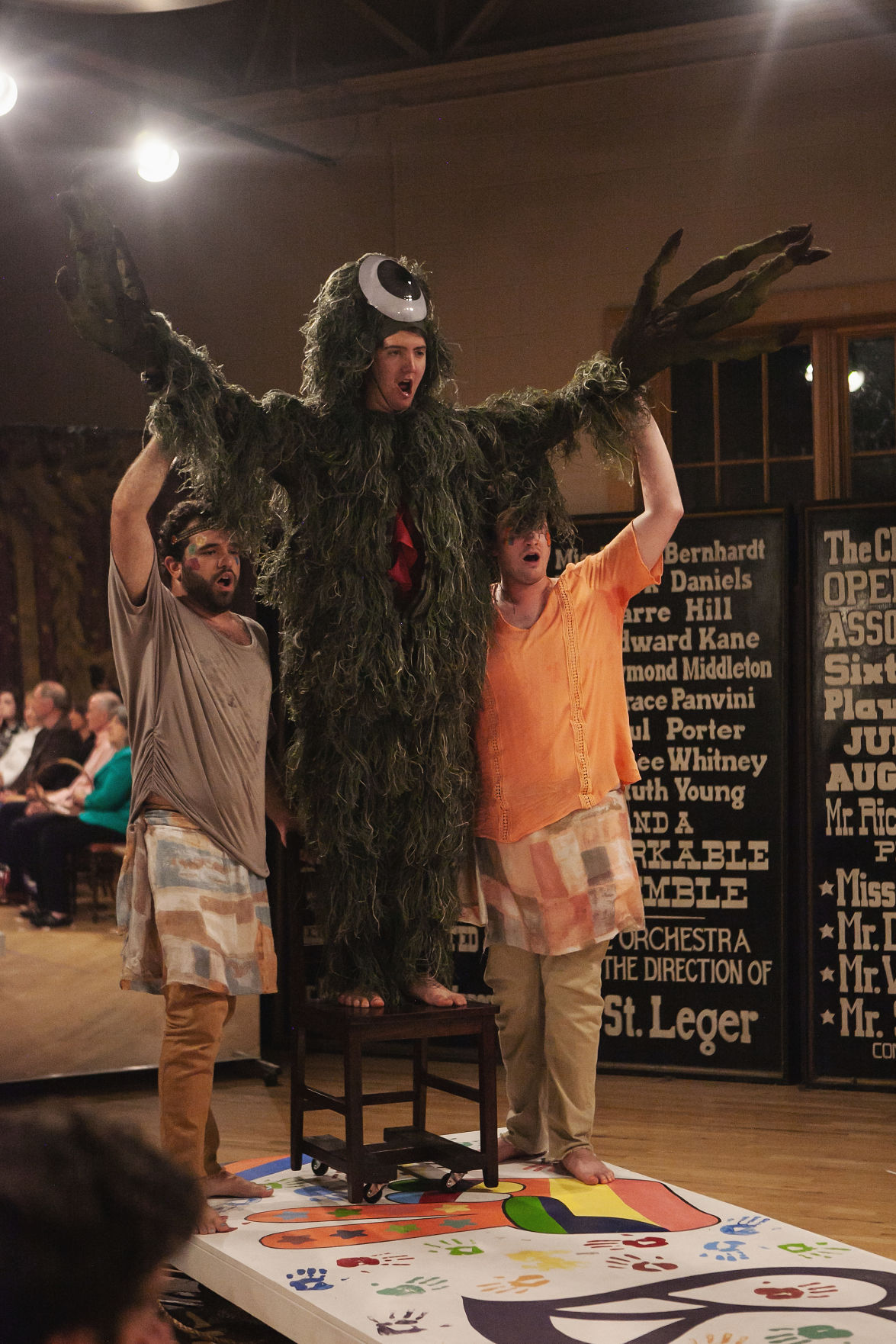 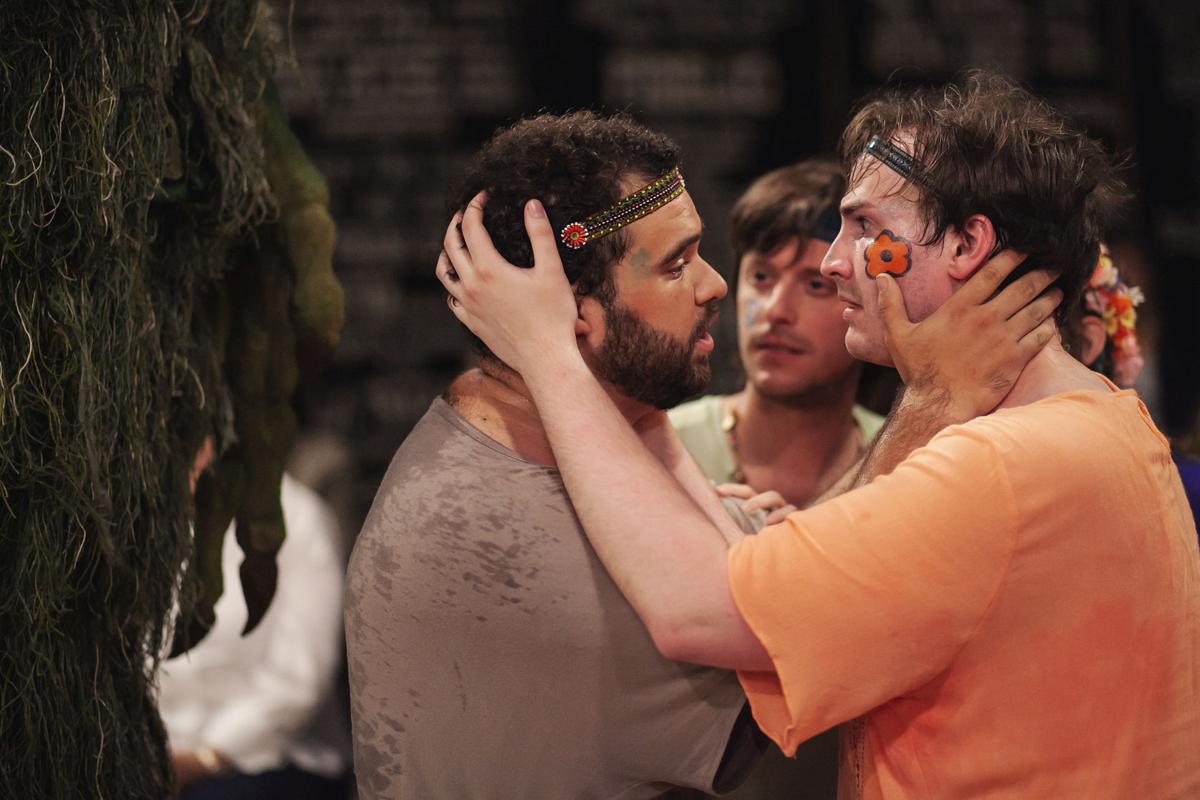 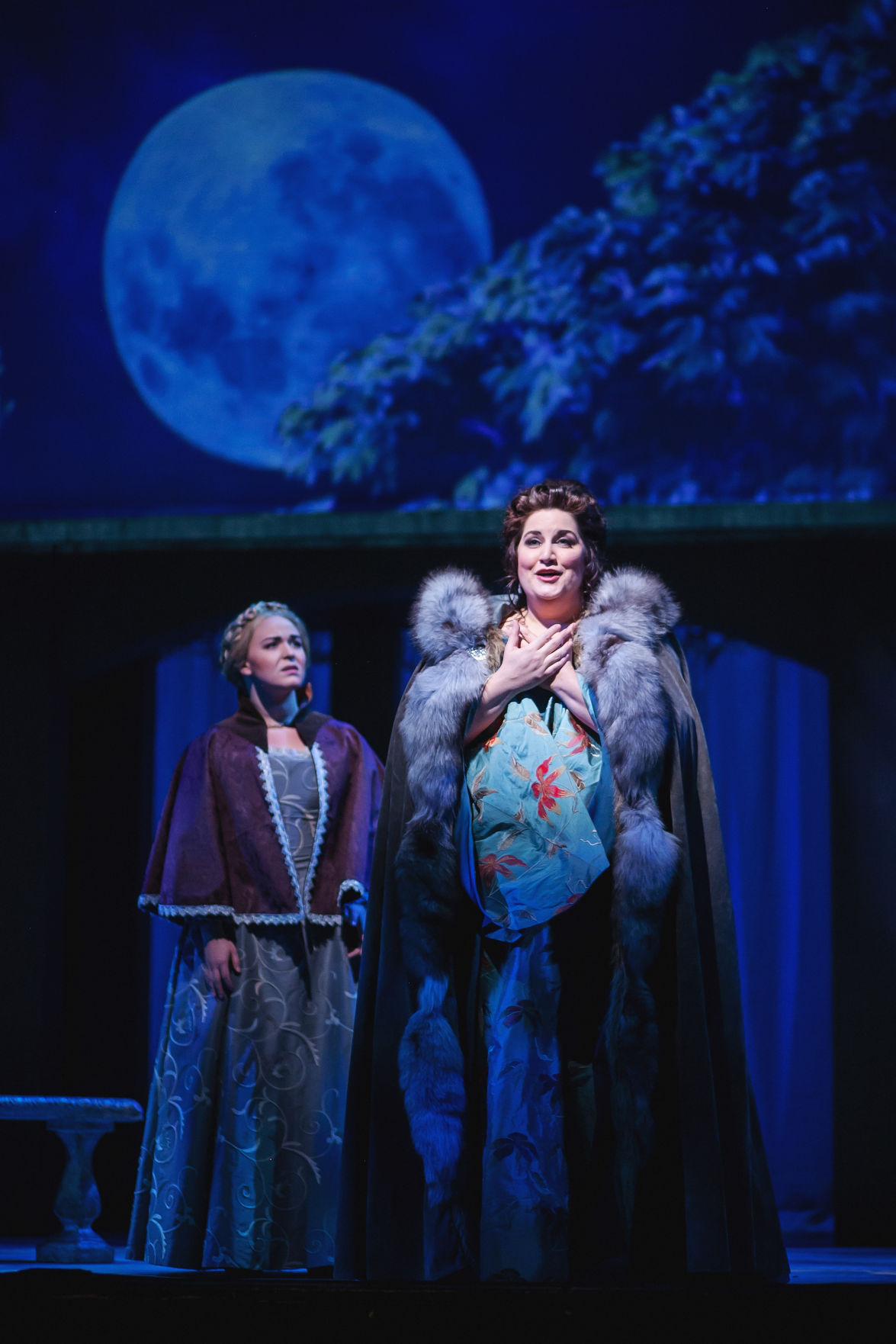 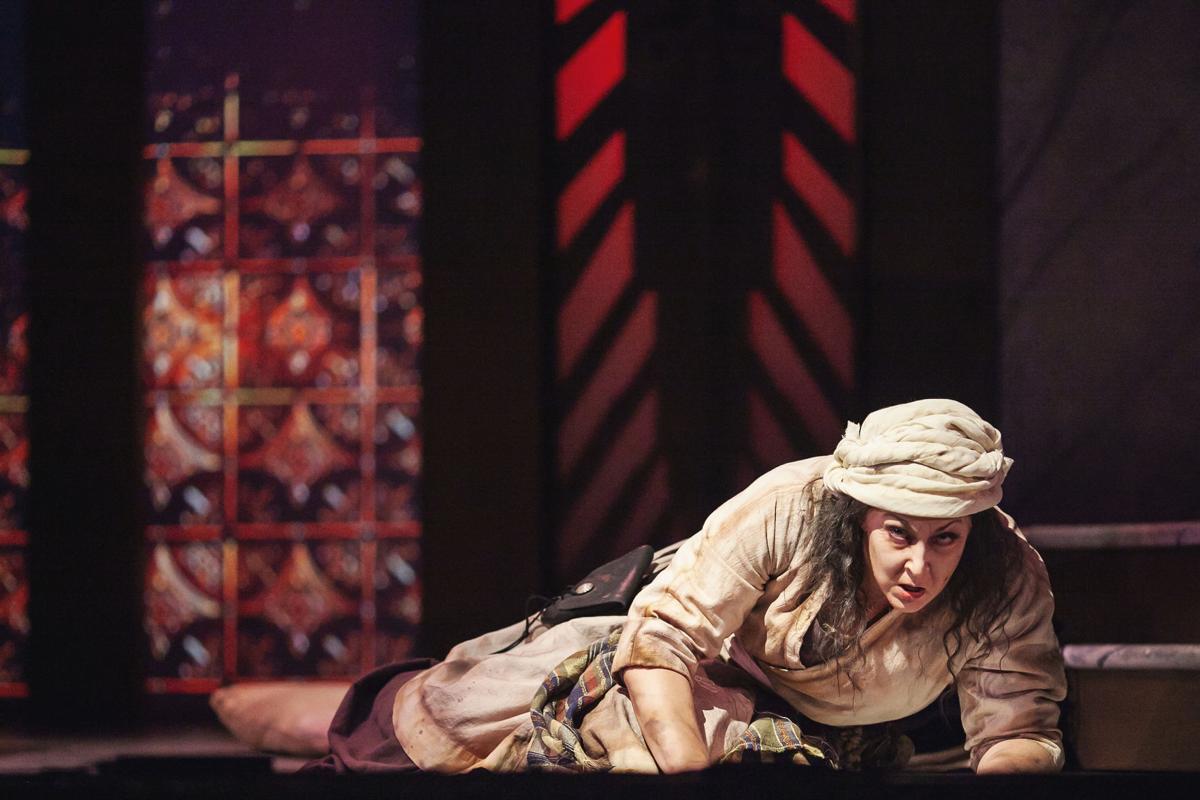 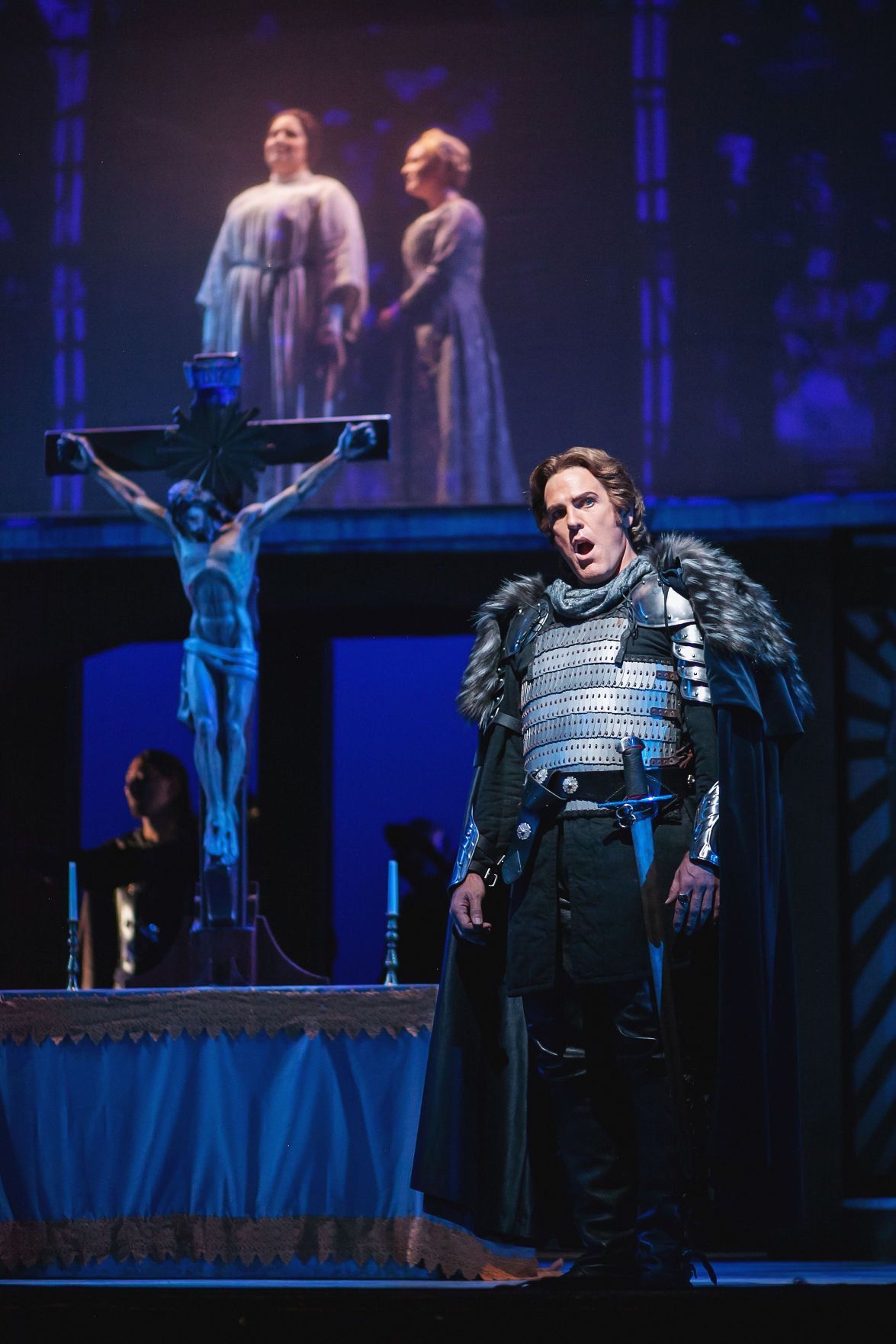 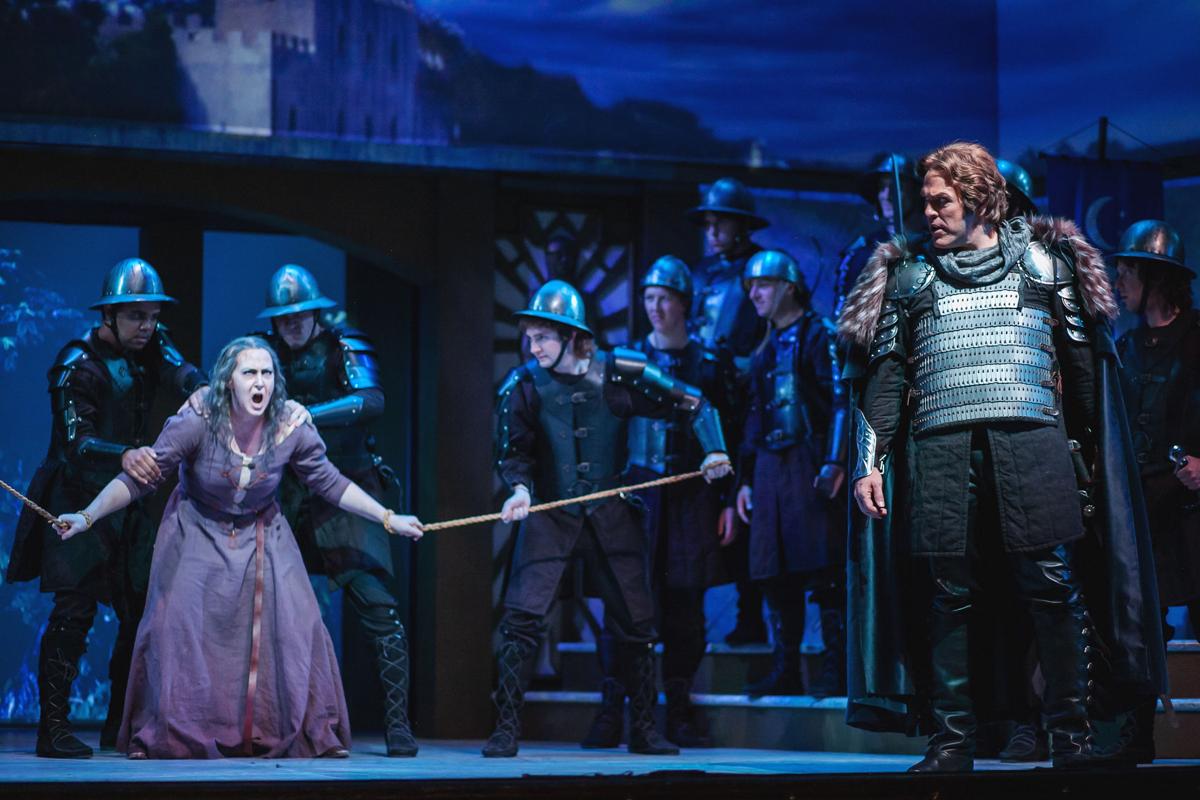 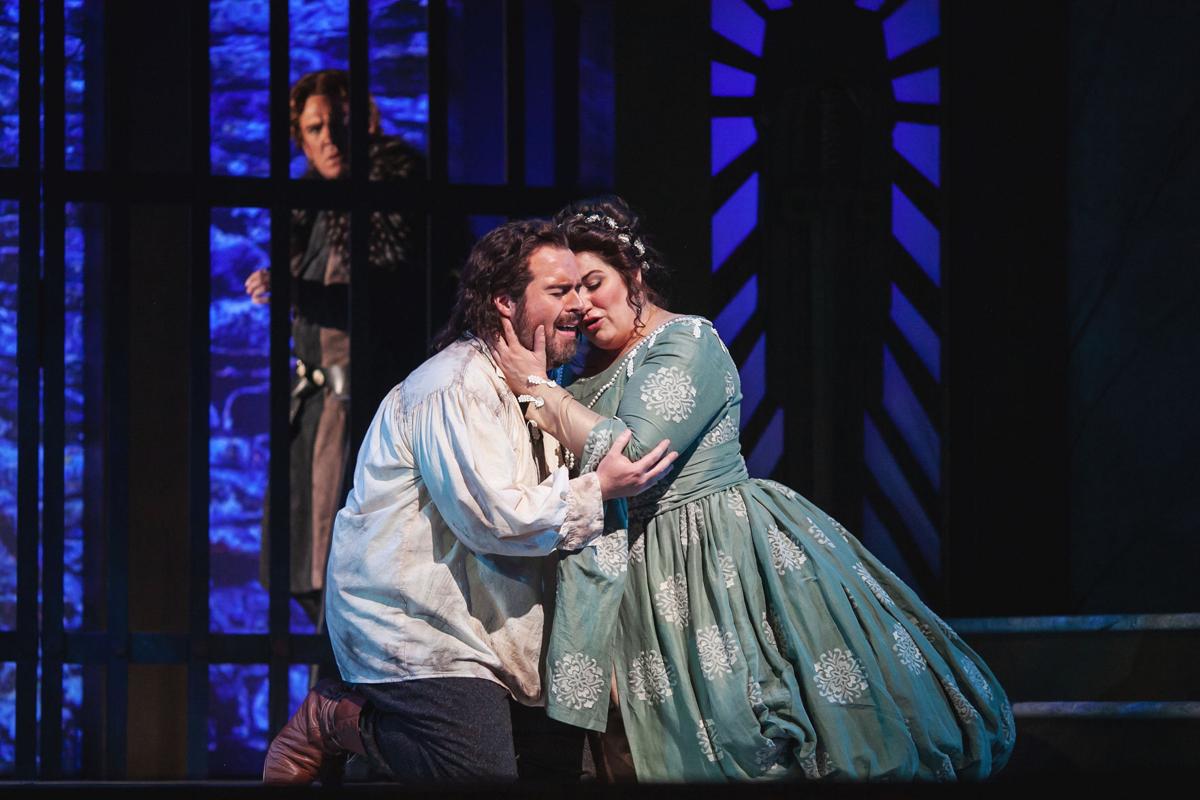 Jealousy and passion cause a monstrous beast to destroy a great romance is the same basic storyline of the two operas offered by the Central City Opera on July 26.

Apart from this, these two productions could hardly have been more disparate in their approach to the art form.

Handel’s "Acis and Galatea," on stage through Aug. 1, was moved up the hill from Central City’s historic opera house into Martin Foundry. The performing space had no specific theatrical lighting or stage. For this production, the audience was seated on either side of a long elevated runway decorated with colorful images inspired by the 1960s flower power movement. The 12-piece chamber orchestra, conducted brilliantly from the harpsichord by Christopher Zemliauskas, was placed in a corner of the room.

As the orchestra rang out the opening Sinfonia in authentic Baroque style, our five “players” burst onto the scene — dressed and made up as peace-loving hippies from the 60s — far afield from the work’s original mythological setting and without any cues from its first performance in 1718.

No nationally-renowned performers here: all soloists are members of the company’s Studio Artists roster. After all, as the fertile imagination of stage director Ken Cazan would have it, at the Sinfonia’s end they unfurled a banner declaring themselves as “Handel’s Happy Hippies” and we were ready to go.

No doubt through a combination of improvisational and structured processes, the troupe produced an effervescent, high energy and passionate theatrical presence that included the audience in the action. Each were polished vocalists with a youthful ardor making this tale of unbridled love, joy and jealousy all the more easy to join.

In fact, everyone involved in this production totally bought in to Cazan’s inspired resetting of Handel’s masterpiece: Stacie Logue’s costumes were colorful, flexible and creative; Ronell Oliveri’s makeup was period perfection; and the orchestra was obviously delighted to be a part of such wonderful and innovative art.

An ah, the music — so many beautiful melodies and affecting harmonies. Many productions have used separate choruses to assist the principals, but here, the ensemble sang it all, guaranteeing the intimacy of the event was never compromised.

I think all of the cast have bright futures: Graycen Gardner as Galatea had a beautifully lyric heartfelt soprano; George Milosh as Acis had a tenor with an easy and appealing quality; Chris Mosz’s tenor overwhelmed with purity and passion as Damon; Benjamin DaCosta-Kaufman’s tenor was organically connected to the gentle emotions of his Corydon; and baritone Matthew Peterson’s performance as the murderous cyclops Polyphemus was the most stunning of all as he sang with power and beauty while being transformed into the monster before our eyes.

As it has been for millennia, Acis was crushed to death only to be made immortal into a fountain by the sea nymph Galatea. But in this incarnation, the story may have had its most organic and lasting impact.

Only two blocks and a 135 years removed from Handel’s "Acis," Verdi’s "Il trovatore," on stage through Aug. 5, occurred almost as belonging to a different art form. Sweetness and sublimity were superseded by darkness and grand gesture. As impressive as the individual performances were — and these were seasoned world-class voices — the production, for better or for worse, belonged to stage director and scenic/projections designer Joachim Schamberger.

The internationally-renowned Schamberger is known for his “Virtual Theater” approach to conventional opera production which was running in full-throttle in the Central City Opera House. A relatively simple set was embellished by a section above in which various projections, sometimes depicting the setting of trovatore’s specific scenes; sometimes thematically decorating specific moments, were skillfully rendered. Above that ring, Schamberger often utilized a sort of living picture box. Characters and scenes from the story’s past or, what would usually be off stage happenings left to the imagination, were realized with a film-like quality. There were also stage-filling projections between scenes that updated the story in a fashion akin to a silent movie still.

All were truly a technical tour-de-force, no doubt made even more effective by the company’s always-brilliant resident lighting designer David Martin Jacques. Simply put, this was Schamberger’s gambit to improve upon Verdi.

In theory, "Il trovatore" can really use some help. The story is a violent melodrama that leaves gaping holes in a convoluted story. Hopefully, it is not a fuddy-duddy critic writing here maintaining that the nebulousness of the opera’s original scenario is just right, allowing for an unbroken mood of darkness and anguish. Clearly, many in attendance were fans of these machinations. So for now, let us leave this argument and go on to what was an unqualified success: the music-making on this evening.

Trovatore is first and foremost a singer’s opera. As is always the case at Central City, the chorus, comprised of apprentice and studio artists, was superb. It is a real treat to hear these stunning choruses sung with such drama, power and beauty.

The principals all had huge voices that shook the house to its foundation. It's hard to imagine a more ideal Manrico. The “troubadour” was sung to perfection by Jonathan Burton, who had a fine stage presence as well. His beloved Leonora was the soaring work of Alexandra Loutsion whose sound was always focused but had at times a different quality from low-to-high register. Our monster here is the Count di Luna. Michael Mayes was at his best — such a fine villain with a dramatic vocal approach that never failed to be on the attack. Ashraf Sewailam folded in nicely as di Luna’s henchman Ferrando, but had some laughable theatrical moments. (Perhaps reveling in the datedness of the piece, Schamberger did little to contend with the awkward moments in the opera).

Best of all was Azucena, the gypsy protagonist of the story. Lindsay Ammann brought a stunning mezzo and a twisted drama to the role and it was impossible to keep one’s eyes off her whenever she was on stage.

Aaron Breid, who prepared the chorus, had his turn conducting the company’s orchestra, taking over for the redoubtable John Baril on this occasion. The sound coming up from the pit had just the right bite to it.

The production looked great and the costumes designed by Dana Tzvetkova were especially impressive.

Ultimately, this "Il trovatore" offered the perfect fix for lovers of Verdi’s music and likely made new fans of those new to opera.

Central City’s Summer Festival also includes performances of Mozart’s "The Magic Flute" and all operas continue in repertory through Aug. 5. Visit www.centralcityopera.org for tickets and information.

Pikes Pick: Not quite Bonnie Raitt, but the next best thing