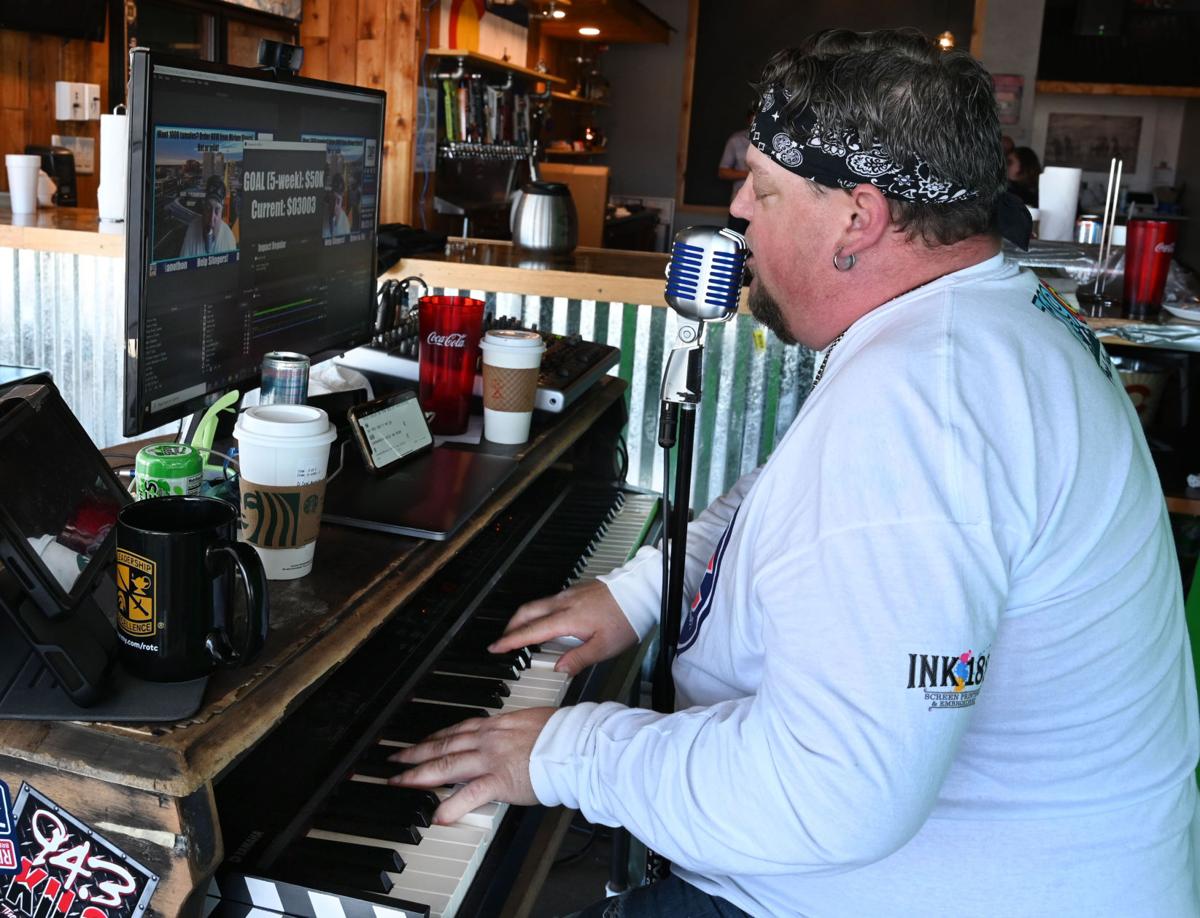 For 24 hours straight, piano man Papi Sorrels played and sang to raise money for local restaurants that are struggling. He started at noon on Saturday, May 2, at Slingers Smokehouse & Saloon and ended on Sunday at noon. On Saturday evening, a drive-in show and dinner was held in the parking lot of the restaurant while everyone stayed in their cars. 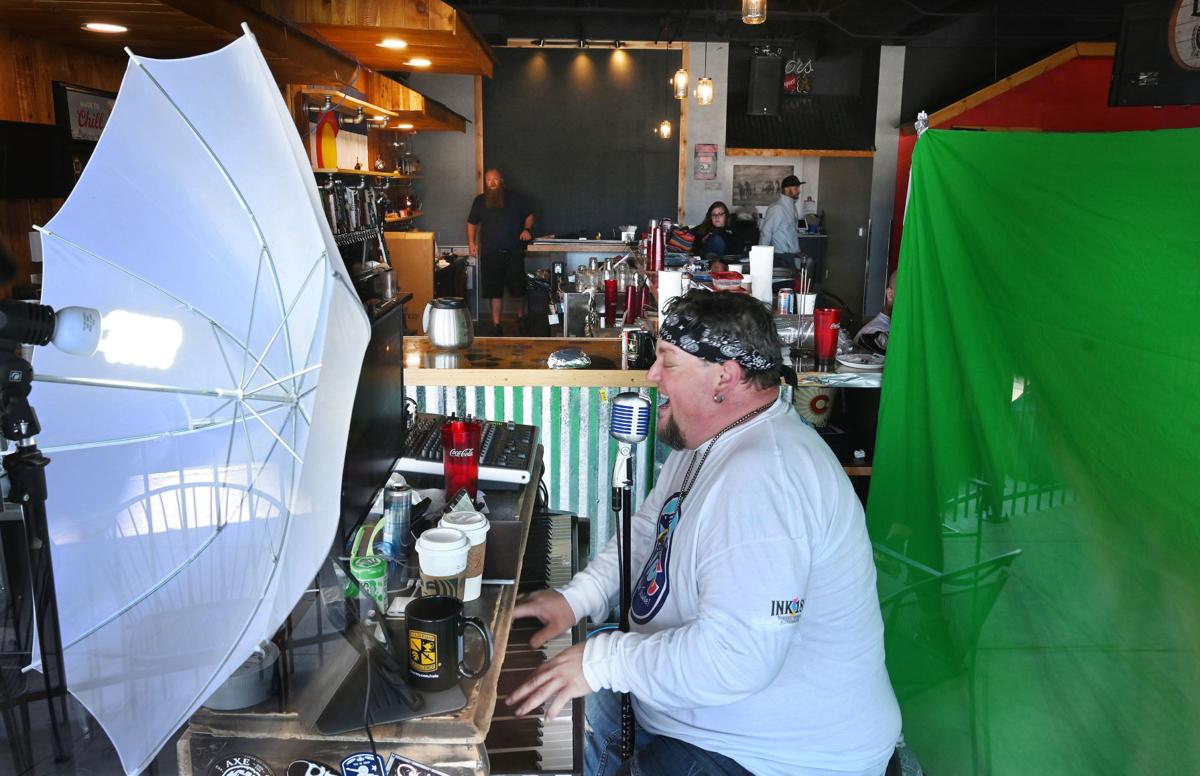 Musician Papi Sorrels has done multiple pianothons to earn donations for struggling restaurants and bars. His next 24-hour show is Saturday at The Chicken Coop in Black Forest.

For 24 hours straight, piano man Papi Sorrels played and sang to raise money for local restaurants that are struggling. He started at noon on Saturday, May 2, at Slingers Smokehouse & Saloon and ended on Sunday at noon. On Saturday evening, a drive-in show and dinner was held in the parking lot of the restaurant while everyone stayed in their cars.

Musician Papi Sorrels has done multiple pianothons to earn donations for struggling restaurants and bars. His next 24-hour show is Saturday at The Chicken Coop in Black Forest.

Papi Sorrels is the piano man of COVID times.

The longtime musician is on a mission to raise money to help as many pandemic-hit bars and restaurants throughout the Pikes Peak region as he can. And he’s doing it the best way he knows — by making the tunes rain. He’s been doing donation shows since mid-March, but decided to up the ante in May by doing five 24-hour pianothons five Saturdays in a row. It didn’t work out quite as expected.

He finished the first one May 2 at Slingers Smokehouse and Saloon. May 9 was Roosters House of Ramen, and that’s where his plans snagged. They were forced to shut down around 10 p.m. after the owner got a call from authorities that they were encouraging congregation. So the following Saturday, Sorrels scaled back his performance time to eight hours at Knucklehead Tavern and played from 2 to 10 p.m. On May 23, he also performed an eight-hour show at Good Company Bar. His final performance, beginning at noon Saturday, will see him return to his 24-hour format at The Chicken Coop in Black Forest. The bar is outside El Paso County, so he hopes the show can go the full 24 hours.

“We’re not trying to make a political statement,” says Sorrels, the founder of 719CO, a nonprofit dedicated to shining a light on the entertainment, dining and outdoors industries in Colorado Springs. “It’s about hope and community and support. We do it as a labor of love and say let’s play as close to the rules as we can. We try to keep a safe and fun environment. It’s good during this time to keep hope running around in everybody’s head.”

The evening is set up like a drive-in movie. Sorrels plays inside the venue and broadcasts the performance on giant movie screens outside. People sit in their parked cars, tune in to an FM transmitter to hear the show and order food from either the restaurants, or, barring the lack of a kitchen, food trucks.

“It almost looks like a telethon,” says Sorrels. “I interview local businesses on stage. I make green-screen scenes for them and put their companies up. Growing up with Jerry Lewis telethons was my inspiration. We do stuff for kids. I’ll do a Disney set.”

Sorrels has that envious gift of being able to play by ear. He first got his start in the music scene in the early 2000s as part of a dueling pianos act at the downtown club Rumbay. His first solo gig followed shortly thereafter at 32 Bleu, and then his music career took off, and he toured the world.

Part of the fun of his shows nowadays is his audience’s determination to stump him on a song. But he’s got more than 3,000 tunes tucked away inside him, including old jazz standards and recent Grammy Award winners. Joining him on stage is drummer Nate “Trashcan” Smith.

“It’s very vaudeville, random, high- energy, I love you all show,” says Sorrels. “One of our rules is no set list. You tell us what our set list is. We work as a radio and DJ for people.”

Since mid-March, Sorrels has raised $15,000. At the end of each of the May concerts, he’s been able to donate a chunk of money to the venue’s bartenders or owners. He’s pleased with the outcome and plans to continue playing through the summer to earn donations for restaurants and bars.

“It’s evolved into what I’d hoped,” he says. “We’re helping each other like in the old days. One of the best times for raising money was in the ’80s, with Live Aid and Farm Aid. You get a feel that’s come back here in Colorado Springs. That was the goal and mission — can we care about each other and root for each other? It’s happening.”

When: Noon Saturday to Noon Sunday

Cody Oldham is a 16-year-old professional wildlife and landscape artist who lives near Woodland Park.