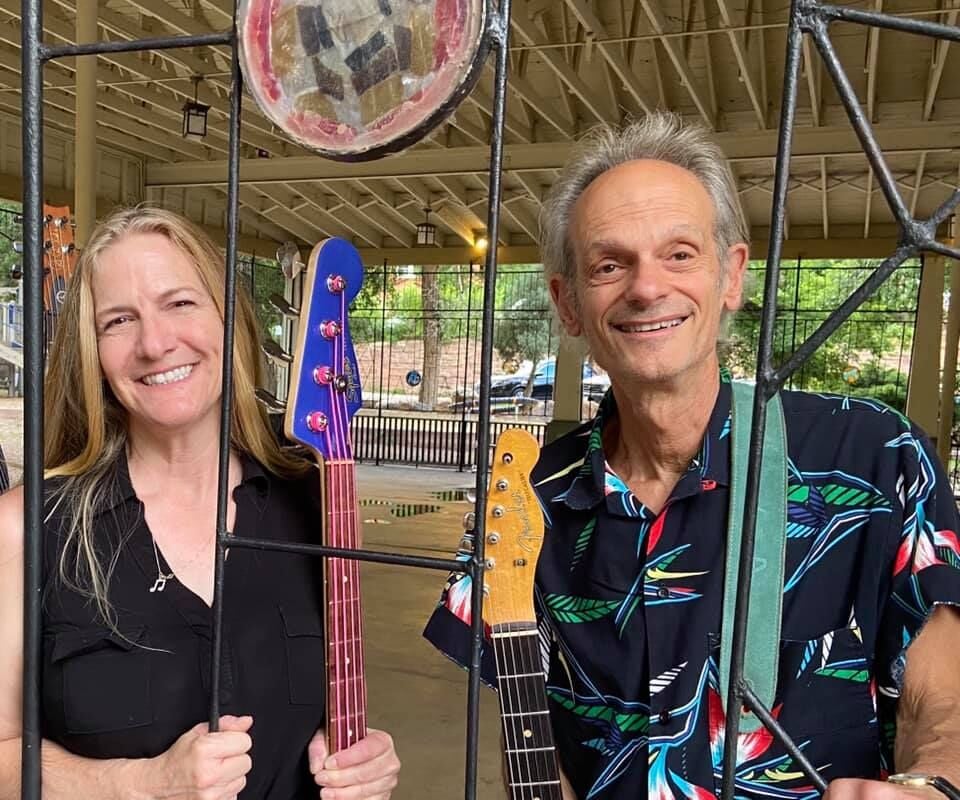 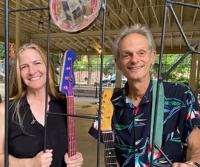 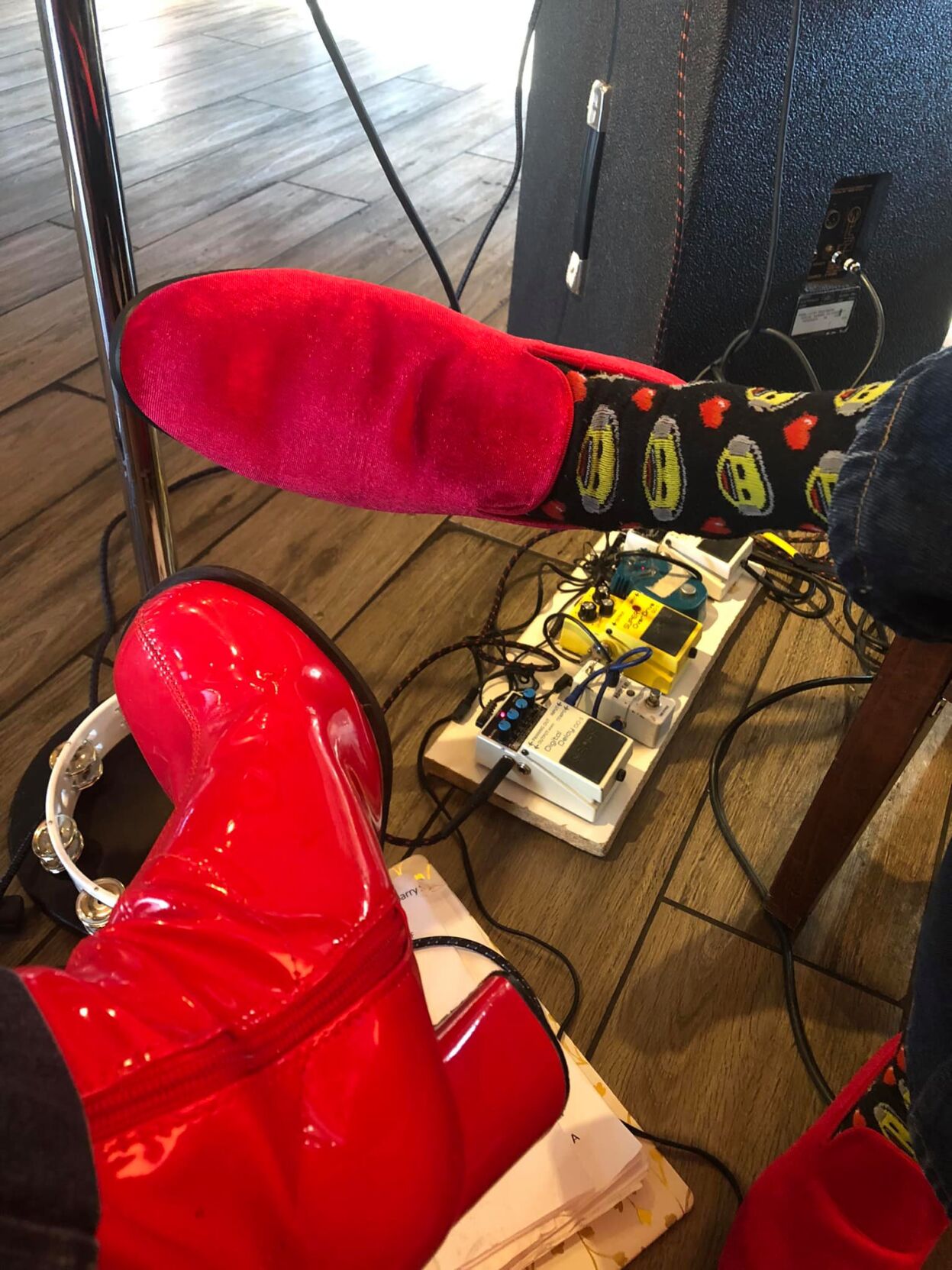 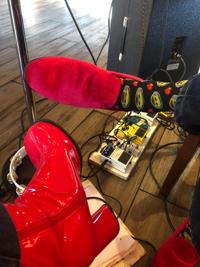 Members of the Hot Boots Band are known for wearing red shoes during shows. 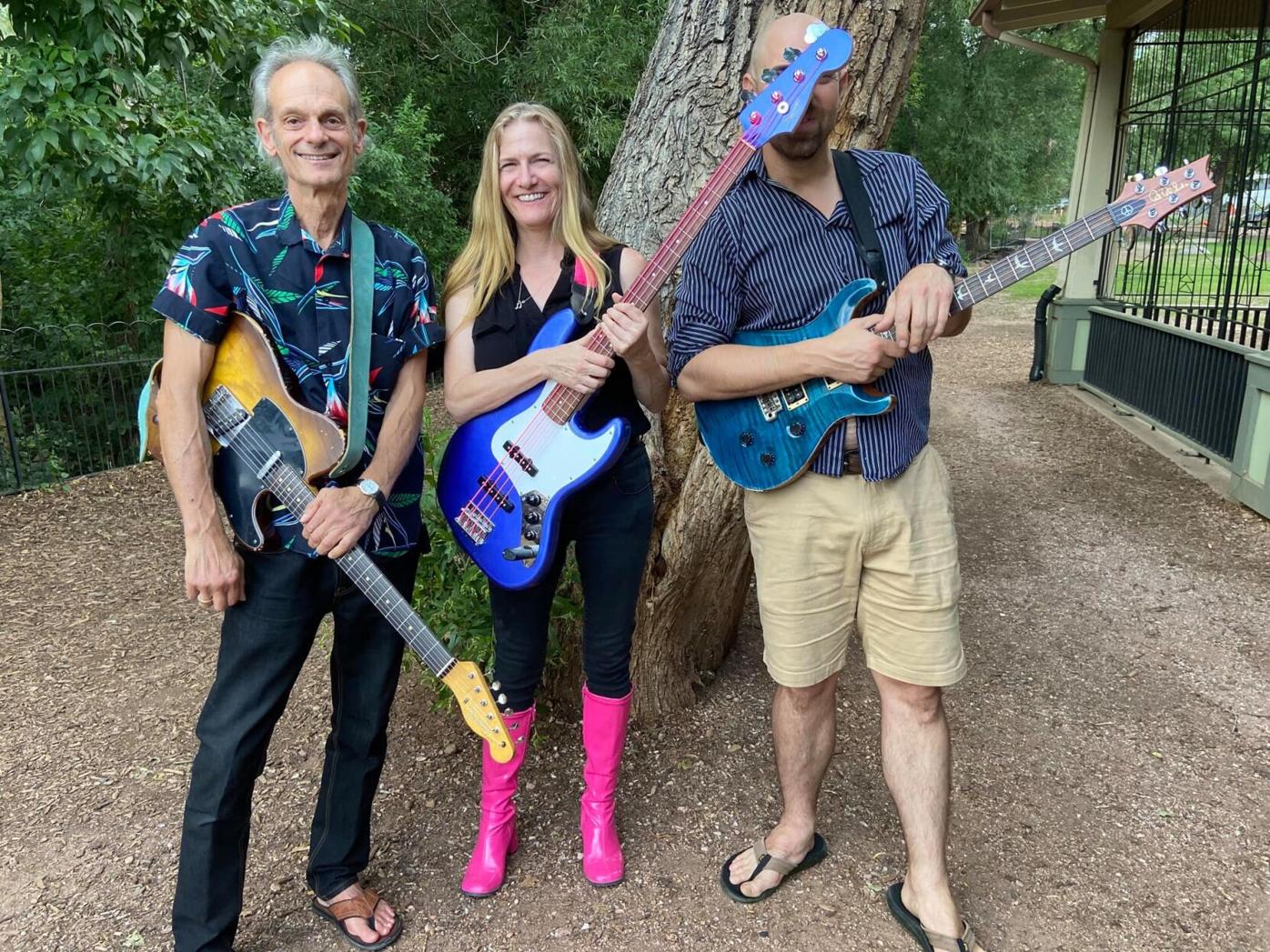 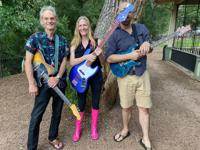 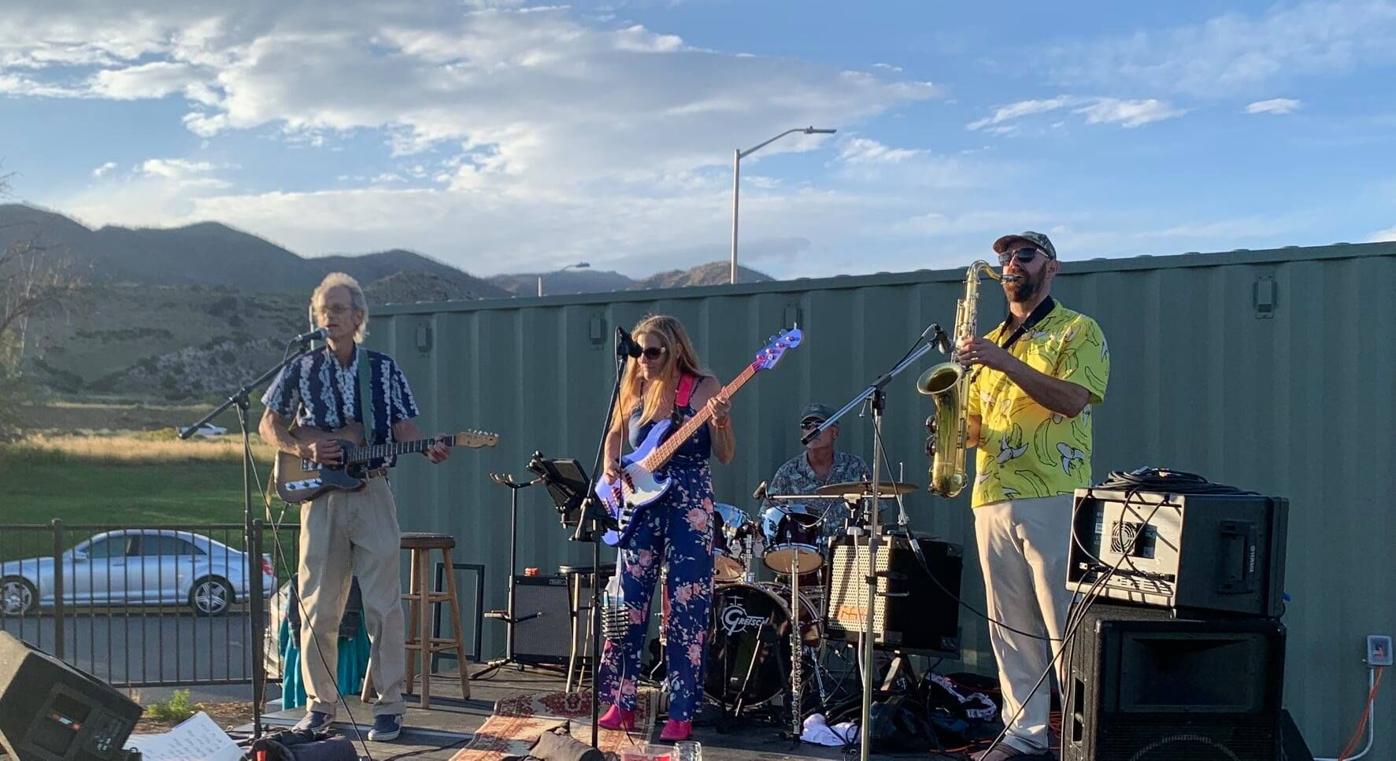 Members of the Hot Boots Band play a variety of jazz, blues, country and pop music. 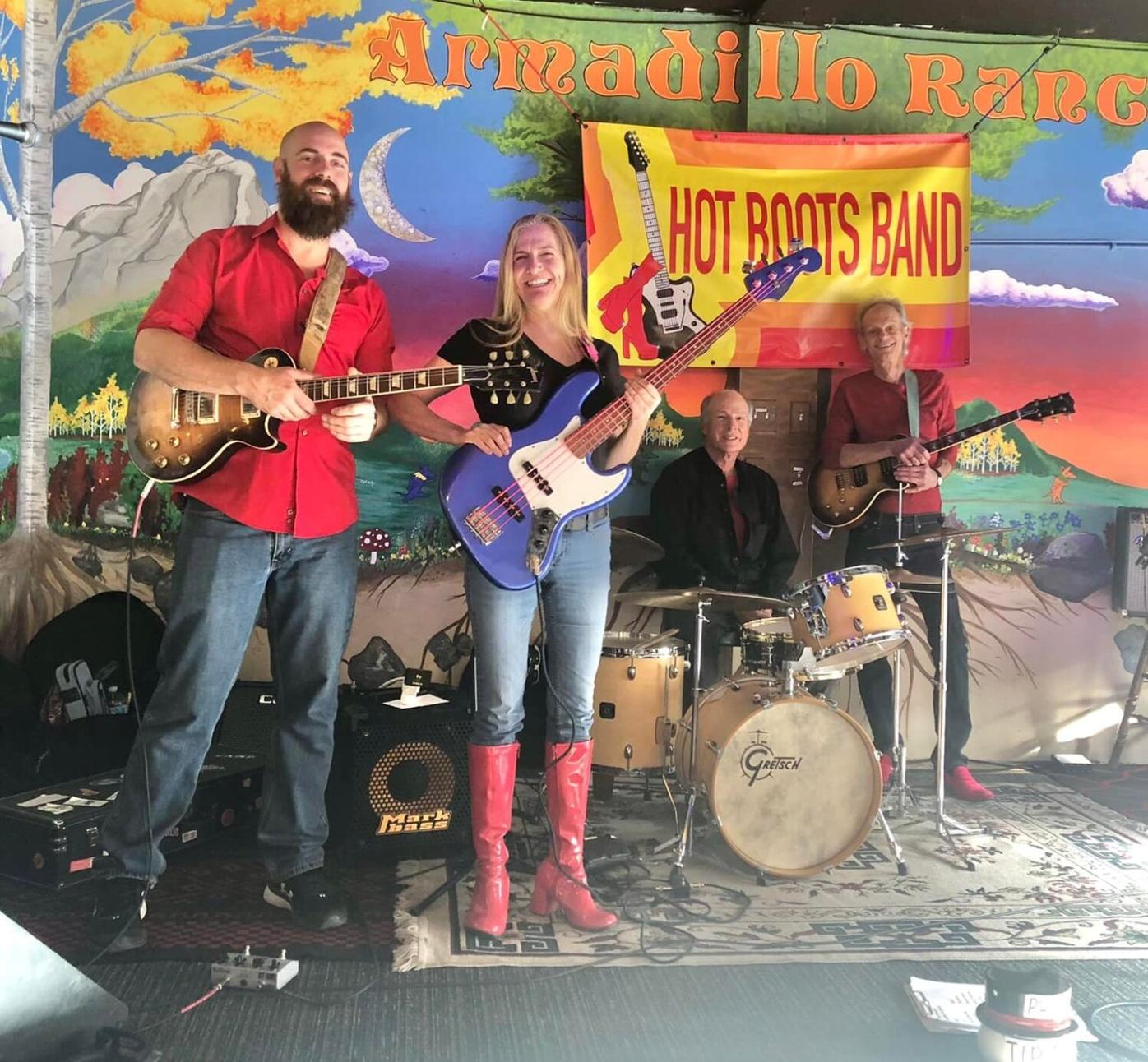 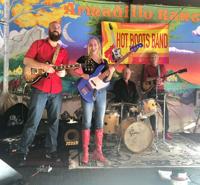 You’ll hear a mix of song genres at a Hot Boots Band performance.

Members of the Hot Boots Band are known for wearing red shoes during shows.

Members of the Hot Boots Band play a variety of jazz, blues, country and pop music.

You’ll hear a mix of song genres at a Hot Boots Band performance.

The band had other names.

They tried the trick of blending letters from each of the members’ names. But “XBW” didn’t have much of a ring to it.

Barry Spaeth, the trio’s guitarist and singer, came up with an idea. It was inspired by his bandmate’s shoes.

It’s just one pair with flair that Christina Van Camp is known to rock during gigs. She has a shoe closet that resembles the rainbow.

As of a few months ago, it became their name: Hot Boots Band.

Spaeth, who has performed in bands in Colorado Springs for decades, knew a catchier name could help.

“It’s coming right from one of the members,” he said. “I thought it was a good little marketing move.”

He went a step further. Spaeth found himself a pair of red velvet shoes to wear. While he took the purchase upon himself, he jokes that it was under Van Camp’s direction.

“It’s a fun conversation piece to say, ‘Look what she made me do,’” he said.

That’s one quip you might hear at a Hot Boots Band show.

After many years in this business, Spaeth has learned the importance of putting on an “energetic show.” That might include bantering with listeners, bringing people on stage to play the trampoline or jumping into the crowd to dance. And, sometimes, it means matching shoes.

Whether he’s playing with Hot Boots Band or a litany of other musicians, Spaeth keeps a motto in mind. It’s his take on an old childhood rhyme: “It’s one for the money, two for the show.”

He doesn’t want to just play for the money. He wants to put on a show.

The rhyme was fittingly referenced in a song about footwear, “Blue Suede Shoes.”

This mentality has helped the group gain popularity around Colorado Springs since forming in 2018, when the three members met at a local blues jam.

Out of that meeting, they split into two duos. Van Camp played one with Spaeth and another with Jeff Wilson, a guitarist and saxophonist.

Near the beginning of 2020, the two duos merged to form another entity, which is now called Hot Boots Band.

“Here’s the cool part,” Spaeth said. “We’ve been playing like crazy this past year.”

The band, which includes drummer Bruce Neal and occasional guests, plays regularly at the Historic Ute Inn, Armadillo Ranch, area breweries and parks. They have gigs booked through April.

At their show, you’ll hear a mix of Broadway show tunes, jazz standards, country music and pop hits. Spaeth said he prefers playing a variety of genres over being a “one trick pony.”

“It’s beneficial for the players and the audience,” he said. “You really don’t know what’s coming next. If the last song wasn’t exactly your cup of tea, the next one might be.”

Their show posters on Facebook often give subtle hints at what to expect, with the phrase, “Let’s dance.” Another one reads, “Pizza, beer and boots.”

No matter the venue, you can certainly expect to see colorful boots. Sometimes, that’s the only thing people remember about Van Camp.

“I really think we have the most fun of any band,” she said. “We really have fun together and we want everyone that comes to see us to have fun too.”

Like most musicians, Oisín Mac Diarmada doesn’t always know what’s in store for him each day.