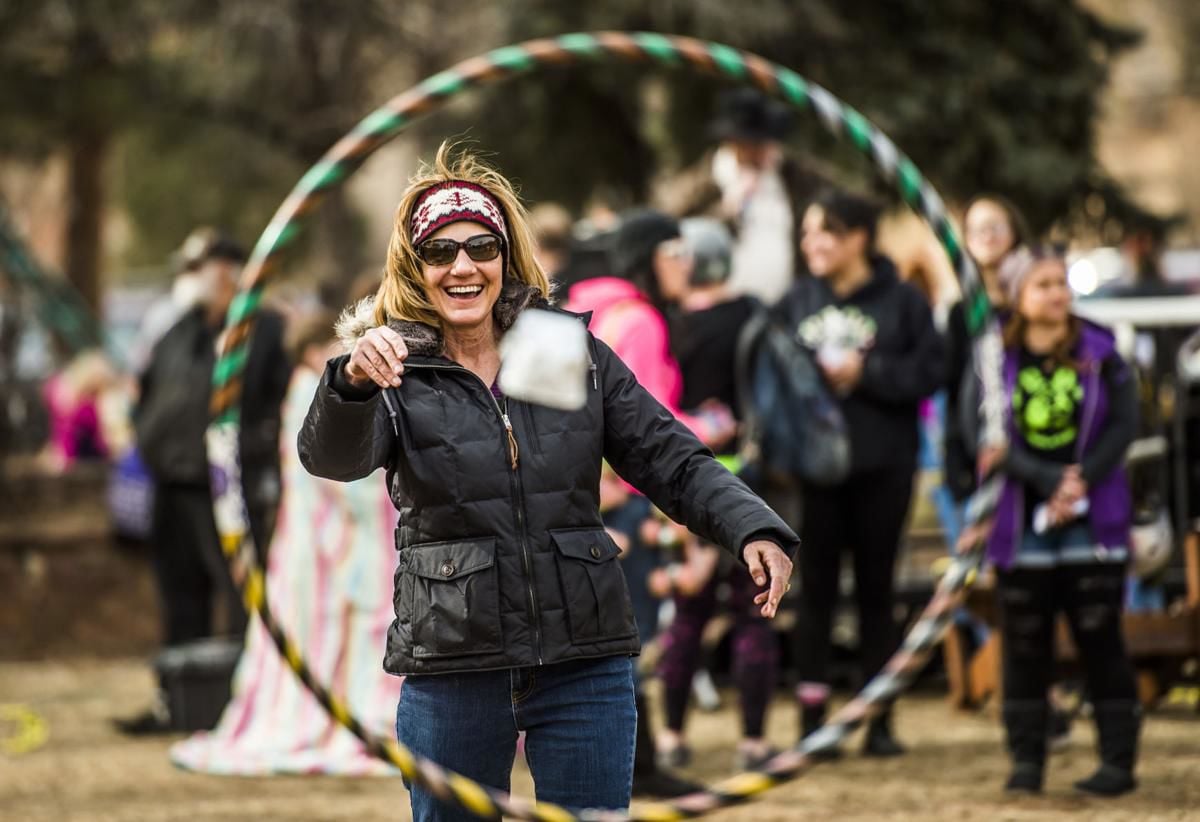 Molly D’Arcy tosses a fruitcake through a hoop during the 2017 Manitou Springs Great Fruitcake Toss at Memorial Park. This year’s event will be Saturday. 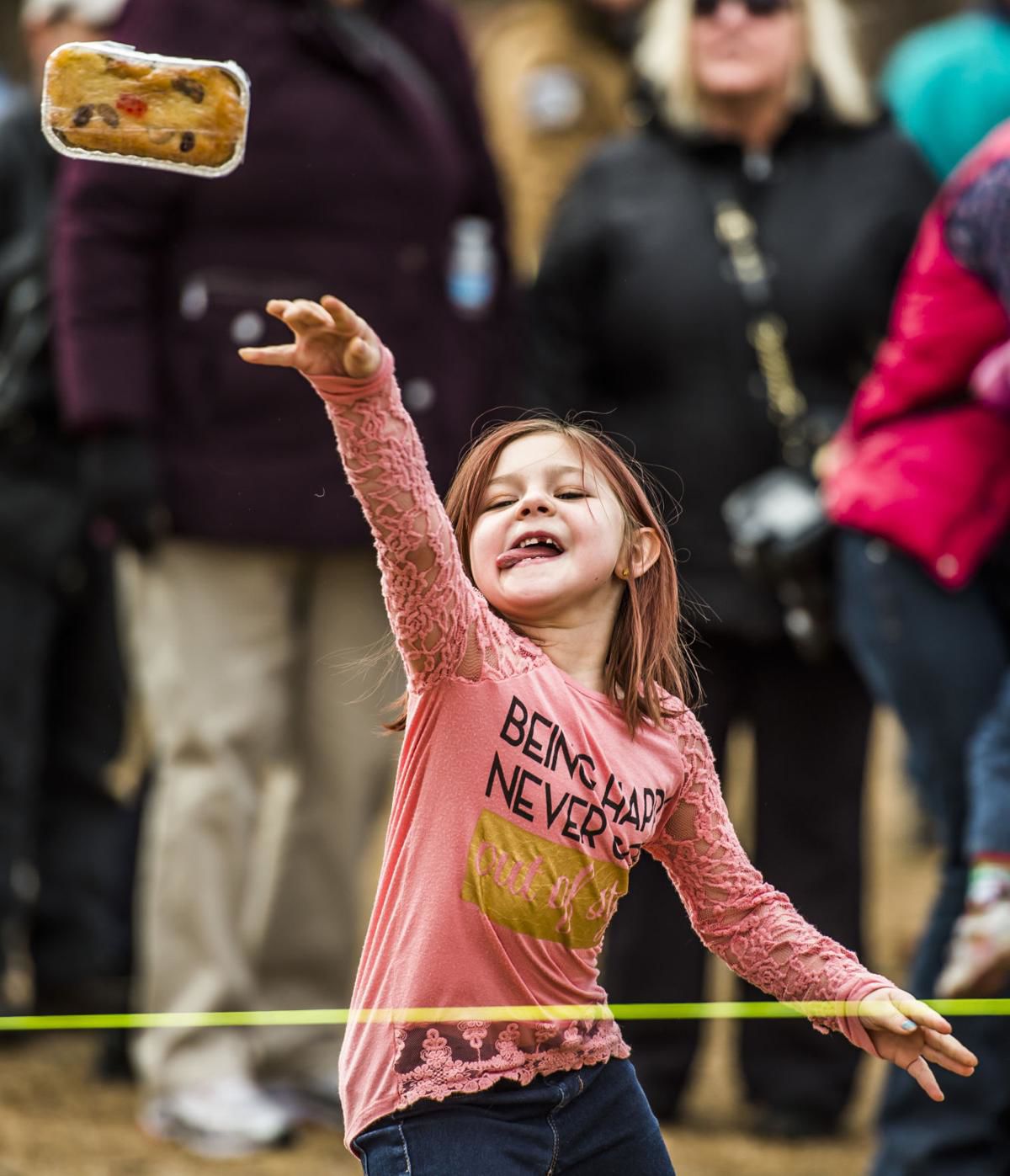 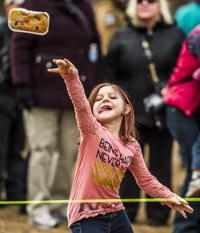 Kami Wilson, 7, throws a fruitcake during the 2017 Manitou Springs Fruitcake Toss at Memorial Park. This year's Toss will be Saturday, Jan. 26, 2019.

Molly D’Arcy tosses a fruitcake through a hoop during the 2017 Manitou Springs Great Fruitcake Toss at Memorial Park. This year’s event will be Saturday.

Kami Wilson, 7, throws a fruitcake during the 2017 Manitou Springs Fruitcake Toss at Memorial Park. This year's Toss will be Saturday, Jan. 26, 2019.

The calendar in Manitou Springs is dotted with quirky celebrations. October is time for the Emma Crawford Coffin Races. In January, folks count the days to the Manitou Springs Great Fruitcake Toss.

The fruitcake toss originally coincided with National Fruitcake Day, typically in December. But it now falls on the last Saturday in January to get a post-holiday crowd.

“It’s January. We’re all recovering from the holidays. It’s Manitou Springs. I don’t know what better way to spend a chilly January afternoon than to toss Aunt Mary’s fruitcake in the park,” said Jenna Gallas, special event coordinator for the Manitou Springs Chamber of Commerce.

The tradition dates to 1995, when locals gathered in the park to chuck their unwanted holiday fruitcakes. This year’s toss will be in Manitou’s Memorial Park from 1 to 3 p.m. Saturday.

The event once was held at the high school but “got a little gnarly,” Gallas said. “They were doing big, pneumonic, robotic catapults launching the cakes a mile into the mountains ... and sometimes into houses. We wanted to get back to the hand toss. When the staff has to go to someone’s house in the middle of the winter and scrape fruitcake off a screen door, it’s not a good thing.”

Dwindling attendance and sponsorship led to cancellation of the 2014 event. A local group revived it a year later. Now back in the hands of the chamber, it’s more exhibition than competition. Saturday’s “old-fashioned” tosses will be judged for balance, accuracy, speed and distance. Those who wish to build apparatus to hurl the cakes can participate in robotic, mechanical and three-man slingshot tosses. Age groups are 10 and younger, 11-17, 18-59 and 60 and older.

Participants can bring their own fruitcakes (must be rectangular and weigh no more than a pound) or can “rent” one for $1. To waive the fee, bring a nonperishable food item to donate to the Manitou Springs Food Pantry. Other activities include a fruitcake bake-off, where every entrant gets a $10 gift certificate to Shamrock Foodservice Warehouse and the winner nets a $100 gift certificate; the crowning of the annual Fruitcake King or Queen; the Rocky Mountain Vibes’ fruitcake speed pitch; and photos with Mr. Fruitcake, dressed in full fruitcake regalia. Visit the warming center at Manitou Springs Heritage Center, 517 Manitou Ave., for hot cocoa, snacks and a glimpse at a vintage fruitcake tin exhibit.

Chef Lyn Harwell will bake up to 75 fruitcakes to be “rented.” His recipe is good for eating, especially when topped with a little rum sauce, said Gallas. But because the cakes will be tossed by hand repeatedly up to 160 feet, the chamber will properly dispose of the crumby remains. A “fruitcake doctor” will be on hand to patch baked goods that see wear and tear.

Gallas expects 400 to 500 spectators to pack the park, where there’s free parking. Also, a free shuttle will run from a lot at 10 Old Man’s Trail.