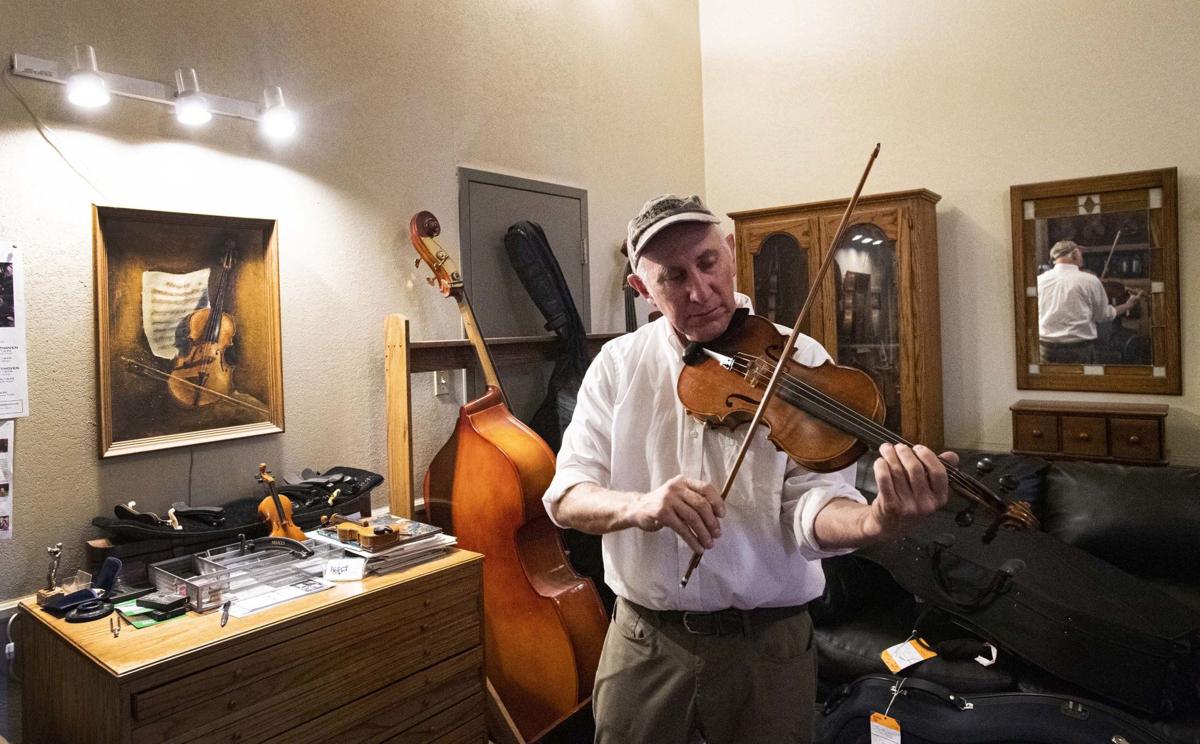 Violin maker Juan P. Mijares plays a violin in his downtown Colorado Springs violin shop early this month. Mijares begins his workday by playing his instrument before switching to his workshop. 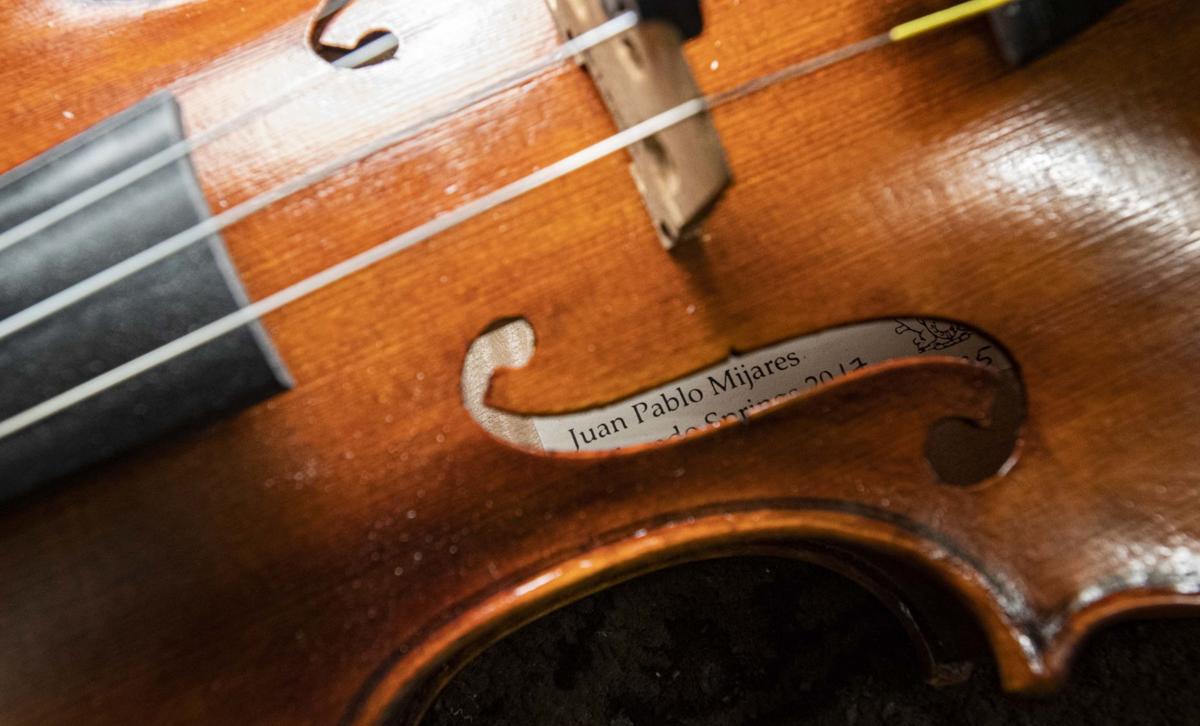 Jaun P. Mijares puts his label on the inside of every instrument he creates. Mijares takes about 200 hours to build a violin using tools and techniques from centuries ago. 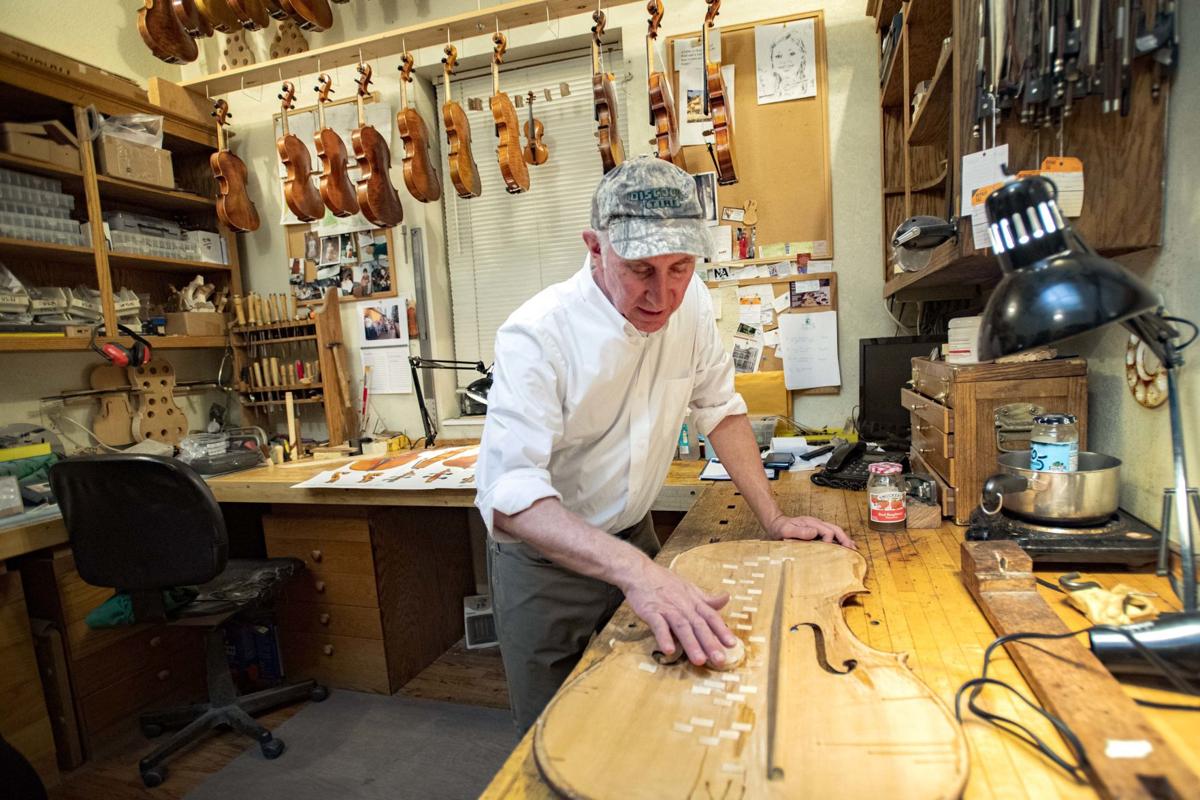 Juan P. Mijares repairs an instrument in his workshop in downtown Colorado Springs. 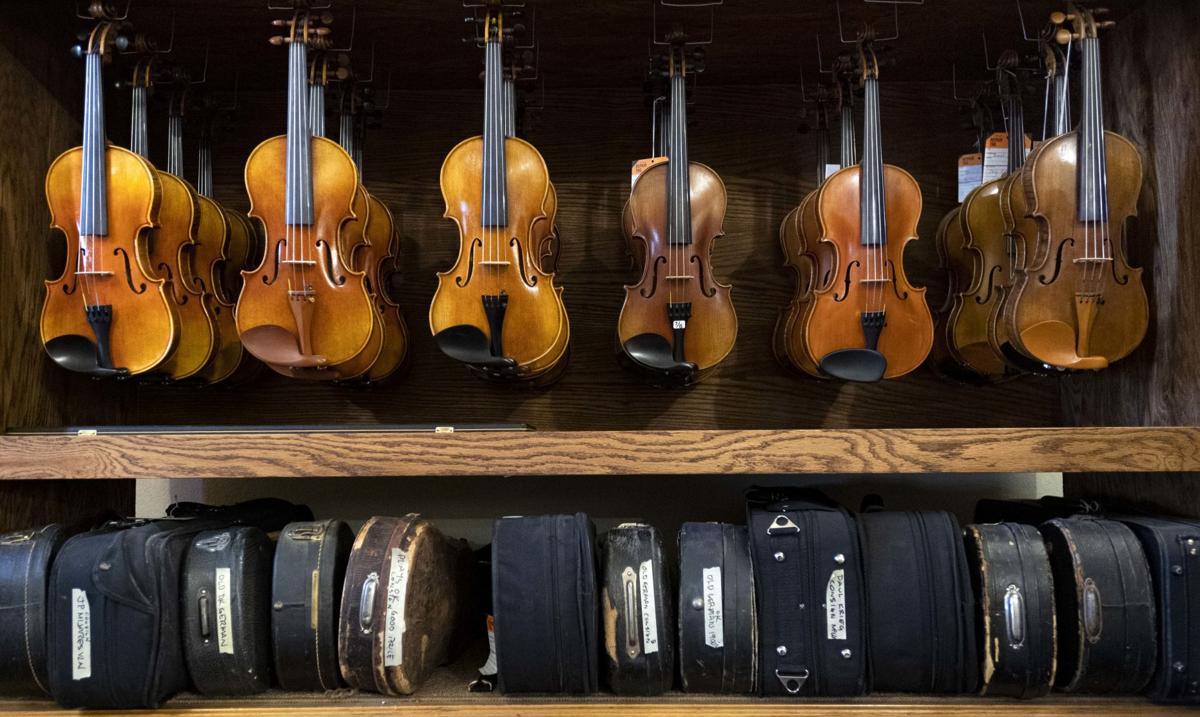 Violins hang in the showroom of Juan P. Mijares’s violin shop in downtown Colorado Springs. Mijares opened his shop in 1987. Violins made by Mijares sell for $12,000 and more, with selling for as much as $75,000. 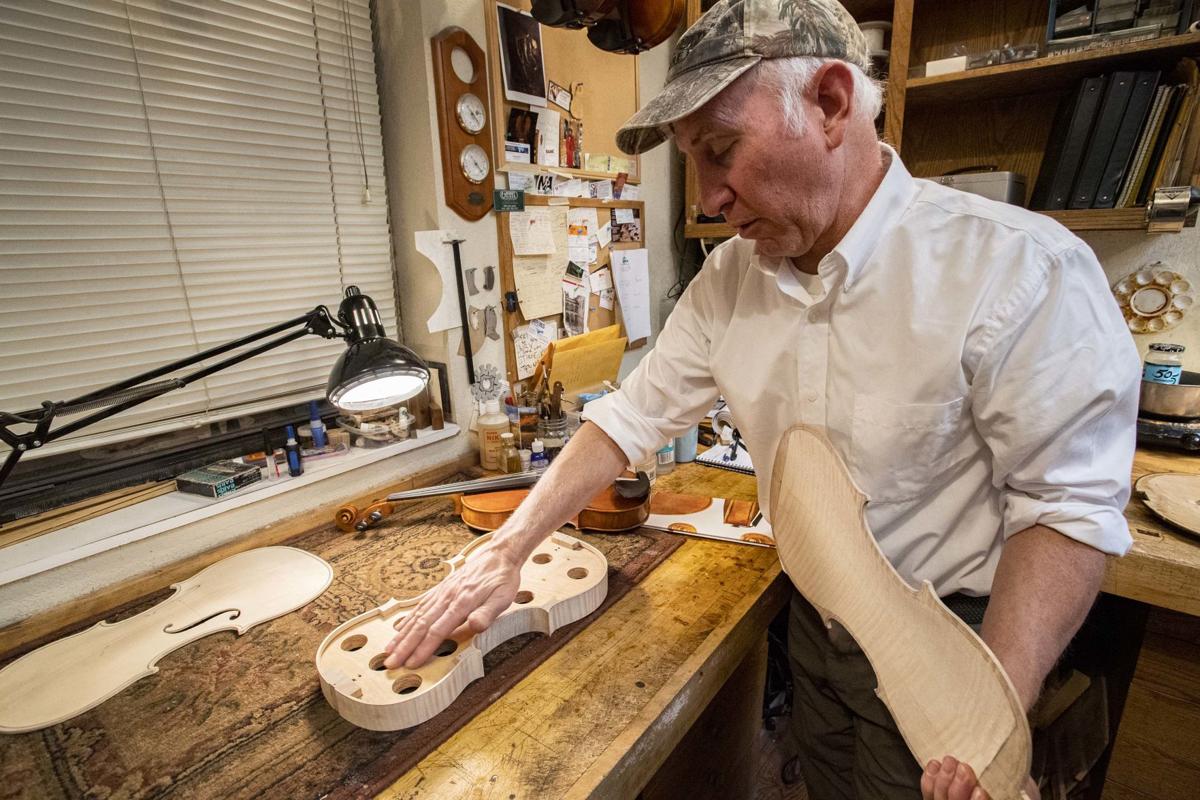 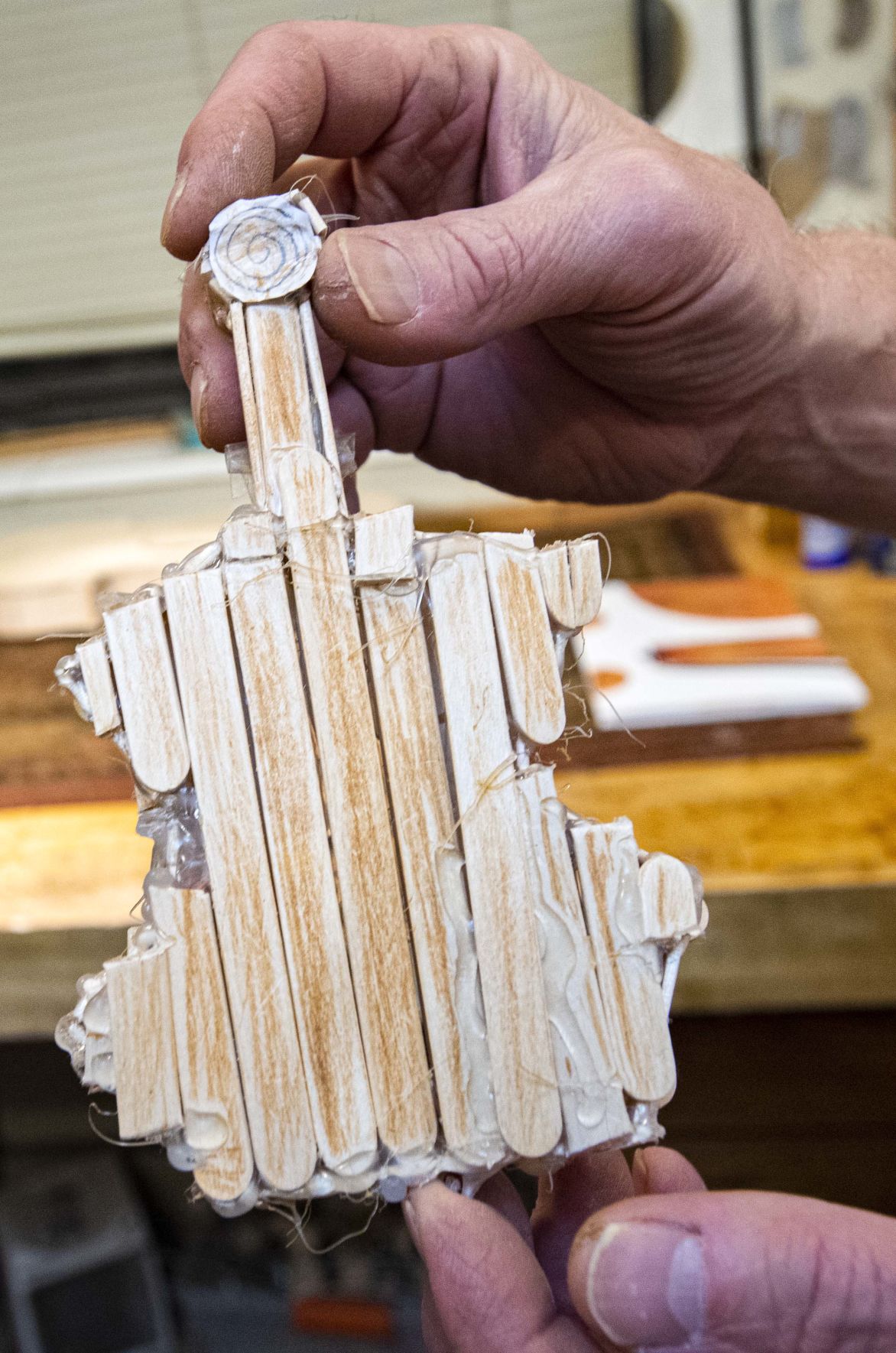 Juan P. Mijares hold the popsicle violin his youngest daughter of five children made for him. (The Gazette, Christian Murdock)

Violin maker Juan P. Mijares plays a violin in his downtown Colorado Springs violin shop early this month. Mijares begins his workday by playing his instrument before switching to his workshop.

Jaun P. Mijares puts his label on the inside of every instrument he creates. Mijares takes about 200 hours to build a violin using tools and techniques from centuries ago.

Juan P. Mijares repairs an instrument in his workshop in downtown Colorado Springs.

Violins hang in the showroom of Juan P. Mijares’s violin shop in downtown Colorado Springs. Mijares opened his shop in 1987. Violins made by Mijares sell for $12,000 and more, with selling for as much as $75,000.

Juan P. Mijares hold the popsicle violin his youngest daughter of five children made for him. (The Gazette, Christian Murdock)

Don’t mind the violins yet. There are other things to look at.

A VCR and a stereo and outdated wall calendars. Concert invites dating to the early 2000s. Thank- you notes spanning just as long. An old green chile jar filled with glue. A pencil sharpener. Photos of little faces that have grown older.

The workshop of Juan P. Mijares is small and a little messy. It’s the kind of interesting mess that can only collect over decades of inhabiting a place. Like a worn-in junk drawer, things pile up. But you still know just where to find each misplaced thing. It’s all there for one reason or another.

But finding Mijares’ violin shop isn’t so easy. A clue: It’s in the heart of downtown Colorado Springs. Even a longtime resident would need directions, though. Mijares suggests first-time visitors call him when they’ve parked on North Tejon Street. On the phone, he’ll direct you to an alleyway. Then, through an open gate and a storefront that looks like a cottage.

The violin maker is inside.

Where music is made

You hear chimes when you walk in. A violin is overhead, set up to sing when the door swings.

The first thing you see are the violins. And the violas and the cellos. More than 100 in total. Some were made in the 1700s. Others were made within the past 10 years. Mijares sells them for as much as $75,000.

“Since we’ve been here so long, I’ll see the same instrument come in more than once,” he says. “It’s like seeing an old acquaintance come back.”

Mijares opened this place in 1987. His shop is unlike any other downtown. He’s one of around a dozen working luthiers in the state.

But he prefers to stay sort of hidden.

When he bought the multi-unit building, he could’ve set up shop in the front. He could’ve worked with windows facing the street and people walking by.

He’s glad to be in the back, where there are no “looky loos,” he says. Fewer distractions that way, he says.

His work — building and restoring instruments — takes focus and quiet.

Interruptions happen, like when his cellphone rings with questions from customers. And there are lots of questions. Professional musicians call about repairs and parents call asking where to find lessons for their kids. Longtime clients wonder about the worth of their violins and collectors inquire about what Mijares has in stock.

“After 30 years, there aren’t many problems that stump me,” he said.

He’s an expert by now. In high school, the California native wanted to play guitar but couldn’t afford one. He taught himself to build his own.

Mastering that craft, he said, “sounded more appealing than going to college.”

So he applied to the Violin Making School of America in Salt Lake City. The school takes only five students per year. Mijares was one of them.

Violins have become his life. His five kids, ages 10 to 32, all play a string instrument and his wife “is a wonderful player,” Mijares said. His youngest daughter talks about taking over her father’s business. She’s made her first violin — out of popsicle sticks.

He’ll be OK if she sticks to playing the violin for fun, though. The luthier’s greatest joy is watching his family make music.

He finds joy, too, in making the thing that makes the music. To do so, he uses pieces of wood, cut from spruce trees, and animal hairs. His process doesn’t require any machinery. Just tools such as chisels and glue. And a hair dryer. That’s for heating the glue in place. The sun is needed to stain the wood.

Building one violin takes about 200 hours. Mijares is happy if he makes four in one year.

The time is worth it. Not just for the money: His violins go for $12,000 and he sells cellos for double that price.

“It makes a much better product if one person makes it,” Mijares said. “It’s more of a piece of art.”

When he repairs violins, he loves “being part of history and adding to the history.” When he makes pieces from scratch, though, he’s creating his own history.

“Hopefully 300 years from now, someone will be playing the violin that I made,” he said. “That’s a nice thing to think about.”

With care, his instruments will last that long. And they sound better and better.

“As it ages, the sound resonates more and the wood gets stronger,” he said. “That’s something you can hear.”

‘Stuck in the 17th century’

If you didn’t guess by now, Mijares is an old-fashioned man. He welcomes the label.

Looking around his workshop, he does seem stuck in some sort of past. There’s a wall calendar from 2016 and the page shows an Aaron Copland quote: “To stop the flow of music would be like the stopping of time itself, incredible and inconceivable.”

Maybe he hasn’t turned the page for a reason. Maybe that’s the man’s mission: to keep the music flowing.

To carry out his mission, Mijares has a routine. His days start the same way. Early. He drives from Woodland Park to open his downtown shop. But a day doesn’t really begin until Mijares spends a few minutes, maybe more, playing the violin.

When his bow hits the strings, his eyes are nearly closed. What comes out is something from Bach he memorized years ago.

“Playing is a stress reducer,” he says. “It organizes your brain for the day.”

When Mijares plays, he hears things a casual listener wouldn’t.

“Every violin has a voice,” he said. “That’s why, when you’ve had one for a while, you get attached to it.”

It’s like, he says, picking up the phone and instantly knowing the voice on the other end by the way they say hello.

Right now, Mijares is attached to a 3-year-old violin.

He played it in the middle of his workday. As he played, something small appeared just under his eye.

It looked like a tear at first. But no. Just a fleck of wood that somehow landed on his face. This, after all, is what makes him happy.

Musicians can't go on tour right now. Here are ways to support them

Here are some ways to support musicians from home.