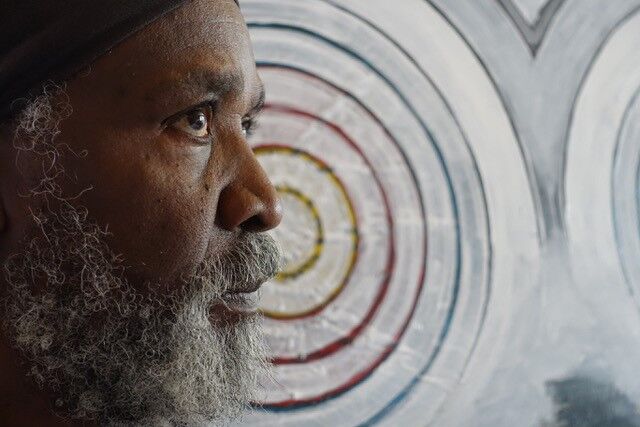 Floyd Tunson didn’t think a piece of art he made more than 25 years ago would still be so relevant today.

The Manitou Springs-based artist’s installation “Hearts and Minds,” from his “Endangered” series, was created in the mid-1990s as a response to the gun violence that took the life of his youngest brother, Randolph. The 23-year-old was killed by Denver police in 1974.

“It was devastating for me and my family, and our little community,” said Tunson, who grew up in the ’50s and ’60s in Denver’s Five Points neighborhood.

“It wasn’t just grief, but anger and bewilderment. When that happens in somebody else’s family, it’s not just the family that’s affected, but all those people who are involved in that person’s life.”

He poured his anguish into the immense mixed-media work, which stretches 26 feet wide and 13 feet tall, and had to be done in pieces. Its images of guns, bull’s-eyes and young Black men address the impact of gun violence on young people of color. Decades later, it’s an issue that still frequents headlines, and always feels like deja vu to Tunson.

12 weekend things to do in Colorado Springs and beyond: AFA Planetarium, B-29 Superfortress, free comics, Canon City Festival and more

“I’m angry it’s still going on,” he said. “I don’t see it stopping real soon. It’s painful to watch it continue to evolve and go on with police killing unarmed young Black men. I never thought at this juncture in my life I would witness this going on in our society right now. I don’t know why any Black person with any intelligence would not be angry.”

Something else: "Endangered," the multi-disciplinary project presented alongside "Hearts and Minds," with Tomás Doncker & the True Groove All-Stars, performances June 17-18

Tunson’s installation is on display beginning Friday at Colorado Springs Fine Arts Center at Colorado College, which acquired the piece in 2020, and will be up through July 9.

“It stops you in your tracks. It is shouting. It is making its message so clear,” said Michael Christiano, FAC’s director of visual arts and museum. “Floyd has that magical blend of technical mastery and conceptual heft in this particular work that is of such scale and detail.”

For Christiano, the piece also sparked a bigger idea — to use it as a jumping off point for a larger conversation about gun violence and Black men. “Endangered” is a multidisciplinary performance-based project featuring several voices responding to Tunson’s work, including musician Tomás Doncker, Pulitzer Prize-winning poet Yusef Komunyakaa and videographer William Murray.

The project will run in video form in the galleries through the duration of the exhibit, and culminate in two live performances by Tomás Doncker & the True Groove All-Stars on June 17 at the FAC and June 18 at CC’s Armstrong Hall.

Creative work by CC and Colorado Springs School District 11 students, made in response to Tunson’s installation, also will be displayed.

“I think of when I did the work and it’s still very relevant with the gun violence,” Tunson said. “I wish it wasn’t. That means we’d be in a better place.”

With Epiphany, live music fans have a new option in downtown Colorado Springs

It can take time to wrap our minds around things that are more than one thing.