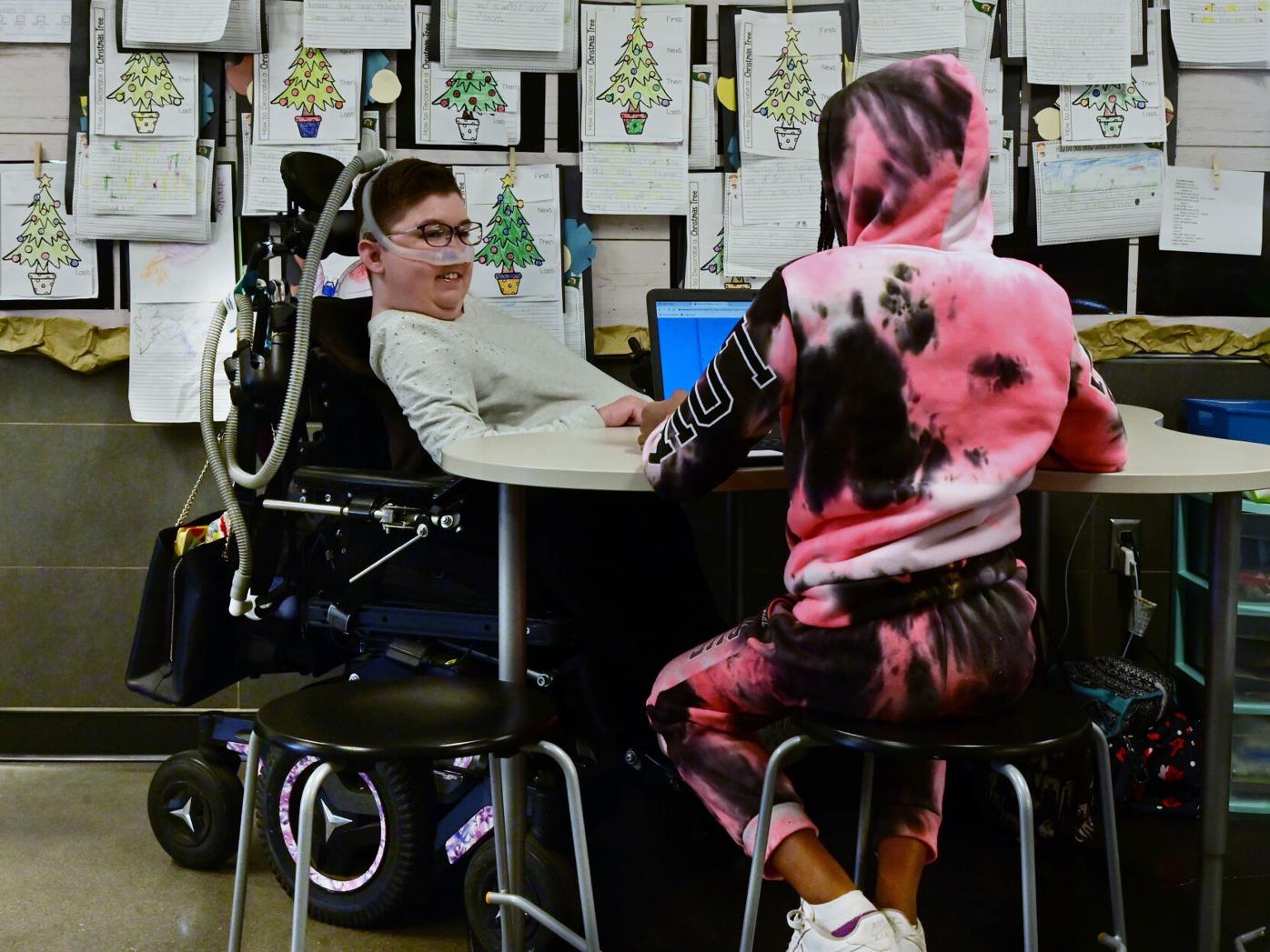 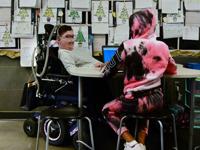 Cory Jacobson, a paraprofessional at Inspiration View Elementary School, works with a student at the school on Thursday, Dec. 9, 2021. Jacobson has spinal muscular atrophy, a rare, progressive neuromuscular disease and is one of the featured people with SMA to be featured in a music video. (Photo by Jerilee Bennett, The Gazette) 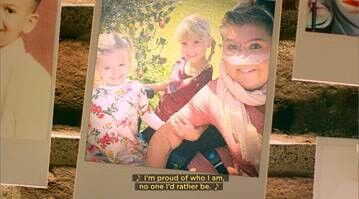 Cory Jacobson, right, pictured with her two children, in the newly released SPACES music video, which highlights the talents and humanity of people with disabilities to a broader audience.

Cory Jacobson, a paraprofessional at Inspiration View Elementary School, works with a student at the school on Thursday, Dec. 9, 2021. Jacobson has spinal muscular atrophy, a rare, progressive neuromuscular disease and is one of the featured people with SMA to be featured in a music video. (Photo by Jerilee Bennett, The Gazette)

Cory Jacobson, right, pictured with her two children, in the newly released SPACES music video, which highlights the talents and humanity of people with disabilities to a broader audience.

"I’m proud of who I am, no one I’d rather be,” read the lyrics beneath Colorado Springs mom Cory Jacobson’s appearance in a new original song and music video that encourages everyone to see and hear disabled people and recognize their talents.

Jacobson has spinal muscular atrophy, a rare, progressive neuromuscular disease. But her world isn’t all about the difficulties she experiences maneuvering life from a wheelchair and with the help of a breathing mask.

“The disability I have makes things a little bit more challenging, but it doesn’t stop me from living a relatively normal life,” she said Thursday.

“I have the same dreams and aspirations as the average person — I always wanted to be a mom, have a family, live on my own, get a job, get an education — and I’ve completed and been successful with those, but that doesn’t mean it came easy.”

Soul artist James Ian, a rhythm and blues singer, songwriter and composer, also has the genetic disease, abbreviated as SMA, and created the SPACES song and video.

The upbeat video shows children and adults with SMA doing all sorts of activities to lyrics such as “I’m not invisible, I’m an original,” and “If there’s one thing to see, it’s my humanity.”

The message affirms that disabled people belong in all spaces, Jacobson said.

“How people with disabilities, more specifically SMA, are living and thriving in the same space you are,” she said, “and we’re not all that different from our able-bodied peers.”

About one in four adults, or 26% of the population, has some type of disability that affects mobility, cognitive skills and other bodily function, according to the Centers for Disease Control and Prevention.

But disability representation continues to be lacking, advocates say.

“Too often, those with disabilities are defined only by their disability or labeled ‘inspirational’ and ‘brave’ by virtue of their disabilities, rather than for their talents and achievements,” said Michael Dunn, senior marketing director for Neurological Rare Disease at Genentech, which sponsored and coordinated the project.

Not knowing how to talk to and befriend people with disabilities is one of the barriers, Jacobson said.

“Some people don’t know how to approach those of us that have disabilities because we might look different or do things differently, but at the end of the day we’re all the same,” she said.

Jacobson, a Harrison High School graduate, is one of 11 participants in the music video, all of whom have SMA. She worked with the team from conception to creation. The process lasted a good chunk of the year, she said, and involved collaborating with high-profile music producers.

“One of the producers worked with the Backstreet Boys, who I absolutely love,” Jacobson said.

The first-of-its-kind musical production included children and adults who have SMA in all the steps of envisioning the message, writing and performing the song, storyboarding, directing the music video and designing the album art, according to Genentech.

The California biotechnology company develops and manufactures pharmaceuticals for serious medical conditions, such as SMA.

Jacobson was asked to participate in the project because of her background and strong desire to advocate for people with disabilities, Dunn said.

Jacobson is a mother to two daughters, ages 8 and 4, accepts foster children into the family home, works as a paraprofessional with special-needs students at Imagination View Elementary School in District 49, helps run an 11,000-member Facebook support group for SMA and is a motivational speaker.

She’s also working on earning a bachelor’s degree in psychology from Colorado State University. Her goal is to do mental health counseling.

“Cory’s unique insights were top-of-mind when Genentech brought together a diverse, creative team from the SMA community for a brainstorm,” Dunn said in an email.

Jacobson said she was hesitant at first.

“A big part for me is raising awareness for disability in general, and I really wanted to make it disability positive — not something people see to pity or be sympathetic about,” she said.

“After hearing more about the project as well as the people involved, it was a huge change of heart, and I was really excited and honored they thought of me to be involved.”

Coloradans have a chance to win $18.9 million this week in the Colorado Lotto+ drawing — the lottery‘s largest jackpot in nearly three decades.