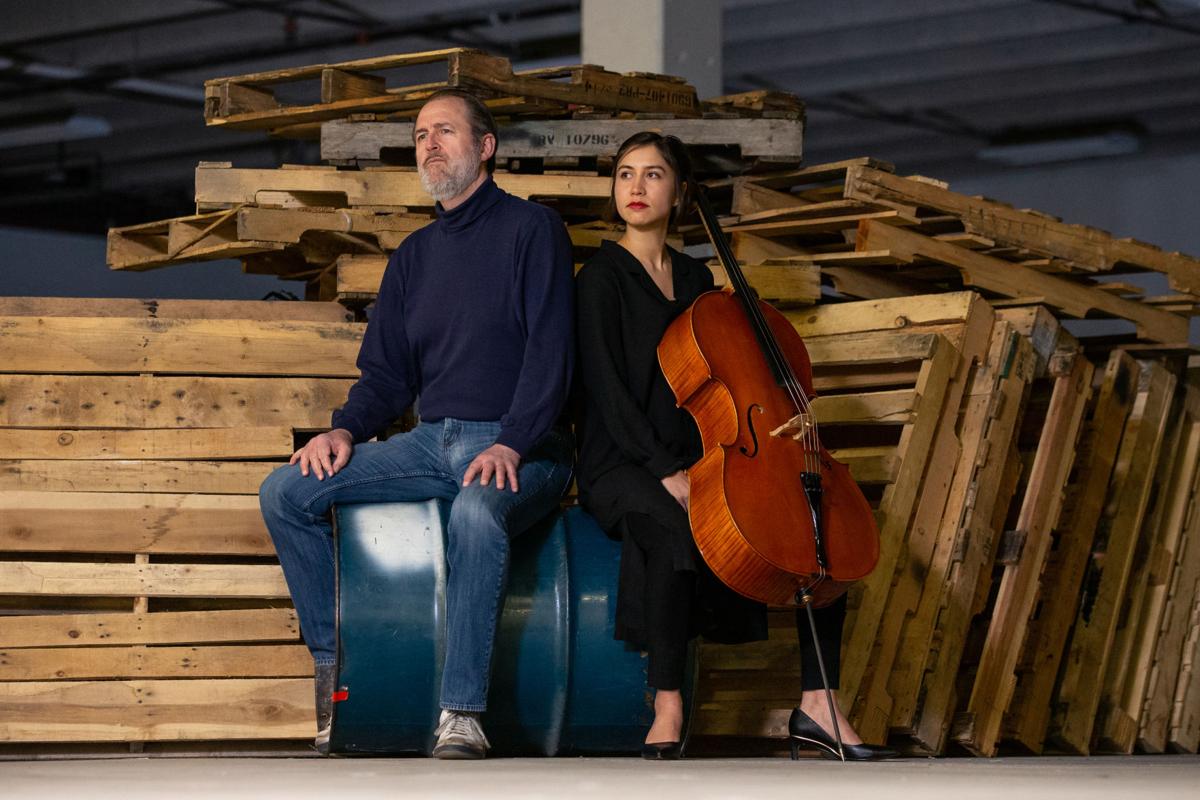 TheatreWorks' “An Iliad” was canceled due to the coronavirus. Photo by Isaiah J. Downing 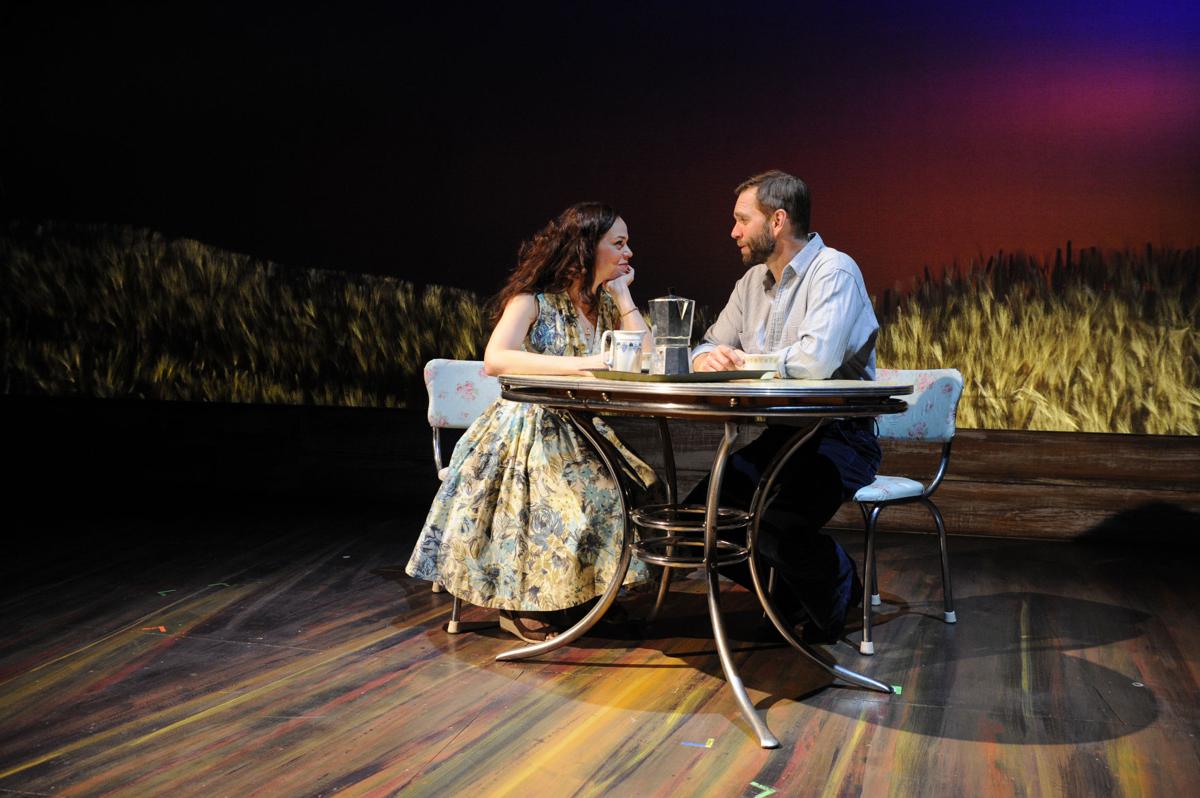 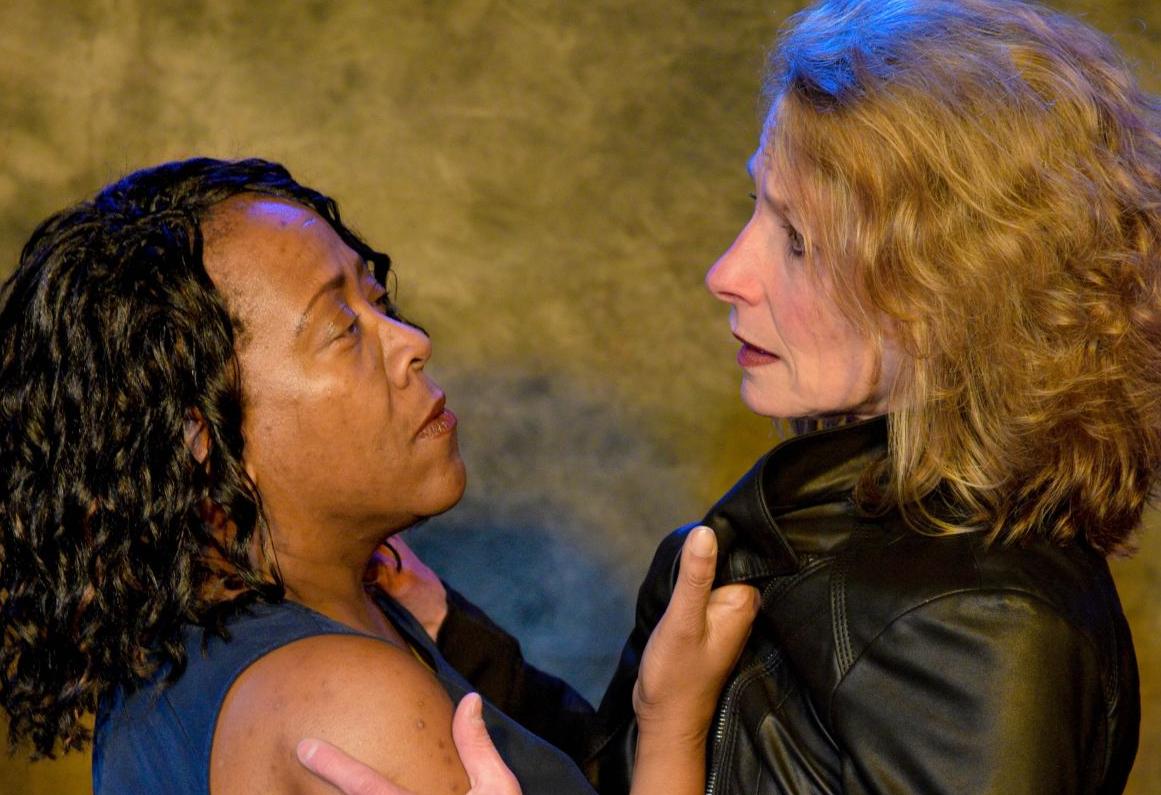 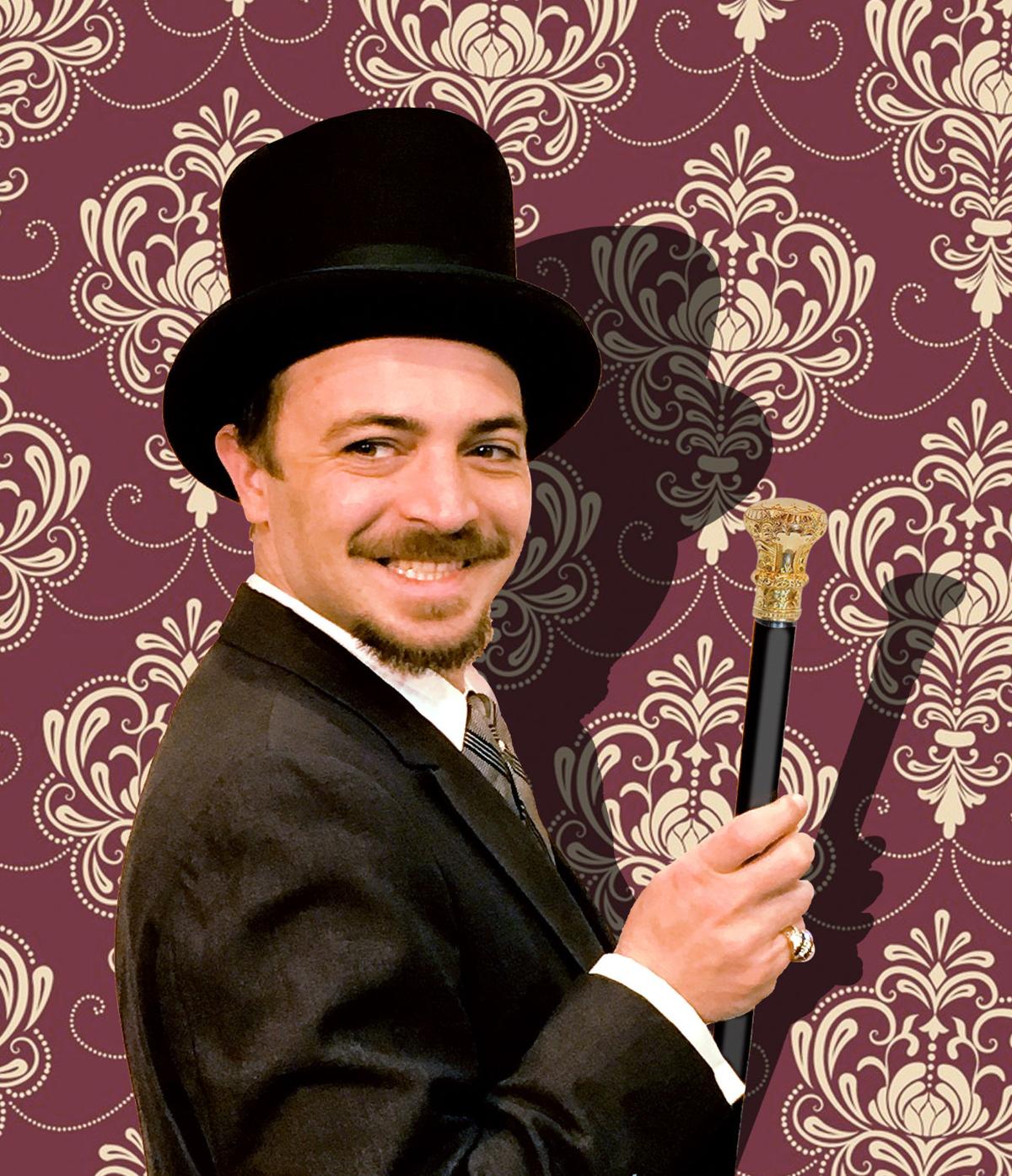 Michael Lee starred in “Notorious Nugget” at Millibo Art Theatre. The show was canceled after its first weekend.

TheatreWorks' “An Iliad” was canceled due to the coronavirus. Photo by Isaiah J. Downing

Michael Lee starred in “Notorious Nugget” at Millibo Art Theatre. The show was canceled after its first weekend.

A new, unwanted star has butted its way onto local theater stages.

Its name is COVID-19, and it’s getting the poorest of reviews.

After forcing theater companies to shutter productions, including “An Iliad” at TheatreWorks, the professional theater company of the University of Colorado at Colorado Springs, “The Vagina Monologues” at Funky Little Theater Company, and “The Notorious Nugget” at Millibo Art Theatre, the virus is now prompting those companies to do what they do best — get creative.

This is how TheatreWorks artistic director Caitlin Lowans found herself, for the first time, holding callbacks over Zoom, a remote conferencing platform, for this summer’s annual Shakespeare at the Ranch production of “Twelfth Night,” set to open July 8, and the sophomore year of its free series of Shakespeare performances around the Pikes Peak region.

“We Zoomed into their rooms, bedrooms, living rooms,” says Lowans, who is also trying to find a spot for “An Iliad” in TheatreWorks’ next season. “The best lighting was outside on his porch for one guy. Some had roommates or partners, so they had someone to read scenes with them. Some were self-isolating, so I’d read the scene with them across the Zoom camera.”

What she initially thought might be a disaster turned out to be the opposite. She was able to help actors find the best camera angle and lighting and manage the nerves that accompany auditions even in the best of times.

“I sent everyone a reminder to be generous with themselves,” says Lowans. “And we would be generous with them. And to think of this as a time when there’s a lot of uncertainty and unknowns, and we’ll just spend 20 minutes together reading Shakespeare and listening to some beautiful poetry and hope for the best for each other.”

Another heartbreaking cancellation was the popular Tony Award-winning musical “Hair,” by the UCCS Theatre and Dance Program. The 50-person cast was set to open March 12, but never got the chance to sing one lyric of “Aquarius.”

“It’s a bittersweet end to my seniors’ college theater career. But unforgettable,” says director and UCCS associate professor Kevin Landis. “We’d never done something this big and the show has so much resonance for all of us. And our show completely sold out before it opened. Every seat. Colorado Springs. I don’t think that’s ever happened for us.”

In the aftermath of overnight closures and the cancellation and postponement of upcoming shows, theaters are scrambling to figure things out. It all happened so quickly, they haven’t even been able to sit and grieve.

“Culturally, we were all thrust into this place last week where everything is different than the week before,” says Springs Ensemble Theatre President Matt Radcliffe.

“We haven’t allowed ourselves the space to become comfortable with what it is. There’s been no space to mourn the loss of what we had before.”

As with several companies, SET immediately explored livestreaming their productions. That’s the plan for their next production, “White,” which was scheduled to open May 7. Best case scenario right now is to open May 21, either livestreamed or with a live audience, if that becomes a possibility.

The all-volunteer company will be able to weather the virus-induced downtime, says Radcliffe. Other small companies, though, might have a tougher time while stages are dark, such as The MAT and Funky Little Theater Company.

The MAT intended to use its “Nugget” production, an original melodrama/musical by Colorado Springs playwrights Mark and Lauren Arnest, as a fundraiser for the theater. After it was canceled after one weekend of shows, Jim Jackson, the show’s director and also the theater’s co-founder and artistic director, looked into livestreaming or recording the show. However, one of the actors had a contract through Actors’ Equity Association that prevented it from happening. Jackson hopes to revive the show in the fall.

In the meantime, they’ve launched a new fundraiser asking people to donate $109 to match the 109 seats inside the Ivywild theater.

“The response has been amazing so far,” says Jackson. “That gives us hope. It will help us get through April and May. We have essentially put April on hold. And we’re being optimistic about May.”

Chris Medina, founder of Funky Little Theater Company, was hit with a virus double whammy. The recommendation to dissemble large groups of people hit right as “The Vagina Monologues” opened, and while opening night did go on, he decided to cancel the rest of the sold-out run — a big kick in the knee for a theater. That same weekend, Medina’s wife gave birth two months early, prompting them to spend a large chunk of time in the hospital, but minus the friends and family who might have been able to visit if it weren’t for COVID-19 restrictions.

He’s now canceled their May show, “Vanya+Sonia+Masha+Spike,” but hopes to keep alive “The Waverly Gallery,” which was set to open March 27, as sets were built, actors were off-book and the message of the play about a grandmother with dementia seems timely, given the senior population’s vulnerability to the virus.

“To cancel that show would hurt my heart,” says Medina. “That was too much for me to let that one go. I put it on the back burner.”

Medina also is about to hold auditions for Funky’s big summer musical, “We Will Rock You,” a jukebox musical based on the songs of British rock band Queen. More than 60 people are signed up for April 5-6 auditions, but nobody has canceled yet. If need by, he’ll push forward with social distancing constraints: one actor in the room at a time with Medina and the music director. If it’s not possible at all, he’ll resort to video submissions.

“People are scared,” he says, “but also, creative people are getting stir crazy.”

Along with its contemporaries, Colorado Springs Fine Arts Center at Colorado College’s Theatre Company is offline at least through April 17. They suspended “The Miraculous Journey of Edward Tulane” midrun, and canceled mainstage production “Silent Sky” and “Men on Boats,” a collaboration between the FAC and CC academic departments.

“We’re working a lot to try and think of potential online interactive content,” says Levy. “We’re exploring the rights to stream recent shows and thinking about how can we reopen and get people back. That’s what we want to do.”

That’s a big thing for companies right now — figuring out how to stay in front of their audiences so people don’t forget about them.

“There are so many great opportunities to experience art in a different way,” says Lowans. “For local performing arts organizations and local visual institutions, we’re not only here to provide art, but community and shared space. What does that look like when the space can’t be physical anymore?”

Over at the MAT, Jackson and MAT co-founder Birgitta De Pree are conjuring up alternative plans, including cyber busking (performing in public places for tips); a daily livestream comedy event with Babette Matdiva, a character by De Pree; and Sad Cafe, an online bit featuring one table, one chair, a waiter who stands 6 feet away and guests who’ll provide a hopefully comic take on current affairs.

“There are lots of things we’re kicking around,” says Jackson. “You sort of adopt a life jacket to keep your head above water approach.”

Starz Theater Company, a division of Turning Pointe School of Dance, was forced to postpone its spring audition workshop. The organization provides students with theatrical and vocal training and dance technique.

Starz Producer Carmen Swank is trying to find the silver linings in the pandemic.

“It’s caused us to look at our calendar over the next 12 months leading into next season,” says Swank. “This lends itself to pivoting and make any changes we want to make. I try to take a positive lens in whatever hurdles we face. I’m asking our team what opportunities are here. Let’s not miss the gifts.”

Whatever the future might hold, Levy knows one thing for sure.

“Theater is the oldest institution and it survives everything. I’ve been super impressed from a national and worldwide level, with all artists and how they’re coping and still managing to create art.”

At 8 months pregnant, Colorado Springs mom is anchoring the news from home. It's all 'overwhelming'

KOAA morning anchor Brie Groves is juggling working from home in Colorado Springs, being a mom and being pregnant during the coronavirus pandemic.