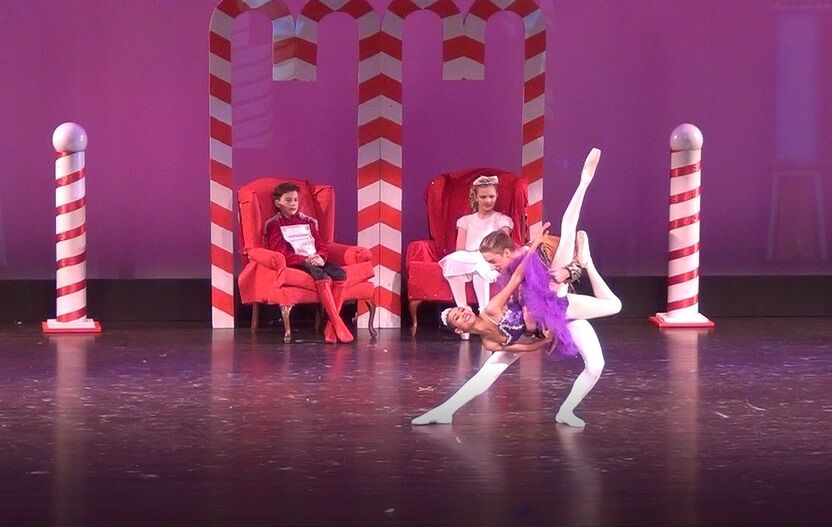 About 60 students from Rachael’s School of Dance will perform “The Nutcracker” on Saturday at Ent Center for the Arts. It was rescheduled from December.

Rachael’s School of Dance will perform “The Nutcracker” Saturday at the Ent Center for the Arts. Courtesy Rachael Aragon

About 60 students from Rachael’s School of Dance will perform “The Nutcracker” on Saturday at Ent Center for the Arts. It was rescheduled from December.

Rachael’s School of Dance will perform “The Nutcracker” Saturday at the Ent Center for the Arts. Courtesy Rachael Aragon

It’s never the wrong time for “The Nutcracker.”

At least, that’s what Rachael’s School of Dance director Rachael Aragon believes. About 60 of her students, from ages 2 to 19, along with a couple of adults in their late 60s, will perform Tchaikovsky’s classic 1892 ballet Saturday at Ent Center for the Arts. The show was rescheduled from December due to COVID-19.

“A lot of ballets don’t include young children because it’s a lot of work,” says Aragon, a classically trained dancer, about the importance of “The Nutcracker.” “I want my students to have that performing experience, that love for the classics. Without a performance opportunity to act out the roles of Giselle, Don Quixote, ‘The Nutcracker,’ you don’t get a feeling for it.”

This year’s production — the school’s 18th consecutive “Nutcracker” in its 18 years of existence — was particularly challenging. Rehearsals were limited due to the number of students who could be in the studio, so Aragon moved them to a combination of in-person and over Zoom. To work on the partnering parts between pairs of dancers, she scheduled private rehearsals. Dancers learned the choreography in December and have regularly run through it since then to keep the show fresh for Saturday’s performance.

“Dancing is insanely anaerobic a lot of times,” Aragon says. “And they’re wearing masks. It’s difficult for the kids to maintain the oxygen capacity and still put out what their bodies are supposed to put out. They’ll have to take a deep breath outside and come back in. They’re doing amazing.”

Expect a very traditional production. Aragon isn’t a fan of people contemporizing or changing up the classical ballet. She’s passionate about sticking with the original 1900s choreography by Russian choreographer Marius Petipa, though she adjusts the movements for her young students.

Before the show is a featurette of songs from the movie “Frozen 2.” The 15- to 20-minute performance shows off the school’s ballroom, jazz and tap students.

Some of Aragon’s students have gone on to dance with professional companies and get accepted into prestigious training schools, such as the Joffrey Ballet School.

“I train them as if they want to become a professional dancer,” she says. “I’m strict that way, but I want them to gain a love for the ballet and the arts and taking care of the body. I love dance more than anything. That gift was given to me as a young child, and I feel like it’s my duty to pass it along.”

What: "The Nutcracker" by Rachael's School of Dance

Something else: 50 tickets sold per show, masks required for audience members

Native American artist Anna Tsouhlarakis is behind the new exhibit, "To Burn or to Bind" at the Fine Arts Center in Colorado College.

WWE star Goldberg gets tough in helping Texans in need

Hulu sets Mike Tyson miniseries, but the boxer punches back