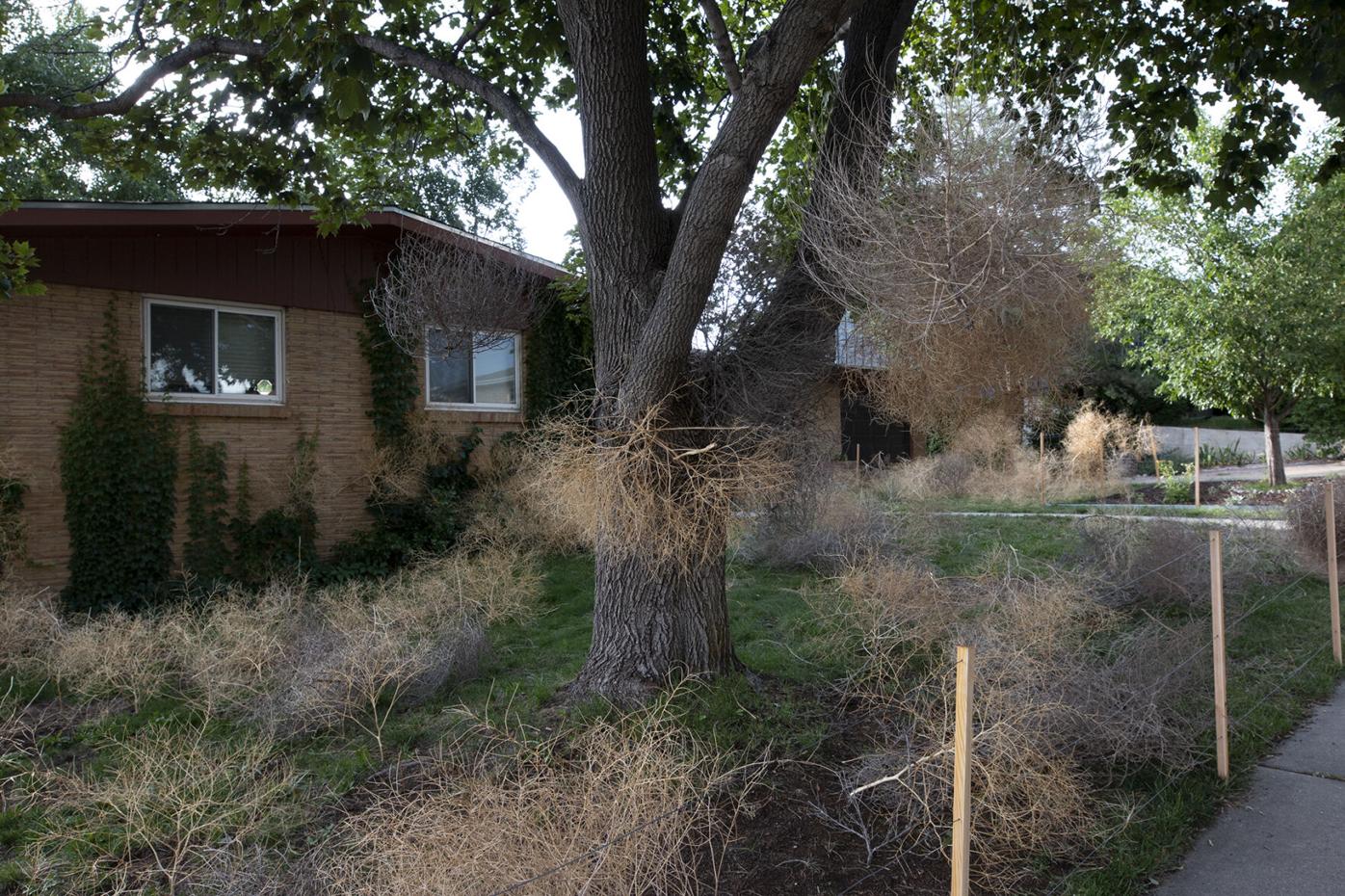 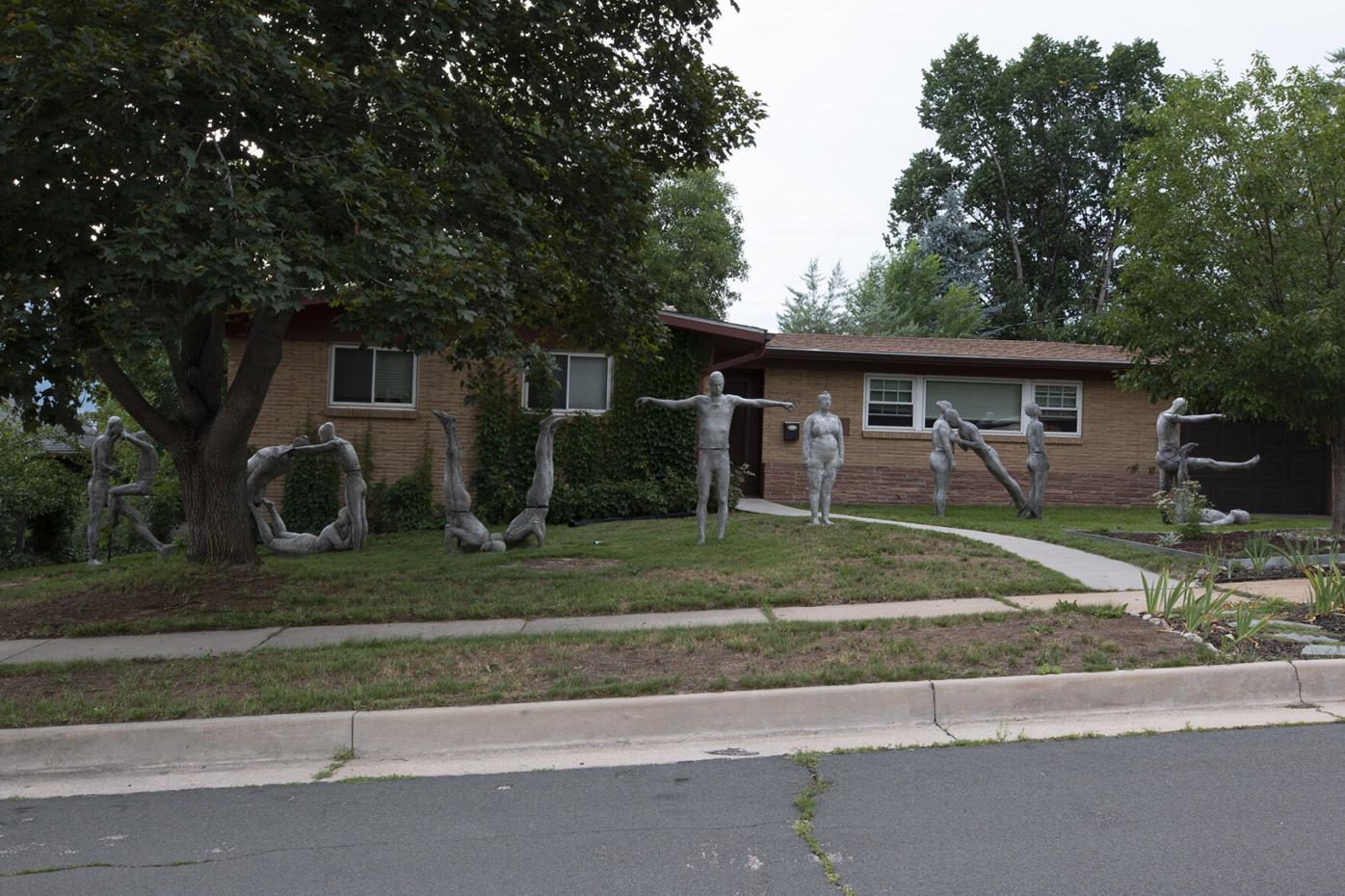 David Grainger's "Shareholders (Routine)" featured life-castings of people contorted into the letters that created the word routine in "The Yard," a public art site by Jessica Langley and Ben Kinsley. Courtesy The Yard and David Grainger 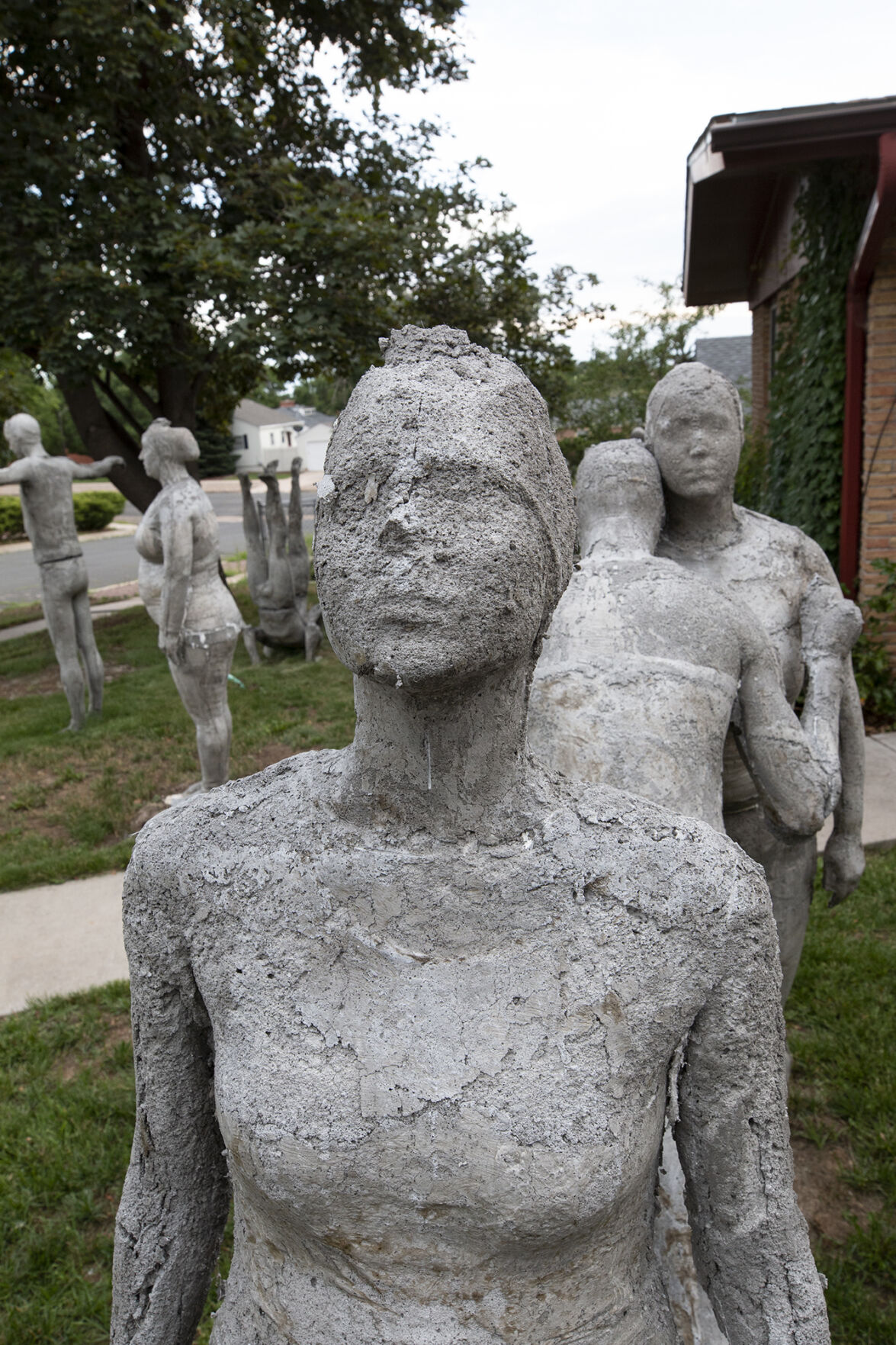 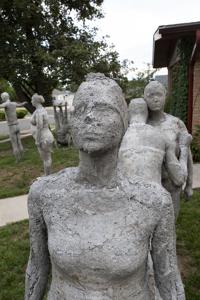 David Grainger’s “Shareholders (Routine)” featured life-castings of people contorted into the letters that created the word routine in “The Yard,” a public art site by Jessica Langley and Ben Kinsley. 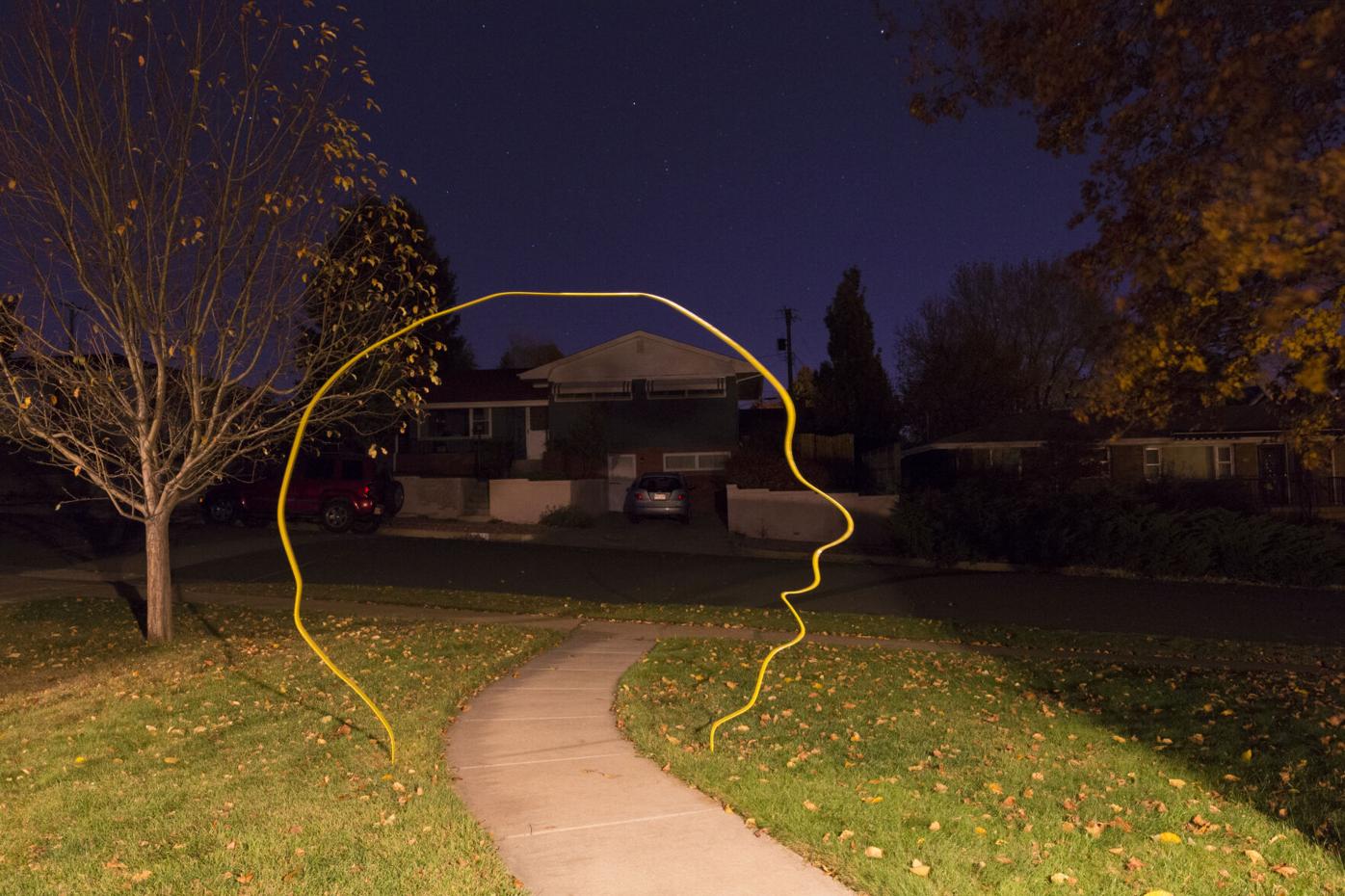 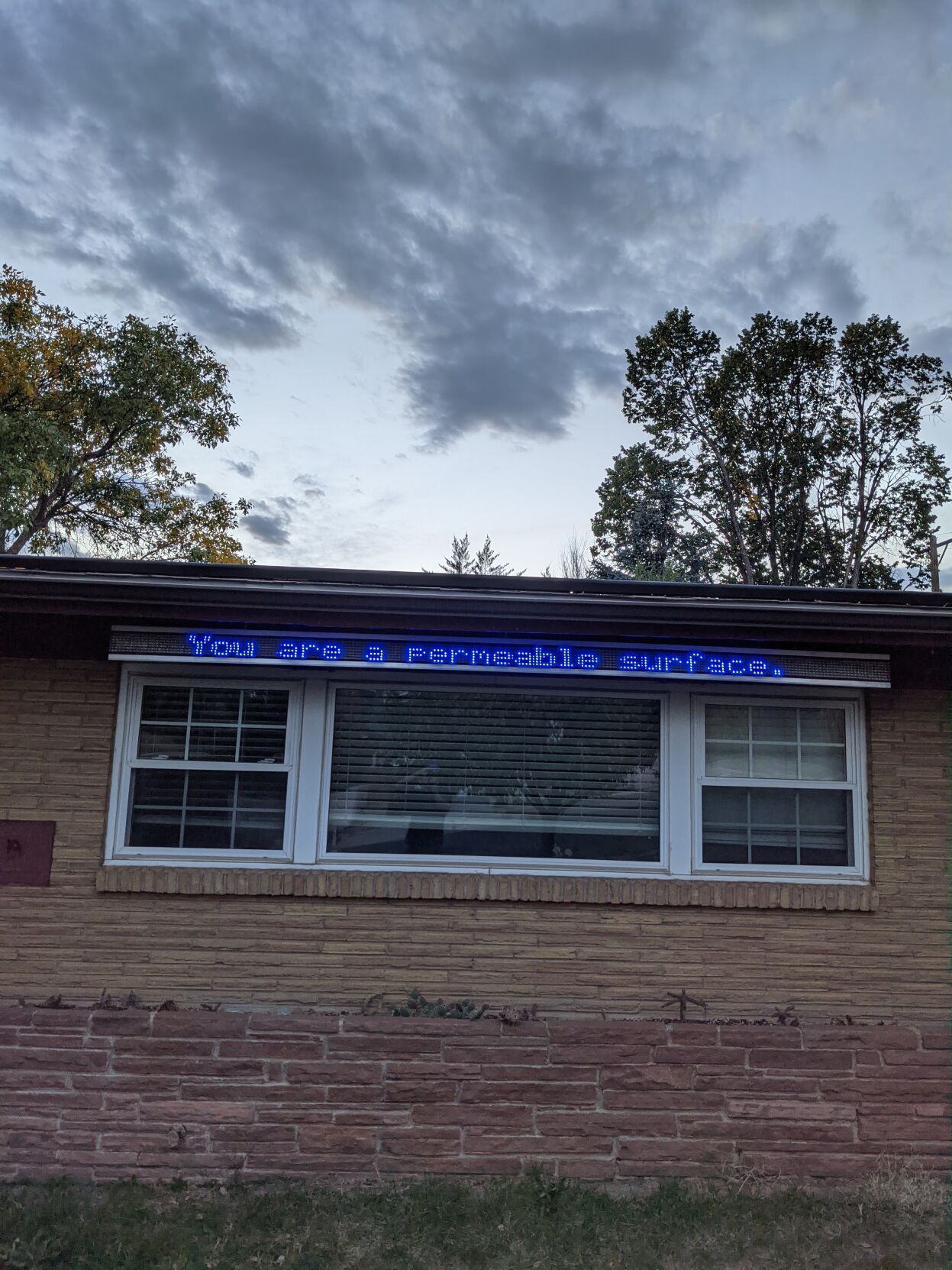 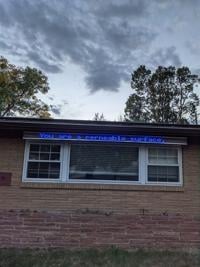 "Notes for Tomorrow" is Jessica Langley and Ben Kinsley's ninth exhibit for "The Yard," their outdoor project space and site for public art in their downtown Colorado Springs front yard. Jody Joyner was also part of the project. Courtesy The Yard

David Grainger's "Shareholders (Routine)" featured life-castings of people contorted into the letters that created the word routine in "The Yard," a public art site by Jessica Langley and Ben Kinsley. Courtesy The Yard and David Grainger

David Grainger’s “Shareholders (Routine)” featured life-castings of people contorted into the letters that created the word routine in “The Yard,” a public art site by Jessica Langley and Ben Kinsley.

"Notes for Tomorrow" is Jessica Langley and Ben Kinsley's ninth exhibit for "The Yard," their outdoor project space and site for public art in their downtown Colorado Springs front yard. Jody Joyner was also part of the project. Courtesy The Yard

Those who stroll down North Logan Avenue never know what awaits them in the art gallery formerly known as Jessica Langley and Ben Kinsley’s front yard.

First there was the large yellow outline of a head in profile across the sidewalk to their front door by North Carolina artist Jerstin Crosby. It was called “Untitled (Current Mood),” and resembled the line-drawn caricature of Alfred Hitchcock on his TV show “Alfred Hitchcock Presents.”

Then there was the time Fort Collins artist David Grainger created life-size castings of people contorted into the letters that made up the word “routine” in “Shareholders (Routine).” You can see photos of past exhibits online at whatsintheyard.com.

“People asked all kinds of questions,” says Langley. “People would drive by and come to a screeching halt in front of the house.”

“We’d be drinking coffee and people would be in our yard in-between the figures taking pictures,” adds Kinsley. “People were sad when it was gone.”

Nowadays there aren’t any giant installations, such as the wire-fenced corral of tumbleweeds in Riitta Ikonen’s “Untitled (Hairy Panic),” which made the couple’s neighbors a smidge nervous last fall.

“The tumbleweed one was challenging for people because it didn’t look clean,” says Langley. “It was messy.”

“They thought it would be a fire hazard,” says Kinsley. “The wind blew them all over the yard, but in the corral.”

“Only a couple escaped,” adds Langley.

But if you happen to walk through the downtown Divine Redeemer neighborhood anytime through January, you’ll be treated to a few rays of hope via a 12 feet-long, scrolling LED sign that adorns the front of their house. It cycles positive messages all day long, or whenever the couple wakes up or goes to bed at night and turns it on and off.

“The arc of the moral universe is long, but it bends toward justice” — Martin Luther King, Jr., reads one message. “Someone got excited about mushrooms today,” reads another. “I hope for more dance breaks,” says a third.

“Notes for Tomorrow” is the couple’s ninth exhibit for “The Yard,” their outdoor project space and site for public art. Along with fellow collaborator Jody Joyner, they solicited the community to mail them letters or postcards with messages of hope for the future. The installation went live in early October and messages change weekly. By mid- October they’d received about 50 pieces of mail, including packets of individual messages from an elementary school and the University of Colorado at Colorado Springs Office of Sustainabilty. You can still mail words of hope to: 1010 N. Logan Ave., C/S, 80909.

The exhibit also was a way to address the troubles of the U.S. Post Office, which was making headlines as they planned their project.

“In this moment it’s tough to think about the future,” says Kinsley. “The day-to-day is overwhelming. People said it’s hard to come up with something hopeful right now. It’s forcing people out of the present experience and to reflect.”

The couple moved to Colorado Springs three years ago from New York, after Kinsley got a job as an assistant professor in the visual and performing arts department at UCCS. In their previous life, they’d worked in gallery spaces. When one was shuttered, Langley decided to open their own space on the laundry line in the back courtyard of their apartment building. Interested viewers made appointments to view the exhibit through their third-floor kitchen window.

“It was a space where we could learn about our neighbors through personal effects they would put on the line,” says Langley.

“I wanted to do something that was also communicating something to my neighbors, but in a nonverbal way. The only stipulation was work could be out in any weather and not weigh more than a wet load of laundry.”

When they got to Colorado, they wanted to create a similar energy and use their private space in a public way to create a form of noninstitutional public art. It’s art not funded by city government, nor is there a committee choosing what fills the space.

They did receive a grant from the INSITE Fund, through Denver’s RedLine Contemporary Art Center and The Andy Warhol Foundation for the Visual Arts. It allows them to now provide artists with an honorarium and money for materials and travel. The first seven exhibits were funded by the artists.

“The Yard” also is a way to build more community in the front of the house, versus the back, where the couple says they’ve noticed most people spend their time, perhaps to gaze at the mountains.

“The viewers might just be passersby and they might engage with it and not even know it’s art, which they don’t need to,” says Langley. “When we can create situations for people to be maybe a little confused, and they can’t quite put it in a box, that’s a really rich creative area for everyone to be able to experience.”

For Colorado Springs artist, a life of ups and downs has led to high honors

A Colorado Springs-based artist has been inducted into the Society of Illustrators Hall of Fame.