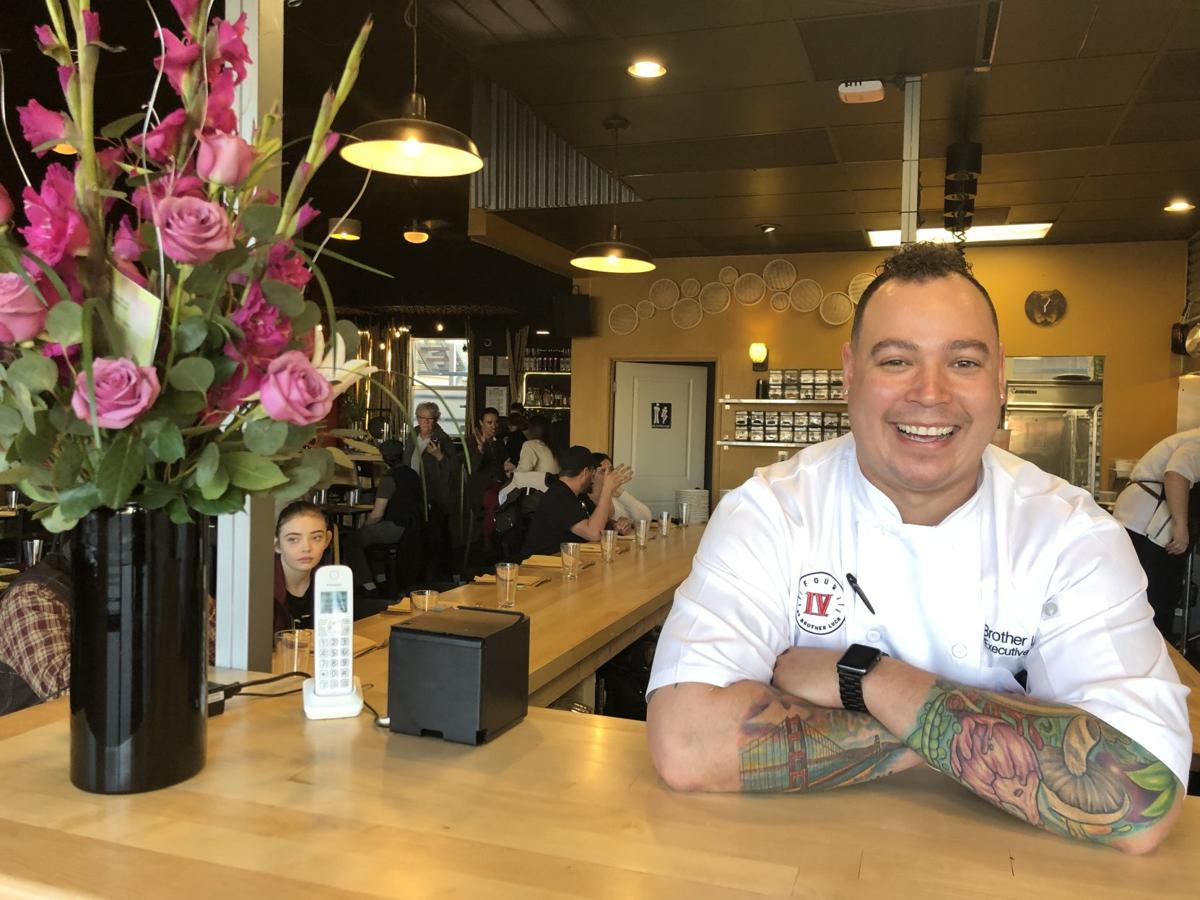 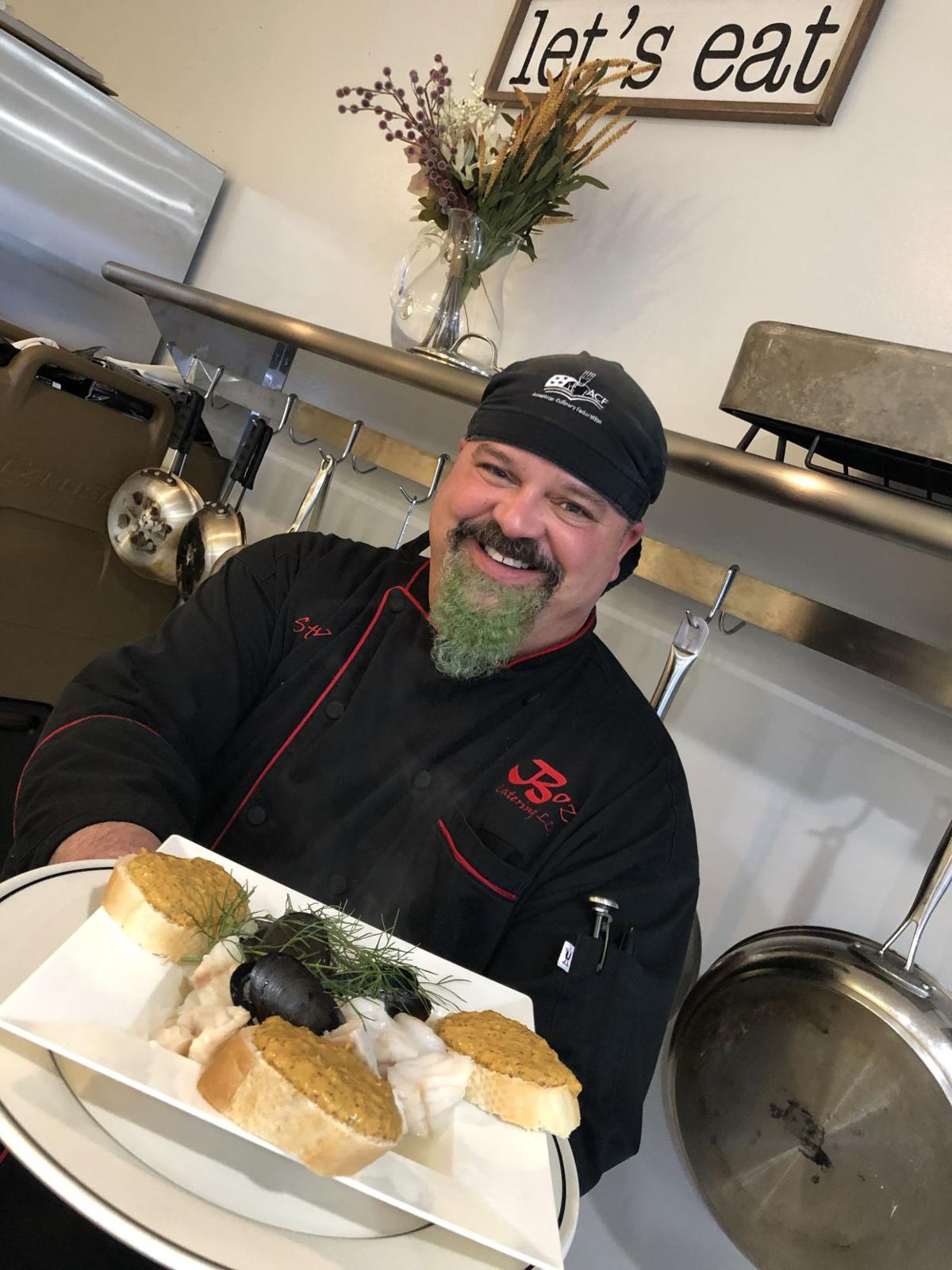 Eric Stewart, owner of Boz Catering Kitchen, offers a Chef’s Table every other Friday when he prepares dishes such as bouillabaisse with rouille-topped toast points.

Eric Stewart, owner of Boz Catering Kitchen, offers a Chef’s Table every other Friday when he prepares dishes such as bouillabaisse with rouille-topped toast points.

This time it’s Lucky Dumpling, 26 S. Wahsatch Ave., where he puts his signature creative culinary skills to work making an Asian-American fusion dim sum menu. He has focused on keeping the dishes to a short list of reasonably priced offerings.

You’ll love dining here in the open, colorful, smartly decorated environment. The choice seat is at the counter facing the open kitchen, where you can catch the cooking action. At the back is a small tiki-like bar, with a sophisticated, Asian-influenced beer and spirits menu and craft cocktails shaken.

Hours are noon to 10 p.m. Mondays through Thursdays, noon to midnight Fridays and Saturdays and noon to 9 p.m. Sundays. Details: 418-5843, luckydumplingco.com (coming soon).

A Grazing Life has released the chef lineup for this season’s farm dinners. Tickets go on sale April 1. The popular events sell out quickly. This year, the dinners will be at Frost Farm & Livestock Co., well-known in the community for its sustainable farming practices raising 100 percent grass-fed beef and lamb, and organic produce. Some of the top-notch chefs will prepare amazing meals in an outdoor kitchen including: David Patterson, executive chef at The Broadmoor; Mario Vasquez, executive chef at Colorado Craft; and Jay Gust with Dylan Montanio of Smorbrod. Visit agrazinglife.com.

Two new Poké Bop — Bowl-N-Roll fast food shops will open at 4707 N. Academy Blvd. and 9 S. Tejon St. The Dallas-based chain serves the Hawaiian specialty poké (pronounced “po-kay”), which is cubed raw seafood served over rice and veggies. As a nod to Texas and Tex-Mex food, they also offer Poké-ritto, which is an oversized sushi roll sliced into pieces and eaten like a burrito. According to the company’s website, fresh bowls can be prepared in three minutes and are priced at about $11.95. Asian beers, sakes, sparkling wine and rosé by the bottle also are offered. Visit ilovepokebop.com.

Dinner with a caterer

Eric Stewart, owner of Boz Catering Kitchen, 6628 Delmonico Drive, offers a Chef’s Table every other Friday evening. He has four (60-minute) seatings starting at 4 p.m. Cost is usually $20 per person depending on the menu.

At his recent “Night in Provence, France,” the cost was $40 for a three-course menu with Côtes de Provence Rosé. It was worth every penny. Courses included ratatouille served with tapenade bruschetta, bouillabaisse with rouille-topped toast points and tarte tropezienne. While Stewart cooked and served the meal, we got a cooking lesson too.

The ratatouille was pretty much textbook with the exception of Stewart smoking the eggplant, which made the vegetable stew more delicious. His seafood bouillabaisse was brimming with mussels, grouper and red fish from Mamma Pearl’s Cajun Kitchen and Seafood Co., which already was my go-to for shrimp but now will be my top choice for other seafood too. The dessert was an egg-and-butter-rich brioche dough, rolled into a free form round, washed with egg, speckled with pearl sugar and baked. Stewart gilded the lily by slicing the cake wedges in half and spreading a thick layer of custard between the wedges.

It was a decadent meal, plus we took home leftovers for lunch the next day. Reservations recommended at 599-8109 or bozcatering.com.

For years, I had a simple weekend routine for baking whole wheat bread. Every Friday morning, I dutifully fed a starter, which would be used i…