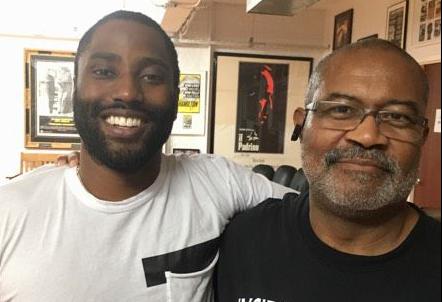 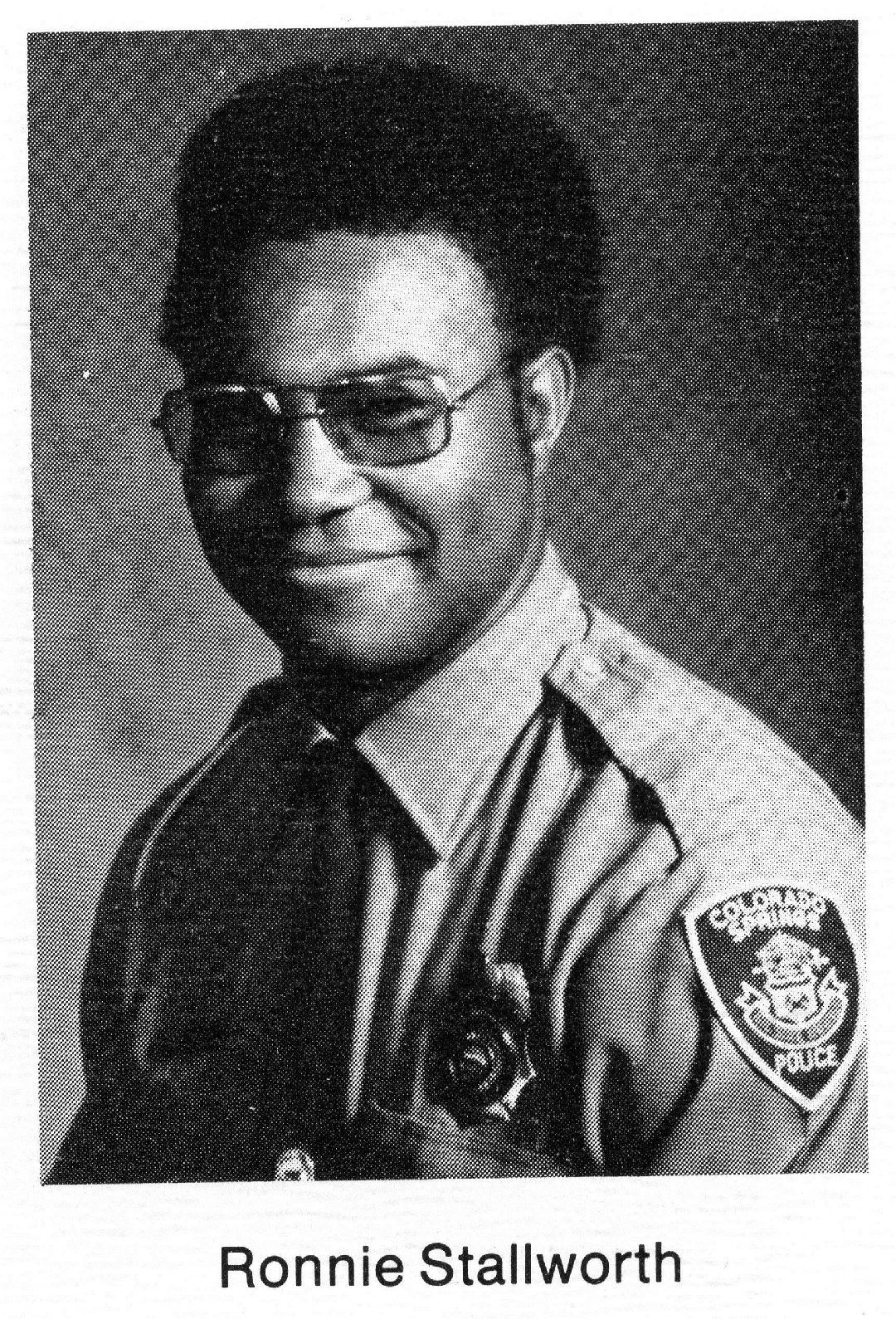 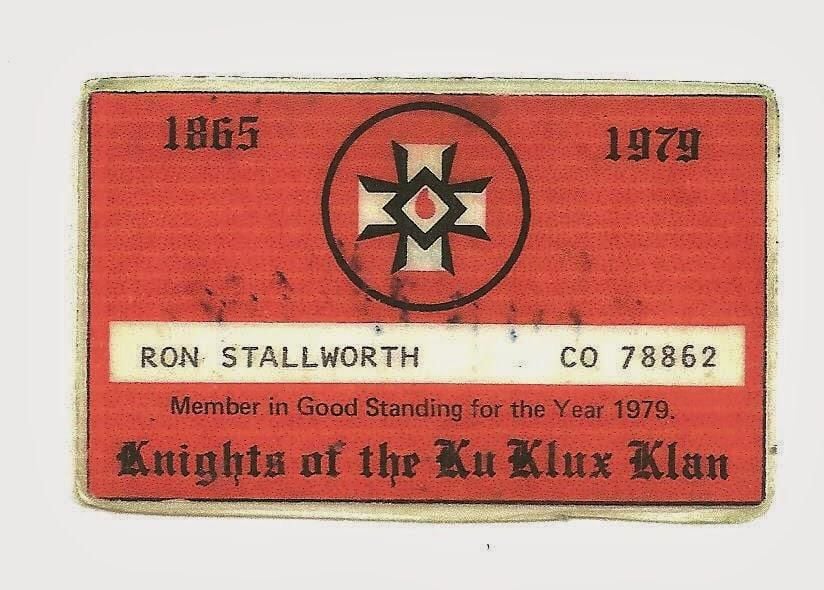 To prove the 7 1/2 months he spent infiltrating the Ku Klux Klan undercover, Ron Stallworth continues to carry the identification card he received in 1979. 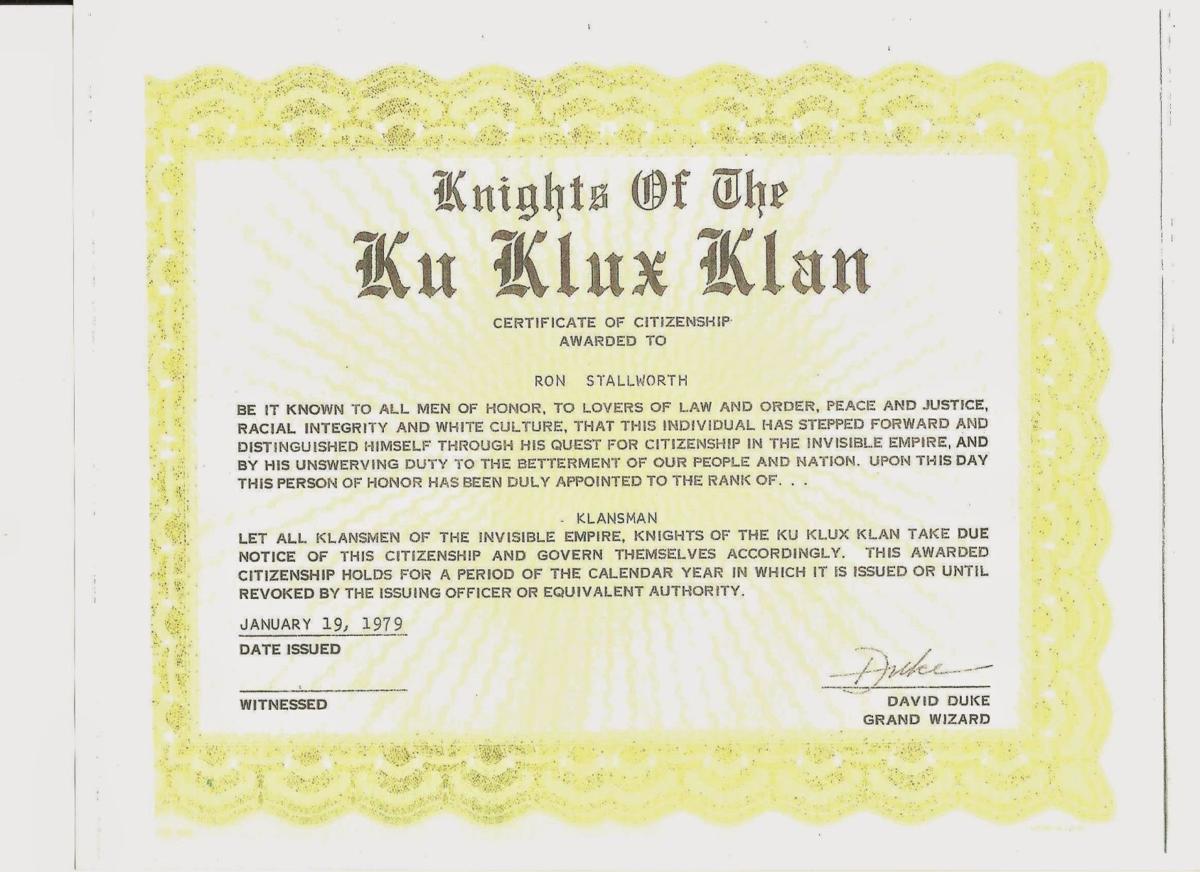 The “grand wizard” David Duke signed this certificate, honoring Ron Stallworth as a “knight” of the group. 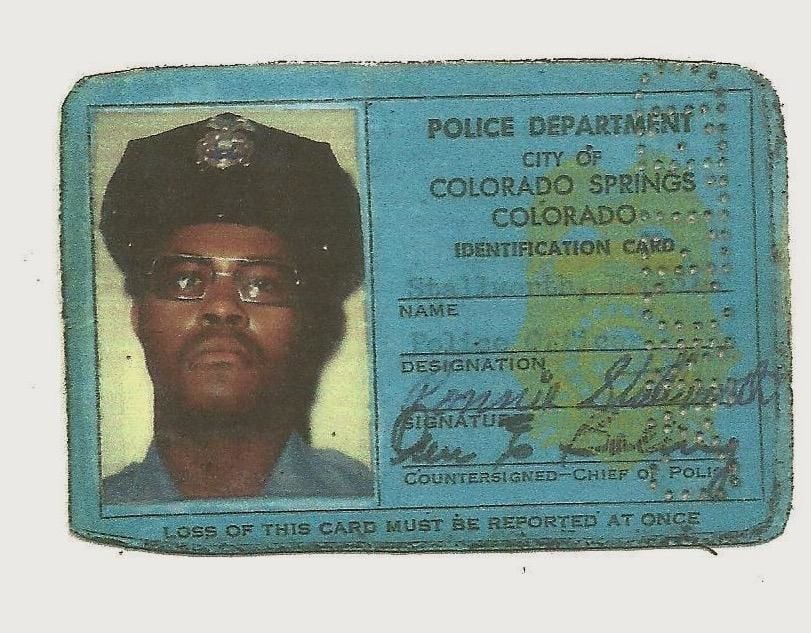 Ron Stallworth’s identification card with the Colorado Springs Police Department. He became the department’s first black detective in the 1970s. 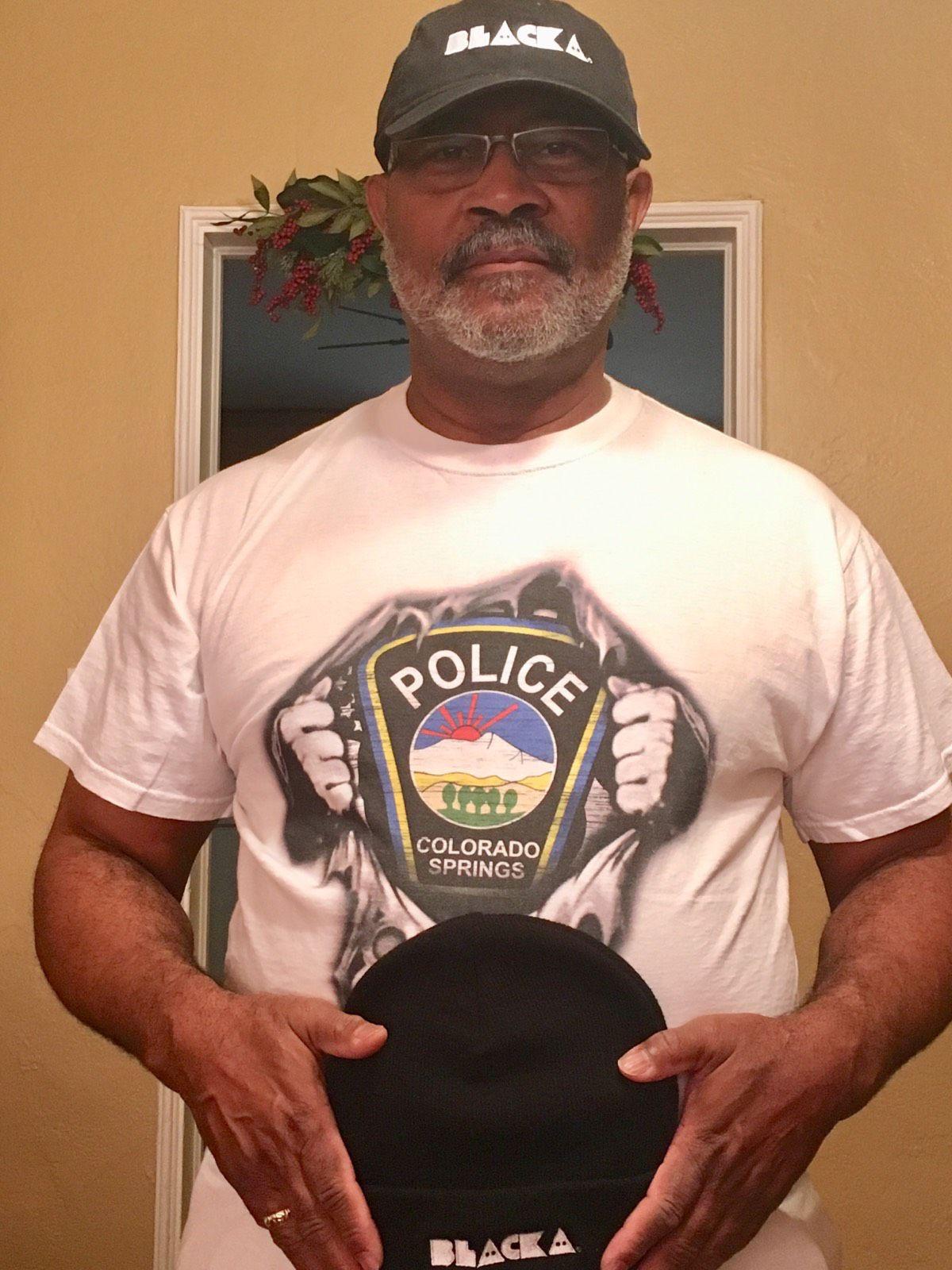 Ron Stallworth in a Colorado Springs Police shirt and hat for the upcoming film “BlacKkKlansman.” The hats were a Christmas gift from the director, Spike Lee.

To prove the 7 1/2 months he spent infiltrating the Ku Klux Klan undercover, Ron Stallworth continues to carry the identification card he received in 1979.

The “grand wizard” David Duke signed this certificate, honoring Ron Stallworth as a “knight” of the group.

Ron Stallworth’s identification card with the Colorado Springs Police Department. He became the department’s first black detective in the 1970s.

Ron Stallworth in a Colorado Springs Police shirt and hat for the upcoming film “BlacKkKlansman.” The hats were a Christmas gift from the director, Spike Lee.

Now more than ever, Ron Stallworth is keeping in check who he is, who he really is.

He wasn’t meant for this moment, he knows, this moment of fame for his legendary escapades in Colorado Springs four decades ago.

He wasn’t meant for that first-class flight this summer, courtesy of Universal Studios. From their native El Paso, Texas, he and his wife stayed at a lavish hotel on Sunset Boulevard and were ferried in a limo to a private screening of “BlacKkKlansman,” the Spike Lee joint about how Stallworth, the Springs’ first black detective, infiltrated the Ku Klux Klan.

The movie made its debut at May’s Cannes Film Festival, earning a long standing ovation and high praise. That included the Prize of the Ecumenical Jury, created by Christian filmmakers to honor works that “reveal the mysterious depths of human beings through what concerns them, their hurts and failings as well as their hopes.”

“I asked him what that meant to him,” says his wife, Patsy. “He choked up.”

Leading up to the movie’s wide release Aug. 10, Stallworth has been on a promotional tour. He’s been taking pictures with strangers, seeing his 2014 memoir, “Black Klansman,” on shelves. A month ago he was in New York recording the book’s audio version, and this month he’s scheduled for more press in Brooklyn.

For now, he’s taking a breather in El Paso, in the “little side” of a duplex where he and Patsy live. He’ll ride the media merry-go-round “for as long as I can,” he says. “But I know who I am. I know who my mother raised me to be. I am not a celebrity.”

He is the third child of Betty Stallworth, the single parent who had one more child before moving them out of the projects in Chicago, away from the south side where she grew up scrounging for food. She packed all they had in three boxes and left for a one-bedroom apartment in El Paso.

The eldest child, Lorenia, would look to the hills at night, wondering what the tiny lights were. “Casas de cartón,” a neighbor told her in the largely Mexican neighborhood — cardboard houses.

Hungry people crossed the border, knocking on the Stallworths’ door for work. Betty hired one woman to iron clothes every Saturday, and if she didn’t have money to spare from her two minimum-wage jobs, she would quilt the woman something.

“We grew up knowing fair is fair, and right is right, and people are people,” Lorenia says.

But that walk into high school — that walk past spitting, yelling white people —that wasn’t fair. Don’t look down, Betty instructed her daughter. Look straight or look to the sky, remembering God loves you.

She ordered her kids to graduate. At the same time, she urged them to not be bullied, no matter the consequence.

To the sister who always carried him on her hip, Ronnie didn’t grow up to be the fighting kind as much as he was the inquisitive kind. “He was always the ‘why’ kind. ‘Why such and such?’” Lorenia says. “He always had a question that he had to look into.”

So he would in Colorado Springs, where Betty moved the family to be close to a sister and the mountain serenity.

Stokely Carmichael, the Black Power leader, picked the city to deliver a speech in a black nightclub. The police worried about a riot, so Stallworth was assigned to go undercover for the first time. His telling of the event is a profound glimpse into the “phantom zone” he navigated over a 32-year career.

At the club, Stallworth was a black man inspired by the “fist-pumping, chest-thumping revolutionary clarion call for black empowerment,” as he writes in his memoir. Also, he was a cop sworn to control his emotions, to keep order.

“As a black police officer, you live in two worlds,” he says now. “The black community does not want to accept you, or they reject you, criticize you, find fault with you, because you have chosen to wear a uniform and badge of what they consider an oppressive, occupying force. The white community — and in my case, some of the white officers at that time — they rejected me because they felt I was too black to be amongst them.

“You’re too black for the white community and too blue for the black community.”

Stallworth joined the police force for no noble reason. It was sensible, economical, a way to make money, put himself through college and become a high school P.E. teacher.

Then he learned he was making more money as a patrolman than he would be as a teacher. Also, he says, “I was having too much fun.”

But the “nonconformist at heart,” as he describes himself in the book, hated the uniform. He prefaces this by saying he wore it with pride — he wouldn’t want his fellow officers to think otherwise. But a uniform was simply not his character, and ultimately, he thought he could have more fun as a detective.

“I found it more challenging to have a false identity,” he says, “to literally put yourself in situations where your ability to survive is based on your ability to verbalize your intent, to communicate. It was thrilling to me.”

Most thrilling was the call he got in the fall of 1978. It was the Springs’ KKK leader, responding to a letter Stallworth wrote to the P.O. box listed in the group’s newspaper ad. Stallworth thought he could snag an informational brochure or something, valuable intel perhaps. Instead, he got a call, setting in motion the secret mission.

Stallworth would continue to be the voice over the phone, conning the likes of Fred Wilkens, Colorado’s “grand dragon,” and the “grandest” across the land, David Duke.

Meanwhile, he enlisted a white partner to represent Ron Stallworth at meetings. Chuck is a pseudonym in the book. “This is just about the craziest thing I’ve heard,” Stallworth quotes him as saying in the memoir. “I’m in.”

The investigation went on for almost eight months. Throughout it, Stallworth dated a woman whose mother, an Alabama native, feared for the couple’s lives.

“I didn’t have that fear, so to hear her express those concerns, frankly, I thought it was hilarious,” he says. “But that was her background vs. mine.”

To Stallworth, the Klan was another bunch of schoolyard bullies, though granted, they dressed funnier. They were committing terrorism, and they had to be stopped — especially as he learned how far their tentacles were stretching. The investigation was uncovering the Klan’s connection with other hate groups.

But Stallworth says his chief felt the situation was getting too hot. Stallworth destroyed documents — saving for future proof the David Duke-signed certificate proclaiming Ron Stallworth a “Knight” and the red card identifying Ron Stallworth “in Good Standing for the Year 1979.”

A year later, Stallworth left Colorado Springs, continuing and finishing his career in Utah, where he helped establish a gang task force.

When he retired in 2006, a local reporter asked him to reflect on his proudest moments. The task force was one, but how could he forget about the KKK infiltration?

The reporter listened, stunned. The story went viral, though not to today’s extent with “BlacKkKlansman” on the horizon.

Stallworth is taking the opportunity to spread a message. The KKK is alive and well, he reminds in interviews. It’s no coincidence the movie is coming out on the anniversary of the Unite the Right rally in Charlottesville.

“[H]atred has never gone away,” Stallworth writes in his revised memoir, “but has been reinvigorated in the dark corners of the internet, Twitter trolls, alt-right publications, and a nativist president in Trump.”

Last month, he and his wife traveled not far from their home to protest in the border town where tents kept immigrant children. On Facebook, he’s outspoken about recent instances of police brutality, alienating himself “by choosing not to stand with brother officers,” he says.

“He’s lost friendships,” Patsy says. “But he says that’s fine. He’s not just going to say what they want him to say.”

“I won’t stand idly by,” he says. That’s not the way he was raised.

He was raised to be educated, though his mother couldn’t have dreamed of him getting a college degree, as he did two years before she died. This was a proud moment that Stallworth hasn’t forgotten amid everything else.

He handed her that degree, “and she just sat there and looked at it,” he says, “tears in her eyes.”

"BlacKkKlansman," Spike Lee's forthcoming movie about white supremacy that the director premiered Monday at the Cannes Film Festival, stems from a late-1970s investigation by a black detective with the Colorado Springs Police Department. Lee's latest film was greeted with a standing ovation at the festival. It's set for commercial release in August - on the first anniversary of the deadly violence at white-supremacist rallies in Charlottesville, Virginia, in which a counter-protester was run down by a car and killed.