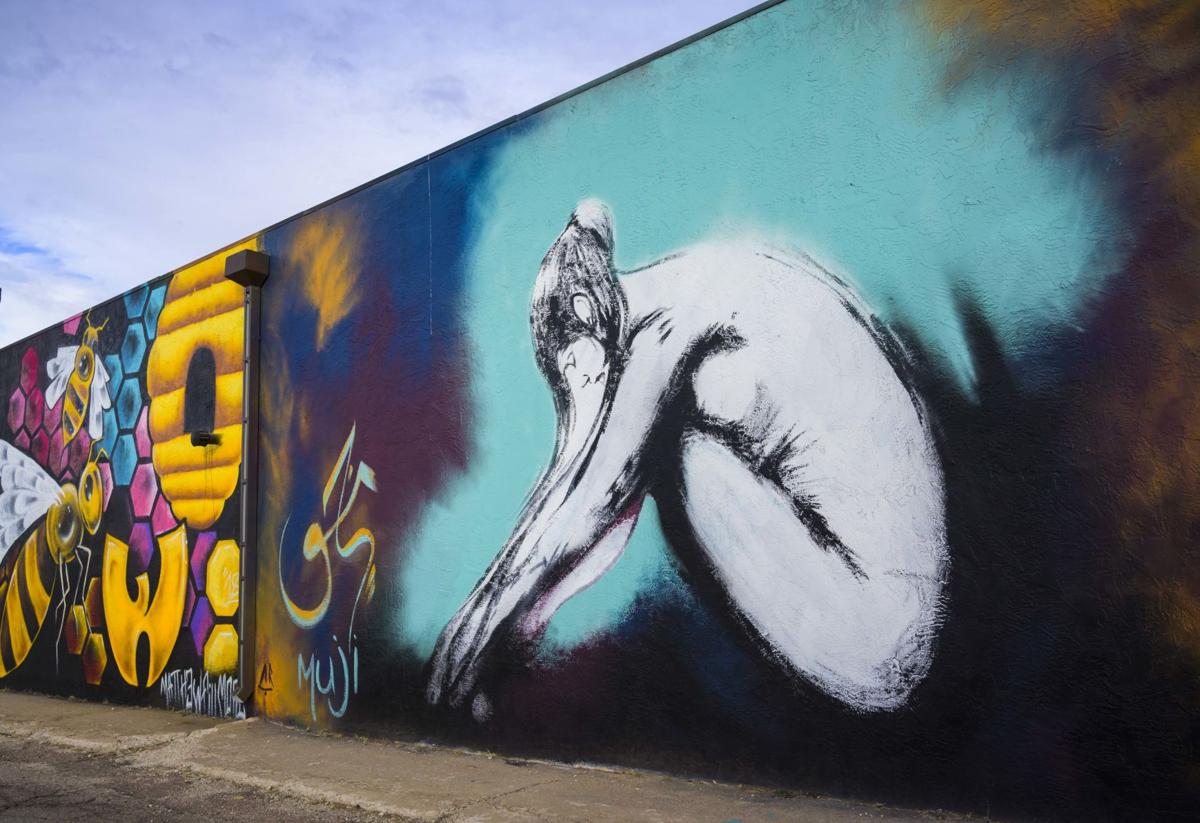 A mural by Muji Rieger stands on the west side of Platte Furniture early this year. A new mural is planned for the wall that could serve as a backdrop for farmers markets and community and bazaar-type events. 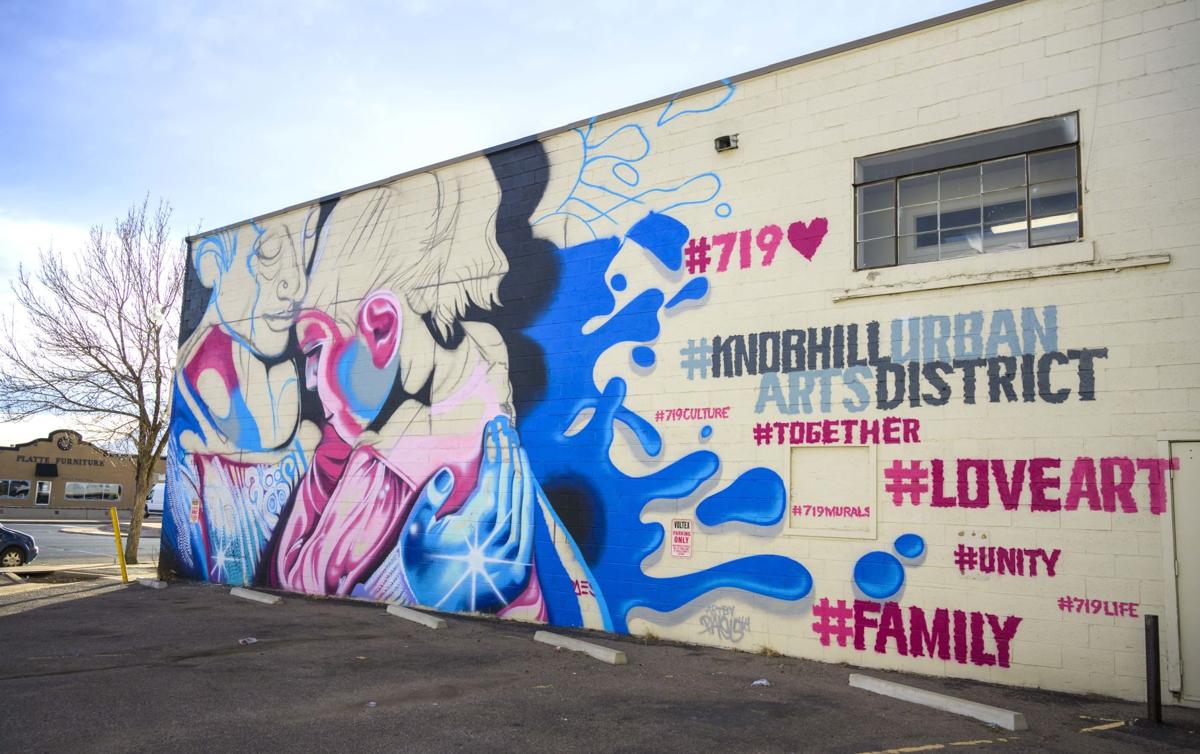 A mural begins to take shape in the Knob Hill Urban Arts District along Platte Avenue in Colorado Springs early this year. The Knob Hill Hills Urban Arts Committee has received a grant for a new mural.

A mural by Muji Rieger stands on the west side of Platte Furniture early this year. A new mural is planned for the wall that could serve as a backdrop for farmers markets and community and bazaar-type events.

A mural begins to take shape in the Knob Hill Urban Arts District along Platte Avenue in Colorado Springs early this year. The Knob Hill Hills Urban Arts Committee has received a grant for a new mural.

Murals, besides adding a colorful splash to a dingy wall, can provoke conversation and stimulate change.

That’s the hope for a new mural planned for the west-facing wall of the Platte Furniture building in the Knob Hill neighborhood, along Platte Avenue between Union Boulevard and Circle Drive.

The Knob Hill Urban Arts Committee, which has spearheaded the surfeit of new murals that have popped up around the often rough and tumble neighborhood in the last couple of years, received a $5,000 grant from the Colorado Department of Public Health and Environment as part of its statewide mural project.

Eight grants were awarded to Colorado artists to paint a mural depicting the findings of the CDPHE’s health and environmental assessment, done every five years in order to shape Colorado’s public health improvement plan.

The grant will finance a project that marries the Knob Hill committee with the Colorado Springs Food Rescue, a nonprofit that has identified Knob Hill as one of three neighborhoods in need of revitalization. One of the city’s oldest neighborhoods, it was also the home of famed inventor Nikola Tesla, who worked in his lab at Kiowa and Foote streets for about eight months, and once notably blew out the city’s power grid.

“It’s a food desert,” said Brian Elyo, a Knob Hill Urban Arts Committee member. “They’re (the Food Rescue) having a hard time getting into the neighborhood and meeting people. It’s a wonky neighborhood.”

Three artists, Muji Rieger, Paes164 and Molly McClure, will paint a mural by the end of the year as a way to engage the community. McClure’s design features a food goddess in the foreground, with an idealized portrait of the Knob Hill neighborhood and Pikes Peak in the background.

“It will celebrate our region’s history and pride around local foods, and rejuvenation of energy around local foods and sourcing things locally,” said Elyo. “We also want to encourage the development of proper grocery stores in that neighborhood.”

The results of the CDPHE’s health and environmental assessment identified seven themes that impact health in a community: behavioral health, education, environment, healthy eating and active living, housing, physical health and transportation. Grant applicants were directed to address those themes in their murals. It’s the first time art was selected as a way to distribute the message.

“Research shows art impacts culture and culture impacts the health of the community,” said Deborah Monaghan, CDPHE’s interim director of the Office of Planning, Partnerships and Improvement. “Residents in communities across Colorado would learn about and know how to get involved in the state’s health and environmental priorities. Each mural will have a link to the health assessment and plan from the state. We’re hoping people will start to connect with that a little more than a printed digital document.”

The mural must be finished by the end of the year, and is required to stay in place for the next five years. It will cover up four murals currently painted on the same wall of the building.

“It’ll be nice, ethnic, Colorado-based, let’s go for it,” said Platte Furniture General Manager Kyle Kelly. “It’s art. I’m fine having a piece that sits there for awhile and helps people get to know our building by that. It’s all positive for me.”

Kelly has watched the neighborhood change for the better over the last few years. He’s not sure if it’s the addition of murals or the departure of certain businesses, such as the Wagon Wheel Lounge nightclub.

“I have had 95 percent less issues with graffiti,” said Kelly. “There have been no people shooting up or bad acts going on. Do I attribute it all to the art? No, but it’s definitely helped. We have less issues of break-ins, vandalism and graffiti. This area is more cleaned up than it has been in the last three or four years.”

Elyo envisions the new mural as a backdrop for farmers markets and community and bazaar-type events. He hopes if people start talking about it, they’ll begin also to talk about redeveloping the area.

“Part of the mission of the committee is to engage the community through art projects,” said Elyo. “Use murals as a way to facilitate conversations and break down barriers, and use art to start talking about issues in the neighborhood. Not to be controversial, but to give people talking points.”

The neighborhood around Platte Avenue isn’t one you’d want to wander through after dark. Or during the day, for that matter.