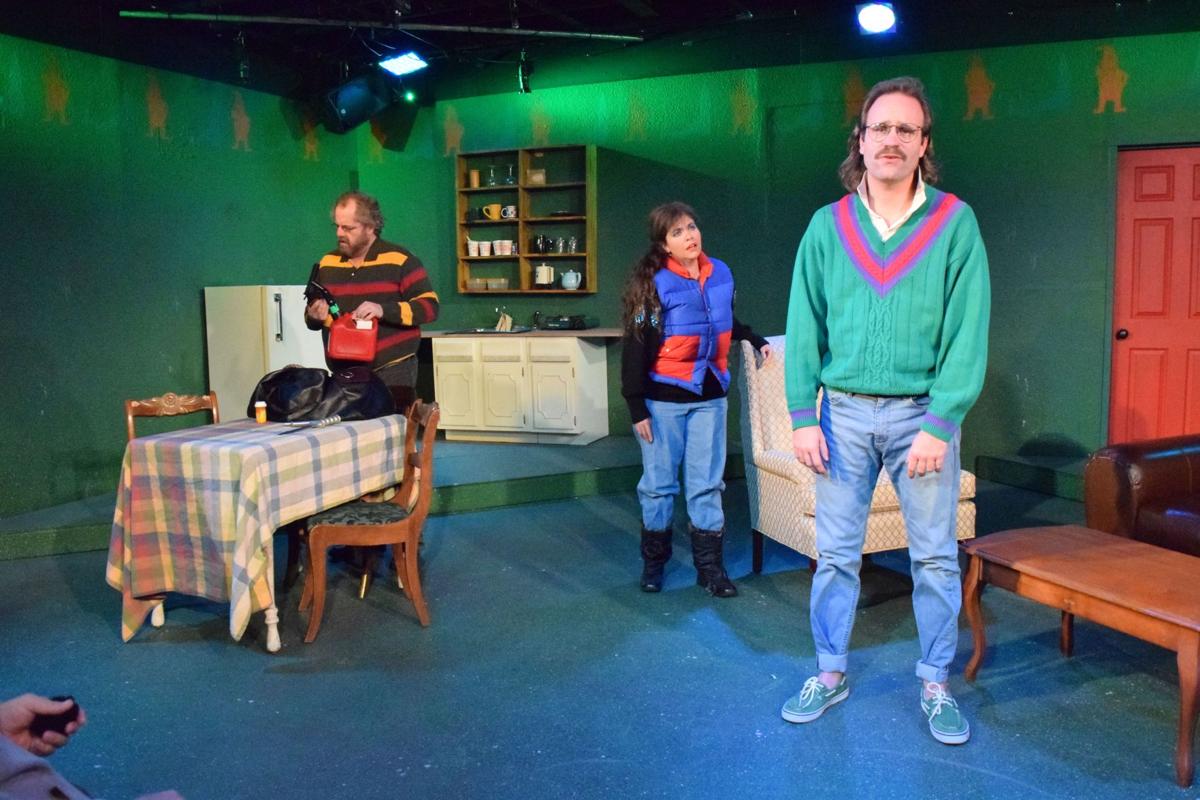 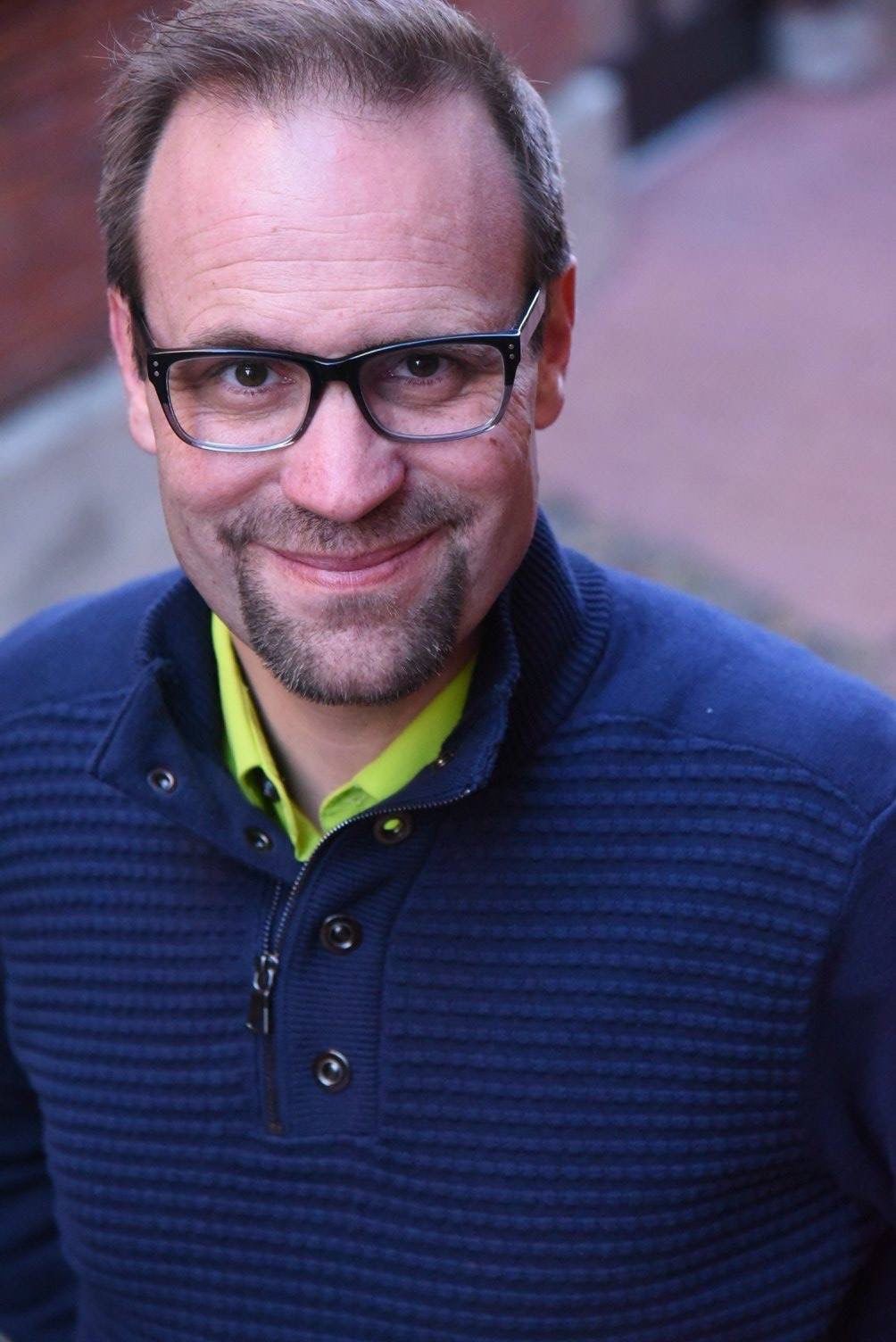 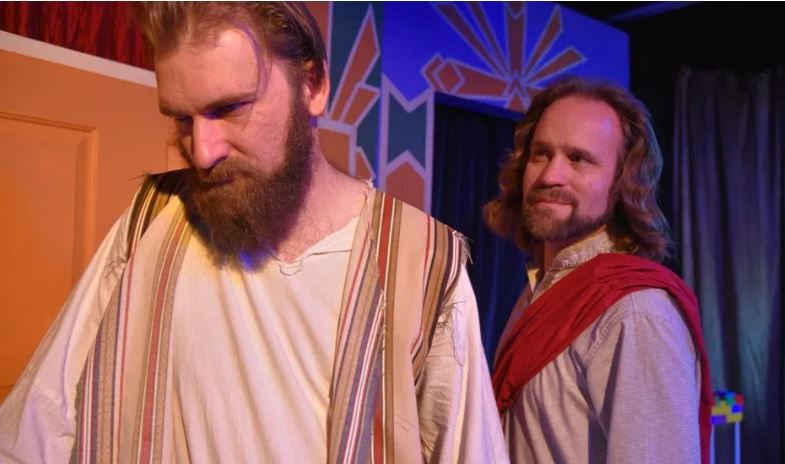 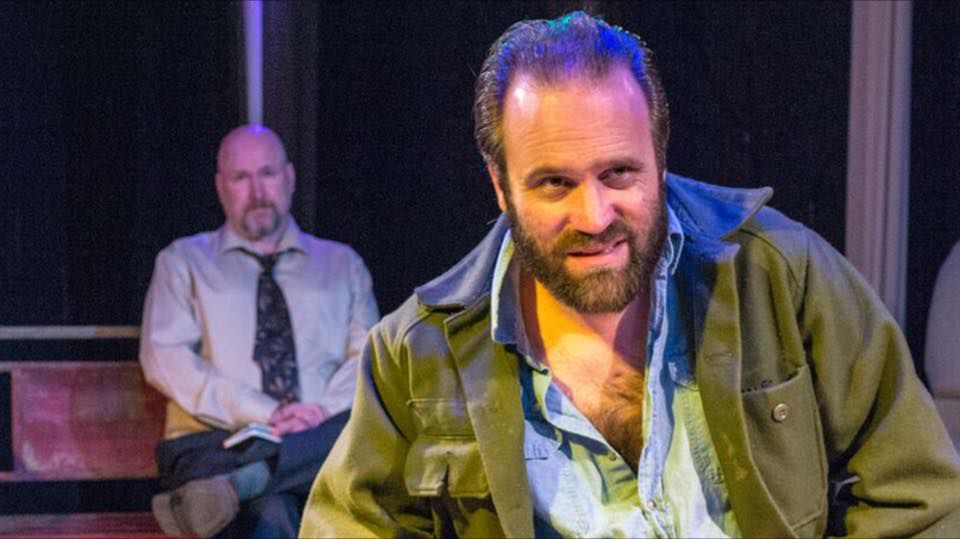 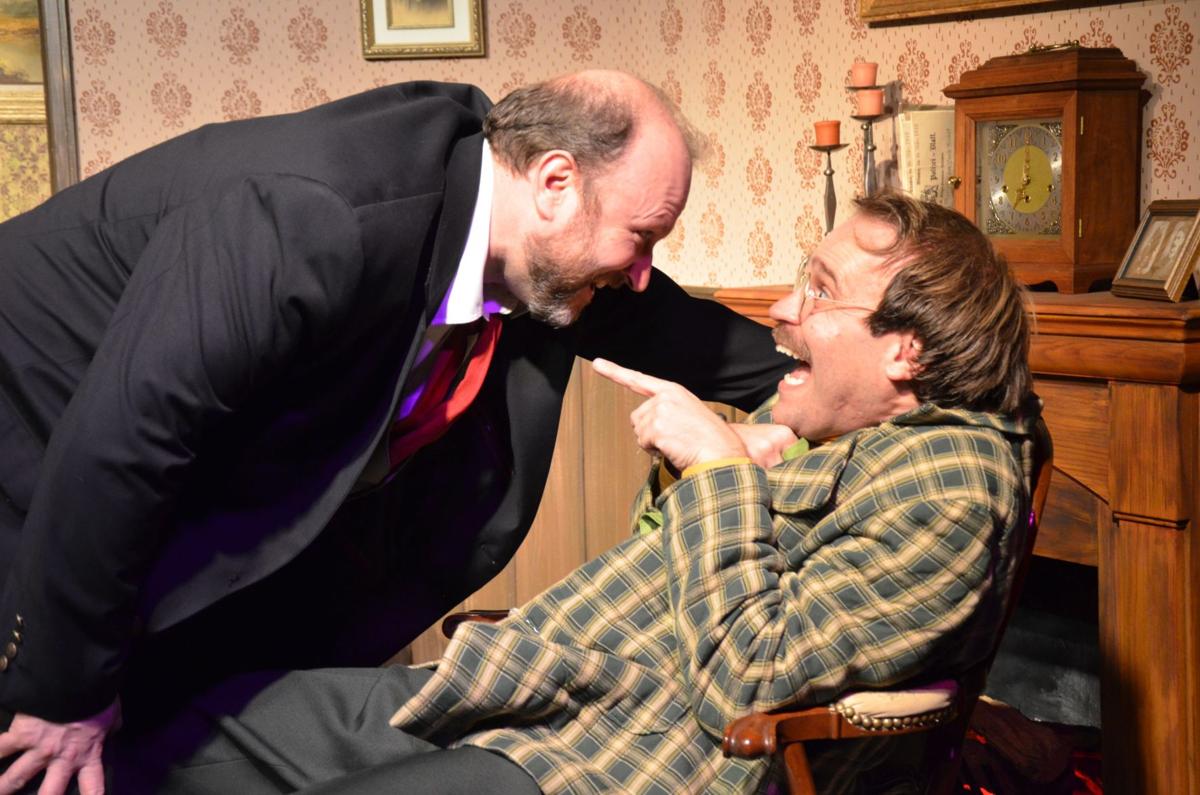 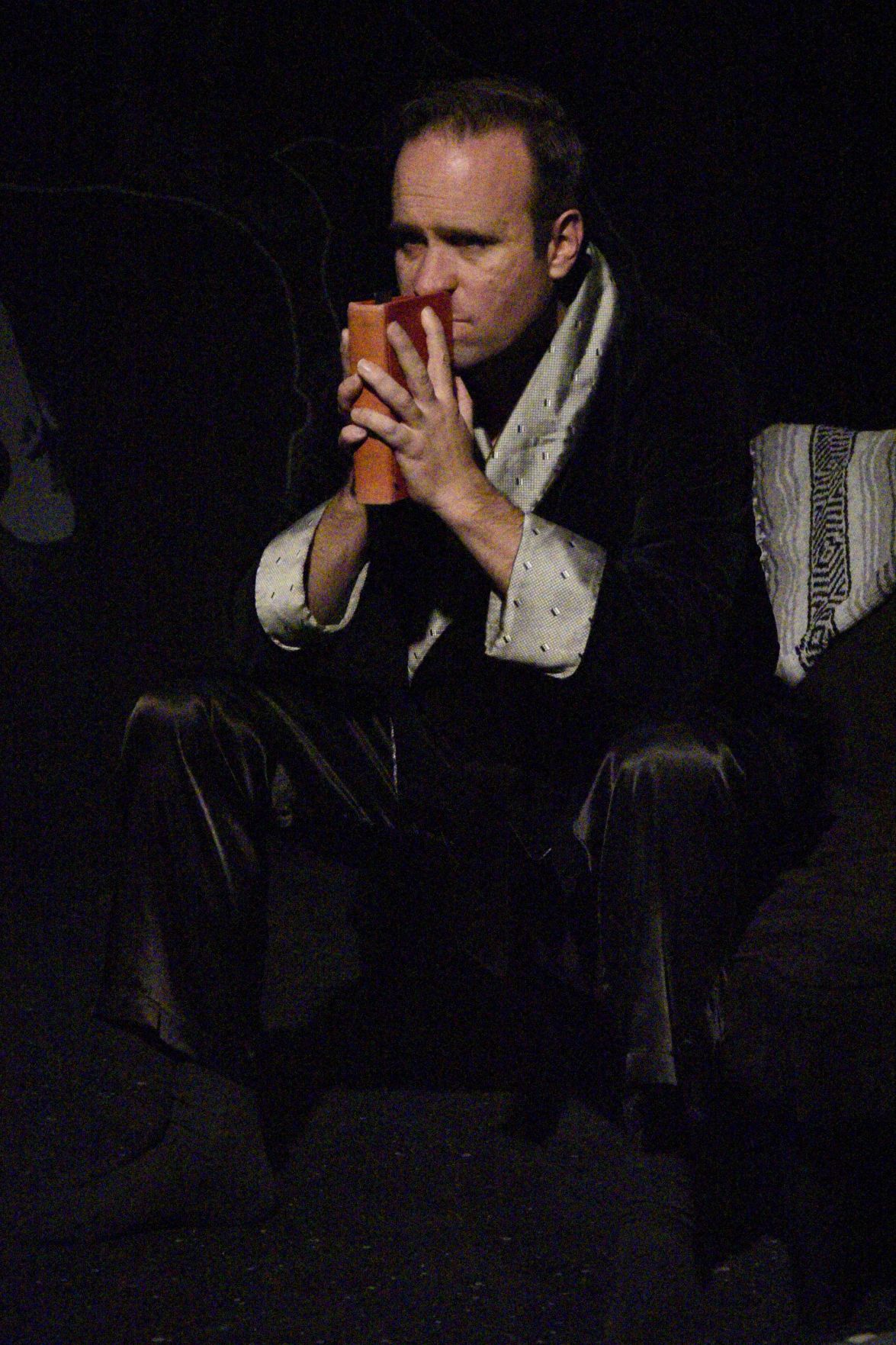 As Charles Anthony Bruno in Springs Ensemble Theatre’s recent production of “Strangers on a Train,” he channeled the spirit of a psychopath who proposes the idea of exchanging murders with a man he meets on a train.

“It was harder than I anticipated,” Collinson says. “When the rubber hit the road, I had to fight to find that character. I thought it would be a cakewalk.”

But finding a way to maintain the darkness and intensity of the character for two-plus hours is what it’s all about for the Colorado Springs native, who works for Rocky Mountain PBS as its manager of engagement for southern Colorado.

“That’s the whole reason we act — to not be ourselves for two hours.”

A life on stage

The first time Collinson took to the stage as the character of water, along with a group of other first graders, in a play about Winnie the Pooh and a great flood, he was not entranced: “This is stupid. I hated it.”

Clearly, Collinson developed a predilection for more challenging roles, as the next year he starred in the much more nuanced part of the White Rabbit in “Alice in Wonderland.” That’s when he caught the bug known as acting.

“I was good at it. It sounds braggy, but I got to ham it up and be who I was and create something fun that people enjoyed,” he says. “It was the thing I was built to do.”

After graduating from Coronado High School, he went off to Sterling College in Kansas, where he earned a bachelor’s degree in communications in theater arts and performed in about two dozen shows in four years, the highlight of which was the role of Marcellus Washburn in “The Music Man.”

Back home in the Springs in the mid-’90s, his acting career kicked off with the musical “Guys and Dolls” at the Colorado Springs Fine Arts Center at Colorado College: “That was my first big local breakthrough,” he says.

And now, more than two decades later, Collinson can reel off the dozens of shows he’s done with almost all of the theater companies, including TheatreWorks, Star Bar Players and THEATREdART. His home and his heart, though, is with Springs Ensemble Theatre, where he’s been a member since 2013, vice president for the past four years and worked on more than 30 productions.

“He’s got a lot of great comedic timing,” says Sarah S. Shaver, one of SET’s founding members. “He’s a really funny actor and a funny human. He’s light on his feet and he can roll with the punches in case something goes wrong on stage.”

His resume includes SET’s “The Underpants,” “Art” and “Lonesome Hollow,” for which he was nominated for best supporting actor by Colorado Theatre Guild’s annual Henry Awards; “Three Sisters” and “The Drunken City” by THEATREdART; and FAC’s kids’ shows “Stuart Little” and “Junie B. Jones: The Musical.”

“Kids’ shows are great — they’re so wide-eyed and excited,” he says. “I remember as a kid the FAC used to come around and do shows in parks and libraries, and create this world that sucked you in. Doing that for kids is super great. They come up to you and think you’re a big deal, and you’re like, ‘Look kid, I’m going to go home and watch Netflix just like everyone one else.’”

Concerts to livestream this weekend, from Miley Cyrus to Melissa Etheridge

His life has revolved around finding his mark on and off stage, as he also started directing after teaching theater for six years at The Classical Academy in the early 2000s. Acting and directing fill two creative buckets for him. As an actor, his job is single-minded: inhabiting a role in that particular moment of a character’s life and exploring their relationships with the other characters. But as a director, he gets to see the show differently.

“I like having the overall vision and being able to see the whole piece and paint that whole picture,” says Collinson, who directed last year’s SET dark comedy “The Moors.” “As a director you get to put all those puzzle pieces together.”

Years back, he also started The RiP improv group, which still performs regularly at Millibo Art Theatre, though life did that thing it does, and dragged him away from his creation. There was also Jakes Theater, a small group he founded with friends, that did cabaret and other shows in small venues around town.

If you’ve talked with the affable, lighthearted Collinson, it’s not hard to see why he leans toward comedy, though he does like a serious play, with a touch of the darkness, hence “Strangers on a Train,” which he pitched to SET’s Artistic Recommendation Committee.

“Performing with him in ‘Lonesome Hollow’ was one of my favorite performances,” says Shaver about Collinson’s role as Nye, a serial molester. “He was super creepy. It was great to see him dig his teeth into something that wasn’t his personal character. It was transformative.”

What keeps Collinson hooked to the stage is the storytelling. Everyone likes a good story, he says.

“Theater is like a full-contact sport, we just don’t wear any protective gear. It’s physical and challenging and exercises your body and mind. Being somebody else for those hours is often very nice. You deal with their problems and when the curtains fall they’re solved.”

What are you doing to stay healthy?

"Occasionally meeting my brother to walk his dog. Trying to eat more regularly. I tend to forget about breakfast and work until I'm two minutes from passing out. I love to bike, but I hate being cold. Now that it's nicer, I'm going to pull that (bike) out."

What are you eating?

"Smucker's Uncrustables. They're pre-made peanut butter and jelly sandwiches that are frozen and you thaw them. I'm also a large fan of animal crackers."

What are you drinking?

"If my doctor is reading, only water. However, I love plain old classic Coca-Cola."

What are you watching?

What are you reading?

"Scripts for next season. It’s that time of year."

What are you listening to?

"I love some musical theater music, but Indigo Girls do something to my soul. Mary Chapin Carpenter, Marc Cohn, David Ford, Ingrid Michaelson."

What are you doing to pass the time?

"Trying to stay in contact with as many friends as I can who are stuck at home. People need connection and it’s not even healthy for us to do that right now. I talk to friends in Chicago or text across Powers Boulevard and we find a lot of things in common, but #togetherapart. It’s not a me thing or a you thing, it’s an us thing."

Colorado Springs Philharmonic stands behind its musicians and hopes to maintain patrons.