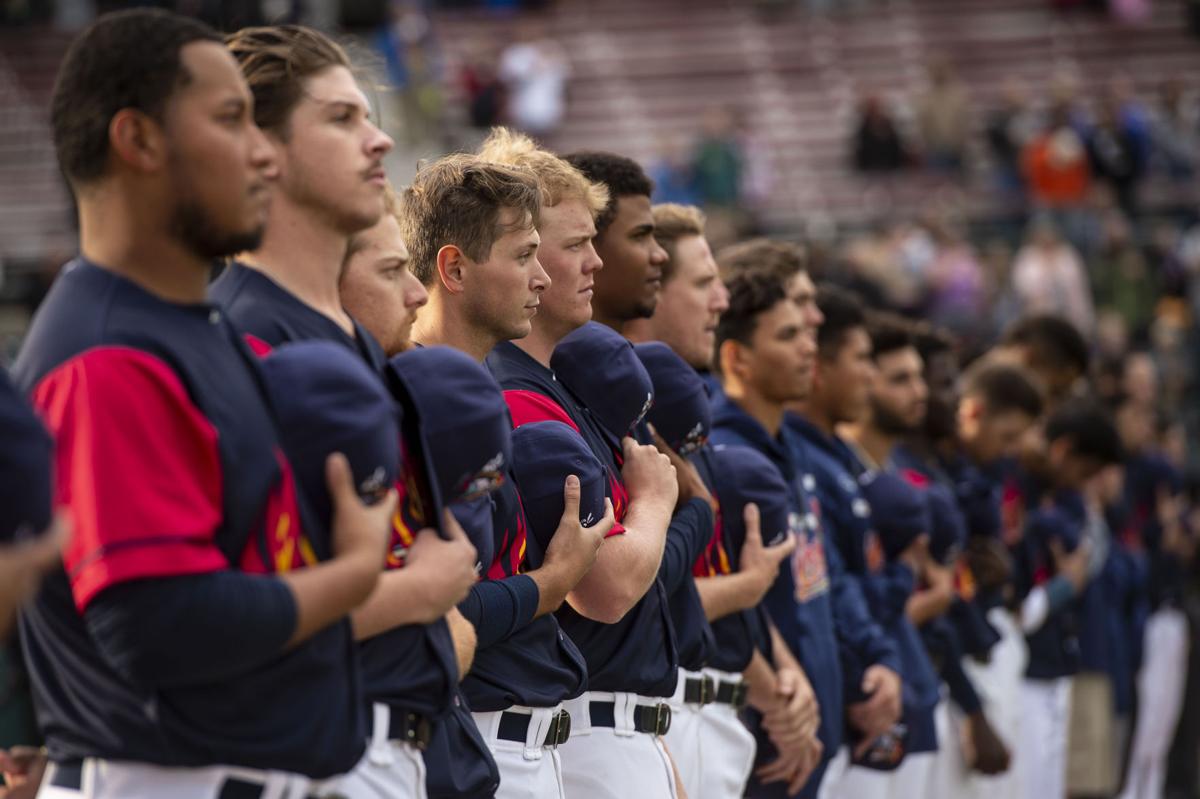 The Rocky Mountain Vibes stand during the national anthem before the start of their June 22, 2019, game against the Grand Junction Rockies.

The Rocky Mountain Vibes stand during the national anthem before the start of their June 22, 2019, game against the Grand Junction Rockies.

NEW YORK — Baseball's minor leagues canceled their seasons Tuesday because of the coronavirus pandemic, and the head of their governing body said more than half of the 160 teams were in danger of failing without government assistance or private equity injections.

The National Association of Professional Baseball Leagues, the minor league governing body, made the long-expected announcement that ended the season for Colorado Springs' Rocky Mountain Vibes and other clubs for the first time since 1901.

“We are a fans-in-the-stands business. We don’t have national TV revenues,” National Association president Pat O’Conner said during a digital news conference. “There was a conversation at one point: Well, can we play without fans? And that was one of the shortest conversations in the last six months. It just doesn’t make any sense.”

O'Conner continued: “I had a conversation with the commissioner, and we weren’t able to find a path that allowed us to play games. It wasn’t an acrimonious decision on our part.”

Paul Klee: Just as Colorado Rockies outfielder Ian Desmond opted out, some sports fans will too

Vibes President and GM Chris Phillips called the aftermath of the announcement “dealing with reality.”

“It’s been kind of dragging on and having to sit by and watch all of the Major League Baseball negotiations go on, and what a mess that has been, and knowing that all of Minor League Baseball is kind of sitting by patiently waiting ... knowing full well that the likelihood of a season is not great. It’s nice to have a little bit of closure to it.

“We’ve been very transparent and open and have had good conversations with sponsors. Saying that as much as we would love to believe there’s a season on the horizon, it’s very unlikely.”

Phillips said the carry-over with sponsors and season-ticket holders will be handled on a case-by-case basis. The short season benefited them in that they hadn’t yet collected a lot of money from sponsors. Some sponsors have the opportunity to allocate those funds toward events the Vibes are hosting in the summer and fall. They can also roll over to 2021.

“I can’t think of one situation where it’s been a struggle, Phillips said. “I feel grateful that we have been as open as we have been to not make this some big shock. Other teams around the country were giving some false hope of some season still occurring.”

The Vibes are “fully prepared” to refund anyone asking for a full refund on their season-ticket deposit but would “ideally” prefer to roll them over to next season.

“We would like to thank our amazing partners, season ticket holders, fans, and the Colorado Springs community for their continued support over the last several months,” Phillips said in a team statement.

MLB teams are planning for a 60-game regular season and most of their revenue will derive from broadcast money.

However, minor league teams face uncertain futures. There’s a possibility the Vibes will have to rethink their business model without baseball, to figure out whether the venue is sustainable as a concert or event venue.

“It’s not at the forefront of what we’re prioritizing right now,” Phillips said. “We want to stay an integral part of the community, keep people employed, make enough revenue to get through the offseason while still being in a challenging spot of being in this wait-and-see mode of ‘What does this next year look like?’

“It’s pretty clear with how negotiations have gone ... it’s not going to be a quick decision, which makes it even more difficult."

“That was a Band-Aid on a hemorrhaging industry,” he said. “Many of our clubs have gone through one, two, maybe three rounds of furloughs. In our office here, we’ve had varying levels of pay cuts between senior management, staff, and we’ve furloughed some individuals, as well, and are just about to enter in a second round of furloughs.”

He hopes for passage of H.R. 7023, which would provide $1 billion in 15-year federal loans from the Federal Reserve to businesses that had 2019 revenue of $35 million or less and “have contractual obligations for making lease, rent, or bond payments for publicly owned sports facilities, museums, and community theaters.”

In addition, the Professional Baseball Agreement between the majors and minors expires Sept. 30, and MLB has proposed reducing the minimum affiliates from 160 to 120, including cutting the Vibes.

“There’s no question that what the pandemic has done is made us somewhat weaker economically,” O'Conner said. “I don’t think it’s challenged our resolve. I don’t think it’s impacted our desire to stick together and get a good deal.”

There have not been substantive talks for about six weeks.

“There are very many teams that are not liquid, not solvent, not able to proceed under normal circumstances, and these are anything but normal circumstances given the PBA and the uncertainty of the future for some of these ballclubs,” O’Conner said. “So I think the coronavirus has really cut into many clubs’ ability to make it. And I think that we’re looking at without some government intervention, without doing something to take on equity partners, you might be looking at half of the 160 who are going to have serious problems.”

MLB already has told clubs to retain expanded 60-player pools, of which 30 players can be active during the first two weeks of the season starting in late July.

Conner said the financial impact of the pathogen might extend until 2023.

“As serious as the threat from Major League Baseball was,” O'Conner said, “this threat from the coronavirus, it transcends any list that anybody wants to make with respect to the possibility of teams not being around in the future.”

Copyright 2020 The Associated Press. All rights reserved. This material may not be published, broadcast, rewritten or redistributed without permission.