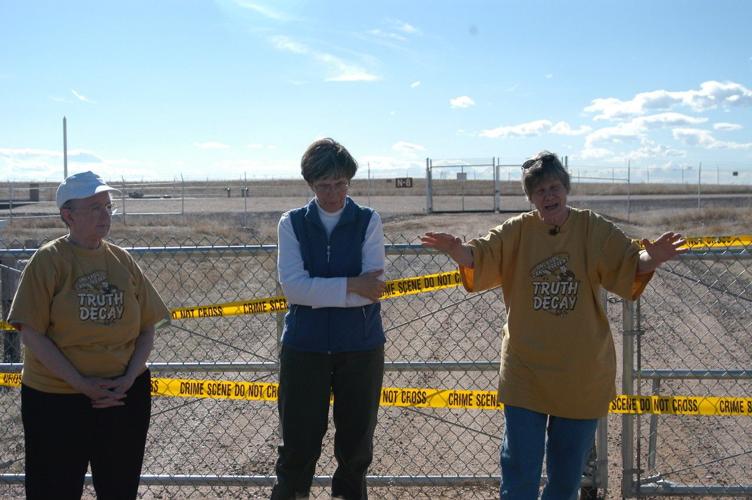 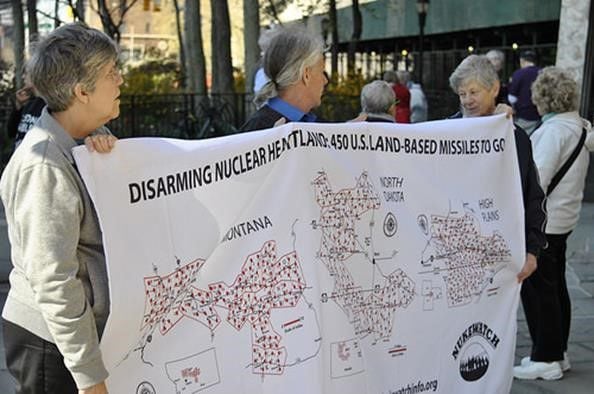 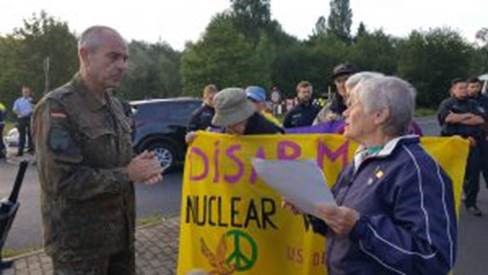 Sister Ardeth Platte on July 17 hands a copy of the newly adopted United Nations Treaty on the Prohibition of Nuclear Weapons to Gregor Schlemmer, commander of Büchel Air Base in Germany, a deployment site for 20 US nuclear-armed B61 H-bombs. Sister Carol Gilbert is in the brown hat. Photo by Marion Kuepker 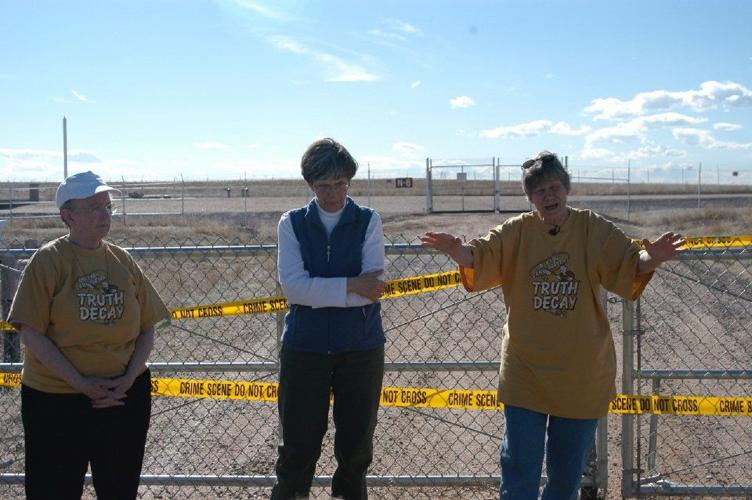 Sister Ardeth Platte on July 17 hands a copy of the newly adopted United Nations Treaty on the Prohibition of Nuclear Weapons to Gregor Schlemmer, commander of Büchel Air Base in Germany, a deployment site for 20 US nuclear-armed B61 H-bombs. Sister Carol Gilbert is in the brown hat. Photo by Marion Kuepker

As political tensions mount over North Korea's ballistic missile testing, two elderly Roman Catholic nuns who have spent decades sounding the plea for peace say they are more hopeful than ever that nuclear weapons - not the world - will be annihilated.

"We trust, we believe, we know that we are well on the way to a nuclear-free world and future," said Sister Ardeth Platte, a Dominican nun.

Platte, 81, and Sister Carol Gilbert, 69, live at the Catholic Worker-affiliated Jonah House in Baltimore. They gained attention in Colorado in the past for pouring blood on a nuclear missile silo in Weld County and anti-war civil disobedience at Colorado Springs military bases.

Fifteen years later, they are returning to deliver the message that nuclear disarmament is at hand.

"We're in an extremely dangerous time," Platte said. "A strike could be launched from Colorado within 15 minutes and go 7,000 miles to its target within half an hour. It would be total devastation."

At 3:30 p.m. on Oct. 9, they'll present to Peterson Air Force Base personnel a copy of the new United Nations' Treaty on the Prohibition of Nuclear Weapons.

"We want the citizens of Colorado to know about this treaty," Gilbert said. "The treaty would make nuclear weapons illegal."

The sisters also will hold free public presentations: at noon Oct. 9 at the University of Colorado at Colorado Springs in the Kraemer Family Library; at 7 p.m. Oct. 10 at Colorado College's Gaylord Hall, on the main floor of Worner Campus Center, 902 N. Cascade Ave.; and a potluck dinner at 6 p.m. Oct. 11 at 420 Mesa Road.

"We're coming as peacemakers and peace advocates, to teach and show our concern," Platte said. "Our politicians could be heroes of these times, if they start working with nations rather than against nations."

Leading up to the Colorado Springs events, Platte and Gilbert will conduct a vigil on Oct. 7 at the N-8 missile silo in Weld County, where in October 2002 they poured blood on a Minuteman III missile loaded with a 20 kiloton nuclear bomb, one of 49 high-trigger nuclear weapons stored in Colorado. Their action symbolized taking it offline.

They were convicted of sabotage and received harsh sentences: 41 months for Platte and 33 for Gilbert.

In September 2000, Platte, Gilbert and three other Catholic nuns were arrested for civil disobedience at Peterson Air Force Base and jailed. The charges were subsequently dropped. They've also served time in other states for nonviolent acts of civil disobedience.

Prison provided the opportunity to do their best Christian ministry, Gilbert said.

"We feel it is the closest that we can be with the poor of this country because jails and prisons are warehouses for the poor," she said. "You learn people who have nothing are so generous in sharing, you learn what a waste the prison industrial complex is."

The work of Platte and Gilbert has been "very significant," said Bill Sulzman, founder of Colorado Springs-based Citizens for Peace in Space, an activist group that opposes the use of space for war-related activities.

"It's unique in the sense that it's primarily a moral argument against nuclear weapons and the phenomenon of modern-day war," he said. "Not supporting it is one thing, actively opposing it is another."

As part of a non-governmental organization, the International Campaign to Abolish Nuclear Weapons, the nuns attended a United Nations conference in New York, when on July 7, 122 countries - two-thirds of the 193-member states - adopted the Prohibition of Nuclear Weapons Treaty. It's the first legally binding multilateral agreement for nuclear disarmament in 20 years.

The treaty came after months of negotiations, which the United States, Russia, Great Britain, France, North Korea and other nations did not attend.

To date, 53 countries have signed the treaty, and three ratified the document, which prohibits developing, testing, producing, manufacturing, acquiring, possessing and stockpiling nuclear weapons or other nuclear explosive devices, as well as the use or threat of use of such weapons.

The treaty opened for signatures at U.N. headquarters in New York on Sept. 20; the Vatican was the first to sign and ratify the treaty. The agreement would become law 90 days after at least 50 countries ratify it.

The sisters are optimistic that the treaty is the weapon needed to abolish nuclear capability.

"I've been working on this issue for 50 years, and this is the greatest hope I've had," Platte said. "We finally have a tool, a treaty that declares criminality to the possession and threat of using nuclear weapons."

Even if the United States, Russia and other countries with nuclear warheads never get on board, "it won't matter because there will be great pressure by other nations," Platte said. "People are much wiser as we come closer and closer to nuclear holocaust."

"This is just the beginning of the implementation - we have gained real momentum," Platte said.

The atomic bombs the United States dropped on Hiroshima and Nagasaki, Japan, in August 1945 were small compared to today's weapons of mass destruction, the sisters said.

If a nuclear war were to happen now, "that is the elimination of the planet," Platte said.

Nuclear weapons are the only weapons of mass destruction not universally prohibited. Biological weapons, chemical weapons, land mines and cluster munitions are banned under international law.

"We believe that the way to solve nations not having nuclear weapons is the total elimination," Platte said. "It's time to get rid of them."

For more information on the events, contact Sulzman, bill.sulzman@gmail.com or 389-0644.

This year also could be when the prayers of two internationally known Catholic nuns, who for nearly 50 years have been fighting for nuclear disarmament, are answered.