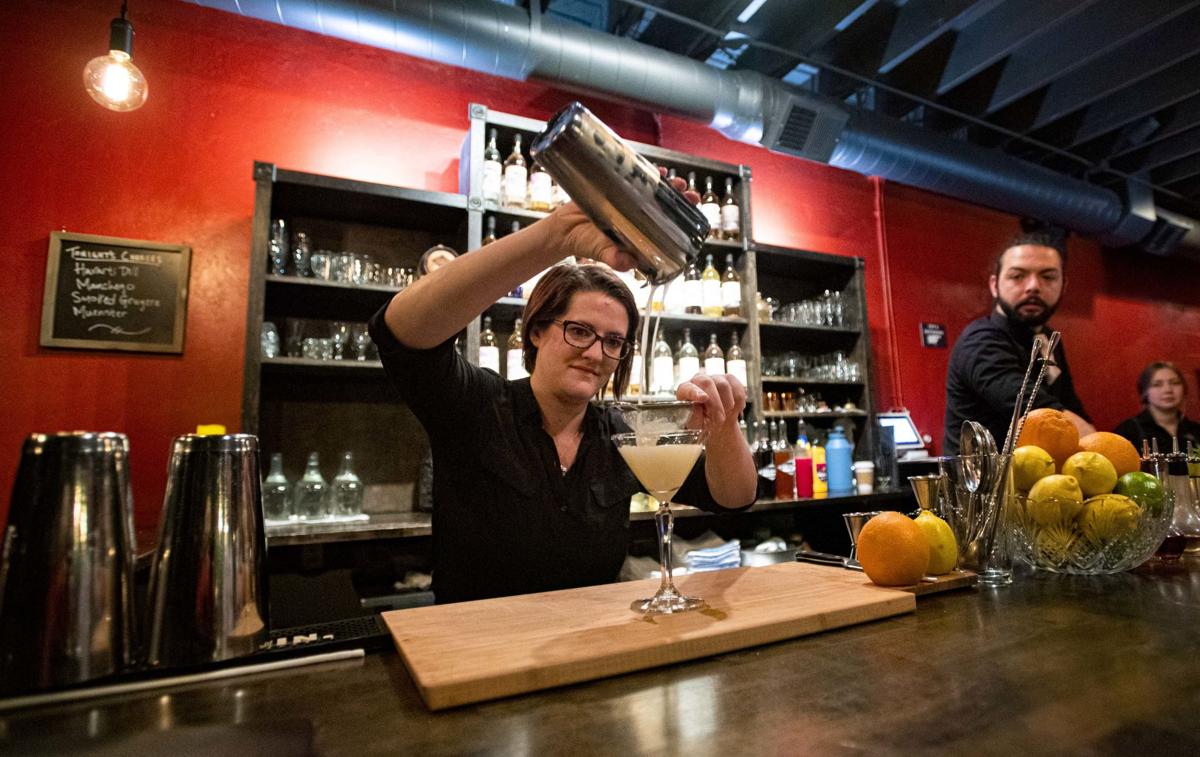 Bartender Regan Capozzella pours a “Final Word” while serving drinks Friday, Jan. 17, 2020, at the speakeasy Brooklyn's on Boulder St. in Colorado Springs. Friday marked the 100th anniversary of the start of prohibition in the United States. (The Gazette, Christian Murdock) 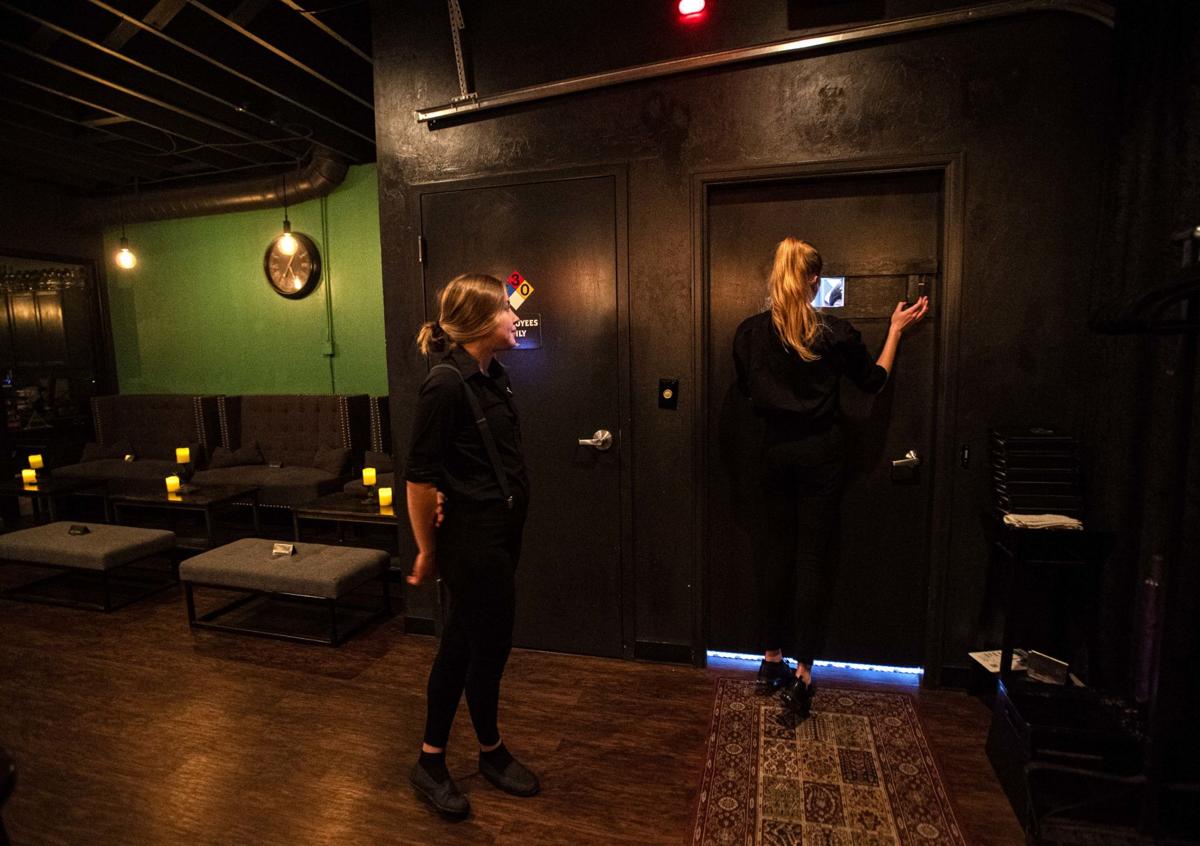 Morgan Keebler, right, checks a patron at the door before letting them in while Robin Jones stands by Friday, Jan. 17, 2020, at Brooklyn's on Boulder St. in Colorado Springs. The downtown Colorado Springs bar is set up as a speakeasy as if it was the 1920s. Friday marked the 100th anniversary of the start of prohibition in the United States. (The Gazette, Christian Murdock) 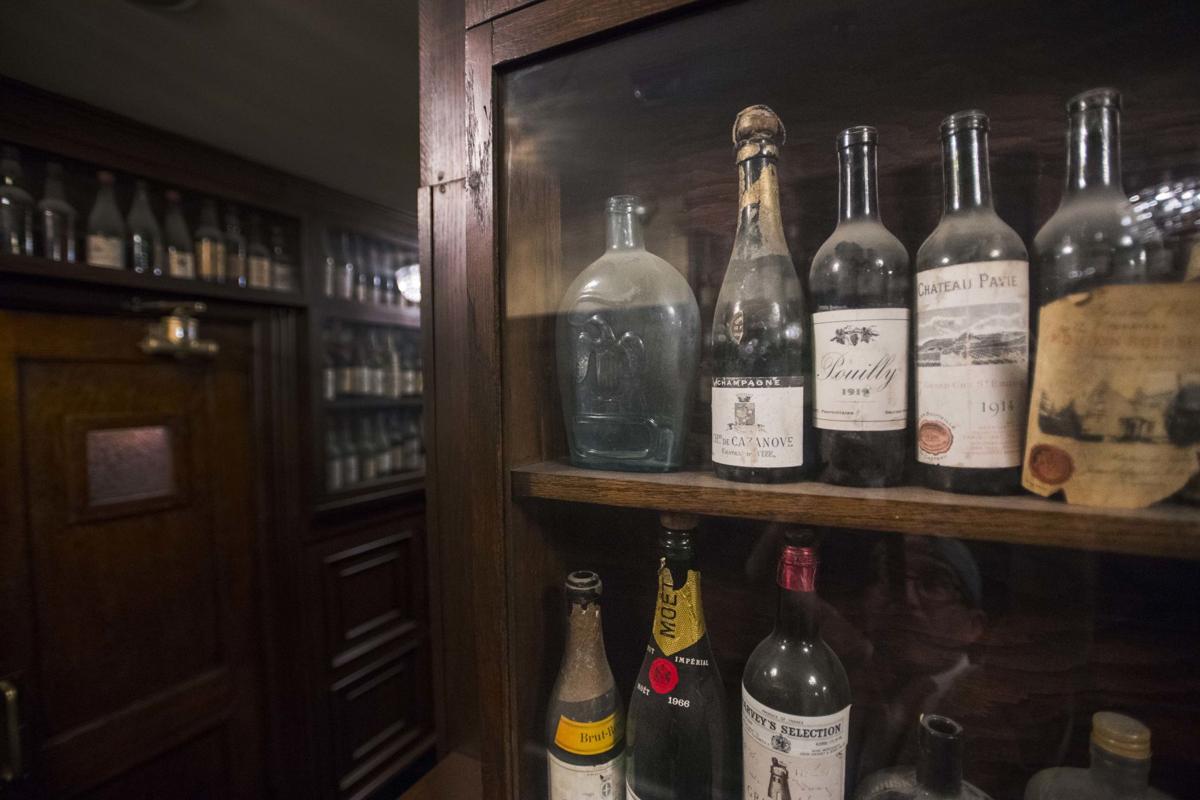 Rows of fine liquors consumed during prohibition and later by Spencer Penrose line the walls of Bottle Alley in the Broadmoor Hotel outside the Tavern Room Wednesday, June 6, 2018. Penrose stockpiled train loads of liquor before prohibition to supply him and his friends. (The Gazette, Christian Murdock)

Bartender Regan Capozzella pours a “Final Word” while serving drinks Friday, Jan. 17, 2020, at the speakeasy Brooklyn's on Boulder St. in Colorado Springs. Friday marked the 100th anniversary of the start of prohibition in the United States. (The Gazette, Christian Murdock)

Morgan Keebler, right, checks a patron at the door before letting them in while Robin Jones stands by Friday, Jan. 17, 2020, at Brooklyn's on Boulder St. in Colorado Springs. The downtown Colorado Springs bar is set up as a speakeasy as if it was the 1920s. Friday marked the 100th anniversary of the start of prohibition in the United States. (The Gazette, Christian Murdock)

Rows of fine liquors consumed during prohibition and later by Spencer Penrose line the walls of Bottle Alley in the Broadmoor Hotel outside the Tavern Room Wednesday, June 6, 2018. Penrose stockpiled train loads of liquor before prohibition to supply him and his friends. (The Gazette, Christian Murdock)

As buzz-kills go, this weekend a century ago was one for the record books.

Crusaders of the movement, including “dry reformer” and superintendent of the New York Anti-Saloon League, William Anderson, envisioned “a new era of clean thinking and clean living,” according to historian Michael A. Lerner, author of “Dry Manhattan: Prohibition in New York City.”

Brooklyn's on Boulder lets you in on the secret | Pikes Pick

Thanks to an extended heads up before the law slammed down, however, individuals and business owners who didn’t subscribe to such views had plenty of time to prepare for legislated morality. They hoarded alcohol, the supplies needed to make and package it, and remodeled to create furtive gathering spots where libations could continue to be enjoyed on the down low.

As soon as the 18th Amendment became law in America, sneak-arounds to the ban on the manufacture, sale and transportation of intoxicating beverages — a federal bid to better the moral fabric of a nation many saw as trending toward turpitude — were getting a workout.

In Colorado, however, such dynamics were already old hat.

Centennial State residents voted to enact anti-alcohol laws four years before the rest of the nation. And in Colorado Springs, founded in 1871 by famous abstainer Gen. William Jackson Palmer, alcohol had always been a no-no.

“Colorado as a whole always was leading the way, on women’s rights and on various other things,” said Suzanne Schorsch, of Old Colorado City History Center Museum. A chapter of her soon-to-be-released book on the history of the Colorado Territory’s first capital is devoted to Prohibition.

“There were many towns in Colorado founded as dry towns, including Colorado Springs,” she said. “Then they would immediately try to make everyone around them dry, too.”

The decades before, however — with a dry Springs and an unabashedly wet neighbor to its west — provided insight into how Prohibition would play out nationwide.

First, though, even during Prohibition, the kibosh on alcohol didn’t extend to medicinal or sacramental uses.

“In Colorado Springs, it was a well-known fact that if you knew the proper wink, you could get medicinal alcohol in any drug store. So if you have a little bit of indigestion, you could ‘wink wink wink’ get something for that,” Schorsch said. “That’s why if you look in the Polk directories of the day, why there were so many drug stores.”

Prior to the 18th Amendment, if malingering for tipples wasn’t your bag you only need trek slightly west for a good time in a city that, after the Cripple Creek Gold Rush, had grown accustomed to catering to the pleasures of out-of-towners — including thirsty residents of its stuffier sister city.

“Colorado City was around before Colorado Springs. There were always one or two places where you could wet your whistle in Colorado City, but it wasn’t a wild town until Colorado Springs was founded in 1871,” Schorsch said. “When they struck gold in Cripple Creek and tons of people were coming into the area, we had 20 bars in a three block area in Colorado City. It wasn’t our people that were drinking, it was the teetotalers from Colorado Springs that came over here to drink. And that’s one of the reasons we had tunnels in our city.”

Being spotted in a saloon was enough to sully a good name. A visit to the Oxford Club, in the Templeton Building on N. 25th St., however, allowed one to keep up appearances.

“You go into the Oxford’s Gentlemen’s Club. You’re going to go read your newspaper at your gentlemen’s club. Well, you could take a tunnel from there and go to a bar ... or a bordello ... and you could come back and you leave from the Oxford Gentlemen’s Club,” said Schorsch, whose history center hosts a summer tour of the locations with sub rosa routes called Tales of the Tunnels. “Every business over here would like to think they had a tunnel, but we only do it (the tours) where we can verify that, historically, there was one.”

As soon as Colorado City voted to go dry in 1914, watering holes moved four blocks up 24th Street to an area around what's now known as Thorndale Park.

“If you don’t allow it one place, they’ll find another place to have it,” Schorsch said. “The town of Ramona was born. It was only there a couple years, because then Colorado as a whole went dry and that town kind of disappeared.”

When Colorado went dry, Ramona dried up. Where alcohol production continued, it did so primarily as a domestic endeavor.

“Then everybody started, grandmothers were making wine at home. People will always find a way to go around things,” Schorsch said.

Distillers also did their thing, in the backwoods of Colorado.

“In the Monument, Palmer Lake area, there were stills. Literally, stills in the hills around here,” said Douglas County historian and filmmaker Jim Sawatzki. “The locals had potato patches, and they grew potatoes specifically for their stills in the hills above Palmer Lake and west of Monument. There was plenty of bootlegging going on around here, and you could discreetly get what you wanted.”

If you ran in the right, moneyed circles during Prohibition in Colorado Springs, you may have had access to a generous stash amassed by one of Prohibitions most vocal critics, Spencer Penrose, founder of The Broadmoor hotel. It’s said his massive stockpile of liquor was so voluminous it outlasted Prohibition.

“Spencer Penrose was very much against the law going into enactment, and he was a bon vivant and he was very much the entertainer,” said The Broadmoor’s public relations and communications manager Krista Heinicke. “He really wanted it (Prohibition) to be repealed, and so he was excited that it was.”

The Broadmoor was among a number of locations that celebrated the “holiday” in ironic style, with special gatherings and cocktails.

“In our little humorous way we were celebrating the enactment (of Prohibition), by actually having libations. Because they wouldn’t have had it 100 years ago,” Heinicke said. “Basically it’s more just acknowledging that (Prohibition) was enacted 100 years ago this month and this week, so it was just sort of a way for us to acknowledge it, in hopes it never comes back again.”

In a world where being sober-curious is a thing, it’s hard to imagine not being able to get the sauce you want, right when you want it. But it’s kind of fun to empathize, when you're beyond the hurt.

“At least the clothes and the music were good during Prohibition,” said Mike Bristol, whose Bristol Brewing Co. hosts an annual themed party in April celebrating the repeal. “Other than that, it seems like a really dark time to me. The rise of organized crime as we know it, making citizens criminals for having a drink, and the economic impact on tax revenue and employment were all significant consequences of prohibition. Let’s not ever try that experiment again.”