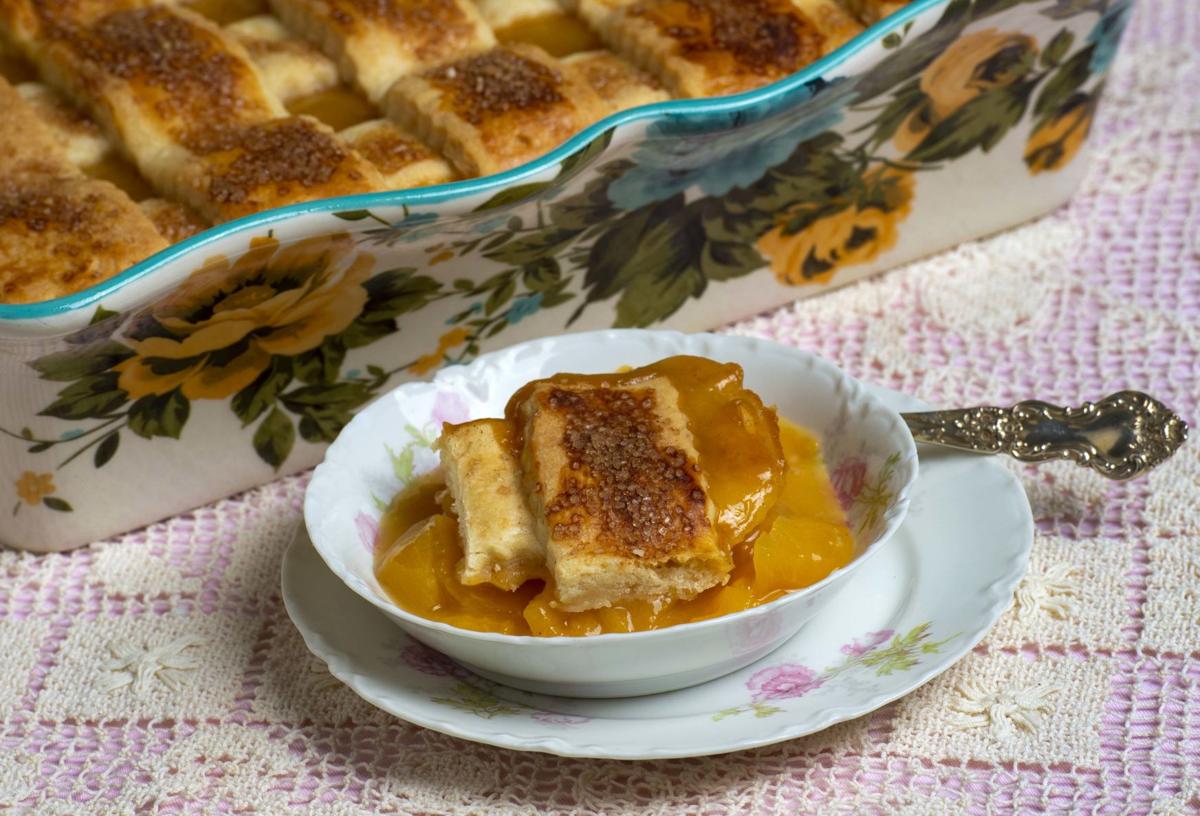 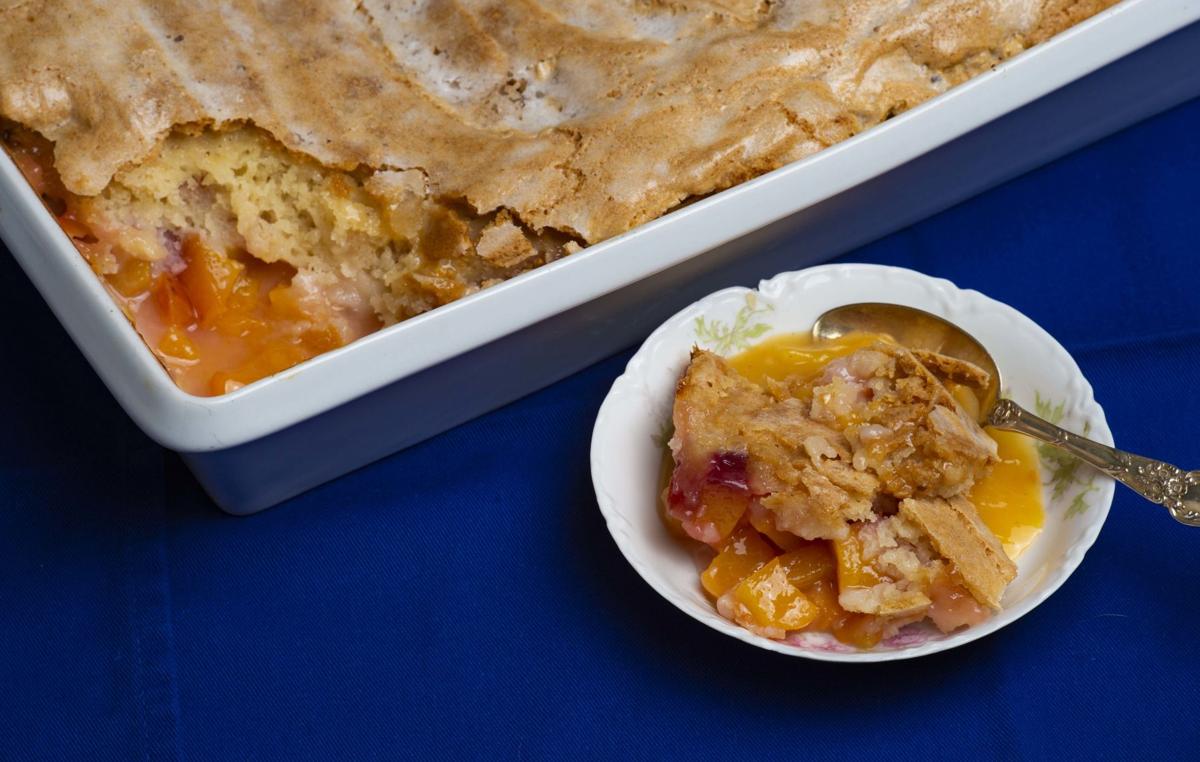 The much-anticipated Palisade peaches are taking the starring role in Colorado’s summer fruit parade at farmers markets and grocery stores. What better time to stock up and toss them into a cobbler?

Cobblers are easy to make. This deep-dish dessert involves fruit, butter, sugar and flour combined in one way or another. Most have a thick biscuit crust. Some versions have the fruit enclosed in the crust, while others have a drop-biscuit or crumb topping covering the fruit. And if you’re a pie-baking queen or king, you might cover yours with a buttery, crisscrossed lattice.

Two of our local celebrated bakers gave us their favorite toppings for cobblers along with some peach preparation tips.

“Cobblers are a favorite of mine because I think they are the most rustic and forgiving form of pie,” said Heather Briggs, owner of Gold Star Pies. “Sometimes, if I don’t have a bottom crust made, I just skip it. The crumble topping is perfect for throwing in leftover nuts, rolled oats and last pinches in the spice bottle. I have been known to throw raisins in with my peach cobbler. I just love them. Leaving the skins on the peaches is a fast and easy way to throw a cobbler together, and it adds texture and vibrant color.”

Mari Younkin, a personal chef and food stylist, is a fan of lattice tops.

“I always use a rich, sweet, buttery biscuit dough,” she said. “I roll it out and use cookie cutters to cut different shapes or cut into strips to overlap and make a lattice pattern. I then brush the dough with melted butter and sprinkle with a sugar cinnamon blend.”

Younkin says it’s not necessary to peel peaches before putting them into cobblers — or into most baked fruit desserts, for that matter — since the baking process will soften the peel. But if you want to peel them, she suggests blanching the peaches first.

“Score them and drop in boiling water for only a few minutes, then drop into an ice bath,” she said.

Or you can put them in the microwave. Score each peach and microwave them one at time on high for a few seconds, then peel them.

For a completely different cobbler topping, try the recipe for a hot sugar crust. Sound weird? It did to us too. But after watching a video on Food52.com, we gave it a try and were blown away with the unique, delicious results.

The recipe is from “Food52 Genius Desserts,” a cookbook by Kristen Miglore, which is featured on the Food 52 website. It’s so easy to make. Besides peaches, the only other ingredient is a lemon: You use it to provide a dash of zest and a little juice.

In a video on their site, they demonstrate a fast way to cube peaches and remove the seed. Holding an unpeeled peach, make slices to quarter the fruit from one stem end to the other. Then make two slices around the circumference, one about one-third from the top and the other one-third from the bottom. Pull the peach cubes away from the seed and, for this recipe, place them in a baking dish.

“Only after smoothing on a layer of batter and dusting the top with sugar do you encounter the uncomfortable step of sloshing hot water over the top of your lovely cobbler,” write Miglore in author notes. “You won’t want to do it, but if you poke around on enough blogs, you’ll find similar recipes — though the water is usually poured over a mix of cornstarch and sugar.”

Their recipe uses sugar only. The hot water floats over the topping and melts the sugar.

“Then sugar and water fuse together in the oven as the water steams away,” they write.

It turns into a glass-like crust similar to sugar burned on crème brûlée. When tapped with a spoon, it sounded like it could shatter. But when a spoon is plunged in, the crust breaks apart easily, revealing lovely chunks of perfectly cooked peaches.

The flavor is amazing. The peaches are naturally sweet from their daily bath in Colorado’s hot days and cool nights, which allows the fruit sugar to concentrate. And the crust tastes like crunchy butterscotch hard candy. The texture contrast is so appealing. It’s addictive.

A few words of caution:

• Because there is baking powder in the batter, which is whipped, the crust will puff up and likely spill over the edges of the baking dish. Place the cobbler on a foil-lined pan to prevent the fruit juice and pastry from landing on and burning the oven racks and floor. The crust that wound up on the foil made for irresistible nibbling.

• The puffed-up crust also spreads during baking, so keep the batter layer thin, just covering the peaches and not reaching the edges of the pan.

• Instead of pouring the boiling water over the batter, use a spoon to add it. You’ll have more control.

Take your pick of toppings. But whatever you do, don’t let this year’s Colorado peach crop pass you by without making a few cobblers.

Heat the oven to 375 degrees, with a rack in the center. Line a large rimmed baking sheet with aluminum foil.

Arrange the peaches in a 9 by 13-inch (2 inches deep) or similar-size baking pan or gratin dish. Using a zester or Microplane, zest about 2 teaspoons of lemon zest evenly over the fruit. Cut the lemon in half and squeeze about 1⁄4 cup of lemon juice over the top.

In a stand mixer fitted with the paddle attachment, cream the butter and 1 1/2 cups of the sugar on medium speed until creamy but sandy, about 1 minute. Add the flour, baking powder, and salt and beat on medium speed until all the flour is incorporated and the mixture is evenly crumbly, about 30 seconds more. Scrape down the sides of the bowl. With the mixer on low speed, slowly pour in the milk. Increase the speed to medium and beat until the batter is light and fluffy, about 2 minutes.

Scoop the batter in about 6 large blobs over the peaches. With an offset spatula or the back of a big spoon, carefully spread the batter evenly over the fruit so it’s no more than about 1/2 inch thick in any one place to within ½ inch of the rim of the dish.

Sprinkle the remaining 1/2 cup sugar over the batter. Drizzle the hot water evenly over the sugar, using it to melt the sugar topping.

Set the pan on the foil-lined baking sheet and bake the cobbler until the top is golden brown and cracked, 70 to 80 minutes. A toothpick stuck in the topping should come out clean or with just crumbs clinging—be sure to check in a few places.

Let the cobbler cool for about 30 minutes to firm up. Serve warm, scooping it into big bowls and pouring a little heavy cream over the top. Refrigerate any leftovers airtight.

Pour the peaches into a greased a 9 x 13 deep baking dish Place lattice top over peaches and brush with melted butter. Sprinkle liberally with cinnamon and sugar.

Combine flours, baking powder, cream of tartar. Cut in the butter and shortening using a pastry fork or pastry blender. Make a well in the center of flour mixture. Add buttermilk. Stir together using a pastry blender. Bring together with your hands then place on a floured surface. Don't over mix. Roll out the dough to about half inch and cut out lattice strips. Begin laying lattice strips over fruit in a crisscross pattern. Note: This dough can also be made in a food processor.

½ of a vanilla bean, split and scrape out vanilla paste

School is back in session, and with many schools serving lunch before noon, youngsters are probably ending their day pretty hungry. Whether ki…