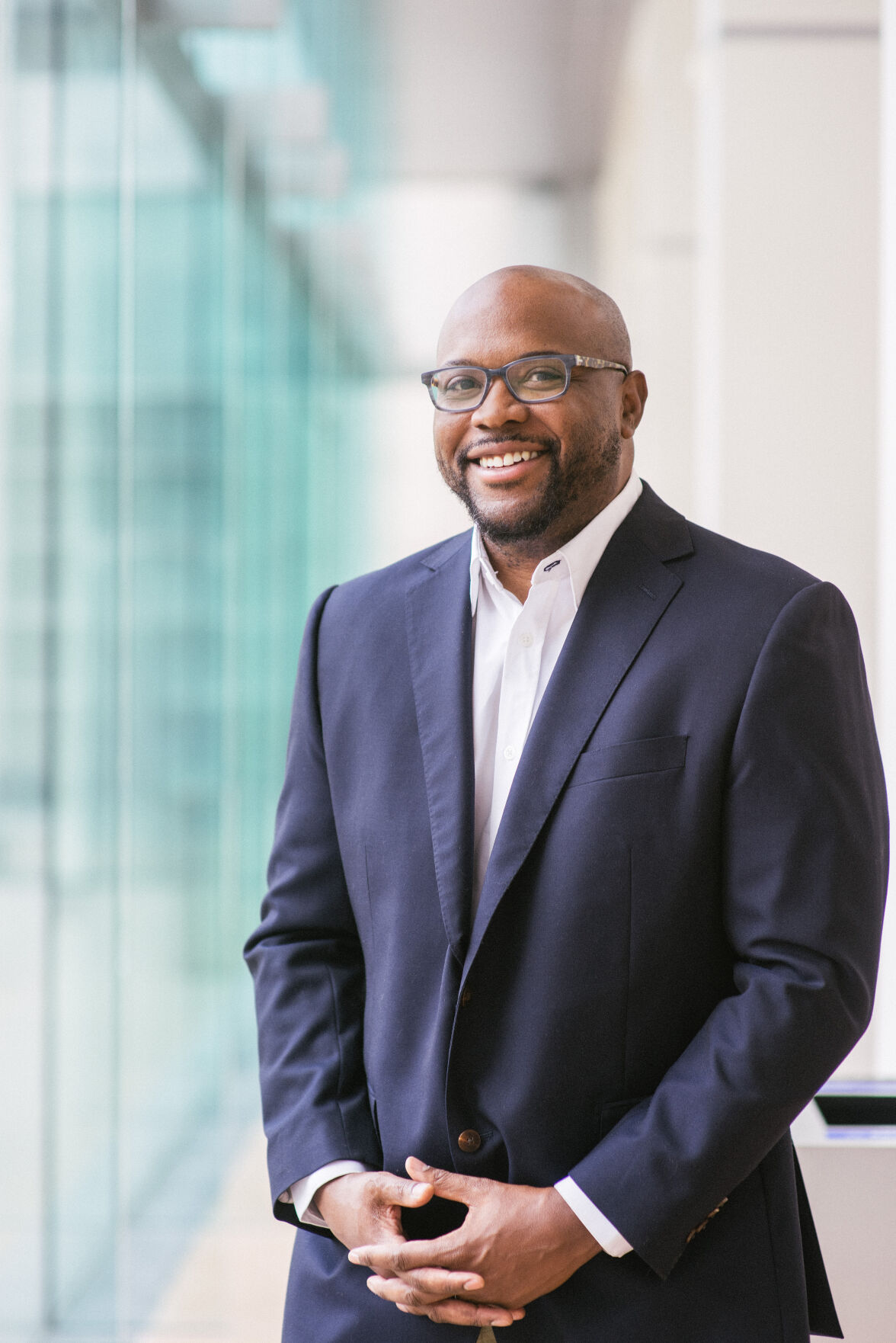 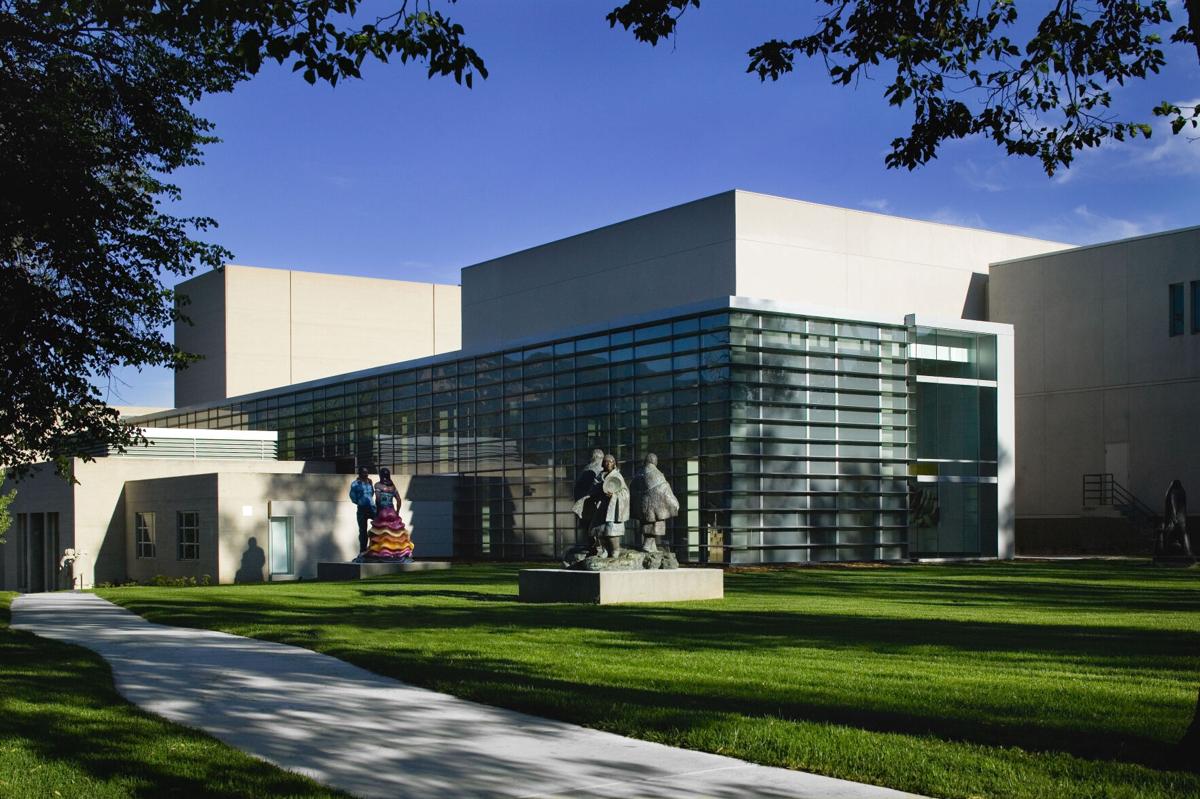 The Fine Arts Center is building an

outdoor stage in its Sculpture Garden. 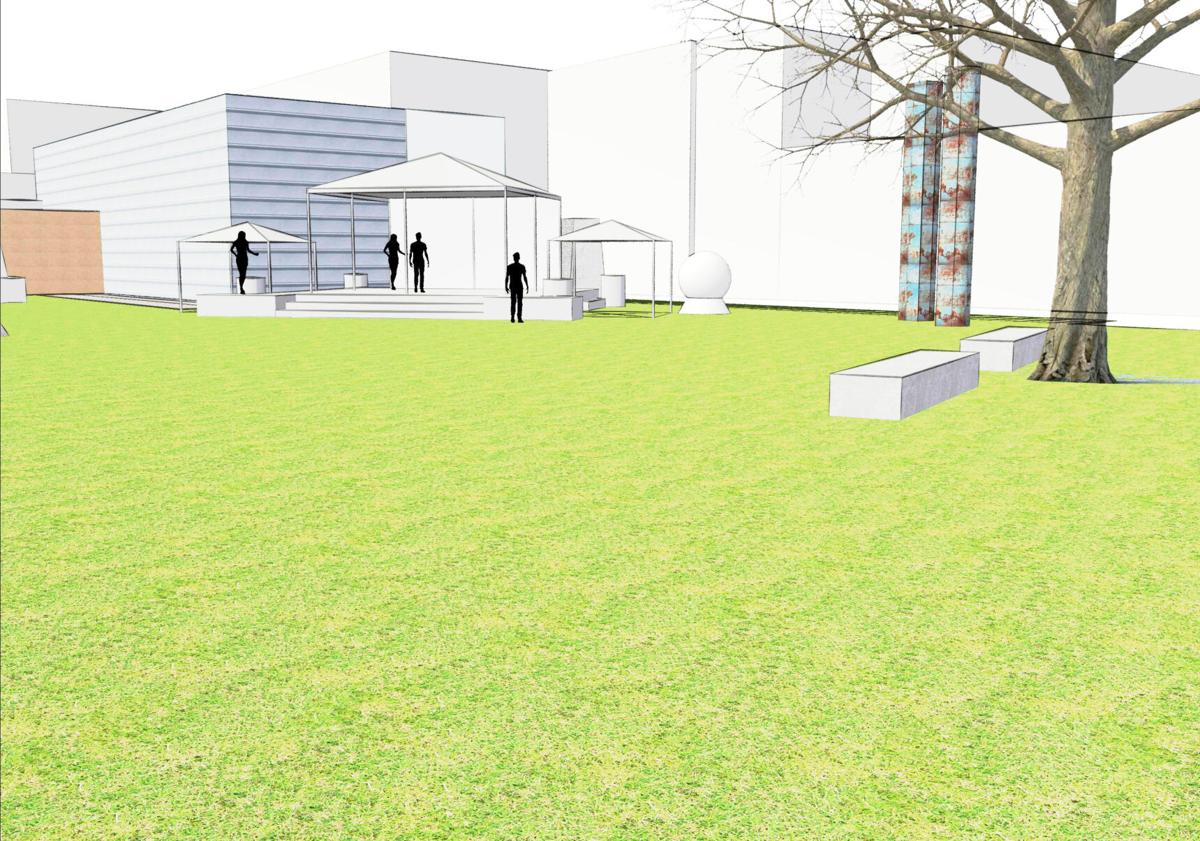 An artist’s rendering of the Fine Arts Center’s

The Fine Arts Center is building an

outdoor stage in its Sculpture Garden.

An artist’s rendering of the Fine Arts Center’s

Idris Goodwin was hired to be a leader for these times. He just could not have known at the time that these times are, well … these times.

On Feb. 5, 2020, Goodwin was named the first person of color to lead the century-old Colorado Springs Fine Arts Center at Colorado College, which includes world-class galleries, the Bemis School of Art and one of the state’s three largest professional theater companies. By May 1, Goodwin’s first official day on the job, the arts center, along with much of the world, was firmly locked down by the pandemic. Then came the George Floyd murder. Then came the “We See You, White American Theater” antiracism movement that is demanding sweeping systemic change toward equity and inclusion from major American arts organizations.

Suddenly the catastrophic pandemic that brought America to a standstill also was providing the new guy with the unprecedented opportunity of time to intentionally rebuild the iconic arts center from the ground up – if not in his own image, then certainly according to his vision.

“We are using this time to really think about what kind of arts institution we want to be in these transformative times,” said Goodwin, himself also a playwright, director, educator and organizer. “And not just by reacting to them. How do we try to lead, and how can we be relevant in this moment?”

One way to make change is by what you put on your stages or on the walls of your art galleries. In the coming weeks, Goodwin will be bringing live theater, dance, music, and more to outdoor locations across Colorado Springs including Acacia Park, Concrete Coyote and local community centers. He is having a new outdoor stage built in the Sculpture Garden for performances of the musical “Working,” based on Studs Terkel’s book; and "Where Did We Sit on the Bus?" Brian Quijada’s one-man play inspired by a third-grade Latino boy asking that very question. Plans also call for live music, art demonstrations, local food trucks, outdoor art classes and all manner of youth activities.

“One of the words that's in our mission statement that I am obsessed with is ‘vitality,’” Goodwin said. “That is 100 percent what the role of the arts and culture space is, to me: To show and exhibit and encourage signs of life.”

But a more permanent way to affect change is to give members of underrepresented communities jobs that come with a salary, benefits and, most important, both a year-round seat at the table and a voice in the daily conversation.

Goodwin himself is part of that change. So too is L. Song Richardson, a Black and Korean woman who will become Colorado College’s 14th President on July 1. Goodwin soon will name both a new Producing Artistic Director for his theater company and a Director of Visual Arts for the museum.

“Those two hires are going to be pretty significant because I am all about empowerment of staff,” he said. With these two new directors – and a lot of the people who already work here every day – my focus becomes, ‘How do I create platforms for big, bold, interesting, innovative, resonant ideas – and then support them relentlessly?”

For Goodwin, “The mission is the North Star,” he said. “It’s not about chasing dollars.”

And one reason it’s not about chasing dollars is because the FAC is aligned with Colorado College, which, Goodwin said, “absolutely helped us, carried us and floated us through the pandemic,” when the FAC lost out on about $500,000 in unrealized revenue. Another reason is that Colorado College just received the largest individual gift in its history – a $33.5 million future estate bequest from an anonymous donor – half of which will go toward the future needs of the Fine Arts Center.

“The most valuable thing about that gift is that it sends a message of sustainability at a time of great change and transition,” Goodwin said. “It is such an amazing vote of confidence from someone out there who is committing to our vision and our future.”

And that vision, Goodwin said, is to build a bigger tent.

“My whole career has been devoted to using storytelling to create opportunities for folks to engage with stories that are outside of the dominant cultural narrative,” he said. “I think that is what art's purpose is. Art has not been immune to the effects of elitism and white supremacy. You have seen communities that are under-represented, genders that are underrepresented, harmful stereotypes and cultural misrepresentation rampant – and the Fine Arts Center hasn't been immune to that. And in the Information Age, people are paying attention to that like never before. Honestly, if Twitter had existed when Harriet Tubman was around, I think we would be a lot further along right now.”

Goodwin appreciates the unicorn he’s riding right now. There might not be another multidisciplinary arts organization in the country that is as robustly supported by a local college, houses a professional year-round theater company, a museum, an arts school and permanent art collections while still fully committed to serving the local community.

“And we are going to do that,” Goodwin said, “by bringing more people into the mix.”

I ended our conversation with a question I've never asked any interview subject before: “What is the headline of your story at this moment in time?” And I gave him a head start: “Idris Goodwin wants to ... fill in the blank."

He pondered the question when it hit him.

"It's what you just said: ‘Idris Goodwin wants to fill in the blanks,’” he said.

“That's it. I want to fill in the blanks of the American story through art."

Denver Gazette contributing arts columnist John Moore is an award-winning journalist who was named one of the 10 most influential theater critics by American Theatre Magazine. He is now producing independent journalism through his own company, Moore Media.